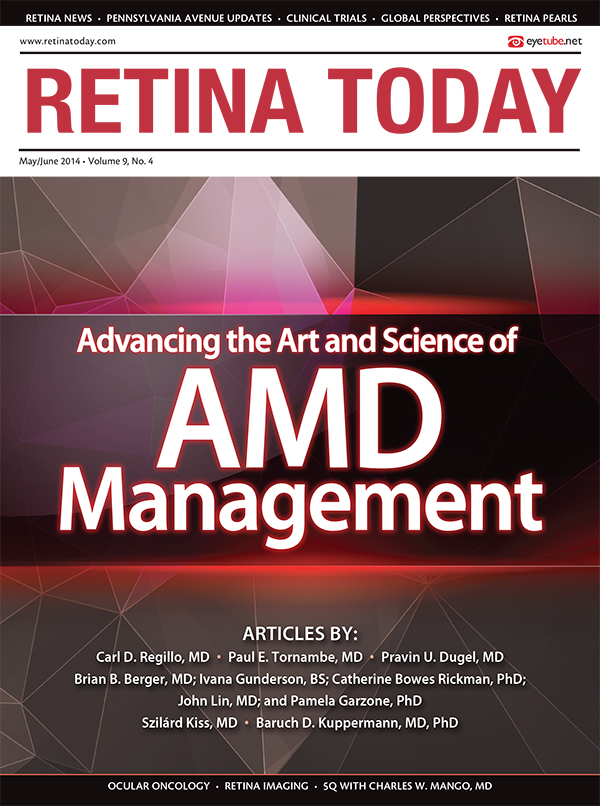 This procedure offers some advantages over current lens rescue methods.

By Jonathan A. Feistmann, MD

In this issue of Retina Today, Jonathan A. Feistmann, MD, demonstrates an efficient way to rescue an IOL that has fallen into the posterior segment. This method can be combined with other methods of IOL scleral fixation.

We extend an invitation to readers to submit pearls for publication in Retina Today. Please send submissions for consideration to Dean Eliott, MD (dean_eliott@meei.harvard.edu); or Ingrid U. Scott, MD, MPH (iscott@hmc.psu.edu). We look forward to hearing from you.

My colleagues and I recently published in Retina a bimanual technique for IOL rescue that uses a modified transconjunctival scleral fixation approach.1 This technique can be combined with recently published methods for IOL scleral fixation, including the sutureless technique that places the haptics in scleral tunnels, as popularized by Scharioth and Pavlidis.2 Our method can also be used with the variation described by Agarwal et al3 that uses fibrin glue, partial thickness scleral flaps, and the handshake technique; the modification described by Prenner et al4 using larger sclerotomies in lieu of scleral flaps for haptic fixation; and the modification described by Prasad,5 wherein the haptics are fixated to the sclera using a transconjunctival approach without conjunctival dissection.

The technique has 3 parts: trocar/cannula setup and positioning, IOL rescue, and haptic fixation.

At the start of the procedure, a Mendez corneal ring is used to find the meridians of the 2 cannulas used to retrieve the haptics, which are placed 180° apart. Although the haptic-retrieving cannulas may be used intraoperatively for purposes other than haptic retrieval, we avoid doing so because we wish to preserve the beveled architecture of the sclerotomies for snug haptic fixation.

Ideally, the IOL should be free of the capsular bag and resting on the retina in a reverse S configuration (Figure 2). If the capsular bag is still in place, it is removed with a vitrector; if the IOL is not positioned properly, it is laid on the retina in a reverse S configuration. Via the haptic-retrieving cannulas, end-grasping forceps are used in the dominant hand to hold the tip of 1 of the haptics while the IOL is lifted to the middle of the vitreous cavity (Figure 3). The forceps in the nondominant hand grasp the second haptic. An assistant threads the cannulas up the shaft of the forceps prior to the surgeon externalizing the forceps and haptics (Figure 4). Both haptics are removed simultaneously.

After externalizing the haptics, we adjust them until the optic is centered and the tilt is minimalized. Vannas scissors are used to open the conjunctiva over the sclerotomy to expose the external portion of the sclerotomy. To make a Scharioth tunnel that originates from the opening of the sclerotomy and is parallel to the limbus, a bent 25-gauge needle is used (Figure 5). End-grasping forceps are used to grasp the haptics directly behind the tip, retract it back slightly into the sclerotomy, and guide it into the Scharioth tunnel. The sclerotomy and overlying conjunctiva are closed using a polyglactin 910 suture on a BV needle. Other sclerotomies are also sutured if they are not self-sealing.

The reliance on chandelier lighting and an assistant to guide the cannulas up the shaft of the forceps prior to haptic extraction are disadvantages to this technique for IOL rescue and haptic fixation. On the other hand, the haptics are removed simultaneously, which avoids anterior segment haptic manipulation and requires fewer overall steps than other techniques.4,5 Additionally, the Scharioth tunnel provides greater haptic support than previously published techniques.

We propose that our method for cannula removal offers additional advantages. Because the cannulas are extracted prior to removing the haptics, the tension on the haptic-optic junction is reduced and the possibility of complete intraoperative haptic retraction is minimized. By using fewer surgical steps, our method decreases the likelihood of haptic disfiguration.

Jonathan A. Feistmann, MD, is an assistant professor of ophthalmology and a retina speicalist at the New York Eye and Ear Infirmary. Dr. Feistmann may be reached at jfeistmannmdpc@gmail.com.