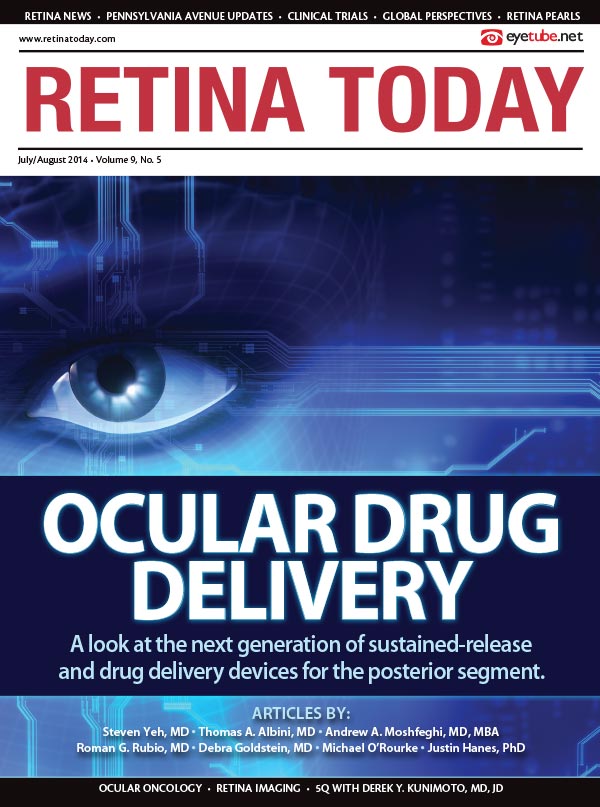 A No-Touch Technique for Removal of a Dexamethasone Implant

The sustained-delivery device can migrate to the anterior chamber if the posterior capsule is compromised.

In this issue of Retina Today, John D. Pitcher III, MD, describes a viscoelastic-based technique for removing a dexamethasone implant that has migrated to the anterior chamber.

Corticosteroids are widely used in the treatment of a variety of ophthalmic inflammatory conditions. Depending on the ocular pathology to be addressed, steroids can be administered systemically, topically, via intravitreal injection, or, most recently, via a sustained-release intravitreal implant. A dexamethasone intravitreal implant (Ozurdex, Allergan) was approved by the US Food and Drug Administration (FDA) in 2009 for the treatment of macular edema following retinal vein occlusion and has subsequently received approvals for treatment of noninfectious posterior uveitis and for use in patients with diabetic macular edema (DME) who are pseudophakic or scheduled for cataract surgery.1

The implant consists of 0.7 mg dexamethasone formulated in the Novadur solid polymer drug delivery system, a rod-shaped PLGA polymer matrix designed to be injected into the vitreous with an applicator. The PLGA matrix degrades to lactic acid and glycolic acid.1

The safety and efficacy of 1 or 2 treatments with the dexamethasone implant over 12 months were evaluated in a phase 3 clinical trial in patients with macular edema secondary to branch or central retinal vein occlusion.2 In that population, the implant had a favorable safety profile. Cataract progression occurred in 29.8% of eyes that received two 0.7 mg implants over 12 months, and cataract surgery was performed in 1.4% of these eyes. A rise in intraocular pressure of 10 mm Hg or more from baseline was seen in 12.6% of eyes after the first implant and 15.4% after the second. IOP increases were usually transient and were controlled with medication or observation.2

There is potential for a sustained-release intravitreal implant to be of value after vitrectomy, due to concerns that the lack of the vitreous body causes intravitreally injected drugs to be cleared faster than in normal eyes. The dexamethasone implant was evaluated in the treatment of DME in vitrectomized eyes.3 In that 26-week, open-label study, the implant led to functional and anatomic improvements in difficult-to-treat vitrectomized eyes with an acceptable safety profile. Most adverse events in the study were related to the intravitreal injection and resolved without complications.

Not long after the dexamethasone implant became available, reports began to appear of migration of the implant into the anterior chamber.4-11 Most of these were single case reports or small case series.4-10 Most authors describe a pseudophakic patient or a patient with complex ocular pathology who received the dexamethasone implant and subsequently presented with the implant in the anterior chamber. In some but not all cases, the event is accompanied by corneal edema or decreased vision. Associated corneal edema and/or decreased vision may be resolved after the implant is removed or repositioned in the posterior segment. In at least 1 case, edema did not resolve, and the patient required a corneal transplant.7 Several authors note the difficulty of moving or removing the friable implant, especially one that has been in the eye for a considerable period of time. Khurana et al reported a retrospective series of 15 patients who experienced 18 episodes of migration of the dexamethasone implant.11 Migration occurred in 6 patients who were aphakic, 4 with an anterior chamber IOL, 2 with a scleral-fixated posterior chamber IOL, 2 with a posterior chamber IOL, and 1 with an iris-fixated posterior chamber IOL. All 15 patients had previously undergone vitrectomy, and 14 had no lens capsule.

In 14 patients in the series of Khurana and colleagues, corneal edema developed. Of these patients, the edema did not resolve in 10, and 6 required corneal transplant. Earlier intervention reduced the risk of permanent edema. These authors concluded that absence of the lens capsule and prior vitrectomy are risk factors for migration of the dexamethasone implant into the anterior chamber. They note that, in 2012, the FDA required a change to the implant’s label, including a precaution in aphakic eyes and those with a rupture of the lens capsule.11 Corneal edema in these cases is presumed to be due to toxicity of the vehicle to the corneal endothelium. The active ingredient, dexamethasone, in the same PLGA matrix, was found to be safe and effective when evaluated as an anterior chamber implant to reduce inflammation after cataract surgery (Surodex, Oculex Pharmaceuticals), although at a much lower dose (60 μg for Surodex, 7.0 mg for Ozurdex).12

Many of the case reports cited above describe a method used to reposition or remove the implant from the anterior chamber. The implant changes to a brittle or friable consistency over time in eye. Grasping the implant can lead to its fracture (Figure 1), and aspiration can cause dispersion of the material. It is difficult to know whether efforts to remove the whole implant have been successful, especially after it has been in the eye for several weeks. In addition, authors note that the implant can be pushed back into vitreous, but the likelihood of repeat migration remains.

A no-touch, viscoelastic-based technique facilitates removal of the dexamethasone implant from the anterior chamber without fragmentation. The technique is economical, with no need to open vitrectomy or phacoemulsification packs. It also ensures that no vehicle particles are left behind after the intervention. A description of the technique follows.

The procedure can begin with intracameral injection of acetylcholine chloride to constrict the pupil and avoid intraoperative dilation, which would increase the risk of losing the implant back into the posterior chamber. A 2.75-mm keratome is used to create a clear corneal incision across the anterior chamber from the implant (Figure 2). The incision can be enlarged slightly to 3 mm if needed. The rod-shaped implant is often lying in the angle, oriented perpendicular to the keratome blade. Positioning the incision opposite from the implant gives the surgeon space to reorient the device.

A viscoelastic cannula is inserted through the incision, and viscoelastic material is injected to inflate the anterior chamber. Either a dispersive or cohesive viscoelastic agent can be used, but the latter is easier to remove at the end of the case. If the initial choice of material is ineffective, the surgeon may consider using a more viscous product such as Healon5 (Abbott Medical Optics) in subsequent maneuvers.

These maneuvers facilitate delivery of the implant in 1 piece without any residual material inside the eye (Figure 5). Once the implant has exited the eye, the chamber is thoroughly irrigated with balanced salt solution to be sure that all viscoelastic is removed to avoid postoperative pressure spikes (Figure 6). The incision is checked to ensure there are no leaks. The wound may be sutured with 10-0 nylon if any evidence of potential leakage is seen.

Despite the manufacturer’s warning against the use of the dexamethasone implant in eyes with a compromised lens capsule, cases of migration into the anterior chamber will continue to be seen. Many surgeons have commented on the challenges of removing these implants in their entirety due to their friability, especially when they have been in the eye for some time. This no-touch technique facilitates removal of the implant safely and completely, in a single piece, without manipulation and the risk of dispersing the components of the implant.

John D. Pitcher III, MD, is a recent graduate of the vitreoretinal fellowship at Wills Eye Hospital, and is joining the Eye Associates of New Mexico in Albuquerque, New Mexico. Dr. Pitcher may be reached at johndpitcher@gmail.com.