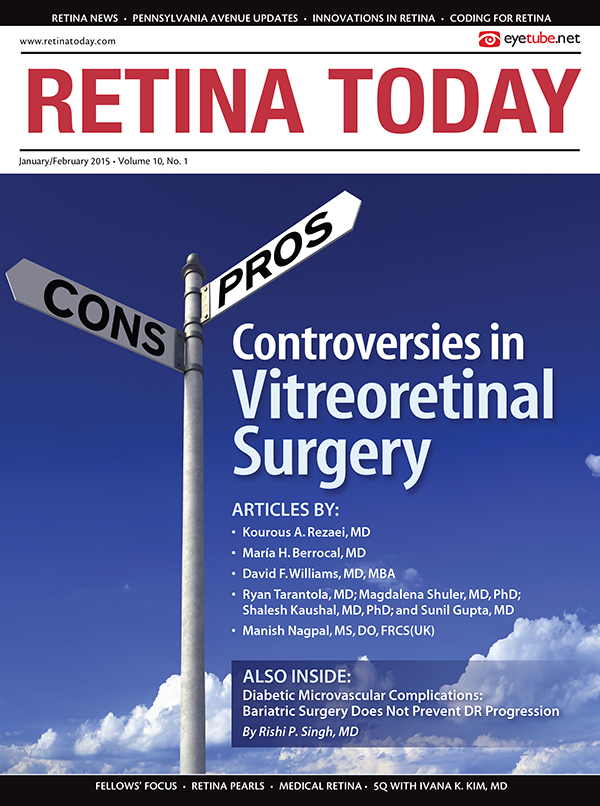 According to the report, a scarcity of qualified examiners to perform bedside binocular indirect ophthalmoscopy—which is further complicated by regional differences in the availability of such examiners—has led to increased interest in the use of telemedicine-based remote digital fundus imaging (RDFI-TM) evaluation techniques. Several studies, including the recent e-ROP study,2 support the use of fundus imaging to supplement face-to-face evaluations. According to the report, images could potentially be digitally transmitted to centralized evaluators, thus extending the care network individual physicians can provide, while, among other benefits, limiting liability exposure should vision loss occur despite appropriate care.

RDFI-TM techniques may not be a complete substitute for bedside indirect ophthalmoscopy, according to the report, but they can at least be used as a first step to identify infants in need of further physical evaluation.

In reviewing the current literature, the report noted that level 1 evidence exists from at least 5 studies demonstrating the accuracy of digital retinal photography for the evaluation of ROP. However, the authors also suggested that further research is needed to evaluate whether RDFI-TM programs “adequately address issues of access to care, clinical efficacy, and cost-effectiveness. These investigations should address protocol and performance standards.”

The joint technical report also outlines practical considerations that should be reviewed by entities thinking about incorporating an RDFI-TM protocols, as well as a discussion of managing risks associated with the use of telemedicine in ROP evaluation.

FDA to Expedite Review of Anti-VEGF Drugs for Diabetic Retinopathy

The US Food and Drug Administration (FDA) has granted “breakthrough therapy” designation for ranibizumab (Lucentis, Genentech) for the treatment of diabetic retinopathy (DR).

The designation, granted to medications intended to treat a serious or life-threatening disease or to medications for which preliminary clinical research suggests a significant improvement versus existing therapies, means that the process of review for ranibizumab for DR will be expedited. The FDA’s confirmed action date is February 6.

If the indication for ranibizumab is expanded, it will be the first ocular drug approved to treat patients with DR.

Users have access to high-definition OCT images that appear in the microscope eyepiece of the Lumera 700 (Zeiss). The new device allows surgeons to see transparent structures in the anterior and posterior segments of the eye.

The European Committee for Medicinal Products for Human Use has recommended approval of aflibercept for treatment of visual impairment due to macular edema secondary to branch retinal vein occlusion (BRVO). The drug is already approved in the European Union for treatment of macular edema secondary to central retinal vein occlusion (CRVO).

Aflibercept is approved in the United States for the treatment of neovascular age-related macular degeneration (AMD), macular edema following CRVO or BRVO, and DME. The drug is approved in European Union for neovascular AMD and DME.

Aldeyra Therapeutics has submitted an Investigational New Drug (IND) application to the FDA to conduct phase 2 clinical testing of it drug NS2 for the treatment of noninfectious anterior uveitis.

The FDA must approve the IND application before the commencement of phase 2 clinical trials.

NS2 is designed to trap free aldehydes in patients diagnosed with noninfectious anterior uveitis. “NS2 has the potential to reduce or eliminate the use of steroids in the treatment of this disease, which we believe would significantly enhance the treatment options for these patients and improve their long-term ocular health,” Todd C. Brady, MD, PhD, president and chief executive officer of Aldeyra, said in a press release.

Under the agreement, Hanmi received a license from Allegro for ALG-1001 as an intraocular injection for vitreoretinal diseases such as DME, wet AMD, and vitreomacular traction. The license rights are for South Korea and China. ALG-1001 is currently in multiple phase 2 trials.

In patients with exudative AMD that received anti-VEGF treatment, 93.2% showed visual stabilization or improvement 5 to 7 years after initial treatment, according to a study published in Ophthalmology.1

A single-practice retrospective chart review examined 109 patients with exudative AMD that received continuous fixed-interval dosing (every 4-8 weeks) of aflibercept, bevacizumab (Avastin, Genentech), or ranibizumab for at least 5 years. All patients received at least 6.5 injections per year; they averaged 10.5 injections per year.

None of the top-selling ocular supplement brands replicate the exact doses contained in AREDS or AREDS2 nutraceuticals, according to a study published in Ophthalmology.1

Researchers also investigated the labeling of the 5 brands in the study. They said that although “individual supplements claimed to ‘support,’ ‘protect,’ ‘help,’ or ‘promote’ vision and eye health … none specified that there is no proven benefit in using nutritional supplements for primary prevention of eye disease.”

The researchers said that these findings underscored “the importance of ophthalmologists educating their patients on the evidence-based role of nutritional supplements in the management of eye health.”

Second Sight has announced an exclusive distribution agreement in Turkey, and its Argus II retinal prosthesis has been approved for use by Health Canada, the country’s regulatory agency.

Second Sight’s agreement with Erisci Elektronik, a Turkish distribution company, grants exclusive distribution rights for the Argus II. Applications have been submitted to Turkey’s social security institution in order to secure reimbursement for the device. Reimbursement coverage is expected in late 2015.

CenterVue released the Eidon imaging system, a fully automated retinal imaging system employing confocal scanning and true-color imaging. Through confocal imaging and white light illumination, the Eidon provides improved contrast and image quality compared with a traditional fundus camera. The device is capable of imaging the central retina and periphery and offers a viewing angle of 110°. The imaging modalities available are true-color, red-free, and infrared.

Nidek has released the Retina Scan Duo OCT. The device combines a high-definition OCT and fundus camera into a single system. It also features 3-D autotracking and autoshot. Following alignment, an OCT and color fundus image can be captured in a single shot. n