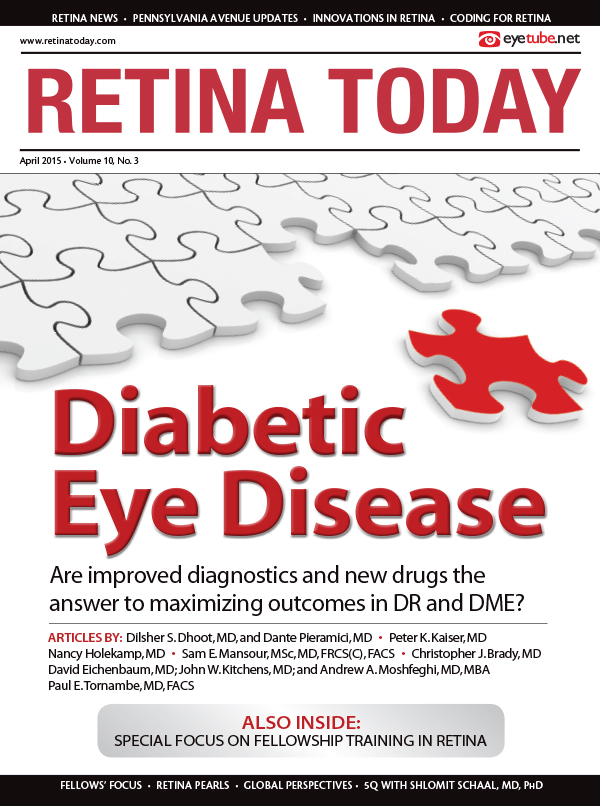 The Role of Corticosteroid Implants in DME

Sustained-release platforms offer an alternative solution for patients with inadequate or no response to anti-VEGF therapy while addressing important compliance issues.

Anti-VEGF drugs are appropriately considered first line therapy for patients with diabetic macular edema (DME). A wealth of study data, most notably the recently published DRCR.net Protocol T study,1 affirm the safety and efficacy of these agents in many patients. However, within the various clinical trials studying anti-VEGF therapy for treatment of DME, including the Protocol T study, there are appreciable numbers of patients who do not respond to or have an incomplete or inadequate response to active therapy regardless of the agent used.

Among patients for whom anti-VEGF therapy is incompletely effective, there may be a role for alternative therapy modalities, and, in particular, for corticosteroid therapy. Two sustained-release corticosteroid implants are approved in the United States for use in patients with DME: the fluocinolone acetonide intravitreal implant 0.19 mg (Iluvien, Alimera Sciences) and the dexamethasone intravitreal implant (Ozurdex, Allergan). The fluocinolone acetonide implant is nonbioerodible and is designed to release corticosteroid continuously at submicrogram levels for 36 months. The dexamethasone implant is bioerodible and releases drug for approximately 90 to 120 days. As well, there are two corticosteroids, Kenalog and Triesence (Alcon), that can be injected intravitreally, but neither is approved by the US Food and Drug Administration (FDA) for use in patients with DME.

There may be several advantages to using corticosteroids in patients with DME, including that these drugs may be more efficacious in certain patients; they may address an underlying pathophysiology that is not necessarily VEGF-mediated; and they may address a compliance issue that can be a barrier to effective therapy.

In a sense, anti-VEGF agents are both therapeutic and diagnostic in patients with DME. The underlying pathophysiology of DME is in large part VEGF-mediated. However, there is a growing appreciation that inflammatory mediators are active in the underlying disease process and in particular that they contribute significantly to vascular permeability and edema. There is evidence to suggest that the late phase of DME in particular may be more driven by inflammatory than angiogenic mediators.

This second disease pathway may explain why some patients demonstrate an inadequate response to anti-VEGF therapy. The question is, what do we do for these patients? Data suggest that continued anti-VEGF therapy may eventually engender a response.2 However, this strategy may expose patients to an impressive number of injections with unimpressively slow results. In addition, continued anti-VEGF therapy without resolution of the anatomy may in and of itself create a chronic type of DME that responds poorly to a second and now delayed treatment strategy wherein patients never achieve the visual outcomes they would have derived with earlier intervention.

There are compelling data from an analysis of the DRCR.net Protocol I study suggesting that patients will typically display an identifiable response with the first four injections of anti-VEGF therapy.3 In this study, patients were ultimately grouped into categories of patients who responded to the particular anti-VEGF agent being studied as either early and consistent or early but inconsistent; slow and variable; or nonresponders (Tables 1 and 2). Overall, about a quarter of patients were nonresponders and more than half did not have an early response.3

These data are reinforced by findings of subgroups of patients within the Protocol T study, and within VIVID and VISTA4 and RISE and RIDE,5 who were non- or incomplete-responders to anti-VEGF therapy.

Cumulatively, all these data suggest that there are three categories of patients with DME: (1) those with disease that is predominantly VEGF-mediated, and who therefore will derive great benefit from anti-VEGF therapy; (2) those in whom the disease is not predominantly VEGF-mediated, and who therefore will not benefit from anti-VEGF injections; and (3) those in whom there are both VEGF-mediated and inflammatory processes at work.

These latter two categories would likely benefit from corticosteroid therapy, whereas the last group may require a combination approach that takes advantage of the beneficial properties of both anti-VEGF injections and corticosteroids.

As mentioned previously, there are several options within the corticosteroid class for treatment of DME. There are two formulations of triamcinolone acetonide that can be used for intravitreal injection—one of which, Kenalog, has specific labeling from the FDA indicating that it is not for intraocular use. The other agent, Triesence, is FDA-approved for unusual orphan indications in ophthalmology, such as giant cell arteritis and sympathetic ophthalmia, but is not labeled for use in DME.

There are also two FDA-approved sustained release corticosteroid implants: the dexamethasone intravitreal implant, which lasts for about 3 to 4 months, and the fluocinolone acetonide 0.19 mg implant, which lasts for 36 months. The advantage of these implants, aside from providing a more predictable pharmacokinetic profile than bolus intravitreal injections—and that they have an FDA indication for DME, which is no small consideration—is that they address a compliance issue that is not insignificant among patients with DME (discussed further below).

Both implant modalities are associated with two important safety concerns: cataract development and the risk of elevated intraocular pressure (IOP). For pseudophakic patients, cataracts are not an issue. In clinical trials of the implants, phakic patients in FAME6 (fluocinolone acetonide intravitreal implant 0.19 mg) and MEAD7 (dexamethasone intravitreal implant) who went on to require cataract surgery had favorable outcomes with that surgery. This may have been at least in part because having the steroid on board at the time of cataract surgery helped reduce postsurgical inflammation, as well as reducing flare-ups of DME, a known phenomenon among patients with diabetes who undergo cataract surgery.

There was an appreciable risk of rise in IOP in both FAME and MEAD. About 38% of patients in FAME experienced rises in IOP and 42% of patients in MEAD were subsequently treated with IOP-lowering medications. However, no patients in MEAD required incisional surgery related to steroid-induced IOP increase, and only one patient in FAME demonstrated signs of glaucoma.6,7

Within the MEAD study, patients who experienced a rise in IOP did so typically about 6 to 8 weeks after receiving the implant.7 These IOP elevations were manageable with topical therapy, in most cases requiring only one medication. Steroid response was also predictable, in that, if patients experienced a rise after the first implant, one could expect that same response over and again as further treatment was delivered; and, vice versa, if a patient did not have an IOP rise after initial implantation, it would be unlikely he or she would be a responder after subsequent injections.

TREATMENT FOR THE SAKE OF COMPLIANCE

Patients who do not experience functional or anatomic improvement after receiving anti-VEGF agents are one kind of nonresponder. A second, equally important classification of patients with suboptimal response to therapy is those in whom monthly or even as-needed (PRN) or treat-and-extend (TAE) therapy is not achieved because of poor compliance with the intensive treatment schedule.

The fact is that some patients will not or cannot comply with the dosing regimens needed for anti-VEGF therapy, and modified dosing strategies may be insufficient to address this reality. Within a PRN schema, patients are still visiting the clinic up to 12 times a year for either serial OCT imaging or to receive an injection. The intent of TAE is to extend the interdose interval, thereby reducing the volume of clinic visits. Yet even this may not be enough.

In the Protocol T study, patients received, on average, nine injections under a TAE treatment paradigm. In the real world, nine visits a year to an ophthalmologist is a lot. Diabetic patients have, on average, 25 doctor office visits per year.8 Reasonably speaking, what happens when we ask patients who are visiting a doctor’s office twice a month already to also come to our retina clinics nine to 12 times a year for anti-VEGF injections or monitoring?

There is a strong rationale for corticosteroid therapy for selected patients with DME who are not responsive to anti-VEGF therapy or are unable or unwilling to comply with the associated treatment demands. It is important to note that, despite the proven efficacy of anti-VEGF therapy for DME, some patients may have a disease process that is activated more so by inflammatory mediators than by the VEGF pathway.

There are two corticosteroid implants approved for treatment of DME, and this approval should provide confidence in their use for this indication. Clinical trials for these sustained-release platforms demonstrated that they were safe and effective; however, there were noted side effects related to cataract development and potential for IOP elevation. These side effects should command our attention in following the patients for whom we choose to use these platforms, but they should not dissuade us from their use. n

Nancy Holekamp, MD, is director of retina services with Pepose Vision Institute in St. Louis, Missouri. Dr. Holekamp may be reached at nholekamp@gmail.com.