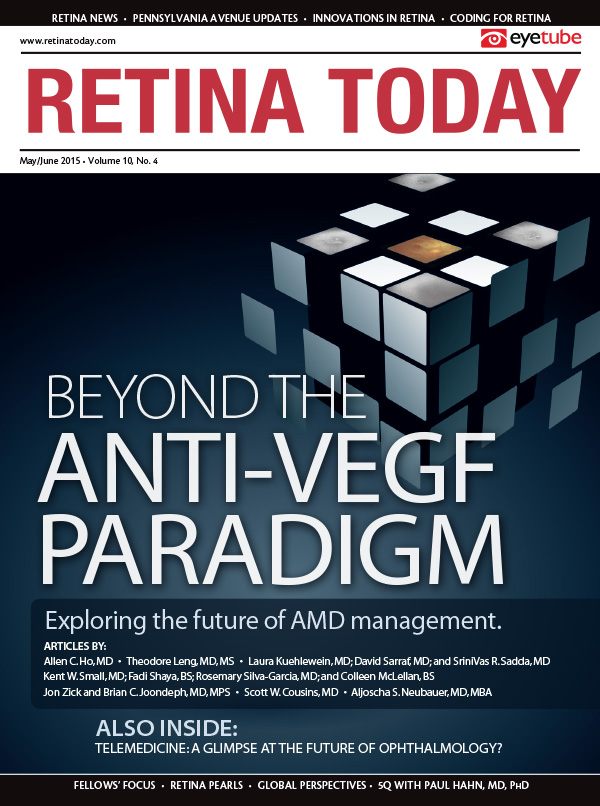 A retrospective chart review of cases suggests a rationale for combination therapy in patients with age-related macular degeneration.

• Despite the low complication rate associated with anti-VEGF injections, they can contribute to vision-threatening sequelae.
• A retrospective chart review of cases treated with combination anti-VEGF and photodynamic therapy showed similar outcomes with combination therapy compared with anti-VEGF monotherapy, but with fewer treatments.
• Use of combination therapy in selected cases may be a viable strategy to reduce treatment burden, maximize therapy for certain patients, and reduce the risk of inducing complications.

Standard treatment options for neovascular age-related macular degeneration (AMD) include photodynamic therapy (PDT) and intravitreal injection of anti-VEGF agents.1 Studies have shown that anti-VEGF monotherapy is more effective than PDT2; however, anti-VEGF injection intervals ranging from 4 to 8 weeks are usually required in order to control neovascular membranes in wet AMD.

When intravitreal injections are performed properly, the overall risk for associated complications is low. Yet some complications of anti-VEGF injections (eg, retinal tears, as well as more serious complications such as retinal detachment, vitreous hemorrhage, uveitis, and endophthalmitis) can be associated with severe vision loss.2-4 Studies suggest that visual acuity (VA) outcomes are comparable between anti-VEGF monotherapy and combination treatment with anti-VEGF therapy plus PDT, and that combination therapy requires significantly fewer interventions.2,5

We conducted a retrospective study to assess the effect of a combination approach on the overall need for AMD treatments and the potential for ocular and systemic complications.

This retrospective chart review included 29 eyes of 26 patients at two locations of a solo retina specialty practice in Los Angeles, California. Patients were selected for review if combination treatment with an anti-VEGF injection (bevacizumab, Genentech) and PDT effectively halted the growth of neovascular membranes and obviated the need for further treatments in one or both eyes for at least 1 year. Charts included in the analysis consisted of patients treated within the previous 5 years.

Institutional Review Board approval for this study was obtained. Collected data included VA, central retinal thickness, intraocular pressure (IOP) and history of glaucoma, date of wet AMD onset and treatment history, concomitant use of anticoagulants, and history of or development of cerebrovascular or cardiovascular disease. VA was measured using Snellen charts, and optical coherence tomography (OCT) was performed using either Stratus OCT 3000 (Carl Zeiss Meditec AG) or Opko SD-OCT (Opko Health). IOP was measured by applanation tonometry. IOP readings and glaucoma medication use prior to effective combination therapy and yearly afterwards for up to 5 years were noted to account for whether eyes were being treated for concomitant glaucoma and wet AMD. Additional documentation was also logged, including patient age at time of effective combination therapy, total number of anti-VEGF injections and PDT received per study eye throughout the review period, and concomitant use of anticoagulants such as aspirin, clopidogrel, warfarin sodium, or a combination of any of those preparations. Descriptive statistical analyses were performed, as the dataset was too small for meaningful comparative statistical analyses. 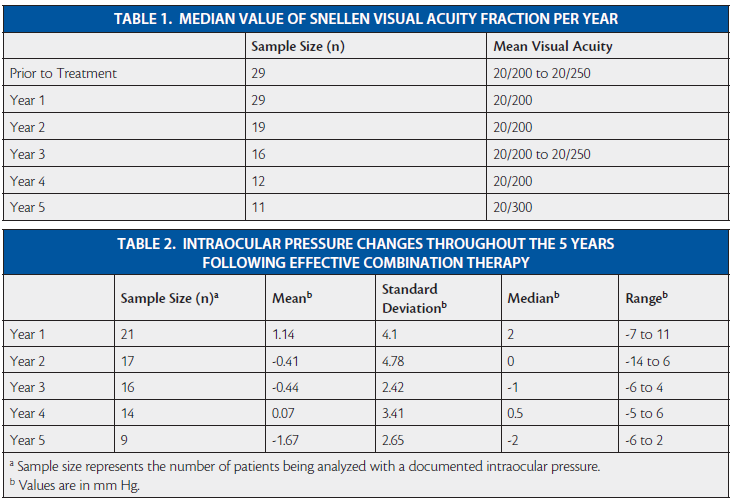 Eight of 29 eyes studied were in four patients with bilateral exudative AMD. The overall mean age at the time of effective combination therapy (PDT plus anti-VEGF therapy) was 80.2 years (range: 67-92 years). Prior to effective combination therapy, the study eyes on average were treated with five anti-VEGF injections (range: 1-18) or two PDTs (range: 1-8) as monotherapy. Most eyes had large chronically active choroidal neovascular membranes (CNVMs). Monotherapy was administered for an average of 16.13 ± 17.35 months before the CNVMs were stabilized by combination therapy and required no further treatment for at least 1 year. 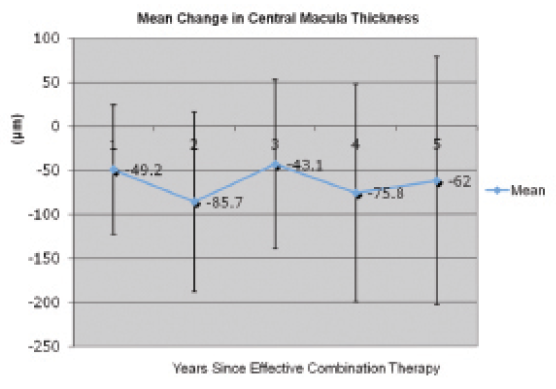 Figure. Mean value of the changes in central macular thickness (expressed in microns and measured by OCT) by year.

In managing any disease, one goal is to achieve the best outcome possible for the patient with the fewest interventions, thereby minimizing risk. Combination therapy of anti-VEGF injection plus PDT may offer such a possibility for patients with neovascular AMD.

Between 2005 and 2008, nearly 21 000 anti-VEGF injections were administered to 6154 Medicare patients 68 years old and older, an age group that is anticipated to more than double in size by 2040.4,6 Treatment with anti-VEGF medications has been a great advance in managing patients with wet AMD; nonetheless, it has also engendered an increase in health care expenditures.7 Besides the financial concern, the need for frequent injections places a burden on patients, families, and physician offices.

Most complications from anti-VEGF injections are rare. However, new data suggest that these treatments are associated with an increased risk of glaucoma in addition to the risks mentioned in the introductory paragraphs. One study found that, after two or more intravitreal anti-VEGF injections, an IOP elevation of greater than 5 mm Hg from baseline becomes more likely.8 We believe there may be supporting evidence for this finding in our chart review: Three fellow eyes started glaucoma treatment while receiving anti-VEGF intravitreal injections during the review period, suggesting that secondary glaucoma may have been related to the injections. Secondary glaucoma and the other aforementioned side effects should be substantial factors in determining the duration and frequency of a patient’s care for exudative AMD.

Combination treatment in cancer, utilizing multiple agents that attack different pathways, facilitates better outcomes while decreasing risks and side effects. Cancer chemotherapy can be equivalent to a “1 + 1 = 3” scenario while decreasing risk. The combination therapy described above seemed to limit the risks and chronic exposure to anti-VEGF agents while achieving at least similar visual outcomes as monotherapy.

Considerable attention has been directed to the systemic risks of anti-VEGF therapies. In our relatively small study, we found no new events of cerebrovascular accidents or ischemic heart disease in the years observed after effective combination therapy, with the exception of one case of new onset atrial fibrillation. The risk of these adverse events has been reported to be higher in PDT monotherapy than in anti-VEGF injection monotherapy.9 Further research is needed to determine whether the benefits of combination therapy for exudative AMD may outweigh the slightly increased risk of stroke or heart attack with PDT.

We also found no evidence of interaction with aspirin use. Thirteen of our patients were using aspirin prior to, during, and following combination treatment. We found no evidence that aspirin contributed to any adverse outcomes.

The obvious weaknesses of this study include its relatively small size, its retrospective nature, and the fact that we do not have the total number of patients treated with combination therapy as a denominator. Without a denominator, we are unable to provide a success rate, and this may introduce a selection bias.

However, the major point of this study is that, despite the negative results of the DENALI and MONT BLANC studies,10,11 there are a significant number of patients who do well with combination therapy in real-world experience. At 12 months in the MONT BLANC and DENALI studies, noninferiority of combination treatment over anti-VEGF monotherapy was not demonstrated. The fact that these studies found no statistically significant evidence of noninferiority does not mean that noninferiority does not exist; it could indicate that the studies were not significantly powered to detect the treatment effect. As with any prospective randomized trial, MONT BLANC and DENALI provided general guidelines based on their specific study design. These can have limited application to the real-world experience.

It should be noted, although not mentioned in the data presented above, that many of our subjects had CNVMs larger than 6000 µm in diameter, and most were predominantly occult. This severe clinical presentation was particularly common at the time when anti-VEGF therapy was becoming the predominant treatment strategy, when patients commonly had received no prior treatment for their AMD. Some of the lesions in our study population had diameters larger than 8000 µm, necessitating multiple slightly overlapping PDT laser spots. In other words, these were some of the worst wet AMD patients seen in our practice. These patients had little hope for improvement or even stabilization with anti-VEGF monotherapy. We found trying to calculate the lesion size and the percentage of the CNVM lesion that was classic to be unrewarding, time-consuming, and generally unnecessary. Also not mentioned in the data above is that we used reduced fluence PDT (by reducing power, not time) within 1 week of the anti-VEGF injection.

It is disheartening that current retina fellows seem to have less training in PDT and that doctors are not using PDT as often as anti-VEGF injections because of the cost and inconvenience. Additionally, lasers for PDT are becoming progressively more difficult to obtain.

However, in our study, treatment of patients with combination PDT and anti-VEGF injections resulted in outcomes equivalent to those with anti-VEGF monotherapy but with fewer treatments. For us, this result outweighs the cost and added inconvenience of PDT. Much like oncologists using combination chemotherapy against cancer, we must attempt to utilize multiple treatment modalities attacking different pathways until we find the best and most efficient therapy.

Most pharmaceutical studies in AMD seem to focus on comparing monotherapy with a particular agent versus monotherapy with an alternative agent. Once an agent is approved by the FDA, physicians tend to get stuck in the monotherapy mode established by the design of the pivotal trial. We must break out of this fixed and static mode of thinking and be interested in and willing to try different combinations of treatments. Perhaps genotyping trial subjects for AMD risk alleles might reveal other factors favorable for response to combination therapy. n

Colleen McLellan, BS, was a research analyst at Macula and Retina Institute at the time this article was written.

Rosemary Silva-Garcia, MD, was the manager and research coordinator at Macula and Retina Institute at the time this article was written.

Kent W. Small, MD, is the owner and operator of Macula and Retina Institute in Glendale, California. Dr. Small may be reached at +1-818-552-5040 or kentsmall@hotmail.com.

Fadi Shaya, BS, is the research/study coordinator at Macula and Retina Institute. Mr. Shaya may be reached at fadis@macularetina.org.

None of the authors have conflicting interests to disclose. A small investigator-sponsored trial grant was provided by Valeant Pharmaceuticals International Inc.