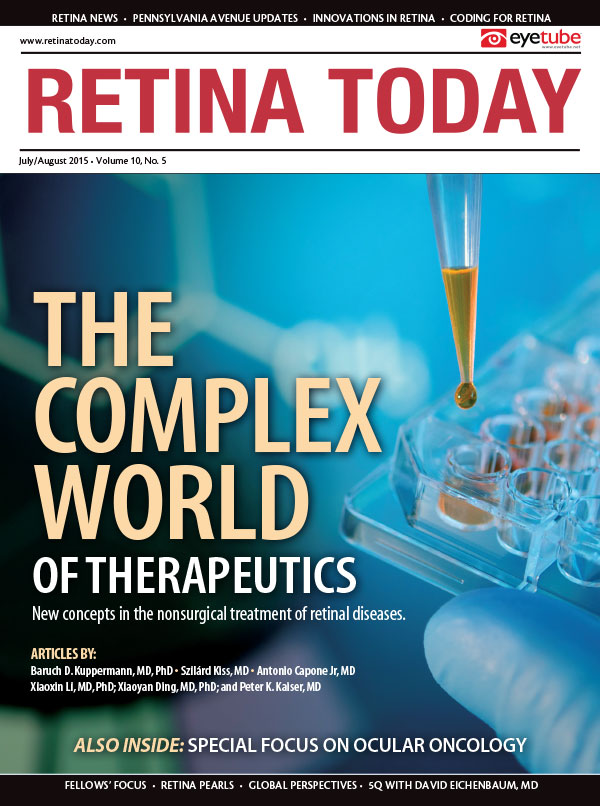 Laser Use and the Future of Retina Practice

Recent findings support the combination of pharmacologic and laser therapies for retinal diseases.

• Although pharmacologic therapy provides excellent results in the treatment of diabetic macular edema, roughly half of patients will require supplemental laser.
• Because it does not cause collateral damage in the retina, subthreshold laser therapy may produce better visual acuity results than conventional laser.
• Laser therapy remains the primary therapy for patients with remote macular edema.

The number of available options for treating diseases of the posterior segment continues to grow, and the technologies behind these options are ever changing and improving. It is only natural, then, to question whether any of the old options and technologies will eventually fall by the wayside. As far as the use of lasers goes, it is here to stay—at least for the foreseeable future. The role of lasers in the treatment of diabetic macular edema (DME) alone is proof enough.

A COMPARISON OF TREATMENT METHODS

DME is one of the major causes of significant visual acuity loss in working-age adults and is the most common cause of visual acuity loss from diabetic retinopathy. For years, the standard therapy was focal laser photocoagulation, but the tide has changed, and many surgeons now begin treatment with intravitreal injection of a pharmacologic agent.

Recent studies have shown that monotherapy with intraocular injections of anti-VEGF agents has the potential to stop the deterioration of vision in patients with DME and even reverse it.1,2 This approach, however, requires multiple and frequent treatments. Furthermore, after the effect of the medication wears off, the leakage recurs and macular edema returns.

Laser therapy, by contrast, may yield a more permanent effect on the retina and retinal blood vessels. Nevertheless, studies have shown that the ability of laser as monotherapy to maintain or improve visual acuity is limited, possibly because of the development of retinal scars, which decrease the potential for improved visual acuity.3-5

Clinical trials such as RISE, RIDE, RESTORE, READ 2, and several Diabetic Retinopathy Clinical Research Network (DRCR.net) studies have shown that monotherapy with laser has some benefits but with less efficacy than monotherapy with anti-VEGF drugs.7-14

In the DRCR.net Protocol I study, the use of anti-VEGF therapy plus deferred laser resulted in visual acuity similar to that achieved with anti-VEGF therapy plus immediate laser.10-13 As a result, the consensus among retina specialists is that most patients with center-involving macular edema (the typical patients who were included in these trials) do not require laser up front. In patients with more remote macular edema, the use of laser therapy limited to the edematous areas is still common as primary therapy. Steroids are also a potential treatment for patients who do not respond to anti-VEGF therapy after multiple injections or who had a recent severe cardiovascular ischemic event.

Keep in mind that, in patients in whom anti-VEGF therapy did not completely reverse the disease, adding laser may still be beneficial. In fact, results from the recently published Protocol T study support this claim.14 In Protocol T, 660 patients with center-involving DME were randomly assigned to monthly intraocular injections of one of three anti-VEGF drugs: 1.25-mg bevacizumab (Avastin, Genentech), 0.3-mg ranibizumab (Lucentis, Genentech), or 2.0-mg aflibercept (Eylea, Regeneron). After 24 weeks, researchers withheld injections if the edema was not resolved and if visual acuity neither improved nor worsened after two consecutive injections. In such cases, the protocol instructed the treating physician to administer laser treatment and to resume the injections if visual acuity or retinal thickness worsened. 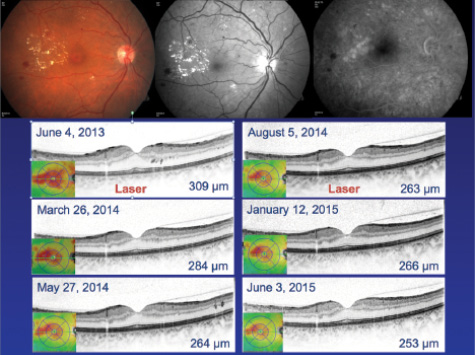 Figure 1. A 44-year-old man with nonproliferative diabetic retinopathy in both eyes. The patient received laser treatments in June 2013 and August 2014. Fundus photograph (A), red-free photograph (B), and fluorescein angiography (C) of the right eye in June 2014. B-scans (D and E) and spectral-domain optical coherence tomography maps (insets) of the right eye at treatment and follow-up visits. 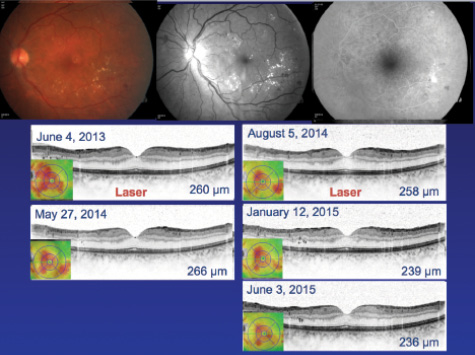 Figure 2. Corresponding images and scans of the left eye of the same patient as in Figure 1.

At the 1-year follow-up visit, data in all three arms indicated visual acuity improvements. There were no differences among treatments in patients starting the trial with visual acuities between 20/32 and 20/40.14 Interestingly, this study found that in all three groups, a substantial number of patients (56% for bevacizumab, 46% for ranibizumab, and 37% for aflibercept) needed laser rescue after 24 weeks.14 In these patients, the beneficial effects of the anti-VEGF drugs reached a plateau, and vision-threatening edema remained, necessitating additional therapy in the form of laser rescue (Figures 1 and 2).

Pharmacologic therapy provides excellent results in the treatment of DME. However, nearly half of patients need supplemental laser after several months of monthly intraocular injections.

In collaboration with my colleagues Michaella Goldstein, MD, and Dafna Goldenberg, MD, I have had an excellent experience using a subthreshold laser prototype to treat patients with extrafoveal DME. Because of the location of the edema, the visual acuity loss that resulted was not significant, so we did not expect significant changes in visual acuity. Surprisingly, these patients showed significant reductions in edema and retinal thickness.6 Regarding safety, this treatment did not leave scars or permanent retinal damage. Taking these findings into consideration along with the clinical trial results discussed above, it seems clear that laser still has a place in the treatment of DME.

Anat Loewenstein, MD, is a professor and the director of the department of ophthalmology at Tel Aviv Sourasky Medical Center and vice dean of the Sackler Faculty of Medicine at the Tel Aviv University. She is a consultant to Lumenis. Dr. Loewenstein may be reached at anatl@tlvmc.gov.il.