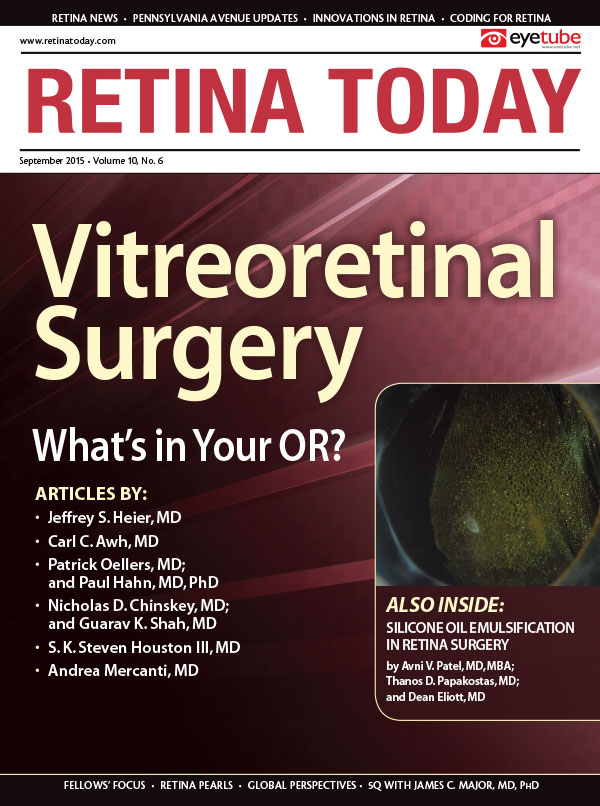 Endoscopy and Its Potential for Visualization

Thanks to recent advances, this technology can be complementary to microscope viewing.

• The endoscope is helpful for examining areas or anatomy of the eye that would otherwise be difficult to view.
• Compared with traditional surgical views, endoscopy allows surgeons to visualize tissues, anatomy, and pathology that might be indiscernible with traditional surgical views.
• Endoscopy-enabled reflected light aids in the visualization of vitreous by causing it to appear more opaque.

Over the past 10 years, advances in endoscopy have increased its potential as an important adjunctive tool in surgical ophthalmology. Many different probes are available today, with varying resolutions and capabilities, and continued work in this arena may further add to this instrument’s value in diagnosing and treating a wide range of pathologies in which visualization is important.

Endo Optiks (now Beaver-Visitec Endo Optiks) introduced a 6000-pixel, 23-gauge probe (available in models OME 230 SMA EA, OME 230 SMA XA, and OME 230 LA), which is simpler to use because the surgeon can insert the probe through a standard 23-gauge cannula, eliminating the need for a separate, larger sclerotomy. This endoscope is useful in less complicated cases. For example, if the surgeon is repairing a detachment using microscopy and visibility is suboptimal due to a compromised anterior segment or becomes suboptimal after air-fluid exchange, a 23-gauge probe can be easily inserted to regain visibility. The limitations of the 23-gauge probe are that the resolution is lower and the light is not quite as bright as on the larger probes. While this instrument provides the surgeon with enough resolution to perform many procedures, it is a step down from the larger, more capable 17 000-pixel endoscopic probes.

I often use the endoscope to examine areas or anatomy of the eye that would be difficult if not impossible to view under normal circumstances. For example, when one is looking for causes of chronic or recurrent inflammation, evidence is often found directly posterior to the iris, where retained lens fragments or occult foci of infection can be hidden.

Although it is possible to view pathology such as this with the current 6000-pixel probe, the lower resolution can make it difficult to differentiate the tissues at times. A new 10 000-pixel, 23-gauge probe will provide significantly better resolution and brightness, increasing the visualization of pathology (Figure). 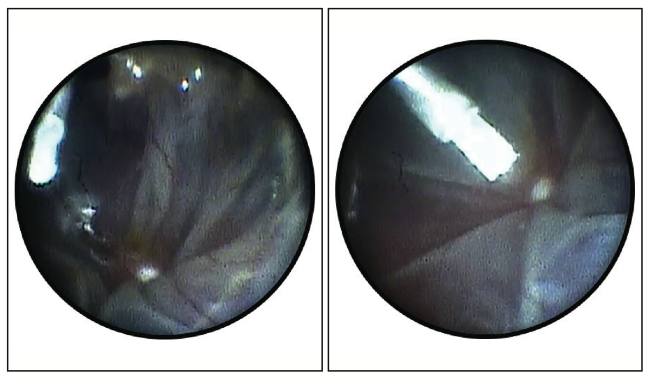 There are many benefits to using endoscopy in surgery. The probe allows the surgeon to visualize tissues, anatomy, and pathology that might be indiscernible with standard viewing methods. Conventional imaging systems, both contact and noncontact, offer excellent visualization of peripheral pathology all the way out to the ora serrata when scleral depression is performed. The problem with scleral depression is that it distorts the normal anatomy of the eye. For example, in cases in which we are attempting to understand tractional forces, the alteration of the anatomy caused by scleral depression may hide or distort the true relationship of the tissue to the pathology.

Another time when an endoscopy perspective can be valuable is in secondary repair of glaucoma surgery. When a drainage tube has been placed in the posterior segment and is malfunctioning, it is important to be able to determine the cause. Whether the malfunction is due to vitreous in the tube or to some other material obstructing it, scleral depression may obscure the cause. In some cases, the use of endoscopy can reveal that the anatomy looks a certain way when the sclera is depressed, but when the tube is in a natural position the anatomy is at a different angle than expected. It may be resting against other tissues, retained lens material, the ciliary body, or an area where there is vitreous. Endoscopy allows us to examine the tube in the position in which it naturally sits in the eye.

Endoscopy is most helpful in cases in which the practitioner has a compromised view of the eye. Compromised visualization can have many causes: anterior segment trauma or abnormalities, congenital corneal disease, previous complicated anterior segment surgery, or multiple previous surgeries, such as multiple glaucoma procedures. Difficulty viewing the eye can also be due to corneal edema or corneal decompensation brought about by a variety of causes, such as corneal degenerations, dystrophies, or surgery. The endoscope allows the surgeon to bypass the compromised view.

Improvements in endoscopy, such as are seen in Beaver-Visitec Endo Optiks’ 10 000-pixel models, provide a wider field of illumination and higher-resolution images than were available with previous models. These probes are trifunctional, meaning they provide light, laser, and visualization through video during the procedure. The illumination is a product of reflected light, not transmitted illumination, and endoscopy-enabled reflected light aids in the visualization of vitreous and membranes by making them appear more opaque.

A young boy came to me with significant trauma in one eye due to a hiking accident. He had a piece of wood in his eye that had penetrated through the lens and exited in the macula, causing a corneal laceration. After several hours of repair of the anterior segment at another center by an anterior segment surgeon, the laceration had been skillfully closed, but this left 20 stitches in the cornea. We could not see through the cornea, and there was significant anterior segment pathology. The patient developed retinal detachment, and the corneal wound was such that it would have been challenging to perform a penetrating keratoplasty. One solution would have been to perform the posterior segment surgery with visualization through a keratoprosthesis, but there was skepticism about whether that approach would work for this particular wound. Instead, we were able to use endoscopic visualization to successfully remove the hemorrhage and repair the tractional retinal detachment.

Endoscopy can be a valuable tool in the retina specialist’s surgical armamentarium, giving practitioners the abilities to view and to treat complicated vitreoretinal surgical disease. Advances in the technology have aided our ability to apply endoscopy to smaller-gauge surgery, and it is our hope and expectation that continued developments will further enhance its use. n