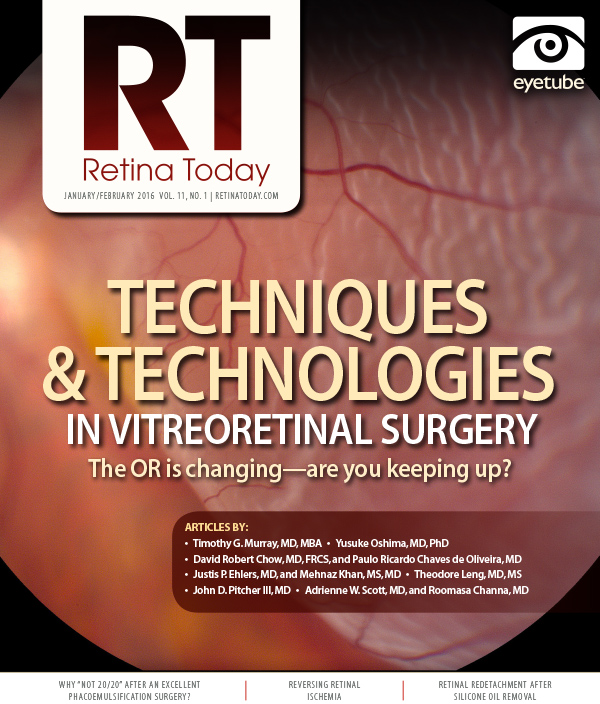 The American Academy of Ophthalmology (AAO) 2015 Annual Meeting was held November 13-17 in Las Vegas, Nev. Retina Subspecialty Day included a number of important presentations featuring data that may shape the future of retina practice. As a service to our readers, we gathered information on a few of those talks. This list is not meant to be exhaustive; rather, it is meant to serve as a quick refresher and a jumping-off point for further reading.

Protocol S: Ranibizumab for PDR Was Noninferior to Laser at 2 Years

Treatment with ranibizumab (Lucentis, Genentech) was noninferior to panretinal photocoagulation (PRP) for the treatment of proliferative diabetic retinopathy (PDR) at 2 years, according to a presentation by Jeffrey Gross, MD.1 The study was published in the Journal of the American Medical Association moments before his presentation.2

Investigators in the Diabetic Retinopathy Clinical Research Network (DRCR.net) Protocol S trial randomly assigned 394 eyes with PDR to treatment with PRP or ranibizumab 0.5 mg. PRP was completed in one to three visits, and ranibizumab injection occurred at baseline and as frequently as every 4 weeks. In the corresponding article in the Journal of the American Medical Association, the study authors wrote that “although longer-term follow-up is needed, ranibizumab may be a reasonable treatment alternative [to PRP], at least through 2 years, for patients with PDR.”

Use of the fluocinolone acetonide intravitreal implant 0.19 mg (Iluvien, Alimera Sciences) resulted in significantly fewer patients with DME advancing to PDR at 36 months compared with sham treatment, according to a presentation by Charles C. Wykoff, MD.1

Patients in the FAME trial, a pair of 3-year phase 3 clinical trials, received continuous low-dose fluocinolone acetonide therapy (0.2 mg) for treatment of DME or sham treatment. At month 36, 17% of patients in the treatment arm progressed to PDR, compared with 31% in the sham arm (P < .001). Researchers determined progression to PDR based on fundus photographs that were graded by a masked, certified reading center and by the incidence of the use of PRP or vitrectomy to treat PDR.

The long-term response of patients receiving anti-VEGF injections for DME can be assessed after three injections, according to an analysis presented by Pravin Dugel, MD.1

Dr. Dugel reviewed data from the DRCR.net Protocol I study, assessing 854 eyes with DME that received anti-VEGF injections. Patients were placed in three cohorts based on the number of letters gained on the ETDRS visual acuity chart at week 12. The cohorts were defined as those who gained less than 5 letters, gained between 5 and 9 letters, and gained at least 10 letters. Researchers compared patients’ 12-week statistics with their statistics at 3 years.

Gene therapy for the treatment of congenital amaurosis, a disease caused by mutation of the RPE65 gene, resulted in improved vision at 1 year, according to a presentation by Albert M. Maguire, MD.1

Patients in a multicenter phase 3 trial were randomly assigned to intervention or control group. Those in the intervention group received gene therapy with SPK-RPE65 (Spark Therapeutics) in both eyes.