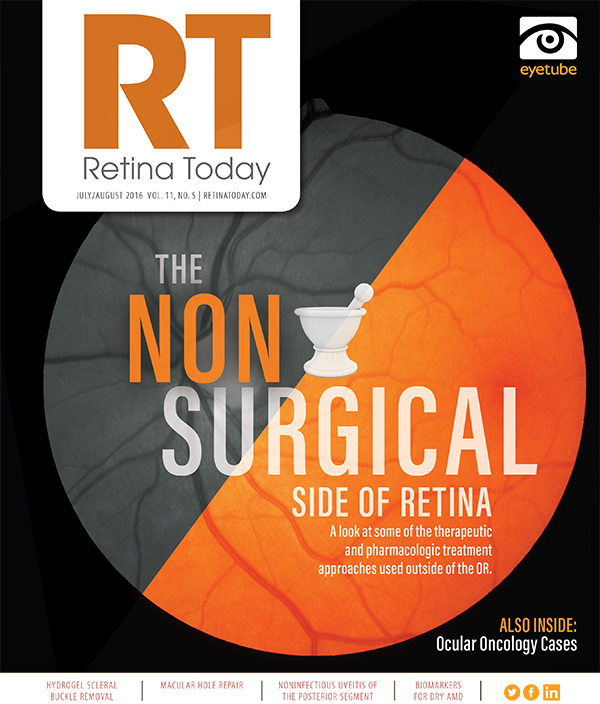 The Promise of Integrin Receptors for Treating Vitreoretinal Disorders

Study results suggest this class of drug has vitreolytic activity and a longer duration of effect than current treatments.

The introduction of anti-VEGF agents has meant a vast improvement in the treatment of retinal disorders compared with previous options. These drugs have allowed retina specialists not only to stop the progression of these diseases, but also to return lost vision to patients.

• Integrin peptide antagonists have been shown to halt leakage when used in the treatment of vitreoretinal diseases.

• Patients treated with three monthly doses of ALG-1001 had a peak reduction in central macular thickness of between 20% and 80%, which lasted 3 months after the last treatment.

We know that VEGF is an important driver in almost all vascular conditions, but when we analyze the data from any of the pivotal trials—either in neovascular age-related macular degeneration (AMD) or in diabetic macular edema (DME)—although the majority of patients do well with anti-VEGF injections, a percentage do not regain as much vision as we might hope. Clearly, a VEGF-mediated pathway is not the only player in the pathophysiology of these conditions.

In the treatment of neovascular AMD, anti-VEGF therapy has hit a ceiling effect. Regardless of which drug is used, we should expect to see 90% to 95% of patients achieve stabilization, but in reality only 35% to 40% of patients gain 3 lines.1-5 We see the same results in the treatment of patients with DME, with about 45% to 50% of enrolled patients achieving clinically significant, clinically meaningful improvements in visual acuity.6,7 That means we might be leaving some potential vision gains on the table. Figure. CMT measurements based on OCT data in all subjects in the phase 1b/2a DEL MAR study. A mean peak reduction of 31% in CMT for all patients was observed.

Integrins are cell adhesion and cell signaling receptors that have been studied for more than 30 years and have been associated with numerous systemic disorders including cancer and autoimmune diseases. Only in the past few years have researchers begun to evaluate anti-integrin therapy in the treatment of vitreoretinal diseases. The integrin α5β3 has been observed in choroidal neovascularization associated with neovascular AMD; another integrin, α5β5, has been associated with proliferative diabetic retinopathy (PDR); and α5β1 is expressed in both neovascular AMD and diabetic retinopathy.8,9 Integrins have also been shown to induce vitreolysis.10 The primary mechanism of action of integrin peptide antagonists is halting leakage.

ALG-1001 (Luminate, Allegro Ophthalmics) is a synthetic arginine-glycine-aspartic acid–class oligopeptide that binds to multiple integrin receptor sites. This first-in-class therapy targets integrin receptors involved in cell signaling, regulation, and construction of new and aberrant blood vessels. It is this dual mode of action that allows anti-integrin therapy to reduce the typical burden of intravitreal injections associated with anti-VEGF therapy, even when used on a treat-and-extend or as-needed regimen.

Integrins may have an impact on disease pathology much earlier by decreasing cell migration, cell invasion, and cell proliferation. In a sense, anti-integrin therapy does not allow vessels to sprout and grow. The ability to curb vessel growth translates to potentially reducing the risk of neovascularization by stabilizing these vessels earlier than we can now and, possibly, by preventing disease occurrence in the first place.

When patients receive anti-VEGF therapy, the vessels regress, but the fibrotic debris remains. This may be an important factor in the vision models we have developed in AMD. Integrins form the scaffolding that those new blood vessels will follow, so, by limiting the production of that scaffolding and part of the material used to build that scaffolding, we have now begun to target and prevent the cause of the disease itself. If we use an analogy of a building, anti-VEGF drugs prevent additional floors from being added (a signaling pathway), but integrin antagonists prevent the infrastructure needed to create the building (the construction pathway) from being built. Integrins target multiple effects that are both upstream and downstream of the VEGF pathway, and, from my experience with some patients in the clinical trials, this therapy has the potential to be useful when added to the current standard of care.

DEL MAR is a double-masked, placebo-controlled, randomized, multicenter, 6-month phase 2b trial designed to evaluate the safety and efficacy of intravitreal injections of ALG-1001 compared with bevacizumab (Avastin, Genentech) and focal laser photocoagulation in the treatment of DME. In an earlier phase 1b/2a DME study (n = 15), patients were dosed monthly with ALG-1001 for 3 months, then observed. The peak reduction in central macular thickness (CMT) as measured on optical coherence tomography ranged from 20% to 80%, with a mean 31% reduction. Additionally, this treatment effect held for an additional 3 months off treatment (Figure). Eight of 15 enrolled subjects showed improvement in BCVA using Snellen charts, with an approximate mean gain of more than 9 letters. The results of the phase 2b DEL MAR study are anticipated during the first quarter of 2017. It is hoped that these results will provide some guidance on the potential treatment durability of ALG-1001.

ALG-1001 has been designed to target specific receptors to prevent cell adhesion altogether. We know the α3β1 integrin sits on the retinal surface close to the vitreous. By inhibiting that receptor, ALG-1001 interferes with its cell-to-cell and cell-to-endothelial-cell-membrane adhesion, which can induce posterior vitreous detachment (PVD). Results from a phase 2 trial of the drug for symptomatic vitreomacular adhesion/vitreomacular traction showed that 50% of patients in the highest dose arm (3.2 mg) had complete resolution of vitreomacular adhesion and vitreomacular traction by day 90, suggesting that ALG-1001 conveys a physiologic approach rather than a pharmacologic course.11

Allegro has begun a phase 2b study evaluating the safety and efficacy of ALG-1001 for inducing PVD in patients with nonproliferative DR. It is hoped that ALG-1001 can induce PVD as a means of preventing the progression to PDR. The PVD study is well on its way to being fully enrolled, and topline data should be available some time in the first quarter of 2017, according to Allegro.

Any time a new treatment strategy is proposed, not only do we need to consider its potential efficacy, but also its potential safety. One of the most notable things about ALG-1001 is that is has been shown to be well tolerated, with a promising safety profile. To date, no drug-related serious adverse events have been reported.

The anti-VEGF treatment effect lasts about 1 month, which is a key reason the treatment burden on patients and clinicians remains so high, especially in a disease such as AMD. But early clinical studies on ALG-1001 seem to suggest a potentially longer treatment effect.

In short, if current studies confirm the earlier findings on ALG-1001’s dual mechanism of action for inhibiting the neovascularization while reducing vascular leakage, as well as its vitreolytic potential, then we may be looking at the next generation of pharmacologic class used to treat vitreoretinal diseases. n