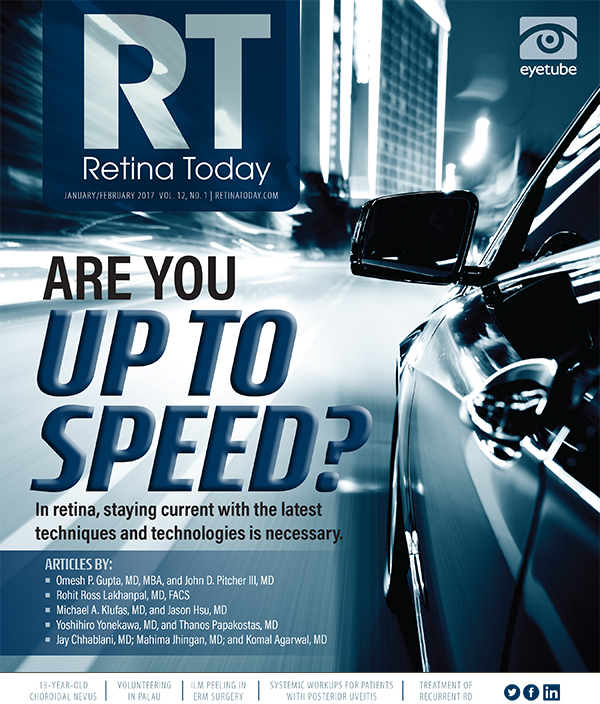 Targeting Tie-2 in patients with wet AMD or diabetic eye disease could allow clinicians to treat patients who have not responded to conventional therapies.

The role that VEGF plays in neovascularization and vascular leakage in patients with age-related macular degeneration (AMD) and diabetic retinopathy (DR) has been carefully delineated. VEGF antagonists have become the most effective form of therapeutic intervention for patients with these diseases. However, VEGF is not the whole story, and anti-VEGF therapy may need to be supplemented with additional therapy. Researchers are beginning to understand the role that the angiopoietin–Tie-2 axis plays in the process of AMD and DR disease pathogenesis and progression. In this issue’s Innovations in Retina column, we review the mechanisms of action of angiopoietin-2 (Ang-2) and the cell surface receptor known as tyrosine kinase immunoglobulin and epidermal growth factor 2, or Tie-2, and their role as therapeutic targets in DR and AMD. Our discussion will review how these targets differ and the implications of their use for treatment of these disease groups.

• Ang-2 and Tie-2 play roles in vascular proliferation in DME and wet AMD.

• Upregulation of Ang-2 may lead to vascular inflammation and destabilization that could initiate or exacerbate existing ocular disease.

• Combination therapies that simultaneously target VEGF and Ang-2 are being evaluated in clinical trials.

Ang-1 and Ang-2 are critical components of a signaling system in developmental and pathologic angiogenesis. This signaling system has many important parallels to the VEGF system. Both Ang-1 and Ang-2 are expressed selectively by endothelial cells. Signaling of Tie receptors appears to complement VEGF’s activity by targeting later stages in vessel development; while VEGF signals promote the initiation of events such as endothelial cell sprouting, Ang-Tie signals promote endothelial cell survival, vascular assembly, stability, and maturation. Both Ang-1 and Ang-2 are ligands of similar affinity for the Tie-2 receptor, with Ang-1 being agonistic and Ang-2 being a mix of agonistic and antagonistic. Thus, competitive binding depends on the cytokine and metabolic forces within the endothelial cell that shift the predominance of Ang-1 versus Ang-2. The function of the Ang-1–Tie-2 axis has been solidly established in animal models: It involves maintenance of a healthy quiescent vasculature; tightening cell-to-cell junctions; reducing vessel leakage; controlling vascular activation and dysfunction; and inhibiting leukocyte infiltration.1-3 Following binding of Ang-1, Tie-2 becomes phosphorylated on several cytoplasmic tyrosine residues, resulting in activation of downstream signaling, including critical protein kinase B (AKT) and extracellular signal-regulated kinase (ERK) pathways that ultimately inhibit calcium flux. Activation of these pathways is known to decrease expression of adhesion proteins and to inhibit endothelial permeability through effects on the actin cytoskeleton.3

Although researchers do not understand the Ang-2 signaling system as well as they understand the Ang-1 signaling system, it is known that Ang-2 expression is increased in several disease settings, including metastasis, sepsis, inflammation, wet AMD, and DR. Ang-2 appears to be critical to mounting leukocyte recruitment at sites of inflammation.4-5 Because the activity of Ang-1 and activation of Tie-2 lead to stabilized vessels and reduced inflammation, it is presumed that Ang-2 acts via inhibition of Tie-2 signaling, thus promoting vessel destabilization and inflammation.

Ang-2 is normally produced in settings of low Ang-1 and high levels of activating factors for endothelial cells; thus, the context of Tie-2 signaling during times of Ang-2 expression is probably very different from that of quiescent endothelial cells. The confusion comes from evidence of Tie-2 activation via Ang-2. Vascular endothelial-protein tyrosine phosphatase (VE-PTP) is a receptor tyrosine Tie-2 phosphatase crucial to the ocular vasculature. Tumors that lack VE-PTP have high levels of phosphorylated Tie-2 and larger vessels than tumors with VE-PTP, consistent with Tie activation instead of inhibition. Treatment of these tumors with Ang-2 antibody decreases vessel size and phosphorylated Tie levels, indicating that in this system, Ang-2 acts as a Tie-2 activator and not as an antagonist.4-5

A different mechanism of Ang-2 pathology involves the initial stages of vasoregression, which not only is the primary pathogenic response of the retina to chronic hyperglycemia, but also is a common phenomenon underlying all pathologic microvascular disease leading to neuropathy, nephropathy, and ocular vascular diseases such as DR and wet AMD.6 Presence of Ang-2 is at least partly responsible for the hyperglycemia-induced loss of migrating pericytes in the retina of a diabetic patient; this loss results in vasoregression, capillary dropout, and hypoxia. Expression of both VEGF and Ang-2 is induced by hypoxia and promotes angiogenesis in an attempt to restore oxygen delivery. Therefore, not only is Ang-2 responsible for vessel proliferation in later stages, it also plays a major role in initial pericyte loss, endothelial cell degeneration, capillary occlusion, glial cell activation, and breakdown of the blood-retina barrier that defines diabetic vasoregression.7 Similar signaling leading to Ang-2 upregulation and progression of vasoregression is thought to occur in wet AMD as a result of retinal hypoxia and VEGF formation and release.6

A further complication of Ang-2 activity is its direct proangiogenic effects through binding to integrins in a Tie-2–independent pathway. In a healthy quiescent endothelial cell, Tie-2 is expressed and integrins are in a resting conformation. Hypoxia or other factors lead to secretion of stored Ang-2 and upregulation of Ang-2 synthesis. This interferes with Ang-1–mediated Tie-2 activation, destabilizing the resting endothelial cell monolayer and priming it to respond to exogenous cytokines. Ang-2 then also binds directly to integrins, now primed into their active conformation with this inflammatory-hypoxic signaling milieu, leading to downregulation of Tie-2 expression and ensuing endothelial cell migration and sprouting. In turn, the Ang-1–Tie-2 signaling is antagonized by Ang-2 in a destabilizing manner. As such, Ang-2 can be considered a multitasker, controlling angiogenesis in a dual manner depending on the absence or presence of Tie-2.8

TARGETING TIE-2 IN TREATMENT OF NEOVASCULARIZATION

Pharmacologic targets of Tie-2 activity do not have to depend strictly on Ang substrates. Aerpio Therapeutics has developed a small molecule inhibitor of VE-PTP, or HPTP, called AKB-9778. Evidence suggests that the primary action of VE-PTP is as a key negative regulator of Tie-2 activation (phosphorylation). When VE-PTP is inhibited, Tie-2 activation and signaling are enhanced, and vascular stability is promoted despite high concomitant expression of Ang-2. AKB-9778 shows beneficial effects in multiple diverse preclinical models of systemic and retinal vascular leakage and pathologic neovascularization, suggesting potential efficacy in a broad range of conditions, including retinopathies.9,10

One novelty of AKB-9778 is that it is delivered subcutaneously. This route is well suited for diabetic patients with DME, and it was shown in a phase 1b/2a clinical trial to cause definitive reductions in retinal thickness and associated improvements in visual acuity. Because of the subcutaneous delivery route and systemic VE-PTP inhibition, AKB-9778 may have beneficial effects on other diabetic vascular comorbidities and complications such as hypertension, nephropathy, neuropathy, and diabetic ulcer healing, possibly linked to the molecule’s secondary effects on endothelial nitric oxide synthase (eNOS).9,10

INHIBITION OF ANG-2 AND VEGF

Targeting both VEGF and Ang-2 inhibits the initial and later stages of pathologic angiogenesis. Roche has developed a bispecific antibody called RG7716. This antibody has two arms: one that binds to VEGF as bevacizumab would, and one that binds to Ang-2. This synchrony also should counteract the undesirable Ang-2 overexpression that can occur in certain contexts of VEGF-A inhibition. The double monoclonal antibody has demonstrated strong inhibition of angiogenesis with an enhanced vessel maturation phenotype.11,12 This therapy is administered intravitreally. We look forward to seeing the results of the ongoing first clinical trials of RG7716 in patients with center-involving DME (called the BOULEVARD study, due to be completed in October 2017) and wet AMD (called AVENUE, due to be completed in July 2017).13,14

The complexities of the signaling pathways for angiogenesis provide clinicians with multiple targets for intervention, and technology allows the targeting of dual targets with a single drug or formulation. The Ang–Tie-2 axis is a critical tyrosine kinase cascade with multiple upstream and downstream ligands that can be manipulated.

Directly knocking out Ang-2 frees up Tie-2 for Ang-1 binding, resulting in stabilization of vessels, tightening of junctions, and decreased endothelial permeability. Blocking Ang-2 would have the added benefit of inhibiting its Tie-2-independent direct angiogenic effects on integrins.

Even in the presence of high levels of Ang-2, Tie-2 activation, by blocking the negative regulator VE-PTP as AKB-9778 does, activates downstream inflammatory and angiogenic signaling such as AKT, eNOS, and ERK, resulting in significant inhibition and regression of neovascularization.

The next 2 years should prove pivotal in developing better means of treating ocular diseases of angiogenesis. The possibility of promoting vascular stability on a systemic level is particularly exciting in diabetic eye disease, which has far-reaching and devastating effects.

4. Fiedler U, Reiss Y, Scharpfenecker M, et al. Angiopoietin-2 sensitizes endothelial cells to TNF-a and has a crucial role in the induction of inflammation. Nat Med. 2006;12:235-239.