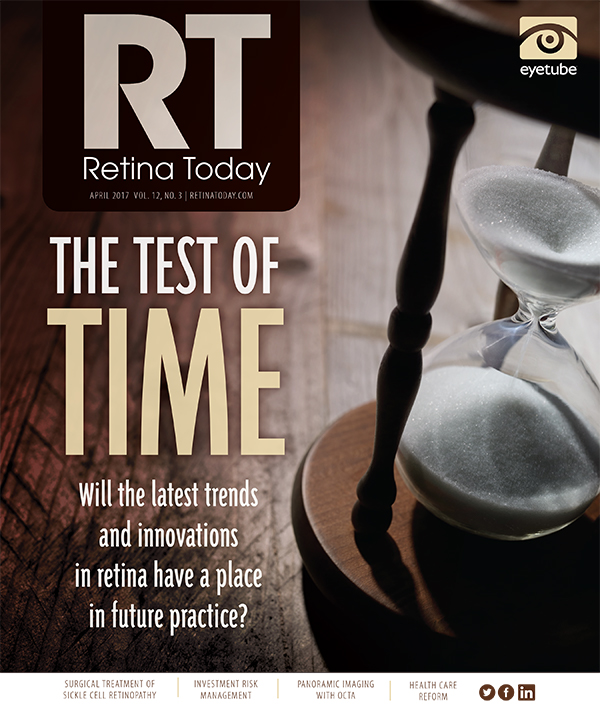 In November, I was invited to participate in a new retina podcast series, Straight From the Cutter’s Mouth, launched by Jayanth Sridhar, MD, an assistant professor of clinical ophthalmology and vitreoretinal surgery at the University of Miami’s Bascom Palmer Eye Institute. Dr. Sridhar developed the podcast with the goal of providing an informative venue for ophthalmologists to listen to informal yet insightful thoughts from leaders in the field and from up-and-coming retina specialists. A few months after my podcast debut, I taught a retina surgical coding course onsite at Bascom Palmer. This column is a compilation of some of the most common questions that came up that day and my answers to them.

Medical necessity is the foundation of the Medicare program. Coverage of a Medicare service depends on that service being medically necessary and medically reasonable. Sweet and simple. This applies to all services: office visits, diagnostic tests, and surgery.

Section B3 2320 of the Medicare Carriers Manual states, “The coverage of services rendered by an ophthalmologist is dependent on the purpose of the examination rather than the ultimate diagnosis of the patient’s condition.” Thus, the principal coding of a surgical case should be guided by the purpose of the surgery, not by other procedures that may also be performed.

Selecting the Order of CPT Codes

Normally, one lists the order of multiple Current Procedural Terminology (CPT) codes with the highest paying code first. However, sometimes bundling under the National Correct Coding Initiative (NCCI) kicks in, and then all of the codes cannot be used. Again, the codes selected should be chosen by the purpose of the procedure, as in the example below.

In CPT code definitions, note that, when a code is indented, the description up to the semicolon on the line above is included as a prefatory phrase to the indented material, as in the following example:

Q: What codes would you use for silicone oil removal? Please compare 67121 vs 67036 vs 67039. Do you have to use a modifier if the procedure is performed outside of the global period?

A: Various issues must be addressed in order to answer this question, beginning with the previously discussed premise of medical necessity. If the eye has already been vitrectomized, CPT code 67121 may be a better choice than 67036. Focal endolaser is a higher paying code; however, prophylactic laser was not the purpose of the surgery and thus is not the reason the surgery was undertaken. Focal endolaser photocoagulation is bundled with 67121 and 67036.

Whenever silicone oil has migrated to the anterior chamber and is removed via that route, an anterior segment code for removal of implanted material (65920) is used rather than code 67121.

History: A rhegmatogenous retinal detachment in a patient’s left eye had previously been repaired using silicone oil, and the oil must be removed. This occurs outside the global period.

From the Operative Notes*: “25-gauge vitrectomy ports were placed 4mm posterior to the limbus; inferotemporal, superotemporal, and superonasal. The silicone oil was passively and then actively aspirated from the left eye. Air-fluid exchange was performed multiple times to remove any remaining bubbles…”

*HIPAA regulations mandate that the identity of the surgeon not be revealed in this and the following examples. The quotes are reproduced verbatim without editing.

1. T85.698A Other mechanical complication of other specified internal prosthetic devices, implants and grafts

History: The patient previously had a repair of a retinal detachment in the right eye using silicone oil and presents with an epiretinal membrane (ERM) and multiple inclusion cysts that are filled with the oil.

From the Operative Notes: “The prominent conjunctival inclusion cysts nasal and infranasal were dissected. They were filled with silicone oil, which was removed and the wall of the cyst was excised. Smaller cysts inferiorly were also excised. They also contained silicone oil. The conjunctiva was opened in small limbal peritomies inferotemporally, supratemporally and supranasally. Sclerotomy sites were fashioned 3 mm posterior to the limbus at the 8:00, 10:00 and 2:00 positions. Infusion port was secured inferotemporally with 5-0 Mersilene. Direct inspection through the pupil showed the tip to be unobstructed. Silicone oil was removed. It appeared to be 5000 centistoke oil. Several air-fluid exchanges were performed to facilitate further removal of the oil, although the crystal lens which is made of silicone did bind to some of the silicone oil. Triescence was placed over the macula and pick and forceps was used to elevate a sheet of epiretinal membrane off the macula.”

1. T85.698A Other mechanical complication of other specified internal prosthetic devices, implants and grafts 66852 pars plana approach, with or without vitrectomy

Q: Is 66850 or 66852 used when performing lensectomy surgery associated with a vitrectomy and ERM peel or macular hole repair?

A: There is a parenthetical comment in CPT following the listing of the vitrectomy codes that mandates “(For associated lensectomy, use 66850).” This is confusing because 66850 is an anterior approach code. It seems more logical to choose 66852 due to the words “pars plana” in the description. However, for Medicare, the claim will not be paid because, under the NCCI, 66852 is bundled with all vitrectomy and retinal detachment repair codes.

CODING FOR ERM PEELING AND REPAIR OF MACULAR HOLE

Q: Does the peeling of the internal limiting membrane (ILM) matter? What diagnoses can you use with each code (eg, macular pucker vs macular cyst vs macular hole?

A: When an ERM peel is performed to correct macular pucker, the proper coding is 67041; if the ILM is also peeled, 67042 is not additive to the procedure—in fact, the two codes are bundled. Thus, it is the purpose of the surgery, combined with which procedure was medically necessary in fulfilling that purpose, that determines the code selection. When coding more complicated cases in which both procedures were performed, it is important to check the Medicare payments each year and choose the higher paying one.

The basic ICD-10-CM diagnosis for each code is as follows:

The last digit (signified by -) is to be added to indicate right, left, bilateral, or unspecified eye—1, 2, 3, or 9, respectively.

67108 Repair of retinal detachment; with vitrectomy, any method including, when performed, air or gas tamponade, focal endolaser photocoagulation, cryotherapy, drainage of subretinal fluid, scleral buckling, and/or removal of lens by same technique

Q: What is the proper coding for vitrectomy, IOL removal, and suturing of a new IOL? Should it be 67036 and then IOL exchange, or 67036 with IOL removal (posterior segment) and then suturing?

A: This is a complicated question, and the answer depends on the specific clinical situation. The coding involves the use of different CPT codes and selection of the proper codes depending on the maneuvers performed. It frequently involves application of modifier 59 for unbundling code pair edits that appear in the NCCI. Riva Lee Asbell shares insights into common retina surgical coding issues and areas of confusion with the host of Straight From the Cutter’s Mouth. Click the microphone to listen now.

A perusal of the applicable codes for this section reveals a mixture of anterior and posterior segment codes that are often utilized in combination with each other. Code 67121 was first issued for coding retrieval of an IOL that had fallen into the posterior segment. Different coding sequences may often be used for the same case, which further complicates the issue when both ways are correct (see Case No. 4 in my November/December 2016 column in Retina Today).2

Another conundrum is whether use of 67036 is legitimate when a previous pars plana posterior vitrectomy has been performed.

Below are several examples to address these queries.

From the Operative Notes: “The conjunctiva was opened from infero-nasally to infero-temporally along the superior 180 degrees. A corneal marker was used to mark two points 180 degrees apart.

Four sclerotomies were made 2mm to each side of, and three mm posterior to these marks. The infusion was placed outside of these sclerotomies infero-nasally. A lamellar wound was created superiorly and bought forward to the clear cornea without entering the anterior chamber. A 25 paracentesis was performed temporally and the anterior chamber filled with Healon. The lens was pushed into the posterior chamber. Vitrectomy was performed to release the lens and allow it to fall back. Closed vitrectomy was carried out under wide field visualization. Endolaser was applied between the equator and the ora 360 degrees. A fragmatome was introduced and used to remove the retained lens fragments… An Akreos lens was threaded with Goretex sutures and the sutures entered into the posterior chamber from the limbal wound and exited with forceps through each sclerotomy. The lens was folded and inserted into the posterior chamber. The sutures were tightened. The lens centration was less than satisfactory. A new sclerotomy was created further superiorly 3 mm posterior to the limbus and the Goretex suture moved to the new sclerotomy. Lens centration was excellent. The Goretex sutures were tied…” History: A displaced IOL was present in the posterior segment along with capsule and crystalline lens remnants on the macula in the right eye.

From the Operative Notes: “The conjunctiva was opened 360 degrees. Partial thickness, limbus based, 4 mm wide, sclera flaps were created 3mm posteriorly, 180 degrees apart, as marked by an astigmatic marker… A lamellar scleral tunnel was made up into clear cornea superiorly and the AC entered with a keratome. The AC was filled with Healon. Closed vitrectomy was carried out under wide field visualization. Endolaser was applied between the equator and orra 360 degrees. No retinal breaks were noted. The intraocular lens, capsule and lens remnants were on the macula. The lens was grasped and bought into the anterior chamber and placed on the iris. Further viscoelastic was injected into the AC and the superior wound enlarged with the keratome. The IOL was grasped with the Kelman forceps and removed from the eye. The retained lens fragments and capsular remnants were brought to the wound using viscoelastic and removed using the superior wound. An Akreos lens was brought into the field and prepared by placement of Goretex sutures. The Goretex sutures were passed through the AC and out through each sclerotomy in the scleral beds. The IOL was folded and inserted into the posterior chamber…” History: The patient presented with a retinal detachment, retained lens fragments, and a malpositioned IOL in the right eye.

From the Operative Notes: “Closed vitrectomy was carried out under wide field visualization. Vitreous traction was relieved from the lens fragments suspended in the vitreous… The fragmatome was placed in the eye and used to remove the lens fragments. Examination of the retina revealed two horseshoe style breaks superotemporally. An air-fluid exchange was performed. Endolaser was applied 360 degrees with care taken to surround the retinal breaks.

An iris hook was placed temporally. Viscoelastic was placed in the anterior chamber. The intraocular lens was dialed so as to free the haptic from the iris, and a Sinskey hook was used to elevate the haptic from the iris and place it above the remaining lens capsule. The lens showed good centration and stability. The iris hook was removed… Further air-fluid exchange was performed. The vitreous cavity was washed with 20% SF6 gas…”