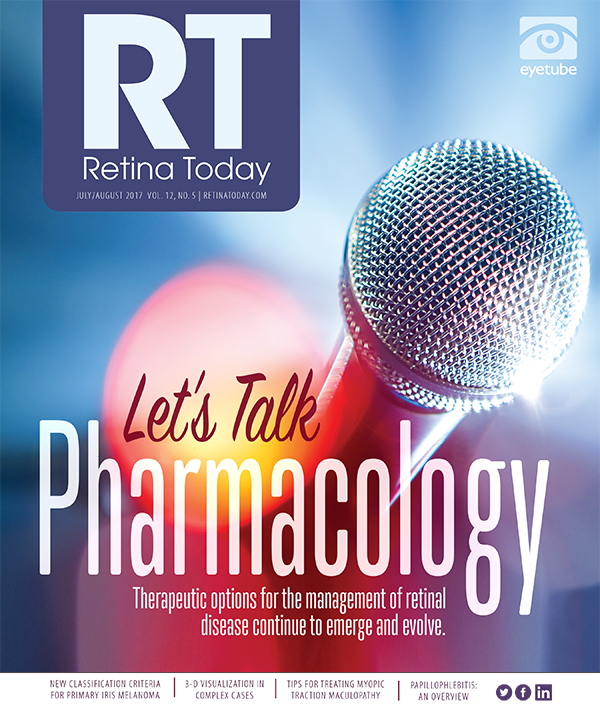 in AMD, Brolucizumab was Effective With 3-month Dosing Interval

Brolucizumab (RTH258, formerly ESBA1008, Novartis) met its primary efficacy endpoint in two phase 3 clinical trials, demonstrating noninferiority to aflibercept (Eylea, Regeneron) in patients with neovascular age-related macular degeneration (AMD). Of note, the investigational drug was given on a 3-month dosing interval, while aflibercept was given on a bimonthly regimen as per its labeling. Novartis announced the results in a press release.1

Brolucizumab “has the potential to address the needs of patients with neovascular AMD who would benefit from a long-lasting, efficacious treatment with a less frequent dosing regimen,” Novartis said in the press release.

More than 1,800 patients were included in the two 96-week prospective, randomized, double-masked, multicenter studies. The primary efficacy endpoint in both trials was noninferiority to aflibercept in mean change in best corrected visual acuity from baseline to week 48.

Citing data on file, the company said that 57% and 52% of patients receiving brolucizumab 6 mg in the two trials were maintained exclusively on the every-3-month interval, begun after the loading phase and continued through week 48. The press release did not define “maintained.” In both studies, ocular and nonocular adverse event rates for brolucizumab were comparable to those for aflibercept, the press release said. According to the company, further results of the studies will be presented at an upcoming medical meeting.

The US Food and Drug Administration (FDA) has announced plans to make its review of orphan drugs more efficient. In June, the FDA listed a number of steps it will take toward this goal, including the creation of a SWAT team of senior reviewers to focus on requests for orphan drug designation.

Orphan drugs are those meant to treat diseases that affect fewer than 200,000 people in the United States, according to the FDA’s definition. The number of orphan drug requests received by the FDA more than doubled from 2012 to 2016, according to a document from the FDA describing the planned changes.1

As part of the modernization effort, the FDA is pledging to complete review of all orphan drug designation requests that are older than 120 days by September 21, and after that to respond to all new requests within 90 days of receipt. The FDA plans to create a streamlined designation review template to reduce the administrative burden on its reviewers. The agency will keep track of its progress in this effort weekly, adjust as necessary, and report on progress to the public, according to the document.

An encapsulated cell therapy slowed the progression of photoreceptor loss in patients with idiopathic juxtafoveal macular telangiectasia (MacTel) in a phase 2 clinical trial, according to the company developing the treatment. In the study, which included 99 eyes of 67 patients with MacTel, at 2-year follow-up there was significantly less photoreceptor loss in eyes receiving a cell therapy implant compared with those that underwent a sham procedure, according to a company press release.1

The therapeutic implant, NT-501 (Neurotech), delivers ciliary neurotrophic factor (CNTF) to the back of the eye. The encapsulated cell therapy platform that supports NT-501 can be customized to deliver specific molecules to treat different diseases, the company said.

The primary endpoint of the multicenter randomized phase 2 trial was change in the ellipsoid zone from baseline to month 24, as measured by spectral-domain optical coherence tomography. An increase in area of the ellipsoid zone is a measure of disease progression in MacTel, correlated with loss of photoreceptors and thus vision loss.

In a secondary clinical endpoint, reading speed was maintained in the treated eyes but deteriorated in sham-treated eyes (P = .016). NT-501 was well-tolerated, and no patients required removal of the implant during the study.

According to the company, NT-501 has received orphan drug designation from the FDA for MacTel, a rare neurodegenerative disease with no effective treatment. The company plans to move forward to phase 3 clinical evaluation.

Stay in the Know

Top stories from other areas of the eye care industry.

Topcon Medical Systems established the Topcon Research Foundation, which will support studies sponsored by independent investigators and institutions that use Topcon products to advance medical and scientific knowledge in the field of ophthalmology. Researchers and institutions are invited to apply for grants by visiting www.topconresearchfoundation.com.

At this year’s World Glaucoma Congress, held June 28 through July 1, Quantel Medical launched the SubCyclo laser procedure for the treatment of primary open angle glaucoma and angle-closure glaucoma, according to a company news release. SubCyclo is a novel nonthermal glaucoma treatment based on the principles of transscleral cyclophotocoagulation. The procedure lowers IOP by stimulating the ciliary body and the uveoscleral pathway, a route of aqueous outflow, without destructive effects. Because it is nondestructive, the procedure can be used earlier in the disease process, the company noted in the press release. The SubCyclo probe is available on Quantel’s Supra 810 laser.

The Durasert (pSivida) implant for treatment of posterior segment uveitis met its primary endpoint in a phase 3 clinical trial, preventing the recurrence of uveitis at 6 months, according to a company press release.1

The study, which will continue to follow patients for 3 years, included 153 patients with posterior segment uveitis. At the 6-month primary endpoint, the implant demonstrated a significant reduction in the recurrence of posterior segment uveitis in treated patients: 21.8% of patients receiving the implant had a recurrence of uveitis, compared with 53.8% of patients receiving sham treatment (P < .001).

Genentech Will Use Home Vision Test App in Clinical Trials

Genentech has signed a licensing agreement to use the mVT vision testing application service (formerly called myVisionTrack; Vital Art and Science) in its clinical trials investigating ophthalmic drugs and devices. Under the agreement, Genentech intends to use the app service “to enhance patient experience, improve the effectiveness of patient‘s interactions with health care providers, and apply the data collected through the app service to improve patient care and clinical trial design,” according to a press release from Vital Art and Science announcing the agreement.1

In fact, Genentech is already using the mVT app. It is being used in the phase 2 LADDER study (NCT02510794) investigating sustained delivery of ranibizumab (Lucentis, Genentech) through the Port Delivery System (Genentech) in patients with wet AMD. In that trial, patients test their vision using the app during in-clinic appointments and at home, according to the press release.

The mVT app received 510(k) clearance from the FDA in 2015 for use in home vision monitoring in patients with maculopathy.

A photochromic ligand (PCL), injected intravitreally in blind mice, restored retinal light responses and light-driven behavior in blind mice, according to a recently published study.1 Unlike other photopharmacologic approaches that have been investigated in the past, this third-generation photoswitch, diethylamino-azo-diethylamino (DAD), has characteristics that may be advantageous for restoring visual function, according to the study authors.

PCLs are light-sensitive small molecules that can reversibly switch between two configurations upon stimulation by light, altering their binding affinity and enabling light-dependent control of neuronal function. Due to the simplicity of this on-off mechanism, and the fact that the PCLs can be added, removed, or improved as needed, this photopharmacologic approach may be more flexible than other approaches to restoring visual function such as retinal implants or stem-cell therapies, the authors suggested.

In addition, unlike previous PCLs that have been investigated, DAD acts upstream of retinal ganglion cells, conferring light sensitivity to bipolar cells, the cells in the retina that receive input from the photoreceptors. Also, DAD was able to generate on and off visual responses in the retinas of blind mice using intrinsic retinal circuitry, reacting when exposed to light and then relaxing to the inactive state when the stimulus was removed.