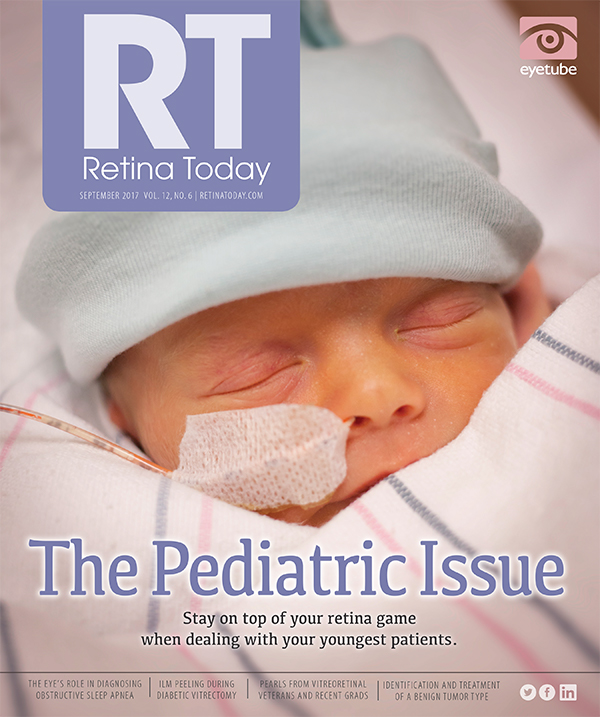 Pearls for Bimanual Maneuvers in TRD or RRD

Two-handed techniques are facilitated by the use of small-gauge instrumentation.

• TRD and combined TRD/RRD are serious complications of severe PDR.

• Recent advances in surgical technologies and techniques in small-gauge vitrectomy have improved the safety and efficiency of surgery for diabetic TRD/RRD.

• Bimanual maneuvers can help to reduce operating times and decrease the chances of complications in these challenging eyes.

Since Robert Machemer, MD, pioneered closed-eye pars plana vitrectomy in 1968, followed by the introduction of the three-port intravitreal approach in 1972, conventional 20-gauge pars plana vitrectomy (PPV) has been the standard treatment for diabetic TRD/RRD, achieving good anatomic success.1-3 Recent advances in less-invasive surgical techniques and technologies have allowed surgeons to use smaller-gauge instrumentation for this surgery with equal or better results.

The conjunctiva-sparing nature of microincision vitrectomy surgery (MIVS) using 23-gauge, 25-gauge, or 27-gauge instrumentation allows repeated vitrectomy or filtering surgery, which may be needed in patients with diabetes complicated by neovascular glaucoma even after vitrectomy. The reduced postoperative inflammation associated with MIVS may contribute to early visual rehabilitation and reduce the chance of reproliferation after surgery. In addition, because the ports of 25- and 27-gauge vitreous cutters are small and the distances from the ports to the tips are shorter than those of conventional 20-gauge vitreous cutters, the cutters can serve as multifunctional tools to perform delicate membrane dissections in diabetic vitrectomy.4-6

In this article, surgical techniques and tools for performing bimanual maneuvers with MIVS in eyes with diabetic TRD/RRD are described.

The use of wide-angle viewing systems in conjunction with chandelier endoillumination has improved surgeons’ ability to perform bimanual intraocular manipulations with small-gauge instruments in challenging cases. With the benefit of panoramic viewing, we no longer need to move the globe with surgical instruments to visualize the periphery. Thus, we have less frustration with the feeling of fragility of small-gauge instruments during vitrectomy. In addition, chandelier endoillumination allows the surgeon to have one hand free to manipulate.7

These two advances have facilitated faster, safer, more delicate, and more thorough removal of membranes from detached or mobile retina with the use of small-gauge instruments and a bimanual technique approach. In some easy cases, membranes can be peeled, dissected, and removed with one hand because of the multifunctionality of the cutter. However, bimanual membrane dissection or peeling is strongly indicated for use in patients with TRD/RRD due to diabetic fibrovascular membranes or when TRD/RRD is combined with PVR along with adhesive preretinal or subretinal membranes.4,6 Figure 1. Bimanual technique using forceps to grasp the membrane edge to insert the port of a small gauge cutter between the proliferative membrane and the retina.

TECHNOLOGIES AND TECHNIQUES FOR MEMBRANE CUTTING

In diabetic TRD/RRD cases, I usually use membrane forceps with a vitreous cutter to grasp and dissect broad membranes. With a wide-angle view, the forceps can engage the edge of the membrane easily to introduce the blunt tip of a small-gauge cutter into the tight space between the detached retina and adherent membranes (Figure 1).

Most recently developed vitrectomy machines feature high-speed cutters with cutting rates greater than 7,500 cpm. These high cutting speeds allow the duty cycle to be maintained at more than 50%, dramatically improving the vitreous cutting efficiency of the small-gauge cutters—even 25-gauge and the much smaller 27-gauge—for membrane cutting and removal. The recently introduced double-port cutter, which features a second, internal port in the guillotine blade incorporated into the spring-pneumatic driven cutter, improves flow efficiency by maintaining the duty cycle without attenuation while increasing the cutting rate.8 This refinement dramatically increases flow efficiency during 27-gauge vitrectomy.9 The port of the 25- or 27-gauge cutter can be inserted readily between the fibrovascular membrane and retina, allowing successful membrane segmentation, dissection, and removal using the vitreous cutter alone instead of vitreoretinal scissors in most cases (Figure 2).

In the most challenging cases, with thickened membranes strongly adherent to the retina, the combination of forceps with curved scissors is another option (Figure 3). In these cases, the edge of thickened fibrovascular membranes or large blood clots can be engaged by the forceps and then separated from the retina with scissors. After the separation, the membrane or clot can then be cut off with the small-gauge cutter using reduced cut rates. Figure 3. Bimanual technique for membrane dissection using forceps to lift up the membrane edge to insert small-gauge scissors to cut off the anchor between the membrane and retinal vessels.

Bimanual Technique in a Case of TRD Bimanual membrane manipulation viewed through a wide-angle viewing system with chandelier endoillumination. Grasping the membrane edge with forceps, the membranes are separated from the retina, segmented, then dissected using only the multifunctional vitrectomy cutter.

Thanks to the adjunctive use of VEGF inhibitors, uncontrolled intraoperative bleeding has become much less of an issue. Even if bleeding occurs during membrane removal, it can be stopped in most cases with direct compression of the bleeding point with the blunt tip of the cutter.5 Reducing the use of cautery to achieve hemostasis may eliminate coagulative damage to the normal retinal vessels and the time wasted in instrument exchanges. This technique is facilitated using small-gauge instruments, but it may not be so easy with the less delicate 20-gauge vitreous cutters.

If bleeding cannot be controlled with this technique, a bimanual technique can be used. In this approach, a back-flush needle is used to perform active aspiration to pinpoint the source of bleeding, and a diathermy probe is used to perform immediate pinpoint hemostasis. Another option is to use the proportional reflux function on the vitrector to draw out the blood and allow immediate pinpoint cauterization. Both of these techniques are helpful to keep the blood from reobscuring the bleeding point, which often occurs during instrument exchange with one-handed manipulation. The reduced need for instrument exchange with small-gauge instrumentation contributes to the efficient use of operating time, even in challenging diabetic cases. Figure 4. In a challenging case of TRD complicated with proliferative vitreoretinopathy, a double forceps technique is used to separate a strongly adherent membrane from the detached retina.

In some cases of long-standing retinal detachment complicated by subretinal proliferation, a two-forceps technique can be used to peel strongly adherent membranes and avoid creating iatrogenic breaks (Figure 4). It is useful to peel the subretinal stands or membranes from small retinal holes using small-gauge instruments in a hand-to-hand manner to avoid enlarging the retinal holes. To visualize transparent membranes, it is helpful to stain them with a mixed solution of trypan blue and brilliant blue G dyes. With this combination, preretinal membranes are stained by the trypan blue and the internal limiting membrane by the brilliant blue G. Another tip is to peel the membranes under perfluorocarbon liquid, which helps to flatten and stabilize the detached retina so that membrane peeling can be accomplished with small-gauge forceps.

Recent advances in surgical technologies and techniques in small-gauge vitrectomy have improved the safety and efficiency of surgery for diabetic TRD/RRD. Bimanual maneuvers, used in small-gauge vitrectomy with recently developed vitrectomy machines and wide-angle visualization systems, offer the best surgical options to reduce operating times and decrease the chances of complications in these challenging diabetic eyes.

Yusuke Oshima, MD, PhD
• founder and director of the Oshima Eye Clinic in Takatsuki, Japan; a consultant and visiting surgeon at the Nishikasai Inoue Eye Hospital; a visiting lecturer of ophthalmology at Kyoto Prefectural University of Medicine, Kyoto, Japan; an honorary director of the vitreoretinal division at the Tianjin Eye Hospital and a visiting professor of ophthalmology at the Nankai University, both in Tianjin, China
• member of the Retina Today editorial advisory board
• financial disclosure: none acknowledged
• yusukeoshima@gmail.com