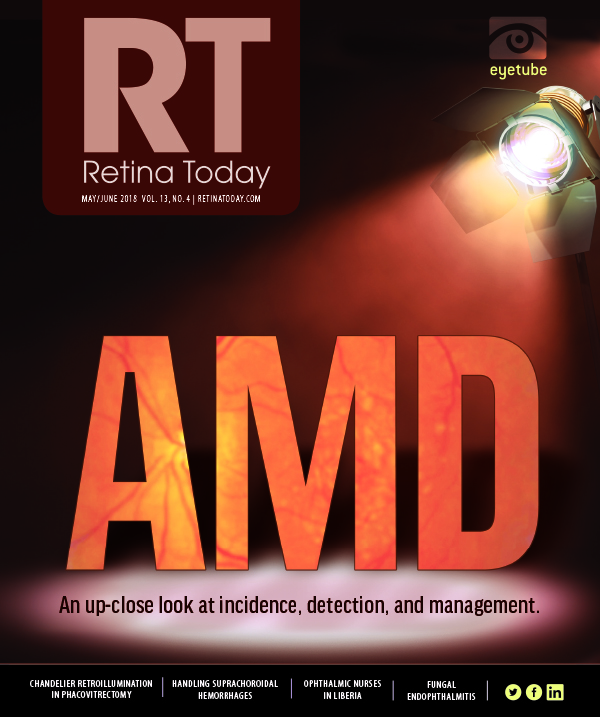 Technique provides visibility for capsulorrhexis and other steps without requiring an additional port.

Cataracts often occur concomitantly with vitreoretinal pathology. The presence of a cataract can cause impaired visibility of the posterior segment during vitreoretinal surgery and potentially suboptimal surgical outcomes. Cataract is known to develop faster once a patient has had vitrectomy.1 Phacoemulsification is also technically more difficult to perform in vitrectomized eyes because of the lack of vitreous support.2

• Combination phacovitrectomy is increasingly common, but it presents challenges for the surgeon.

• Several strategies to improve the red reflex in the presence of cataract have been proposed, but each has drawbacks.

• The use of chandelier retroillumination can markedly enhance the red reflex, even in mature cataracts, so that the lens structures can be seen more clearly.

For all of these reasons, in eyes with concomitant vitreoretinal pathology and cataract, phacoemulsification and pars plana vitrectomy are commonly performed as one combined procedure. This is especially true in today’s era of microincision surgery. Performing these two procedures at the same time is to the patient’s advantage in that it reduces recovery time and cost,3 and it provides the surgeon with an enhanced posterior segment view, clears the vitreous base, and eliminates the need for a second surgery.4 However, combined surgery is technically difficult, which may result in increases in operating times and intraoperative complications.5 The red reflex is often compromised during cataract removal due to posterior segment pathologies.5 Increased duration of surgery, posterior capsular rupture, and vitreous loss can increase the amount of inflammation and the incidence of cystoid macular edema postoperatively. Eyes with diabetic retinopathy or vitritis are already at risk for postoperative clinical or angiographic macular edema, so the need for cataract surgery adds to the risk. Figure 1. A single sclerotomy is made in the inferotemporal quadrant, 3.5 mm from the limbus. Figure 2. The 25-gauge chandelier tip is introduced after insertion of a valved cannula. Capsulorrhexis can be performed under retroillumination without dye. Figure 3. Phacoemulsification is accomplished with ease without the use of the microscope light with the help of chandelier illumination. Figure 4. Retroillumination is especially helpful for visualizing the posterior capsule for removal of cortex.

To overcome the challenges in eyes with compromised red reflex, numerous techniques have been described.6,7 Proposed solutions have included staining the anterior capsular with dye and the use of intravitreal endo-illumination, held either by the surgeon or an assistant. Each of these has disadvantages, however. Corneal endothelial toxicity is a potential complication of staining, and staining does not aid in the subsequent steps of phacoemulsification. And with handheld illumination, there is the potential for iatrogenic retinal and lens damage.7

Hence, there is a need for a safe and effective technique for enhancing the red reflex in such scenarios to optimize surgical outcomes.

Chandelier illuminating systems are now increasingly used in vitrectomy to enhance endoillumination and, at the same time, allow a bimanual approach because these systems are self-supported. In this article, we describe the use of 25-gauge chandelier-assisted retroillumination for phacoemulsification in combined cases with poor red reflex due to posterior segment pathologies.

We prefer peribulbar anesthesia for combined phacovitrectomy surgeries. Once the eye is prepped, a single sclerotomy is made in the inferotemporal or superonasal quadrant (Figure 1) at a distance of 3.5 mm from the limbus, depending on the placement of the clear corneal incision. The chandelier tip is introduced after insertion of a valved cannula that will eventually be used for infusion during vitrectomy.

The incisions for phacoemulsification are made under microscope light. The chandelier light is then turned on, and the operating microscope and room lights are turned off to enhance the fundus reflex. Continuous circular capsulorrhexis and phacoemulsification can be performed with ease using retroillumination (Figures 2 and 3).

After phacoemulsification of the nucleus is complete, retroillumination is especially useful for epinucleus removal, aspiration of cortical material (Figure 4), and posterior capsular polishing, followed by in-the-bag intraocular lens (IOL) implantation. Before proceeding to vitrectomy, the clear corneal incisions may be sutured to ensure a closed chamber, depending on the surgeon’s comfort.

In the vitrectomy phase, sclerotomies are made in the superonasal and superotemporal quadrants, followed by replacement of the chandelier tip with the infusion cannula. A standard three-port pars plana vitrectomy is then carried out, comprising core vitrectomy, complete peripheral shave, and membrane peeling and endolaser photocoagulation as needed. Figure 5. A mature cataract with vitreous hemorrhage (A). The light from the 25-gauge chandelier improves visualization enough to facilitate phacoemulsification in this mature cataract (B). IOL implantation in the bag is performed under retroillumination (C).

Although manufacturers have made significant technological improvements in today’s phacoemulsification systems, removal of mature cataracts with hard nuclei continues to be problematic. Mature cataracts presenting with vitreous hemorrhage or vitritis present a special situation, as the fundus glow is obscured not only because of the cataract itself, but also due to the vitreous pathology (Figure 5A).

In cases such as these, we use chandelier illumination to achieve retro glow. All surgical steps are essentially as described above. The light from the 25-gauge chandelier improves visualization of the anterior capsule and lens structures enough to facilitate successful capsulorrhexis and phacoemulsification, even in mature cataracts (Figure 5B), without the use of dye. The IOL can then be successfully implanted in the bag under chandelier retroillumination (Figure 5C).

To date, phacoemulsification is the most powerful, versatile, and efficient way to remove most cataracts. For a successful surgery, however, a good fundus glow is of utmost importance. Vitreous diseases such as vitreous hemorrhage or vitritis often compromise the red reflex during combined phacovitrectomy surgery.

In the past, various techniques have been described to enhance the fundus glow. Yamamoto and colleagues described a two-step technique, in which the anterior capsule is stained with trypan blue dye for capsulorrhexis and retroillumination is achieved with a conventional handheld endoilluminator.6 The endoilluminator can be used in different ways, whether held by an assistant or controlled by the surgeon.7 Use of a light pipe guard has also been reported in an attempt to minimize complications.8

Although use of endoillumination has the advantage that it does not require any special instruments, the technique has its own drawbacks. Performing phacoemulsification with an endoilluminator in one hand requires a long learning curve. It is associated with an increased risk of iatrogenic retinal tears and posterior capsular damage. Chandelier illumination, by contrast, has the advantage in that it is self-supporting, thus facilitating the surgeon’s comfort.

We performed a prospective case series of 30 cases in which the red glow was absent due to vitreous hemorrhage.9 All patients underwent phacovitrectomy, and in each procedure the chandelier technique was successfully used to achieve red glow for phacoemulsification. In our study, the use of chandelier retroillumination markedly enhanced the red reflex so that the lens structures, especially the lens capsule, could be seen more clearly.9 Staining of the anterior capsule was not needed in any case. Excellent visualization of the posterior capsule made capsular polishing easier, thus reducing the risk of posterior capsular opacification. In addition, there is no extra step or incision needed for chandelier retroillumination, as the chandelier tip is replaced with the infusion cannula when the vitrectomy phase of surgery begins.

Admittedly, there is a theoretical risk of movement of the chandelier tip, which could induce retinal breaks and lens damage.10 We have not observed any retinal complications in our experience with this technique.9 Moreover, lens damage is inconsequential because cataract surgery is undertaken simultaneously.

A PERFECT FIT FOR CHANDELIER-ASSISTED

Eyes with poor red reflex pose a challenge for anterior segment surgeons. We propose that chandelier-assisted retroillumination represents a safe and effective option to add to the surgeon’s armamentarium for use in combined phacoemulsification and vitrectomy cases. It requires no additional cannula port for chandelier insertion and, in fact, the same cannula port is subsequently used for infusion during the vitrectomy phase, meaning no added trauma from creation of an additional port. n