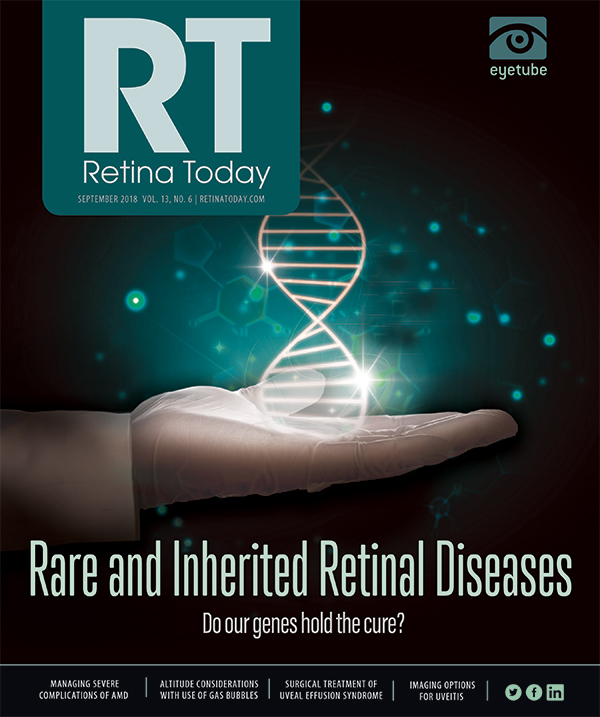 The Role of Surgery in Managing Severe Complications of Neovascular AMD

Some patients who do not respond to anti-VEGF therapy may benefit from surgical intervention.

Age-related macular degeneration (AMD) is a leading cause of vision loss worldwide. The wet form of AMD is characterized by choroidal neovascularization (CNV), and at present intravitreal injections of anti-VEGF agents is the mainstay of treatment. Nevertheless, vitreoretinal surgery has always played a fundamental role in the management of patients with advanced AMD, when anti-VEGF therapy does not achieve an optimal response or when the complications of CNV cannot be managed with intravitreal injections alone.

• Macular translocation can be effective in patients with advanced AMD, but it can be associated with serious complications.

• Displacement of submacular hemorrhage can be achieved with combinations of surgery and subretinally infused drugs.

There are three main options for treating severe cases of neovascular AMD surgically, especially when the effects of anti-VEGF treatment are insufficient: macular translocation, submacular hemorrhage displacement, and, more recently, the removal of epiretinal membrane (ERM) or vitreomacular traction (VMT).

Macular translocation is one of the oldest surgical procedures used by vitreoretinal surgeons to manage CNV before the advent of anti-VEGF therapy. This arduous operation involves detachment of the retina, including the macula, in order to move or translocate the fovea from the diseased area of the retinal pigment epithelium (RPE) onto healthy RPE. Although there have been reports of case series with quite good visual outcomes after the surgery, severe complications can arise during the process of retinal displacement.1,2

Another challenge in the management of complications related to CNV in AMD is the presence of a thick submacular hemorrhage. In cases in which this occurs, patients can experience a sudden and severe vision loss that often results in VA values of 20/200 or worse.3

Because of the poor prognosis, attempts have been made to remove the blood from the submacular space. Many treatments for submacular hemorrhage have been investigated, including anti-VEGF injection alone, with or without tissue plasminogen activator (tPA); intraocular tPA with gas and anti-VEGF injection; and intravitreal gas injection alone.4,5 More complicated cases, however, usually require the use of pars plana vitrectomy (PPV).

In one segment of the Submacular Surgery Trials (Group B), patients with hemorrhagic choroidal neovascular lesions were randomly assigned to observation or to vitrectomy with active removal of both the clot and the choroidal neovascular membrane. Only limited visual improvement was seen in the treated group compared with patients who were observed. Investigators used tPA in only 38% of the cases.6

In another study, vitrectomy with subretinal tPA infusion and active removal of the clot resulted in modest visual outcomes, but the study was limited by the requirement of a 45-minute waiting period between submacular tPA injection and evacuation of the hemorrhage.7

Chang et al investigated the outcomes of PPV, subretinal tPA infusion, and intraocular gas tamponade with or without postsurgical anti-VEGF injection for thick macular hemorrhage due to wet AMD.8 These authors reported good results regarding the displacement of the thick hemorrhage, and patients achieved better visual outcomes in early postoperative follow-up. The authors also noted the fundamental role of anti-VEGF therapy in maintaining postoperative improvements in VA.

Hillenkamp et al proposed the combination of vitrectomy with the subretinal application of both recombinant tPA and bevacizumab (Avastin, Genentech), followed by intravitreal gas injection to treat patients with wet AMD complicated by acute submacular hemorrhage.9 Their aim was to simultaneously displace the submacular hemorrhage from the fovea and effectively reduce choroidal neovascular activity. They reported good results in terms of safety, compatibility of the two subretinally infused drugs, and efficacy, adding another option for retina surgeons to manage these challenging cases.

REMOVAL OF MEMBRANES AND TRACTION

A third area in which vitreoretinal surgery may assume a fundamental role in eyes with advanced wet AMD is seen in eyes with coexisting neovascular AMD and VMT and/or ERM. In these situations, it is by now well established that the presence of vitreomacular adhesion or VMT can play a crucial role in hindering response to anti-VEGF agents in some patients with wet AMD.

The relationship of the attached posterior hyaloid and neovascular AMD was first demonstrated in 2000.10 In that study, Ondes and colleagues also documented the positive effect of PPV on regression of active neovascularization.

In 2008, Mojana et al analyzed the efficacy of vitrectomy plus gas tamponade without internal limiting membrane peeling followed by anti-VEGF injections in patients affected by VMT and wet AMD resistant to anti-VEGF therapy.11 They reported a modest improvement in BCVA and a decrease of retinal thickness with this approach.

More recently, it has been suggested that the coexistence of AMD and ERM are related to a higher incidence of subretinal fluid and more profound changes in the ellipsoid zone, increasing the need for frequent anti-VEGF injections.12 A patient with neovascular AMD and vitreomacular adhesion refractory to anti-VEGF therapy was seen in our ophthalmology department, where she was successfully treated with PPV (Figure). The role of vitrectomy with internal limiting membrane peeling in the presence of VMT or ERM and wet AMD was studied in a small cohort of six patients refractory to anti-VEGF agents. The patients became responsive to this treatment after the procedure, demonstrating the efficacy of vitreoretinal surgery in such challenging cases.13

Although intravitreal injections of anti-VEGF agents remains the first-line therapy in the treatment of neovascular AMD, retina experts often face difficult situations, such as patients with thick submacular hemorrhages and ERMs, in which the effects of anti-VEGF agents are unsatisfactory. In those conditions, the role of vitreoretinal surgery, in association with the use of intravitreal anti-VEGF injections, is fundamental to resolving the complications caused by the process of CNV and allowing these patients to achieve better visual results.