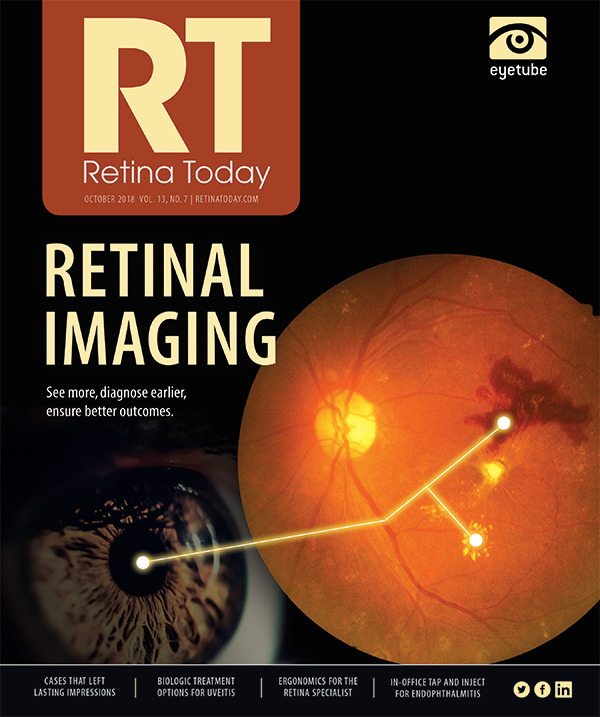 New capabilities make it possible to more accurately assess and follow peripheral pathologies across a range of retinal diseases.

The peripheral retina is a critical element in the effective diagnosis, management, prognosis, and follow-up of diabetic retinopathy (DR) and retinal vascular diseases such as retinal vein occlusion (RVO). As early as the 1970s, experts in our field recognized that abnormalities in the periphery likely had clinical significance,1 but it would be several decades before technology to easily and effectively capture images of the periphery would be readily accessible. Figure 1. The SSF overlay on a UWF image shows how much peripheral retina is missed with standard imaging in diabetes evaluation.

The ability to easily and quickly capture images of the peripheral retina has provided insights into the importance of disease-related pathology that was previously unavailable. For example, using ultra-widefield (UWF) retinal imaging, Silva et al showed that patients with DR with predominantly peripheral lesions had a more than fourfold greater chance of progressing to proliferative disease than those with more centrally located retinopathy.2 Use of UWF imaging in DR management has grown since research validated that it is at least as sensitive and specific as ETDRS seven-standard-fields (SSF) montages,2 and that it has the potential to reveal more pathology than conventional imaging (Figure 1).3,4 Additionally, UWF retinal imaging has helped doctors recognize the importance of examining the periphery in various other diseases such as uveitis and AMD.5,6

The optomap UWF technology is the only commercially available system that can image beyond the vortex ampullae (up to 200° or 82% of the retina) in a single capture. Optomap technology is available in three product platforms: California, Daytona, and Monaco, which each offer various combinations of optomap color, autofluorescence, fluorescein angiography, and indocyanine green angiography modes and (with Monaco) can be paired with integrated spectral-domain OCT.

The Clarus was designed to generate fundus images that closely resemble the coloration of the fundus as seen during clinical examination. A single Clarus image can capture up to 133° of the retina with resolution of 7 µm. In addition to true color imaging, it also captures high-resolution fundus autofluorescence images, infrared images, and external eye images.

The Spectralis offers two widefield imaging modules, both of which require the purchase and use of add-on lenses. The 55˚ lens can be used for all Spectralis fundus imaging modalities including multicolor, autofluorescence, infrared reflectance, angiography, and OCT. A 150° angiography add-on module is also available. The Spectralis Ultra-Widefield Imaging Module can be used to capture the macula, the optic nerve head, and areas beyond the vessel arcades in a single image.

The terms widefield and UWF imaging are frequently used without a clear agreement on the definitions of the terms. However, a consensus group of retinal imaging experts recently formalized a definition of the terms based on anatomic landmarks. UWF has been defined by researchers as technology that describes images that, in a single image capture, include at least four vortex ampullae (structural landmarks in the retina near the far periphery). Widefield images capture the posterior retina up to the vortex vein ampullae. Widefield images can be montaged to create an UWF field of view, but that technique requires significantly more time for capture and montaging. (See the sidebar for a list of devices that offer UWF imaging capabilities.)

The consensus group also defined the term panretinal as a goal that would allow for imaging for the entire retina. No technology can do this in a single-capture image. It is important for clinicians interested in assessing the peripheral retina using imaging technology to understand the differences between widefield and UWF technologies so that they can be used more effectively.

Ideally, we want to use UWF capabilities to quantify peripheral pathologies and changes to these pathologies over time, but, until recently, such measurements were inherently inaccurate due to the challenges that occur when a 3D spherical surface is projected onto a flat surface. The common representation of the world on a flat map, called a Mercator projection, is helpful for visualizing this effect. Although useful for ship navigation, a Mercator projection grossly distorts the size of land masses closer to the poles. Most notably, Greenland appears to be about the same size as the entire African continent on a Mercator projection, when in reality it is only about the size of one country in Africa (Figure 2).

Figure 2. A Mercator projection-style map (left) distorts landmasses (such as Greenland) in the periphery. A homolosine projection (right) shows a more accurate representation of Greenland’s size.

• Researchers have developed an SS-OCT system that is capable of imaging the whole eye and performing quantitative optical biometry. In addition, the device is able to image details of the vitreous gel near the retina and crystalline lens.

• The technology could provide insight into how parts of the eye interact and the effect of opacities on visual function. This information could, in turn, lead to new applications for OCT.

The type of distortion seen in a Mercator projection is also a problem in retinal imaging, and the wider the field of view, the greater the potential for nonlinearity. In other words, a line drawn near the posterior pole will be very different in true size from one drawn in the periphery, even if they appear to be the same length on a flat monitor.

Optos has incorporated a measurement algorithm that calculates the position of each pixel and then translates that into square millimeters, providing a consistent geometry that accurately represents anatomic features in the retina. This algorithm allows users to measure distance and area anywhere on the retina or to identify an area of clinical interest with confidence that comparisons to other areas of the retina and to future images will be accurate.

This new algorithm opens the door to a number of clinical applications. Perhaps most obvious is the ability to accurately measure the size of lesions in the retina and to observe how they change over time or in response to treatment. With a malignant lesion such as ocular melanoma, it is imperative to know precisely whether the tumor has remained the same, regressed with treatment, or increased in size. It is also helpful to know how much of the retina is being affected by a pathology such as macular edema and how that changes in response to an anti-VEGF injection or steroid treatment.

Optos UWF technology captures about 82% of the retina in a single image. Of course, a careful dilated fundus examination is still needed to visualize 100% of the retina, but, even in these cases, the UWF image is important for precise measurement, documentation, and visit-to-visit comparisons. When SSF imaging became the gold standard for DR management, it represented a compromise between the excessive time needed to capture the 20 to 30 fields required to document 100% of the retina and getting a “wide enough” view in a more reasonable timeframe. Figure 3. With this optomap automontage image, 97% of the retina is visible.

UWF images show more retina in a single capture than SSF imaging can in much less time. Additionally, the Optos automontage feature increases the portion of the retina that can be captured without dilation to 220˚(or 97%) of the retina (Figure 3), by combining four gaze-steered images (up, down, left, and right). Applications for panretinal imaging have yet to be investigated, but it is likely that such applications will begin to emerge now that the capability is available.

THE BEST IS YET TO COME

As noted above, we know that patients with primarily peripheral DR are at higher risk of progression.1 Now that we can accurately measure the extent of pathology in the peripheral retina, we can begin to conduct more sophisticated analyses of exactly how retinal diseases progress.

We are in the infancy of utilizing the quantification of retinal pathology in UWF imaging to further our understanding of the pathophysiology of retinal disease. The technology presents exciting opportunities. It is my hope that this will lead to better approaches to disease management and more effective treatment protocols for our patients.