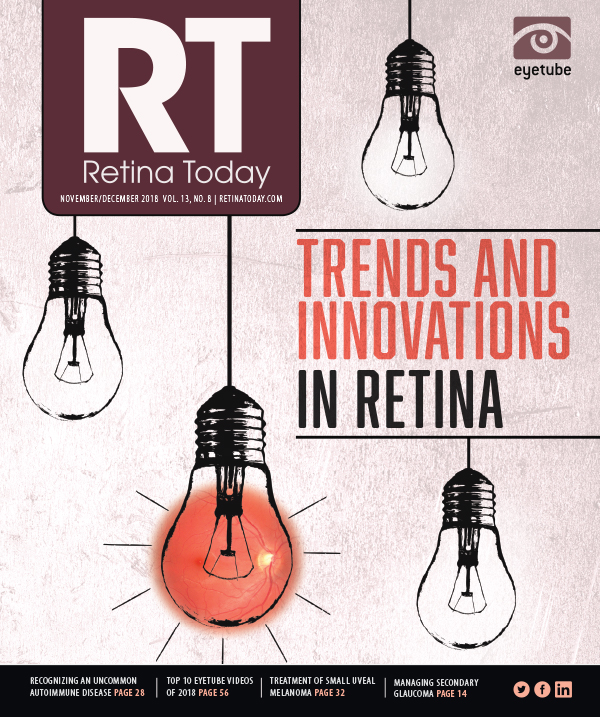 A close look at an uncommon autoimmune disease.

A 72-year-old Caucasian man presented to our office for cataract evaluation. His chief complaint was blurry vision. His medical history was positive for type 2 diabetes mellitus, well-controlled with metformin, and hypercholesterolemia. He denied smoking and reported occasional alcohol consumption. The patient’s BCVA was 20/40 in the right eye (OD) and 20/50 in the left eye (OS). IOP at presentation was 14 mm Hg OD and 15 mm Hg OS. VKH disease is a multisystem autoimmune inflammatory disorder with neurologic, skin, auditory, and ocular manifestations.1 This disease primarily affects individuals with dark skin pigmentation. In a patient like ours, a white man, VKH is noted as being “distinctly uncommon.”2 The pathogenesis of VKH is not well understood. Evidence suggests that the target of autoimmunity is a melanin-associated antigen.2 Xu et al found that serum interleukin-25 was significantly lower in patients with VKH than in a control group. However, the significance of this finding has yet to be discovered.3 A retrospective analysis found that 93.8% of VKH patients tested were HLA-DR4 positive.4 Unfortunately, neither of those findings are specific to VKH; only clinical findings can lead to a diagnosis of VKH.5

The diagnostic criteria for VKH are not widely agreed upon. There have been several sets of proposed criteria for diagnosing the disease, but each set takes a slightly different approach. The Diagnostic Criteria for VKH Disease proposed by Yang and colleagues were based on data from 659 patients in northern China.6 These data are detailed in the Table on the next page. Definitive diagnosis of early-phase VKH disease can be made based on three variants:6 • Variant 3: Patients already treated with systemic corticosteroids with or without immunosuppressive agents who have a history of typical appearances of variant 1 or 2 as well as criteria A-C and D5.

• Variant 1: Patients presenting with criteria A-C as well as E1 and E2.

• Variant 2: Patients presenting without sunset glow fundus or visible pigment alterations; criteria A-C, E2, and either E3 or E4 must be met.

VKH presents in four clinically distinct stages: prodromal, uveitic, convalescent, and chronic recurrent.1 The prodromal stage occurs during the first 3 to 5 days of the disease process and is characterized by neurologic findings such as tinnitus, neck stiffness, and hearing loss. Examination of cerebrospinal fluid will reveal lymphocytic pleocytosis, which can last several weeks.

The uveitic phase marks the beginning of ocular manifestations. Diffuse choroiditis with multiple locations of exudative retinal detachments and optic disc swelling are common.1 As the disease progresses to the convalescent stage, integumentary findings, such as poliosis, vitiligo, alopecia, and choroidal depigmentation, described as sunset-glow fundus, may present.1 The chronic recurrent phase is characterized by recurrent granulomatous anterior inflammation.2 Patients at this stage present with higher rates of sunset-glow fundus, Dalen-Fuchs nodules, cataracts, and ocular hypertension.2

A review of 32 patients at a tertiary uveitis clinic in Turkey provided some understanding of symptom distribution for VKH.7 Sixteen patients (16%) presented with acute uveitic disease, four of whom (25%) experienced recurrent inflammation. Of those with acute uveitic disease, 75% experienced exudative retinal detachment with optic disc edema or hyperemia, and the other 25% presented with only optic disc involvement.7 Perhaps the most important finding of this study was that only 31.2% of patients experienced all three manifestations of the disease (dermatologic, neurologic, and ocular).

Treatment of VKH involves the use of an immunosuppressive agent with steroidal and nonsteroidal therapy. A recent study by Herbort and colleagues found that a therapeutic window of opportunity exists during the initial 2 to 3 weeks of the disease process that may lead to complete remission.8 They found corticosteroid monotherapy to be inappropriate and ineffective, even when given within the therapeutic window of opportunity. Instead, they recommended a combination of corticosteroids with first-line nonsteroidal immunosuppressive therapies, such as cyclosporine, azathioprine, mycophenolate mofetil, and anti–tumor necrosis factor-alpha agents. Treatment should aim not just at remission of symptoms but also remission of choroidal subclinical disease, as monitored by indocyanine green angiography.8

A report by Budmann, Franco, and Pringe discussed long-term treatment with infliximab (Remicade, Janssen) and methotrexate in a pediatric patient over a 10-year period with no recurrences.10 However, when discontinuation of infliximab was attempted after 3 years, there was a recurrence of 2+ anterior chamber cells.10

Caution should be used when treating ocular pathologies in patients with known VKH. Ranjan and Agarwal reported rebound inflammation in 43-year-old man treated with bevacizumab (Avastin, Genentech) injections for subfoveal choroidal neovascular membrane.11 Oral corticosteroids and immunosuppressants led to a resolution of his rebound exudative retinal detachment and keratic precipitates.

Finally, in contrast with other chronic uveitic conditions, macular edema is not typical in patients with VKH. Our patient had diffuse macular edema OU. Rutzen and colleagues determined that leakage of perifoveal vessels from chronic inflammation is the cause in cases such as these. They also found that macular edema in VKH responded well to sub-Tenon triamcinolone injections, resulting in improvement in VA.12

VKH disease is an uncommon autoimmune disease with a relatively well-defined clinical course. Clinical symptoms are currently the only way to diagnose VKH. Early diagnosis and treatment are key for optimal clinical outcomes and potentially complete remission of the disease, but all patients with VKH can benefit from a combination of steroidal and immunosuppressive therapies.