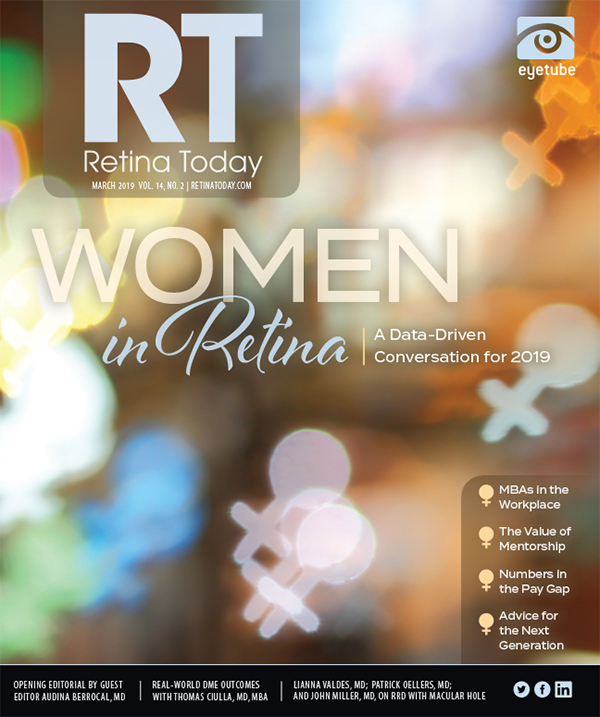 Lower hemoglobin A1c levels were associated with better improvement in VA in patients with diabetic macular edema (DME) who participated in the Diabetic Retinopathy Clinical Research Network (DRCR.net) Protocol T study. These results, based on an analysis of data from the randomized clinical trial, were published in JAMA Ophthalmology in January.1

Protocol T included 660 patients with DME randomly assigned to receive aflibercept (Eylea, Regeneron), bevacizumab (Avastin, Genentech), or ranibizumab (Lucentis, Genentech). This post-hoc analysis of data from 578 patients was conducted to identify baseline factors associated with visual and anatomic outcomes in patients with DME treated with these anti-VEGF agents and to determine whether there were interactions between these factors and the selection of anti-VEGF agent. No significant differences among the anti-VEGF agents were seen in any of the VA or anatomic outcomes analyzed.

For each 1% increase in hemoglobin A1c levels, VA improvement was reduced by 1 letter in the VA analysis. Eyes with no previous panretinal photocoagulation (PRP) and less- than-severe nonproliferative diabetic retinopathy had better VA outcomes than eyes with previous PRP.

“Younger patients and those without prior PRP might expect greater improvement in VA than older patients or those with prior PRP,” the authors concluded.

In a randomized head-to-head comparison of two anti-VEGF agents using a treat-and-extend regimen in patients with wet age-related macular degeneration (AMD), neither was superior to the other in average VA gains or number of injections at 1 year. The results of a 12-month interim analysis of the 2-year RIVAL trial were published in JAMA Ophthalmology in January.1

Conducted at 24 sites in Australia, the trial included 281 treatment-naïve eyes of 281 patients with active neovascularization secondary to AMD. Patients were randomly assigned to receive 0.5 mg ranibizumab or 2.0 mg aflibercept with a treat-and-extend regimen after three monthly loading doses. BCVA assessors and a central reading center that determined treatment intervals were masked to treatment assignments. Primary endpoints were mean change in BCVA letter score and number of injections.

“Further follow-up to 2 years may determine if advantages of one [anti-VEGF agent] over the other can be identified,” the authors noted.

The primary endpoint was not reached in a phase 3 study of a gene therapy for Leber hereditary optic neuropathy (LHON), according to the therapy’s developer. Based on preliminary analysis of the safety data, GS010 was well-tolerated through 48 weeks, the company said in a press release.

RESCUE is a phase 3 clinical trial evaluating the safety and efficacy of a single intravitreal injection of GS010 (rAAV2/2-ND4) in 39 individuals whose visual loss due to 11778-ND4 LHON occurred up to 6 months prior to study treatment. Patients in RESCUE will be evaluated again at 72 and 96 weeks, with results to be available later this year. GenSight has two other ongoing phase 3 trials in patients with LHON, REVERSE and REFLECT.

The US FDA granted orphan drug designation to a gene therapy candidate from Ocugen, the company announced in a press release. OCU0400 is a novel gene therapy being developed for the treatment of NR2E3 mutation–associated retinal degenerative disease. OCU0400 consists of an adeno-associated virum serotype 5 capsid containing the gene for human nuclear hormone receptor, NR2E3.

This is the first program that Ocugen is advancing based on its modifier gene therapy platform, which, unlike single gene replacement therapies, “represents a powerful and broad means of treating a variety of genetically diverse inherited retinal diseases (IRDs) with a single product,” according to the company.

Ocugen said it plans to initiate a phase 1/2a clinical study by 2020. An intravitreal implant that delivers steroid to the posterior segment for up to 3 years was commercially launched in the United States in February. The 0.18 mg fluocinolone acetonide micro-insert (Yutiq, EyePoint Pharmaceuticals) was approved by the FDA last October, indicated for treatment of chronic noninfectious uveitis affecting the posterior segment.

The implant is supplied in a sterile single-dose preloaded applicator that can be administered in the physician’s office, the manufacturer noted in a press release. The implant provides continuous dosing that avoids the peaks and valleys of local corticosteroids, according to the company. It is designed to release its drug consistently for up to 36 months. In clinical studies, the implant significantly reduced the number of inflammatory uveitis eye flares compared with sham treatment.

In a multicenter randomized phase 2 study, Renexus was shown to slow the progression of retinal degeneration in patients with Mac Tel compared with participants who received a sham treatment. Based on the positive phase 2 results, two parallel phase 3 studies are enrolling patients in the United States, Australia, and Europe to determine the safety and efficacy of Renexus for the treatment of Mac Tel, according to the company.

Janssen Pharmaceutical has received an exclusive worldwide license for the IRD gene therapy portfolio of MeiraGTx, a gene therapy company. The license includes product candidates for achromatopsia, caused by mutations in either CNGB3 or CNGA3, and for X-linked retinitis pigmentosa. The companies have also formed a research collaboration to explore new targets for other IRDs and to further develop manufacturing technology for adeno-associated viruses. The agreement was announced in a January press release from Janssen Pharmaceutical Companies of Johnson & Johnson.

Preclinical Trial of Laser for Dry AMD HAS Begun

Lutronic Vision has begun a preclinical trial to determine the optimal setting for its R:Gen laser for the treatment of dry age-related macular degeneration. The study will be performed by investigators at the University of Southern California. At the conclusion of the study, Lutronic Vision, a subsidiary of Lutronic, will be ready to initiate clinical evaluation of its laser’s ability to treat dry age-related macular degeneration, according to a press release from the company.

The R:Gen laser has been cleared by the FDA for selective laser treatment of retinal pigment epithelium in eyes with clinically significant macular edema.

DORC has introduced several updates to its Eva phacovitrectomy surgical system aimed at improving OR efficiency and surgical performance, the company announced. Improvements include a redesigned footpedal now incorporating control of the Eva endolaser, eliminating the need for a second pedal. The footpedal has also been redesigned ergonomically to improve surgeon comfort. Another enhancement is a new LED light source to provide improved illumination through the company’s 27-gauge light fibers that were launched in 2018.

The CE Mark for the enhancements was received late last year, and they are to be commercially available in the European Union in March, the company announced in a press release. Clearances in Japan and the United States (where the company’s subsidiary is known as Dutch Ophthalmic USA) are to follow, the company said.

As the US FDA faces “a surge of cell and gene therapy products entering early development,” officials are planning to staff up with additional clinical reviewers to help handle an increased volume of investigational new drug (IND) applications. An “eventual goal” is to hire 50 new clinical reviewers for the group charged with overseeing the clinical investigation, development, and review of cell and gene therapy products, according to an FDA statement released in January.1

FDA Commissioner Scott Gottlieb, MD, and Director of the Center for Biologics Evaluation and Research Peter Marks, MD, PhD, said in the statement that, based on the numbers of IND applications being submitted in these fields, “we anticipate that the number of product approvals for cell and gene therapies will grow in the coming years, reflecting significant scientific advancement and the clinical promise of these new innovations.”

In addition to the staffing increases, the officials said, the FDA is also planning to work with sponsors to use expedited review and accelerated approval when possible. Further, a series of guidance documents is planned, providing recommendations on product development issues related to the development of gene therapy products.