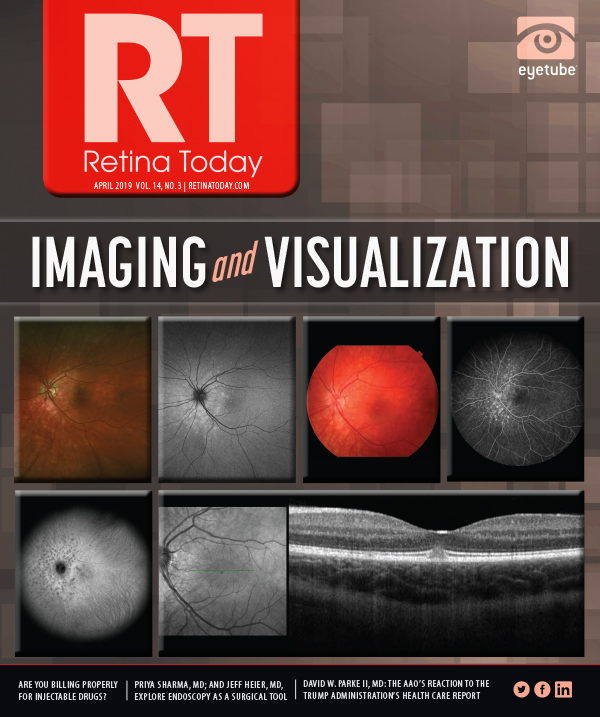 Correlation of OCT Angiography and Microperimetry in Wet AMD

Multimodal imaging can shed new light on disease processes and provide precise data in the clinic.

Retina subspecialists use a variety of imaging platforms to document the status of patients with wet age-related macular degeneration (AMD), including fundus photography, OCT, and fluorescein angiography (FA). Given that FA is an invasive procedure that can cause side effects such as extravasation, nausea, vasovagal reaction, and anaphylaxis, retina subspecialists are generally reluctant to use it in children or patients who are pregnant or have allergies.1 Two relatively new noninvasive imaging modalities, employed in the case studies presented below, can be used to supplement these conventional imaging platforms.

• A pair of noninvasive imaging examinations administered to patients with wet AMD—OCTA and fundus-driven perimetry—can provide investigators with new data about the structure and function of the retina.

• Results from OCTA and fundus-driven perimetry can often be correlated, with one test buttressing information provided by the other test.

• Use of these two platforms together may provide investigators with additional data about the effects of therapeutic agents.

OCT angiography (OCTA) is a noninvasive imaging modality that generates 3D maps of microvasculature flow patterns, from the retinal capillary plexus to the choroidal vasculature.2,3 It does not require use of exogenous dyes, and it can be repeated during follow-up visits. Our practice employs the RS-3000 Advance OCT (Nidek). Other OCTA platforms include the AngioVue OCTA (Optovue), the Spectralis OCTA (Heidelberg), and the AngioPlex (Carl Zeiss Meditec). The Plex Elite 9000 (Carl Zeiss Meditec), which is available for clinical research purposes only, also performs OCTA.

There have been significant advances in the assessment of retinal morphology with the use of FA, OCT, and OCTA in clinical practice. Still, there is room to better understand how structure, as seen on imaging of patients with wet AMD, is connected with function.

Microperimetry measures local retinal sensitivity to provide functional assessment of the retina.4 It is a subjective, noninvasive, quantitative diagnostic test that can be used to enhance our understanding of the correlation of retinal function with retinal morphology.5 In my office, we use the Microperimeter MP-3 (Nidek) for this.

Microperimetry, also known as fundus-driven perimetry or fundus-related perimetry, is a type of visual field test that can create maps of retinal sensitivity. It has advantages over conventional perimetry, including providing real-time fundus imaging, employing eye-tracking technology, and boasting fast acquisition times.6,7 The fundus view allows the user to position the stimuli in the retinal area of interest, allowing specific structure-function associations to be evaluated.

Fundus-driven perimetry measures local retinal sensitivity in the dynamic range of 0 to 34 dB to provide functional assessment of the retina.8 The software of the MP-3 calculates and compensates for the refractive error of patients. Its standardized stimulus grid consists of 37 stimuli overlying the central 12°. It employs a Goldmann III stimulus with a duration of 200 ms, a 4-2 threshold strategy, and a red circle fixation target. A single central foveal response forms the center point, and four concentric rings of retinal loci at 1°, 2°, 4°, and 6° surround it.4 Recordings are considered reliable when false positive responses are less than 25%.

This article uses a series of case studies to explore the correlation of fundus-driven perimetry centered on the fovea, covering a 12° field of view, with OCTA images in a 3 x 3 mm area (10° x 10° field of view). We used the combination of these two diagnostic modalities in a series of patients with wet AMD treated with intravitreal anti-VEGF injections (see the case series). After the patient received one dose of anti-VEGF therapy, BCVA improved to 6/18 OD (Figures 1D-F). After two more treatments, submacular scarring was observed on fundoscopy, and reduction in CRT to 233 µm was noted on SD-OCT (Figure 1G) in the presence of submacular scarred CNVM. OCTA showed gradual shrinkage of the vascular network with loss of peripheral branching and anastomosis (Figure 1H, red arrow), and corresponding increased retinal sensitivity was noted on fundus-driven perimetry, as represented by yellow colors (Figure 1I). A 66-year-old man presented with decreased VA in his left eye for 1 month with a BCVA of 6/36 OS. Fundus examination revealed subretinal hemorrhage, a subfoveal gray-colored membrane, and macular edema. SD-OCT revealed subretinal CNVM and minimal subretinal fluid (SRF) with a CRT of 488 µm (Figure 2A). OCTA at the choroid level showed increased decorrelation signal corresponding to a neovascular network with peripheral arcades and dense anastomosis (Figure 2B, red arrow). Fundus-driven perimetry showed decreased retinal sensitivity in the form of red-yellow colors corresponding to the neovascular network on OCTA (Figure 2C).

After three monthly anti-VEGF injections, BCVA improved to 6/24 OS, with submacular scarring and resolution of SRF on SD-OCT, resulting in a CRT of 456 µm (Figure 2D). OCTA showed shrinkage of the neovascular network with loss of peripheral arcades and anastomosis (Figure 2E, red arrow), and corresponding increased retinal sensitivity was seen on fundus-driven perimetry, represented by yellow-green colors (Figure 2F). A 60-year-old man presented with decreased VA in his left eye for 1 month with BCVA of 6/9 OS. Fundus examination revealed a parafoveal gray-colored membrane. SD-OCT revealed a parafoveal CNVM and minimal SRF with a CRT of 441 µm (Figure 3A). OCTA at the choroid level showed increased decorrelation signal with a perilesional halo suggestive of an ill-defined neovascular network (Figure 3B, red arrow). Fundus-driven perimetry showed decreased retinal sensitivity in the form of yellow-green colors corresponding to the neovascular network seen on OCTA (Figure 3C). A 53-year-old woman presented with decreased VA in her left eye for 2 months with BCVA of 6/60 OS. Fundus examination revealed subretinal hemorrhage and a grayish subretinal membrane with a large pigment epithelial detachment (PED). SD-OCT confirmed a subretinal CNVM and PED with a CRT of 951 µm (Figure 4A). OCTA at the choroid level showed a classic branching neovascular network (Figure 4B, red arrow). Fundus-driven perimetry showed decreased retinal sensitivity in the form of red-yellow colors corresponding to the CNVM seen on OCTA (Figure 4C).

After the patient received three monthly intravitreal anti-VEGF injections, BCVA improved to 6/24 OS. Reduction in size of the PED and CNVM were observed on SD-OCT, and CRT was 380 µm (Figure 4D). OCTA (Figure 4E, red arrow) showed shrinkage of the network, and corresponding increased retinal sensitivity was seen on fundus-driven perimetry (Figure 4F), represented by yellow colors. Per standard treatment regime, she was observed without anti-VEGF injections for 6 months.

At 6 months after baseline, a fresh subretinal hemorrhage was observed, and BCVA dropped to 6/60 OS. SD-OCT showed recurrence of the CNVM along with SRF (Figure 4G). OCTA (Figure 4H) revealed emergence of a new neovascular network (red star) along with regrowth of the old network (red arrow), and retinal sensitivity was again decreased on fundus-driven perimetry (Figure 4I).

After another anti-VEGF injection, the patient returned (now 7 months from first presentation) with a CRT of 541 µm (Figure 4J). OCTA (Figure 4K) showed a small reduction in network size and slight increase in retinal sensitivity on fundus-driven perimetry (Figure 4L).

For decades, BCVA has been the main indicator of visual function in retinal diseases. This metric, however, is based on responses from foveal cones, and it does not represent a comprehensive assessment of macular function. This is particularly true for patients with AMD, whose visual function depends on the volume and location of the pathologic neovascular network and subretinal fluid.

Functional testing in and around the areas of a choroidal neovascular membrane may provide information about the severity and extent of disease in the macula and the potential consequences of therapy. Recently, microperimetry with the MP-3 device has provided effective fundus-correlated functional testing, with test-retest reliability for the same test point, precise assessment of the location and stability of fixation, and compensation for ocular movements.8 By incorporating these features, the MP-3 has become our clinical investigational device of choice to assess residual visual function and functional vision beyond the fovea in macular diseases.

Fundus-driven perimetry on MP-3 can document macular function, help monitor progress on follow-up, and help to determine the prognosis of disease. Adding to the clinical picture, OCTA is a noninvasive tool that produces 3D analyses of choroidal neovascular membranes and provides structural information regarding neovascular networks.

Overlaying results of these two testing modalities can provide new insights into the understanding of disease processes that have never been explored previously. Combining the findings of OCTA and microperimetry provides investigators and clinicians with precise information regarding the correlation of structure and function at presentation and after treatment.