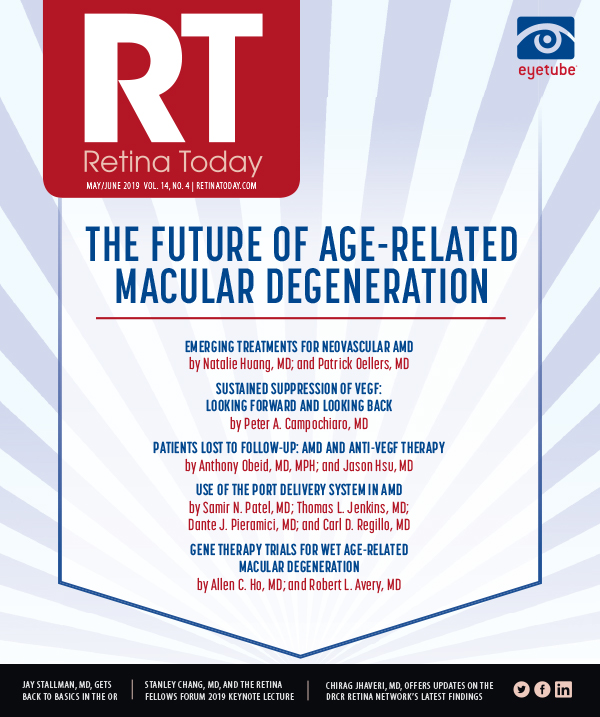 US FDA Approved Aflibercept for Treatment of Diabetic Retinopathy

The US FDA in May approved the use of aflibercept (Eylea, Regeneron) for the treatment of all stages of diabetic retinopathy (DR). The approval was based on 6-month and 1-year results from the PANORAMA randomized, multicenter, phase 3 clinical trial, according to a press release from Regeneron. “The prevention of worsening [of DR] with [aflibercept] provides a compelling rationale for early treatment of patients with this disease, particularly since eyes dosed with [aflibercept] as infrequently as every 16 weeks showed significant improvements in the pivotal PANORAMA trial,” said David Brown, MD, a participant in the trial, as quoted in the press release.

The PANORAMA trial included three arms: a sham injection group and two treatment groups that received aflibercept every 8 or every 16 weeks after a period of monthly loading doses. The primary endpoints were the proportion of patients who experienced a 2-step or greater improvement on the DR severity scale from baseline for the combined treatment groups at week 24, and for each treatment group separately at week 52.

AR-13503 is a bioerodible polymer implant that provides controlled release over a sustained period. It is designed to be administered approximately once every 6 months by intravitreal injection. Preclinical studies suggest that AR-13503 has the potential to inhibit angiogenesis, preserve the blood-retina barrier, and reduce retinal fibrosis in retinal diseases such as wet AMD and DME, while potentially reducing the treatment burden associated with more frequent intravitreal injections.

Allergan shareholders in May voted down a nonbinding proposal that sought an immediate split of the roles of chairman and chief executive, with 61.3% of shareholders backing chairman and CEO Brent Saunders, as reported by Reuters. The hedge fund Appaloosa LP made the proposal, arguing that Allergan has a questionable business strategy and excessive pay for executives, according to Reuters.

The pharmaceutical firm Roche has extended its tender offer for Spark Therapeutics for a second time as the US Federal Trade Commission continues to review the proposed transaction, according to a press release from Roche.

Roche noted that the Federal Trade Commission’s “review of the transaction is ongoing, and the parties are actively working with the government to facilitate that process.” According to Roche, the offer period will be extended until June 3, having previously been scheduled to expire on May 2. The Swiss drug maker indicated that all terms and conditions of the offer remain unchanged, adding that as of April 25, only 26.1% of Spark’s outstanding shares had been validly tendered, down from a previous level of 29.4%.

The delay comes as Spark shareholders have filed a number of lawsuits seeking to block the deal on the grounds that it undervalues the Spark and is unfair to investors.

Carl Zeiss Meditec introduced the Plex Elite 2.0, which is, according to the company, the first dual-speed swept-source OCT/OCT angiography, at the ARVO Annual Meeting. The device will scan at 200 kHz as well as 100kHz, providing doctors more detailed views into the retina. Varying speeds can be applied to different disease states in the eye and expand research possibilities, the company said in a press release.

Aflibercept had previously received FDA approval for the treatment of patients with neovascular (wet) age-related macular degeneration (AMD), macular edema following retinal vein occlusion, and diabetic macular edema (DME). PANORAMA was the first prospective trial to study whether an anti-VEGF agent can help prevent worsening disease in patients with nonproliferative DR without DME, according to the company.

In eyes with center-involving DME with good vision, observation without treatment until VA worsens was equivalent to treatment with aflibercept or laser photocoagulation in preventing vision loss. This was the conclusion of a study published online in JAMA: The Journal of the American Medical Association in April.1

In a randomized clinical trial including 702 eyes, there were no statistically significant differences in 5-letter or more decrease in VA at 2 years between groups initially managed with aflibercept (16%), laser photocoagulation (17%), and observation (19%), the study authors found. The trial was conducted at 91 US and Canadian sites in adults with type 1 or type 2 diabetes. Eyes included in the study had center-involving DME and VA of 20/25 or better.

At 2 years, the percentage of eyes with at least a 5-letter VA decrease was 16% in the aflibercept group, 17% in the laser group, and 19% in the observation group. The differences were not statistically significant.

The pairing of a smartphone-mounted camera and an artificial intelligence (AI) program was useful as a method of screening for DR, according to a presentation at the Association for Research in Vision and Ophthalmology (ARVO) Annual Meeting in April.

In a study by researchers at the University of Michigan’s Kellogg Eye Center, images taken in dilated eyes with a smartphone-based device called RetinaScope were analyzed using a proprietary software platform called EyeArt (Eyenuk). Images from 69 adult patients were analyzed with the software, which graded them as referral-warranted DR or non–referral-warranted DR. The research was described in a press release from the University of Michigan.

The AI results were compared with independent evaluations by two human expert graders. The automated interpretation had a sensitivity of 86.8% (greater than the 80% recommended sensitivity for an ophthalmic screening device, according to the press release) and specificity of 73.3%. One of the human graders achieved a level of sensitivity that was statistically significantly higher (96.2%), and both humans had lower specificity than the automated interpretation (40% and 46.7%).

The researchers expect to publish results of a clinic-based usability study in the near future, according to the press release.

First Center Focused on Connections Between Eye and Brain

Thomas Jefferson University in Philadelphia, in partnership with Wills Eye Hospital, has launched the world’s first center focused on the visual signatures of neurological diseases. The William H. Annesley Jr, MD, ’48 EyeBrain Center will explore connections among the retina, the optic nerve, and disorders of the brain, according to a press release from the University. Research at the new center will have the potential to reveal novel treatments for conditions such as stroke, Alzheimer disease, Parkinson disease, multiple sclerosis, and dementia, the release suggested.

The center will be housed in Jefferson’s existing center for neuroscience. One of the focuses of research at the center will involve mitochondrial function in the retina, according to the press release. Mitochondria are implicated as the final common pathway in many neurologic and ophthalmic diseases. Using multicolor OCT, a breakthrough technology, researchers can now see mitochondrial function disruption before there is cell-death or even disease symptoms, opening a new frontier in the diagnosis and treatment of several neurologic disorders.

EyewireTV
Tracking the Business of Retina

EyewireTV anchor Ranna Jaraha reports on the new imaging platform that debuted at ARVO in Vancouver. Ranna Jaraha reviews the history and future of the relationship between Novartis and Alcon, which recently split into two units. George Williams, MD, President of the American Academy of Ophthalmology, joins EyewireTV to review how prior authorization requirements interfere with patient care in a review of the AAO’s meetings with federal regulators and Members of Congress.