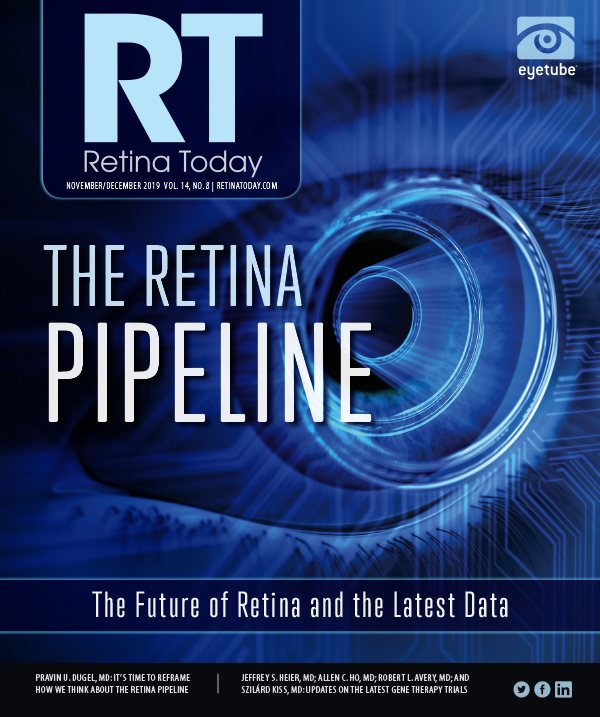 The US FDA in October approved brolucizumab (Beovu, Novartis) for the treatment of wet age-related macular degeneration (AMD). The drug is the first FDA-approved anti-VEGF agent to offer both greater fluid resolution than aflibercept (Eyelea, Regeneron) and the ability to maintain eligible patients with wet AMD on a 3-month treatment interval immediately after a monthly loading phase, according to a Novartis press release. Brolucizumab is the only anti-VEGF agent labeled to maintain eligible patients with a dosing interval as long as 3 months after a loading phase, with no compromise in efficacy, according to the company. In the clinical trials, at year 1, more than half of patients were maintained on the 3-month dosing interval.

Avacincaptad pegol (Zimura, Iveric bio), a complement factor C5 inhibitor, met the primary endpoint of reducing the rate of geographic atrophy (GA) growth in patients with dry age-related macular degeneration (AMD) in a randomized, controlled phase 2b clinical trial. Shortly after announcing these top-line study results in October, Iveric bio announced that it plans to initiate a second clinical trial of the therapy in 2020.

In the randomized, double-masked phase 2b trial, two doses of avacincaptad pegol were associated with statistically significantly greater reductions in mean GA growth compared with sham treatment, with signs of a dose-response relationship across groups, the company announced. The treatment, which was administered as monthly intravitreal injections, was generally well tolerated.

Based on the study design and the robustness of the data, the company said it believes that only one additional pivotal randomized, double-masked, sham-controlled clinical trial would potentially be needed to demonstrate the safety and efficacy of the compound in GA secondary to dry AMD in a manner sufficient to support regulatory approval, assuming that safety and efficacy remain consistent with findings observed to date.

QR-1123 (ProQR), an investigational antisense oligonucleotide, was granted orphan drug status by the FDA in November. QR-1128 has been designed to address the underlying cause of vision loss associated with autosomal-dominant retinitis pigmentosa due to the P23H mutation in the rhodopsin (RHO) gene, according to the company. A phase 1/2 clinical trial of the compound is expected to begin in 2019.

Orphan drug designation provides tax advantages and other benefits to ProQR. The company announced receipt of fast track designation from the FDA in September.

Elmiron (pentosan polysulfate sodium, Janssen Pharmaceutical), a medication used for the treatment of interstitial cystitis, may be associated with retinal damage, according to research presented by Nieraj Jain, MD, during Retina Subspecialty Day at the 2019 AAO Annual Meeting. Interstitial cystitis is a chronic condition that causes bladder inflammation and pelvic pain, most often in women. Pentosan is the only FDA-approved drug to treat the condition. The AAO paper adds weight to evidence from a case series published last year in Ophthalmology.1

Katena Products will purchase Micro Medical Instruments, a medical contract manufacturing service, the company announced in November. Terms of the deal were not disclosed.

The FDA and the European Medicines Agency accepted marketing authorization applications from Chugai Pharmaceutical for satralizumab, an anti–interleukin-6 receptor humanized recycling antibody, for the treatment of adult and adolescent patients with neuromyelitis optica spectrum disorder.

Allergan shareholders approved the company’s proposed acquisition by AbbVie, according to an October press release from Allergan.