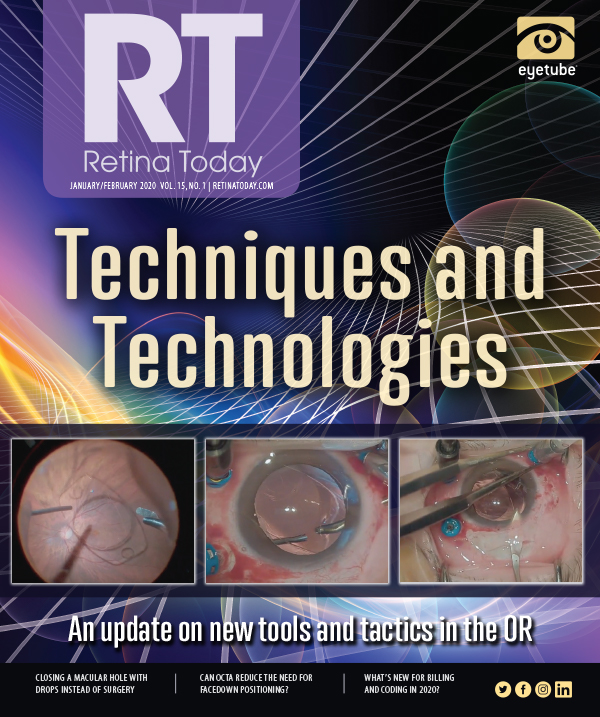 Partial spontaneous resolution was documented over 30 months in this case report.

Chronic lymphocytic leukemia (CLL) is a B-cell malignancy characterized by an accumulation of functionally incompetent monoclonal lymphocytes in the bone marrow, blood, and lymph nodes. This condition is known for its slow rate of cell division and disease progression, and, for this reason, CLL is often followed conservatively.1

A sequela of CLL is hyperviscosity syndrome. This occurs when the blood becomes hyperviscous secondary to an increase in immunoglobulins or the hyperproliferation of blood components.2 Ultimately, hyperviscosity may lead to a series of hematologic, cardiovascular, neurologic, and renal complications, as well as bleeding from mucous membranes.3

• Hyperviscosity syndrome, in which blood becomes hyperviscous, is a common sequela of chronic lymphocytic leukemia.

• In this case study, hyperviscosity led to uveal effusion. The patient was followed for 30 months.

A 67-year-old white woman with a 2-month history of a blind spot in the left eye (OS) was referred to the Ocular Oncology Service at Wills Eye Hospital for evaluation of a possible intraocular mass. She had previously been seen by several retina specialists who had suspected a retinal detachment, posterior scleritis, or tumor.

Ocular history included LASIK in each eye 17 years before her presentation to us and cataract surgery in each eye. Medical history included several previous cancers, including a basal cell carcinoma of the right brow, which was surgically excised; thyroid cancer, treated with thyroidectomy and radioactive iodine; squamous cell carcinoma of the right arm, which was surgically excised; and CLL diagnosed 11 years before presentation and followed with observation. At the time of presentation, the patient reported no metastatic disease and noted long-standing hypertension. Figure 1. This is a case of choroidal effusion in a 67-year-old woman with CLL. At presentation, the left eye demonstrated dilated tortuous retinal veins and a large orange-brown “mass” in the nasal quadrant (A, arrow). Ultrasonography documented choroidal detachment with 4.75 mm elevation (B). OCT showed shallow choroidal undulations (C, arrows).

VA was 20/25 in the right eye (OD) and 20/40 OS on examination. Tortuosity of the retinal veins was observed OD, but there was no sign of intraretinal, subretinal, or choroidal fluid or mass. The macula OD was intact. Similar retinal venous tortuosity was noted OS, but with shallow subretinal fluid and a smooth, brown, peripheral choroidal area that may have been presumed to be a mass in all four quadrants but was most notable nasally (Figure 1A).

At this point, a diagnosis of choroidal effusion was suspected, but, given the patient’s history of malignancy, an MRI was performed. This test confirmed choroidal detachment and the presence of suprachoroidal fluid. The cause of uveal effusion was suspected to be related to hyperviscosity secondary to CLL, as the patient’s white blood cell count (22.9 x 103/µL) was moderately elevated (normal 4.5 x 103 to 10.5 x 103/µL). Given the underlying conditions and intact macula, a period of observation was advised. At 30 months, the eye demonstrated nearly complete spontaneous resolution of effusion. Fundoscopy OD was normal and showed persistent retinal vascular tortuosity. Fundoscopy OS showed dramatic resolution of the effusion with minimal residual choroidal elevation and diffuse retinal pigment epitheliopathy temporally. The choroidal thickness had decreased to 3.3 mm on ultrasonography with trace choroidal undulation on OCT imaging (Figure 2). There was no subretinal fluid and no macular edema. VA was 20/40 OD and had improved to 20/25 OS.

Choroidal effusion represents an accumulation of fluid in the suprachoroidal space. There are various etiologies, most notably including scleropathies (congenital or acquired), hydrodynamic factors (through either ocular hypotony or elevated uveal venous pressure), inflammatory factors, and neoplastic conditions.4

The most important scleropathy is nanophthalmos. Nanophthalmos is defined by an axial length of 20 mm or less and can often be complicated by angle-closure glaucoma and exudative retinal detachment.4 In the patient described in this article, the axial length was 23.2 mm, ruling out nanophthalmos.

Hydrodynamic factors that can lead to ocular hypotony include wound leak, ocular trauma or surgery, ciliary body dysfunction, and rhegmatogenous retinal detachment. Hydrodynamic factors that can lead to elevated uveal venous pressure include Sturge-Weber syndrome and globe compression from orbital mass or hemorrhage. In our patient, we speculate that the effusion was related to a hydrodynamic process of hyperviscosity from her elevated white blood cell count, leading to sludging of vascular flow and raised venous pressure.

The treatment of uveal effusion typically involves corticosteroid (oral, periocular, or intraocular) therapy or surgical sclerotomy (either partial or full-thickness scleral resection). In 2017, Shields et al reviewed 104 eyes with non-nanophthalmic uveal effusion treated with corticosteroids and found that control was achieved in 95% of eyes, and scleral window surgery was required in only 5% of cases.5

Sclerotomy is a technique designed to create a scleral window to allow drainage of suprachoroidal and supraciliary fluid. Mansour et al published a case series in which uveal effusion was treated in eight nanophthalmic eyes of five patients using sclerotomy. In that series, all effusions resolved within an average of 14 days.6 Our strategy is typically to observe mild cases and trial all others on oral or periocular corticosteroids. Patients who do not respond to corticosteroids are then advised to undergo sclerotomy, if necessary.

Leukemia can affect the eye in several ways.7-9 Koshy et al described ophthalmic manifestations of acute and chronic leukemias in 96 patients and found direct leukemic infiltration of the eye in eight patients (8.3%) and indirect involvement of the eye from anemia, thrombocytopenia, hyperviscosity, total body irradiation, and immunosuppression in 42 patients (43.8%).10 The other patients in the series showed no evidence of ocular changes due to leukemia. The authors noted that ocular involvement was more often found in patients with acute and myeloid leukemia and was relatively uncommon in cases of chronic and lymphocytic leukemia.

This article described a patient with uveal effusion as a rare manifestation of hyperviscosity syndrome from CLL. In this patient, partial spontaneous resolution was documented over 30 months.

Support provided in part by the Eye Tumor Research Foundation, Philadelphia, PA (CLS). The funders had no role in the design and conduct of the study, in the collection, analysis and interpretation of the data, and in the preparation, review or approval of the manuscript. Carol L. Shields, MD, has had full access to all the data in the study and takes responsibility for the integrity of the data.