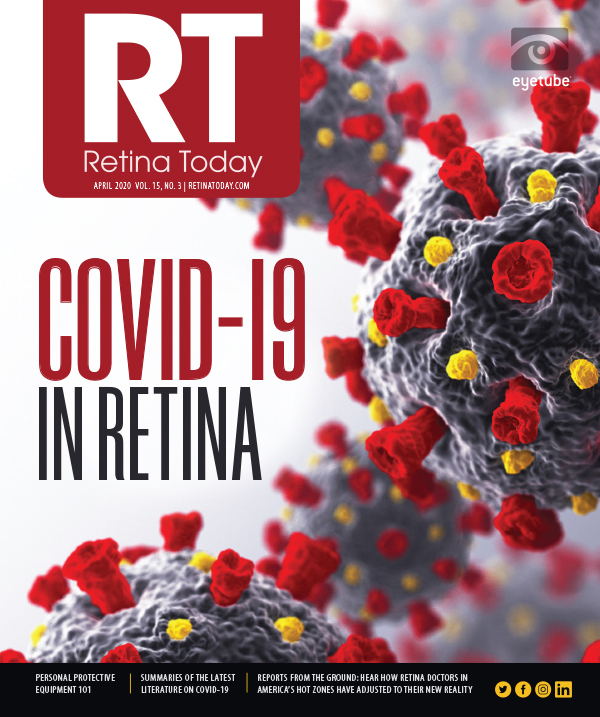 Even as the COVID-19 pandemic rages, news in ophthalmology doesn’t stop. Retina Today collected these news items unrelated to the COVID-19 crisis.

“This study comprises the most diverse patient cohort reported of subretinal macular hemorrhage treated with PPV and subretinal tPA, with no significant difference in outcome found between subgroups,” the study authors stated.

An investigational RNA therapy was safe and showed signs of efficacy in two of eight patients treated in a planned interim analysis of a phase 1/2 clinical trial, the therapy’s developer announced in March. The clinical trial of QR-421a (ProQR Therapeutics) includes patients with Usher syndrome and with nonsyndromic retinitis pigmentosa (nsRP) due to USH2A exon 13 mutations. The Stellar trial is a randomized, single-ascending-dose, multicenter longitudinal 24-month study comparing active versus sham procedures. In the interim analysis of a total of 14 patients in two cohorts (3-month results of cohort 2 and 9-month results of cohort 1), one treated patient in each cohort “demonstrated benefit across multiple concordant outcome measures,” the company said in a press release.

In the same release, the company noted that it expects delays in this and other clinical trials due to disruptions caused by the COVID-19 pandemic. The company said it plans to resume dosing patients as soon as it is practical to do so.

Dr. Dugel was previously managing partner at Retinal Consultants of Arizona and the Retinal Research Institute; a clinical professor at the USC Eye Institute, Keck School of Medicine, University of Southern California; and a founding member of Spectra Eye Institute in Sun City, Arizona. He is a member of Retina Today’s Editorial Advisory Board.

Clearside Biomedical announced that George Lasezkay, PharmD, JD, was appointed president and CEO and will continue to serve on the company’s board of directors, effective March 1. He had been the company’s interim CEO since April 2019. Clearside is developing triamcinolone acetonide for suprachoroidal injectable suspension (Xipere), which was licensed by Bausch + Lomb in October of last year. The company expects to resubmit its new drug application for the drug to the US FDA in the first quarter of 2020 and believes the FDA will review the submission within 6 months of receipt.

Planned enrollment has been completed in all adult dose groups in phase 1/2 clinical trials of gene therapies for patients with achromatopsia due to mutation in the ACHM CNGB3 or ACHM CNGA3 genes, trial sponsor Applied Genetic Technologies Corporation (AGTC) announced in March. The company reported interim 6-month data from the dose-escalation cohorts of its ongoing ACHM phase 1/2 clinical trials in January. Results in both studies demonstrated encouraging signs of biologic activity, the company said in a press release. AGTC plans to report interim data from all adult dose groups in the second half of 2020 and to use the data to inform decision-making regarding moving to phase 3 trials.

The cholesterol-lowering drug alirocumab (Praluent, Regeneron) may cause scleritis with uveal effusion, according to a case report in Annals of Internal Medicine.1

“The case we report here is unusual, because alirocumab-induced scleritis seems to be rare but also because alirocumab does not target a molecule in the immune pathway,” the report’s authors said. “We believe that our patient’s complex autoimmune history, which includes thyroiditis and antinuclear antibodies, may have predisposed her to this reaction. We also believe that additional cases may be expected with the general increase in monoclonal antibody therapy.”

Prism Vision Group in March announced an agreement to add a new partner, the Retina Group of Washington, a provider of retinal and macular care in Washington, DC; Virginia; and Maryland. Terms of the deal were not disclosed.

The FDA in March approved Allergan’s new drug application for its bimatoprost implant 10 mcg (Durysta). The implant is the first intracameral biodegradable sustained-release implant indicated to reduce IOP in patients with open-angle glaucoma or ocular hypertension, according to Allergan. The FDA approval was based on results from the two 20-month (including 8-month extended follow-up) phase 3 ARTEMIS studies, in which the implant reduced IOP by approximately 30% from baseline over the 12-week primary efficacy period.