Ultra-Widefield Imaging: Advancing the Understanding and Management of Diabetic Retinopathy

The rising incidence of diabetes in the US population and the cresting wave of Americans entering old age will ensure that diabetic retinopathy (DR) remains one of the principal threats to the sight of adult patients and a significant management challenge for the clinical community. As retina specialists adapt to these demands, the use of multimodality ultra-widefield (UWF) retinal imaging (Optos) is making important contributions to the evolving understanding of the DR disease process, ongoing efforts to increase early diagnosis and improve treatment outcomes, and the persistent search for enhanced efficiencies in delivering care.

The potential of UWF imaging to improve the diagnosis and management of DR has been evident for some time.1 Several studies have documented strong correlations between conventional ETDRS seven standard field color fundus photographs and UWF images in the assessment of DR, also noting that optomap (Optos) images facilitate visualization of a much larger area of the retinal periphery and are acquired more rapidly, often without dilation.2-4 In addition, the 200° span of UWF color imaging and UWF fluorescein angiography (FA) has been shown to reveal more pathology than standard fields, including peripheral microaneurysms, neovascularization, vascular nonperfusion, and vascular leakage, providing early signs that might otherwise be missed and that may suggest a greater degree of disease severity (Figures 1 and 2).5-7 The combination of UWF and optical coherence tomography (OCT) imaging has shown promise in improving the assessment of DR.8 Exploration of the prognostic significance of findings on UWF imaging is under way, and a number of important results have already been published. A significant correlation between peripheral retinal ischemia, identified with UWF fluorescein angiography, and diabetic macular edema (DME) was demonstrated in treatment-naïve patients.9 Peripheral neovascularization, nonperfusion, and late peripheral vascular leakage were detected by UWF at higher rates among patients with recurrent versus not recurrent postvitrectomy diabetic vitreous hemorrhage, and these findings could be suggestive of the need for additional treatment to prevent this complication.10 Observed connections between peripheral nonperfusion, severity of DR, and recalcitrant macular edema provided the rationale for a proposed ischemic index based on UWF imaging and supported the concept that mediators of ischemia and disease progression may be produced in areas of untreated peripheral nonperfusion.11 Recently, peripheral lesions identified via UWF imaging were associated with a greatly increased risk of disease progression over a 4-year period, regardless of baseline severity of DR or diabetic control, suggesting that examination of the peripheral retina is essential for accurately assessing risk of DR progression (Figures 3 and 4).12

A rapidly growing body of clinical evidence is changing the way we think about DR, including the conventional severity scale. For example, once patients reach the established criteria of the “4-2-1” rule for severe nonproliferative DR, the disease is already likely to have progressed beyond where it might have if treatment had been initiated based on findings from the periphery. Conversely, even if we identify only a few microaneurysms in a standard assessment, a UWF FA might reveal extensive nonperfusion in the periphery. Knowing that peripheral nonperfusion is highly correlated with disease progression, we would likely want to see a patient with these findings every 3 months. 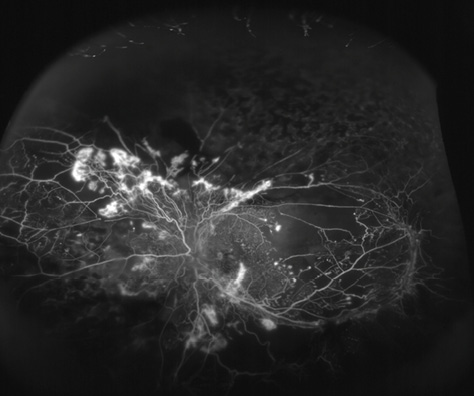 More fundamentally, our hypotheses about the etiology of DR and DME—and the treatment approaches based on these understandings—are evolving as a result of UWF imaging. It is increasingly clear that DME is primarily a disorder of the retinal periphery that only secondarily affects the macula, and that it has two distinct presentations, acute and chronic. In patients with diabetes, the retinal capillaries shut down due to the loss of pericytes in response to hyperglycemia, so retinal tissue is not oxygenated and given nutrition. In the acute phase, VEGF is released, and its mechanistic role can be confirmed by the dramatic response to VEGF inhibitors that has been documented in clinical trials. In our clinic, we have found that down-regulating VEGF by treating the ischemic retina with a VEGF inhibitor, followed by targeted PRP, can be a very effective way to resolve DME. Because PRP can up-regulate VEGF, we administer two additional VEGF inhibitor injections a month apart. If DME remains unresolved, a new UWF angiogram can help determine if all areas of nonperfusion have been adequately treated and if additional PRP is warranted (Figures 5 and 6). 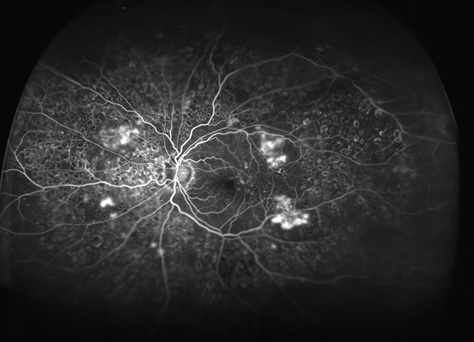 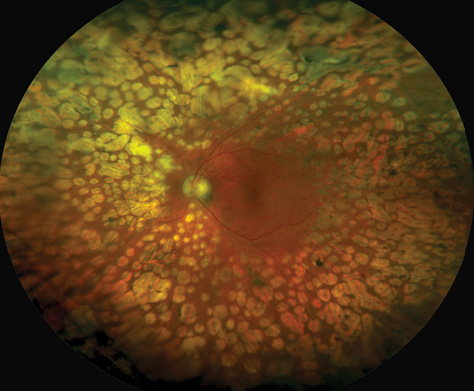 However, in chronic DME, which is associated with inflammation and sometimes irreversible tissue damage leading to the up-regulation of cytokines such as interleukin-6, interleukin-8, and MCP1, therapy should be directed toward inflammation with the use of steroids in addition to VEGF inhibition and PRP to the ischemic retina. Early treatment is critical: The RISE and RIDE studies demonstrated that vision in eyes with chronic edema did not improve as much as in eyes treated early, within the first 2 years, likely because of irreversible damage to retinal structures.18

A recently completed prospective, proof-of-concept pilot study in seven patients with DME confirmed observations from an earlier case series that combining VEGF inhibition with targeted PRP to areas of poor perfusion as determined by UWF FA appears to improve or resolve diffuse DME, to improve or stabilize vision, and to substantially reduce the need for and frequency of intravitreal injections.19

Integrating UWF imaging into the management of patients with diabetes has practical benefits in addition to clinical advantages. The ability to perform single-capture, nonmydriatic UWF imaging allows the clinician to make more efficient use of his or her time by facilitating quick evaluation of the status of the retina in a new patient. It is no longer necessary to search laboriously with an indirect ophthalmoscope and perform a contact lens examination with drawings—the optomap displays exactly what is going on and gets the physician up to speed within seconds, whether the image was captured in the office or at a remote location. This allows more face-to-face discussion time with the patient, improving patient satisfaction. The optomap is also useful for educating the patient about his or her condition and its likely progression, thereby supporting better compliance, which in turn may help patients preserve visual acuity.

As UWF becomes integrated in a variety of screening programs, the ease with which optomap images can be captured, stored, annotated, and shared will help optimize practice efficiency and resource use, particularly in comanaged settings. For example, implementation of nonmydriatic UWF imaging in a DR ocular telehealth program reduced the number of ungradable images to less than 3% and shortened image evaluation time by 28%, while allowing clinicians to identify DR 17% more frequently.20

Given the accumulating weight of evidence supporting a central role for UWF retinal imaging in managing DR, and the unfortunate fact that some patients with diabetes are still going blind because they are treated too late, it is not unreasonable to suggest that our standard of care must evolve to the point where every patient with diabetes undergoes periodic optomap imaging. n

The Role of Corticosteroid Implants in DME

New Paradigms in the Management and Treatment of Diabetic Macular Edema