Bariatric Surgery Does Not Prevent Progression of Diabetic Retinopathy

A study found no advantage of surgery over intensive medical therapy in diabetic retinopathy development at 2 years.

The diabetic population is growing in epidemic proportions. In 2012, 29 million people in the United States (9.3% of the population) had diabetes, up from 26 million (8.3%) only 2 years before; the percentage of the population with diabetes grew to 12.9% in 2014. The prevalence in older Americans is even higher, with almost 26% of those 65 years and older affected.1 The most common approach to diabetes treatment is pharmacotherapy, but many diabetic patients do not achieve adequate glycemic control with current drug regimens. Recently, studies have shown that glycemic control is improved in patients with type 2 diabetes after bariatric surgery, and that diabetes can be improved and even rapidly put into a state of remission after gastric bypass surgery.2,3 Short-term randomized controlled trials, including the 1-year data from the STAMPEDE (Surgical Treatment and Medications Potentially Eradicate Diabetes Efficiently; NCT00432809) trial,4 demonstrated remission of type 2 diabetes following bariatric surgery.

Less clear, however, is whether the rapid reduction of glycated hemoglobin (A1c) seen after bariatric surgery leads to improvements in the microvascular complications of diabetes, including diabetic retinopathy (DR). Until recently, no long-term trial had investigated ophthalmic outcomes in patients after bariatric surgery. This has been a concern because some studies have suggested that rapid improvement in glycemic control is associated with worsening of DR in cases of intense insulin control, pregnancy, and GLP-1 agonist treatments.5

REVIEW OF THE LITERATURE

The STAMPEDE trial was a randomized, single-center, nonmasked trial evaluating the efficacy of intensive medical therapy (IMT) alone in comparison with IMT plus Roux-en-Y gastric bypass or sleeve gastrectomy in 150 patients with uncontrolled type 2 diabetes mellitus. The goal of IMT was for patients to achieve an A1c level of 6.0% or less through adjustment of diabetes medications including insulin sensitizers, GLP-1 agonists, sulfonylureas, and insulin injections. In addition, diabetes educators counseled patients during the course of the study.

Patients included in the study had A1c levels of 7.0% or greater, a body mass index (BMI) of 27 to 43 kg/m2, and were 20 to 60 years of age.4 Patients were randomly assigned to 1 of the 3 interventions and followed for a period of 2 years. All patients were evaluated at baseline and 2 years by ophthalmologists, who performed visual acuity and dilated retinal examinations for grading of DR.

The primary end point of the study was the proportion of patients with a glycated hemoglobin level of 6.0% or less at 12 months after randomization. Secondary endpoints included changes in fasting plasma glucose; lipid levels, blood pressure, or BMI; carotid intimal medial thickness; and medications. Safety, adverse events, and quality of life were assessed. Ophthalmic outcomes assessed were change in visual acuity and change in retinopathy score from baseline to year 2.

There was no statistically significant difference in A1c levels between treatment groups at baseline. The average visual acuity in the entire cohort was 20/20 at baseline. DR severity score among the whole cohort was as follows: 82.0% no manifestation of retinopathy, 16.0% mild or moderate nonproliferative DR (NPDR), 0.7% severe NPDR, and 1.4% proliferative DR (PDR). There were no significant differences in the presence of DR across treatment groups.

Table 1 summarizes the proportion of patients achieving the primary endpoint of an A1c level of 6.0% over 3 years of follow up in STAMPEDE. Glycemic control improved in all 3 groups at year 2, with mean declines of 1.1% in the IMT group, 2.8% in IMT plus Roux-en-Y gastric bypass, and 2.7% in the IMT sleeve gastrectomy group. Differences were statistically significant between the surgery groups and the IMT group (P < .001) but not between the 2 surgery groups (P = .734) at year 2.

At year 2, in the full cohort, 80.2% of patients manifested no DR: 82.9%, 79.5%, and 78.7% in the IMT, IMT plus Roux-en-Y gastric bypass, and the IMT sleeve gastrectomy cohorts, respectively. Mild or moderate NPDR was seen in 16.7% in the total cohort and was not statistically different between the groups. Severe NPDR was seen in the full cohort in 1.6% and 1.6% had PDR, again without significant differences noted between cohorts (Table 2). 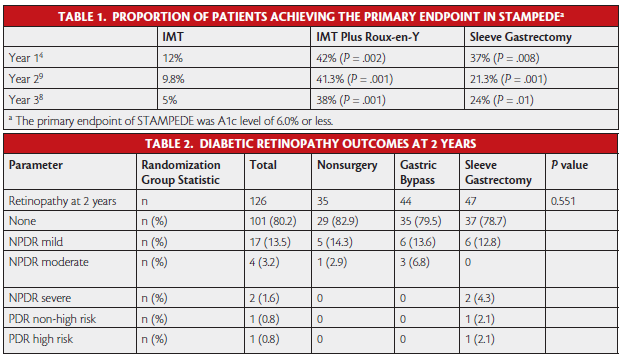 Mean visual acuity was 20/20 for all groups at year 2, as it was at baseline, so there were no statistically significant changes in visual acuity between groups or from baseline. No serious ocular adverse events were noted in any treatment group at 2 years.

There was excellent patient follow-up in STAMPEDE at year 2 (91% retention), and a final 5-year analysis with ophthalmic outcomes is planned.

In the STAMPEDE trial, bariatric surgery was more effective than IMT in achieving glycemic control (A1c ≤ 6.0%). Despite the difference in glycemic control, bariatric surgery did not appear to accelerate or improve retinopathy outcomes at 2 years in comparison with IMT. In addition, there was no difference in visual acuity outcomes among the 3 treatment arms.

Previous studies have observed that intensive glycemic treatment was associated with transient worsening of DR, and some authors have reported that rapid changes in glycemic control may result in worsening of diabetic microvascular complications such as DR. In the Diabetes Control and Complications Trial, patients receiving intensive treatment demonstrated early worsening approximately twice as frequently as patients receiving conventional therapy; however, half of these patients recovered from the early worsening by 12 months.10

Bariatric surgery can rapidly improve glycemic control, and therefore progression of DR may occur. The authors of STAMPEDE advise continued adherence to recommendations from the American Diabetes Association for in patients with DR despite remission with these surgical techniques.11 n

Rishi P. Singh, MD, is a staff physician at Cole Eye Institute, Cleveland Clinic, medical director of the clinical systems office in Cleveland Clinic, and an assistant professor of ophthalmology at Case Western Reserve University, all in Cleveland, Ohio. Dr. Singh may be reached at drrishisingh@gmail.com.

Coping with an Inadequate EHR in a Vitreoretinal Practice

Making the Jump to MicroPulse Laser Therapy for Treating the Macula

Retina in 3-D: A Look Into the Future of Diagnostics, Drugs, and Devices

Supported by advertising from Regeneron Pharmaceuticals

Beyond the Clinical Trials: The Role of Imaging in Patients with DME

Supported by advertising from Allergan Inc., and Heidelberg Engineering