A review of surgical techniques to enhance patients' visual outcomes after vitrectomy.

The execution of surgical techniques are highly dependent on the surgeons personal preferences, and many times surgeons perform the same surgery in different manners. However, there are many ways to achieve success in surgery, and one should perform techniques that provide the best results for him or her.

This article reviews certain surgical techniques that I have found helpful in vitreoretinal surgery. Some surgeons may view some of these steps as unnecessary to perform during vitrectomy. However, for surgeons who do decide to perform the steps discussed here, I also review some pearls and tricks that should help improve success with these maneuvers. Video links are provided so readers can see these techniques in action.

Advances in technology in recent years allow surgeons to perform scleral-depressed vitrectomy in both phakic and pseudophakic patients (Video 1). Scleral-depressed vitrectomy allows peripheral vitreous shaving, which results in a more complete vitrectomy. When combined with peripheral laser treatment (see below), these techniques may alleviate the need for scleral buckling during vitrectomy surgery in many patients with primary rhegmatogenous retinal detachment. 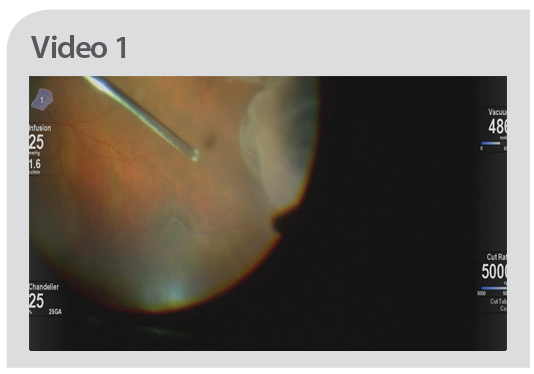 Here are a few pearls and tricks to reduce the risks of these procedure, especially in phakic patients:

Use of 360° scleral-depressed peripheral laser treatment may reduce the likelihood of patients developing peripheral retinal detachment from newly formed breaks during the postoperative period (Video 2). Ideally, laser should be applied from the posterior edge of the ora to the posterior edge of the anterior vitreous base (which is typically the location of the most posterior break). Light laser burns with short duration (200 ms) are applied in a scattered, nonconfluent fashion for 360°, avoiding heavy laser burns. If possible, the horizontal meridians should be avoided to prevent lasering the ciliary nerves, thereby decreasing the likelihood of postoperative pupillary dilation. In phakic patients, the use of a curved or directional lighted laser probe may be necessary to perform this procedure. Tamponade with C3F8 gas and face-down positioning for around 1 week may help decrease the rate of postoperative redetachment. 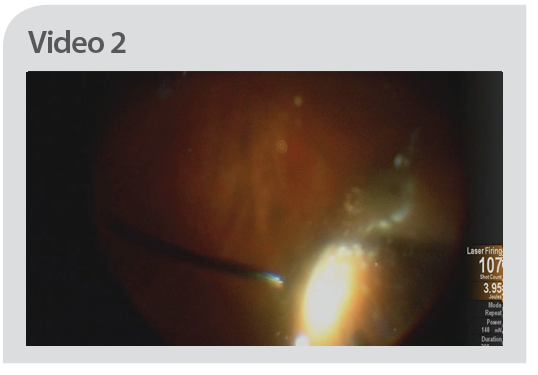 The following pearls may reduce the likelihood of phototoxicity while using a chandelier light source:

The use of trocar systems in vitrectomy surgery has improved outcomes by minimizing trauma to the conjunctiva during surgery and decreased the incidence of iatrogenic peripheral breaks caused by instruments entering and exiting the eye (Video 3). The introduction of valved trocar systems further improved the surgical experience by creating a closed system for vitrectomy surgery, alleviating the need for plugs and allowing surgeons to decrease the flow of fluid during vitrectomy. 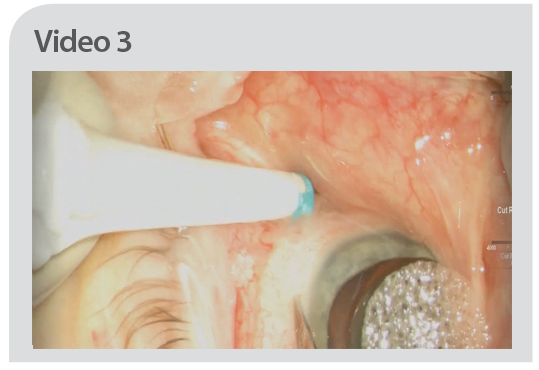 During the 20-gauge vitrectomy era, surgeons did not need to be concerned (as much) about perfusion of the optic nerve and retina during surgery because the system was not watertight, and fluid leaked around the sclerotomies. The valved trocar system minimizes the leakage of fluid during vitrectomy, and, therefore, it is paramount to monitor the optic nerve and retinal perfusion during the surgery and adjust the IOP and/or patient’s blood pressure accordingly.

Kourous A. Rezaei, MD, is affilated with Illinois Retina Associates, Rush University Medical Center, and ChannelR LLC. He invites you to visit www.ChannelR.net, an online video discussion atlas for both medical and surgical retina. Dr. Rezaei may be reached at karezaei@yahoo.com.

Coping with an Inadequate EHR in a Vitreoretinal Practice

The Preclinical Process: Drugs Designed for the Back of the Eye

Retina in 3-D: A Look Into the Future of Diagnostics, Drugs, and Devices

Supported by advertising from Regeneron Pharmaceuticals

Making the Jump to MicroPulse Laser Therapy for Treating the Macula

Beyond the Clinical Trials: The Role of Imaging in Patients with DME

Supported by advertising from Allergan Inc., and Heidelberg Engineering