Gene Therapy: The Next Frontier for Treatment of Acquired and Inherited Ocular Disorders

These cutting-edge approaches may soon successfully treat some forms of retinal diseases previously thought to be untreatable.

• Gene therapy can be delivered to the vitreous and retina by intravitreal, subretinal, or suprachoroidal injection.
• The viral vectors most commonly used for gene therapy are adeno-associated viruses.
• Clinical investigators are studying gene therapy for treatment of various conditions, including retinitis pigmentosa, choroideremia, and age-related macular degeneration.

We are at the forefront of gene therapy for the treatment of a wide range of ocular disorders, some of which were previously deemed incurable. Gene therapy involves intracellular delivery of genetic material to replace a dysfunctional gene product (eg, RPE65) or to deliver a therapeutic, nonnative molecule (eg, anti-VEGF therapy) directly to targeted cells. Modern science offers two approaches to retinal gene therapy: vectors and surgical methods to deliver engineered genetic material to targeted cells. The eye, being a small, enclosed compartment, is an ideal site for gene therapy. When a viral vector is injected into the eye, there is little danger of immune reaction and little risk of systemic spread.1

Animal models of a wide range of diseases that are a target for ocular gene therapy are already available, and, as advances are made, outcome measures and safety data in humans are becoming more readily available. There are currently 16 registered clinical trials featuring intraocular gene delivery for a wide assortment of diseases.2 This article discusses the history, principles, and limitations of ocular gene therapy and outlines current developments.

Human gene therapy trials have been carried out at more than a dozen different sites and have involved more than 300 eyes.

2015: No gene therapy approval in the United States, but phase 3 study results of a therapy using adeno-associated virus (AAV) type 2 to treat congenital blindness will be reviewed by the US Food and Drug Administration this year

THE FOUNDATION OF GENE THERAPY

AAVs are the viral vectors most commonly used for gene therapy; they are simple (single-stranded DNA), nonpathogenic, and small in size (25 nm). Recombinant AAVs consisting of different serotypes and capsid proteins can be manufactured and designed to target cells in specific retinal layers, where they are capable of long-term expression of genes and proteins.1 Due to their specificity, duration, and safety, AAVs are ideal for treating inherited and acquired retinal diseases. 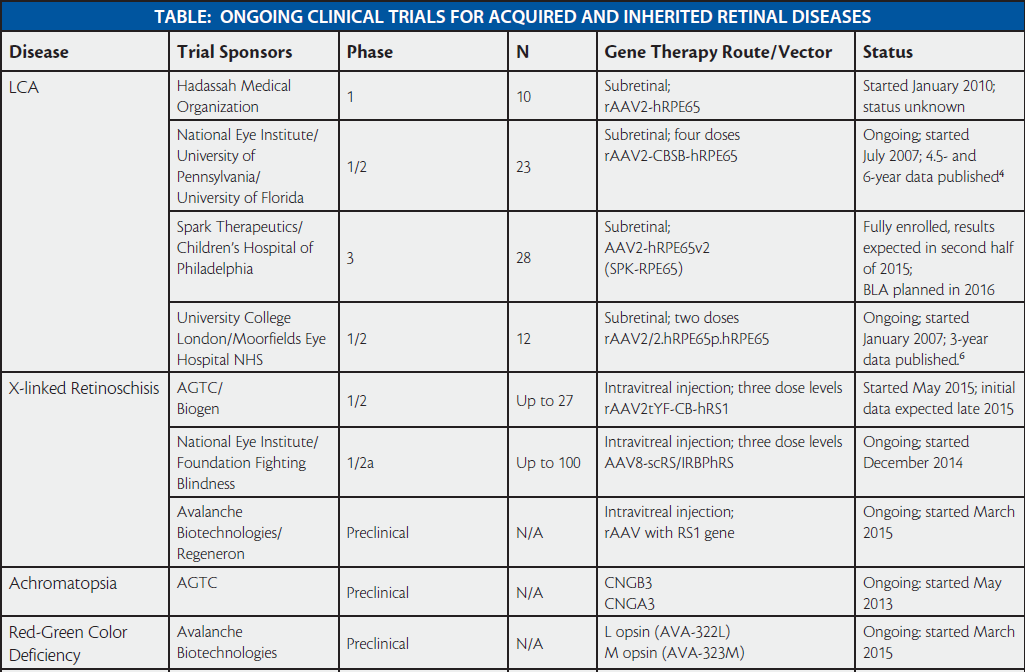 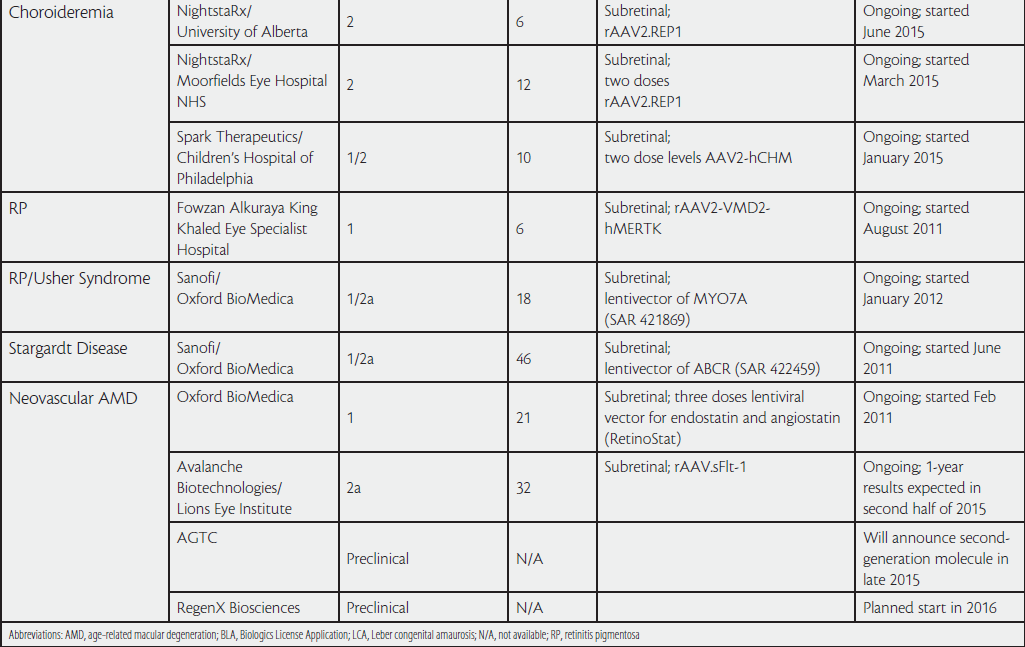 Several routes (intravitreal, subretinal, and suprachoroidal injection) can be used for ocular gene delivery to the vitreous and retina, each having advantages and disadvantages. All three methods incur the risk of retinal detachment, endophthalmitis, and increased intraocular pressure. Treatment selection for a particular disease depends on the desired cellular and therapeutic target.2

Intravitreal delivery may be the simplest method, but it is far less efficient than subretinal delivery due to the impedance of the internal limiting membrane, with its thick basement membrane rich in glycosaminoglycans. Intravitreal therapy thus has its greatest impact on retinal ganglion cells in the fovea but does not tend to reach cells in the outer layers of the retina.

Subretinal therapy, which involves injection into the subretinal space, is more invasive and may be difficult in patients whose retinal architecture is compromised. However, it offers highly efficient and localized transduction of the outer retinal cells, including retinal pigment epithelial cells and photoreceptors. Another consideration in favor of subretinal therapy is that the body contains neutralizing antibodies against naturally occurring AAVs. These antibodies are present in the vitreous. Subretinal therapy may avoid this neutralizing effect and allow sequential gene therapy administration to both eyes while minimizing the risk of an inflammatory reaction to the gene therapy vector.

Suprachoroidal delivery, which involves injection below the sclera and above the choroid, is being explored. Although this technique may cause less disruption of optical pathways, the injection may be cleared rapidly by the choroidal circulation and therefore may have diminished effect. The therapeutic cellular target may also not be transduced via this method.

Gene therapy has potential utility in the treatment of multiple retinal degenerative syndromes. It has been most studied in Leber congenital amaurosis (LCA), an autosomal recessive disease resulting from mutations in at least 15 genes. Patients with LCA experience marked vision impairment starting between birth and 6 months of age. In developing genetic targets, particular interest has been given to mutations in the RPE65 gene, which encodes for all-trans-retinyl-ester hydrolase, an enzyme critical in signaling to the visual cortex3 and regeneration of visual pigment after exposure to light.4

LCA will likely be the first ophthalmic disease for which gene therapy will be approved. Long-term follow-up shows that some visual improvements have lasted 3 to 6 years and that use of gene therapy has met primary safety endpoints. A recent phase 1/2 trial showed improvement in retinal sensitivity peaking from 6 to 12 months, then declining over 3 years in response to AAV2-mediated RPE65 gene supplementation.4 Ongoing studies have shown fellow-eye therapy to be safe and effective, and this is being evaluated in phase 3 trials. Bennett et al found that readministration of gene therapy to the fellow eye led to improved vision and improvement in nystagmus in two-thirds of patients.5 Jacobson et al found that vision improved from year 1 to 3, then declined back to baseline by year 6.6 Four major trials in different phases are examining gene therapy for LCA.

Gene therapy is an exciting new area of drug development for inherited and acquired diseases, and its future is promising, with ongoing trials studying its use in retinitis pigmentosa, Stargardt disease, choroideremia, x-linked retinoschisis, achromatopsia, red-green color vision deficiency, and neovascular age-related macular degeneration.2 Variations in gene therapy vectors (modifications of viral vectors, promoters, genes, and manufacturing) are being investigated, and many ophthalmic clinical trials are being conducted (Table). Gene therapy has the potential to transform the landscape of how we approach retinal diseases previously thought to be untreatable. n

Szilárd Kiss, MD, is the director of clinical research and an associate professor of ophthalmology at Weill Cornell Medical College in New York, N.Y., and an associate attending physician at the New York Presbyterian Hospital. He is a member of the Retina Today Editorial Board. Dr. Kiss may be reached at szk7001@med.cornell.edu.

A Time to Harvest New Ideas

Supported through an unrestricted educational grant by Regeneron Pharmaceuticals.

DME Resource Center: Beyond the Clinical Trials: Dexamethasone Implant vs. Bevacizumab Injection for Treatment of DME

Diabetic Macular Edema: The Role of MicroPulse Laser Therapy in the Anti-VEGF Era