Retinal degenerative diseases typically have a genetic cause, in that mutated genes either lead to the production of an abnormal protein or disable production of a protein completely. Gene therapy involves the introduction of a functional copy of the gene into a patient’s cells to correct the underlying genetic defect causing the disease. Thus, gene therapy can provide transformative disease-modifying effects. This article addresses the potential of gene therapy for the treatment of two inherited diseases: X-linked retinoschisis (XLRS) and X-linked retinitis pigmentosa (XLRP).

• Gene therapy involves use of viral vectors that have been optimized to deliver genes into cells.

• In gene therapy for X-linked retinoschisis, injection of an adeno-associated virus vector delivers copies of the normal human RS1 gene directly into cells.

• Roughly 10% to 20% of RP cases are X-linked, and more than 70% of X-linked cases are caused by mutations in the RP GTPase regulator gene.

Gene therapy involves the use of engineered viruses, also called viral vectors. These viral vectors have been optimized to deliver genes into cells, with pathogenic elements removed and their ability to replicate severely impaired. Vectors based on adeno-associated virus (AAV) are especially well suited for treating retinal diseases because AAV is a small, simple virus that elicits only a weak immune response and does not cause human disease. AAV vectors have no viral genes remaining, and the possibility of any viral genes causing an adverse event is therefore eliminated.1

More than 200 genes have been identified in which mutations can result in loss of visual acuity or blindness. Research on many of these diseases in animal models has shown that a single therapeutic administration of gene therapy has the potential to provide long-term clinical benefit.2

Several clinical-stage biotechnology companies, such as Spark Therapeutics, Oxford Biomedica, Genzyme, NightstaRx, and AGTC, specialize in the development of gene therapies for rare inherited retinal diseases that currently have no treatment.

AGTC’s product pipeline comprises six ophthalmology programs across five targets, two of which are relevant to this article. In August 2015, AGTC and Biogen announced a strategic collaboration that includes clinical development programs of gene-based therapies for XLRS and XLRP.

XLRS is an orphan inherited disease of the retina caused by mutations in the RS1 gene, which encodes the retinoschisin protein.3 Retinoschisin is expressed and secreted from photoreceptors and bipolar cells, and it binds strongly and specifically to the surfaces of many cells in the retina.4-6 Mutated forms of retinoschisin are unable to bind properly, which leads to splitting (schisis) of the layers of the retina (Figure 1).

Individuals with XLRS typically develop symptoms by school age, with visual acuity decreasing to between 20/60 and 20/120.7-10 Almost all patients have schisis of the layers of the macula, which is often diagnosed based on a characteristic spoke-wheel pattern appearance of the macula on fundus ophthalmoscopy.7-12 XLRS patients also have an abnormality on full-field electroretinography (ERG) evaluation, with a reduction in the B-wave under scotopic conditions that produces a negative waveform (B- to A-wave ratio ≤1.0) in about half of patients.10,13

An estimated 35 000 people in the United States and the European Union have XLRS, and there are no approved treatments.14 Some research suggests that topical carbonic anhydrase inhibitors can reduce the degree of schisis in patients with XLRS, but these observations are largely based on anecdotal reports or retrospective case studies.15-17

Gene therapy is emerging as a viable treatment option for patients with XLRS. The proposed mechanism of action of XLRS gene therapy begins with AGTC’s product candidate: an AAV vector that contains the normal human RS1 gene. After intravitreal injection into a patient’s eye, AAV vectors enter the retinal cells and deliver copies of the normal RS1 gene directly into the nucleus. Genes that are delivered by AAV vectors have been shown to remain in the nucleus as episomes (double-stranded circular DNA segments) that do not integrate into the patient’s existing DNA. With successful delivery, the normal RS1 gene supports the sustained production of functional retinoschisin protein and corrects the underlying cause of XLRS. As the levels of normal protein rise, retinoschisin binds strongly and specifically to the surfaces of cells in the retina, which is thought to facilitate restoration of integrity and organization within the retinal cell layers.

The results of preclinical studies have supported the advancement of gene therapy-based XLRS product candidates into clinical development, and two nonrandomized, open-label, dose-escalation phase 1/2 trials are being conducted to evaluate the safety and tolerability of an intravitreal injection of AAV vector expressing human RS1 in patients with XLRS.18-23 The National Eye Institute is conducting one of the trials (NCT02317887), and AGTC is conducting the other (NCT02416622).18,23

The initial dose-escalation stage of AGTC’s phase 1/2 XLRS gene therapy trial is designed to evaluate three dose levels in consecutive patient cohorts. The study began with a cohort of patients who received treatment at the lowest dose level and will proceed to a subsequent cohort of new patients who will receive treatment at the middle dose level, but only after a review of safety data from the low-dose cohort by a data and safety monitoring committee.18 The same procedure will be followed before progression to the high-dose cohort. This linear progression between dose levels, with the incorporation of a formal safety data review at each transition, is a critical design feature that is included to protect the safety of patients during all steps of the trial.

Retinitis pigmentosa (RP) is an inherited retinal dystrophy associated with night blindness, progressive restriction of the visual fields, and eventual legal blindness.24,25 An estimated 10% to 20% of cases are X-linked, and more than 70% of X-linked cases are caused by mutations in the RP GTPase regulator (RPGR) gene.26-29 RPGR encodes a protein located in the cilium that connects the inner and outer segments of photoreceptors, which is required to maintain directional protein transport between the inner and outer segments. Mutations in RPGR result in abnormal transport and can lead to photoreceptor cell death.30

When RPGR was first identified as the gene that is mutated in a large proportion of XLRP cases, it was characterized as having 19 exons with full-length messenger RNA being expressed in a variety of cell types.31 Since this initial characterization, studies have shown that multiple transcript variants are generated from the RPGR gene, and photoreceptors express an RPGR mRNA isoform that contains a unique 3’ region called ORF15 (Figure 2).29,32,33 While estimates vary, ORF15 has been reported to be the site of up to 60% of disease-causing mutations.30 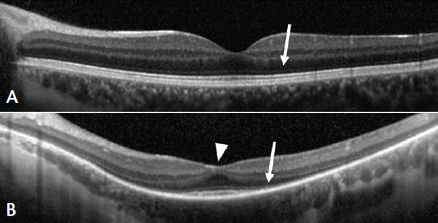 More than 20 000 people in the United States and the European Union are estimated to have XLRP (Figure 3) and could potentially benefit from a gene therapy-based product.34 Although there are no approved treatments for any form of RP, studies have shown that certain nutritional supplements may slow disease progression. Some, including high-dose vitamin A palmitate for RP, remain controversial and associated with risk.35 Others, such as docosahexaenoic acid for XLRP, are under active investigation.36,37 For patients with RP who have little to no remaining vision, artificial vision devices such as the Argus II Retinal Prosthesis System (Second Sight Medical Products) have been shown to restore mobility vision.38 For patients in the vision-threatening stages of RP, however, gene therapy is an emerging potential option.

Preclinical studies have demonstrated the therapeutic effect of AAV vectors expressing XLRP ORF15 in proof-of-concept studies in canine models of XLRP, with no toxicity seen in toxicology, and biodistribution studies.39,40 Pending the results of additional preclinical studies, AGTC expects to initiate a phase 1/2 clinical trial to evaluate a subretinal injection of AAV vector expressing human RPGR ORF15 in patients with XLRP caused by mutations in this region.

One insight gained from AGTC’s lead XLRS gene therapy clinical trial is that natural history data can provide critical guidance when developing clinical study design, especially when rare inherited diseases of the retina that do not have well-established study endpoints are being evaluated. AGTC conducted an XLRS natural history study (NCT02331173) that showed that performing Goldmann visual field perimetry testing with a size 5 target was not useful because most individuals showed a ceiling effect.41 Investigators found that using a smaller size 3 target was more effective in revealing defects.42 The results also showed the degree to which XLRS disease expression varies among patients and that multiple assessments, including ERG, will be necessary to comprehensively evaluate the potential therapeutic effect of the gene therapy product candidate.42

13. Renner AB, Kellner U, Fiebig B, et al. ERG variability in X-linked congenital retinoschisis patients with mutations in the RS1 gene and the diagnostic importance of fundus autofluorescence and OCT. Doc Ophthalmol. 2008;116(2):97-109.

David G. Birch, PhD
• director of the Rose-Silverthorne Retinal Degeneration Laboratory, scientific director at the Retina Foundation of the Southwest, adjunct professor of ophthalmology at the University of Texas Southwestern Medical Center in Dallas, Texas
• financial disclosure: member of the ophthalmology scientific advisory board at AGTC
• dbirch@retinafoundation.org

the Editors of Retina Today

The Long-Term Management of Uveitis

Sponsored by advertising from Allergan

Supported by an unrestricted educational grant from Allergan.