Medical coding is the tool that one uses to facilitate payment, track health data, and measure performance and efficiency. Although much of it is straightforward, selecting the appropriate corresponding codes and modifiers for some retina procedures can be tricky. This issue’s column offers information that will hopefully prove helpful in making the coding of complicated surgical cases less daunting in the future.

The inquiry below came to me from a biller/coder in Florida regarding an issue coding a complicated surgical case. Errors made when submitting the claim that contributed to denials of the claim are in bold. My response to the inquiry follows.

When the doctor does pars plana vitrectomy (PPV), removal of posterior chamber intraocular lens (PCIOL), and suture of IOL for dislocated PCIOL, we have always coded 67036 and 66985-51. We have never had any problems getting paid for both by any insurance company including Medicare. I billed this combination of codes for two patients who had this type of surgery on January 21, 2016. In both cases, Medicare denied the PPV and paid only the IOL suture

I called Medicare today to find out why. According to the rep I spoke with, it turns out it is not a bundling issue, but a medically necessary issue based on the diagnosis T85.29XD (other mechanical complication of IOL, subsequent encounter). She referred me to the National Coverage Determination (NCD) for PPV, which states that, “Vitrectomy may be considered reasonable and necessary for the following conditions: vitreous loss incident to cataract surgery, vitreous opacities due to vitreous hemorrhage or other causes, retinal detachments secondary to vitreous strands, proliferative retinopathy, and vitreous retraction.”

How do you advise billing for “PPV, removal of PCIOL, and suture of IOL for dislocated PCIOL” for T85.29XD (other mechanical complication of intraocular lens, subsequent encounter)?

Clinical information is generally not available to the coder when coding is outsourced, so any assistance provided in the operative note itself can be helpful. This is particularly true for trauma cases (Case No. 1 and Case No. 2 below). Basic material that facilitates accurate coding and optimal payment includes the following:

The case studies below were coded using operative notes.

This patient sustained severe ocular trauma to his right eye while working on machinery, resulting in a corneal laceration with a metallic foreign body. Inspection of the sclera revealed multiple posterior rupture sites. There was a corneoscleral limbal entry site where a large metallic foreign body was situated. The corneoscleral laceration was vertically oriented to the cornea and turned somewhat superonasally on the sclera, extending approximately 2 mm on the sclera and 2 mm to 3 mm on the cornea. The anterior capsule had been compromised, leading to the decision to perform a pars plana lensectomy.

3. S05.31xAOcular laceration without prolapse or loss of intraocular tissue 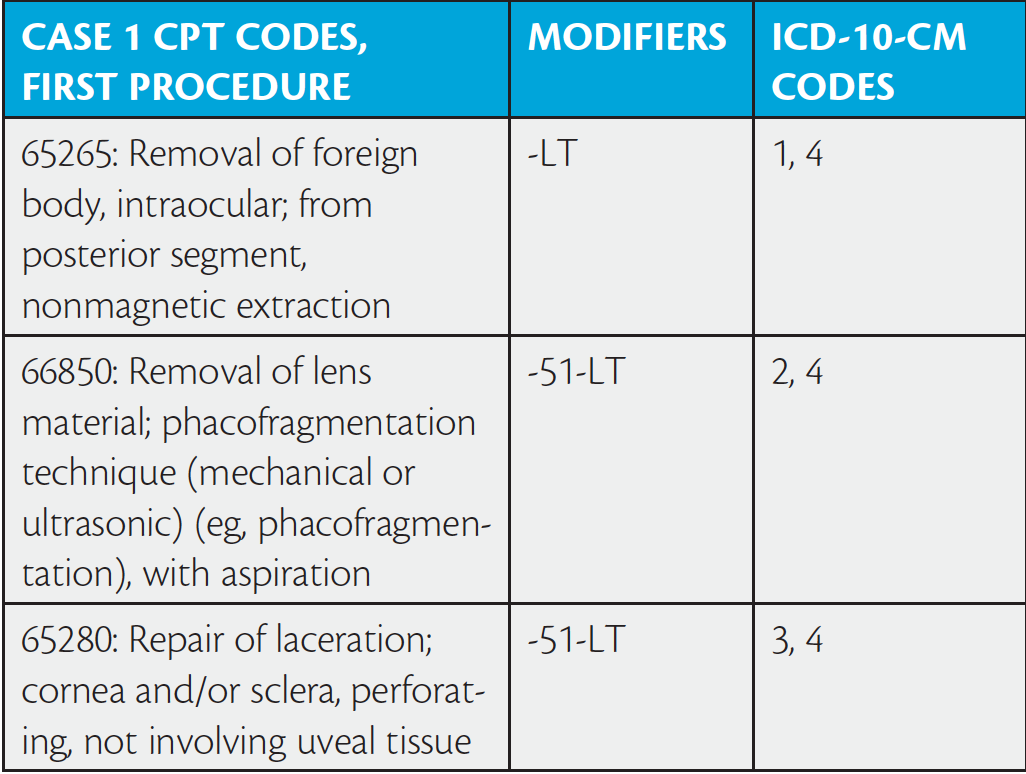 A second procedure was necessitated by the presence of hypotony on the postoperative visit. The patient was scheduled for examination under anesthesia, and slow anterior corneal and scleral wound leaks were found, necessitating additional sutures. The previous sclerotomy sites were also sutured, and it was necessary to reinflate the globe with balanced salt solution. 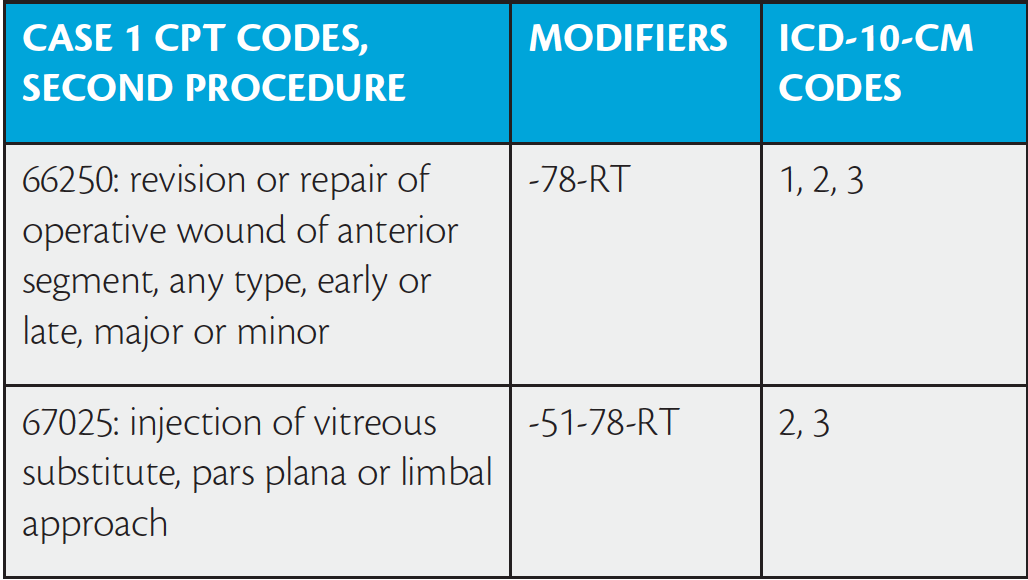 1. H33.42Traction detachment of the retina

This patient had undergone a trabeculectomy in the left eye and presented with a leaking bleb. At this visit, a dislocated IOL was noticed to be posterior to the iris. 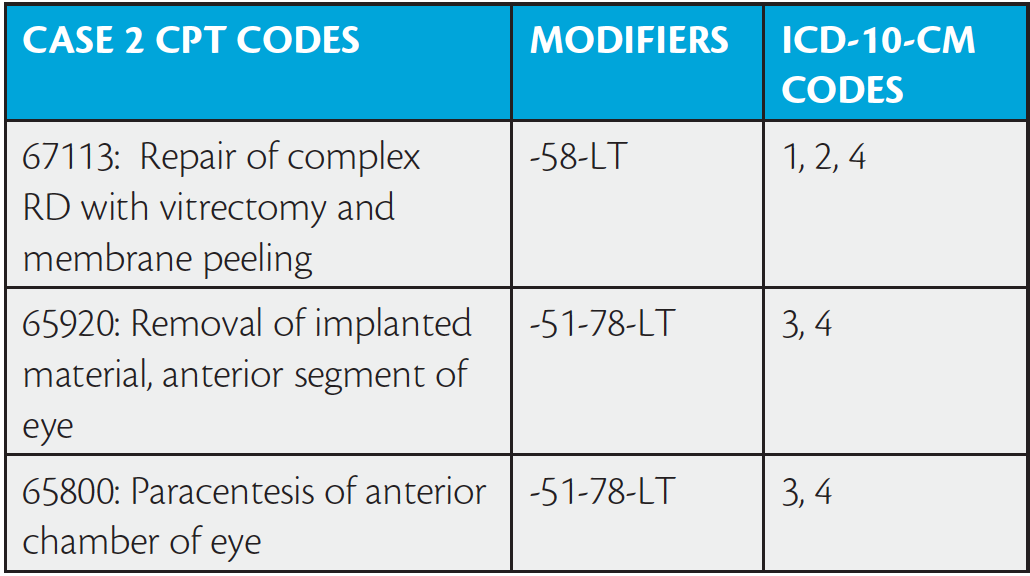 A first attempt to remove the IOL was made using an anterior approach, but the flap from the trabeculectomy prevented access, and the IOL fell back into the vitreous. It was then decided to use a posterior approach. The leaking bleb was repaired. A PPV was performed, vitreous traction from the IOL was severed, and the IOL was brought into the anterior chamber and removed. A secondary IOL was inserted, and an iridectomy was also performed.

Note: Coding is not always straightforward. Two options for coding this complicated case are offered below. 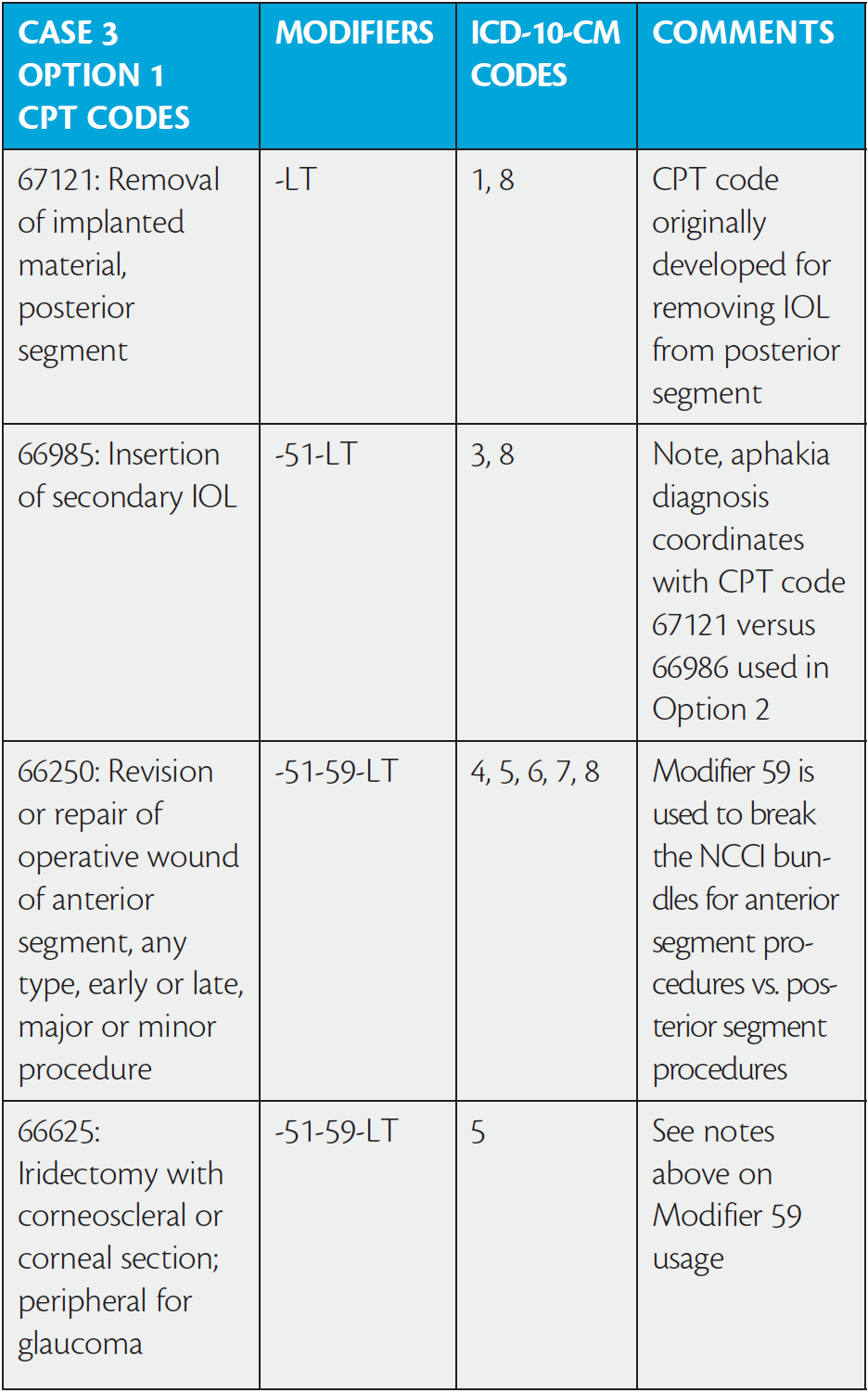 4. H59.89Other postprocedural complications and disorder of eye and adnexa

3. 59.89Other postprocedural complications and disorder of eye and adnexa

Generally, the main causes of payment problems include errors in CPT code selection; incorrect application of or lack of modifiers; and improper use of ICD-10-CM diagnosis codes, especially the use of the mandatory 7th character for injury diagnoses and a different set of 7th characters for glaucoma staging codes. Some helpful takeaway points are listed on the next page.

Do: Participate with your coders and billers and review with them complicated cases such as those shared in this article. A layperson may have difficulty understanding what procedures were performed, the correlating diagnoses, and the relationship of the previous procedures to the current one. Diagnosis selection itself is much more difficult with ICD-10-CM than with ICD-9-CM for individuals without a clinical background.

Don’t: Do not use modifier 59 injudiciously. Be sure a physician approves its use. Overuse of this modifier triggers audits.

Do: Review and share the March 2016 Retina Today article “Troubleshooting the 7th Character.”1 The Centers for Medicare and Medicaid Services revised the interpretation of the guidelines for the use of this character in December 2015 for injury/trauma cases.

Don’t: Do not neglect physician and staff continuing
education on this subject. Rules change regarding ICD-10-CM, as do interpretations.

Do: Make sure your operative notes describe all procedures performed. This may sound obvious, but I have seen cases in which ERM peeling was listed in the operative note section of “surgery performed” but not dictated in the body of the operative notes, resulting in the case not qualifying for coding as complex. I usually can tell from the diagnosis and surgery description, and I ask for a redictation in order to capture all the codes that render the RD repair as complex. Review the dictation format that your residents and fellows use to ensure that it follows that of the Joint Commission (formerly the Joint Commission on Accreditation of Healthcare Organizations). A sample can be found online at: bit.ly/dictationsample.

Don’t: Do not let your staff code from the top section of the operative note, but rather make them learn how to read the description of the surgery, verify which procedures were performed, and code those. In case of an inadvertent omission, the operative notes should be redictated. n

Which Tumor, What Imaging Modality?

Looking Into the Future ... Today

Supported via advertising by Alcon and Oculus

Opportunities in the Uveitis Treatment Pipeline

AMD in 2016: A Review of Treatment Guidelines and the Role of Early Appropriate Therapy

Why Consider the Yellow 577 nm Wavelength?

An Update on the Latest Clinical Trials in Diabetic Macular Edema

Supported via advertising by Regeneron and Notal Vision

Supported via advertising by Alcon and Optos