A primer on using A, D, and S characters in ICD-10-CM vitreoretinal coding.

Most of the codes in ICD-10-CM Chapter 19 (Injury, Poisoning, and Certain Other Consequences of External Causes, S00-T88) contain instructions to use A, D, or S as the 7th character in the diagnosis code sequence. The necessity of using one of these characters occurs with some frequency in vitreoretinal coding. This month’s review focuses on their application for diagnosis coding of services and procedures found in a retinal practice and provides guidance for their use. The Centers for Medicare and Medicaid Services (CMS) provides continuing education on this. The CMS website and YouTube channel are good sources of definitive information.1,2

CHARACTERISTICS OF 7th CHARACTER A, D, and S CODES

A, D, and S codes are defined as follows: A = initial encounter; D = subsequent encounter; S = sequela. Codes in ICD-10-CM may have a varying number of characters containing an alphanumeric mixture. For example, code S05.51 (penetrating wound of orbit with foreign body of right eyeball) contains five characters but requires an A, D, or S as the 7th character, which must be positioned as such. If the selected code has five characters, then one uses an x placeholder in the sixth position so that the A, D, or S falls into the seventh position (eg, S05.51xA). Note: An x can be used to hold the place of any number of characters in order to meet the seven-character requirement.

Different publishers use different methods of signifying the requirement in the ICD-10-CM books. In the version published by the American Medical Association, a rose-colored box appears, as below.3

In comparison, Practice Management Information Corporation’s version uses and in front of each code to indicate that a placeholder x or 7th character is required.4 Example: S05.51 (meaning you should use S05.51xA).

USAGE OF THE 7TH CHARACTER A: INITIAL ENCOUNTER

The word initial has caused some confusion because the usage is different from how most coders have been trained for its use in the Current Procedural Terminology (CPT). The latest instructions from CMS are to disregard the word initial and use A as long as the patient is still receiving active treatment for the condition described by the code.

In CPT, for example, an initial encounter for an office consultation is the first time the patient is examined for that condition, and a subsequent encounter would become an office visit for an established patient. Another example is the use of initial and subsequent for extended ophthalmoscopy. CPT code 92225 is initial, meaning that it is used the first time the provider is performing extended ophthalmoscopy for that specific condition. CPT code 92226 is subsequent, meaning that the code should be used for follow-up examinations for the same condition.

Here are some pointers on using A in the seventh position:

CASE STUDIES: A AND D AS THE 7th CHARACTER

The following case studies demonstrate use of A and D characters in ICD-10-CM vitreoretinal coding.

Patient with severe ocular trauma to his left eye (OS) stated that broken glass had flown into the eye (no further information was given in the operative note). He was examined in the emergency department (ED), and a determination was made that he had sustained a corneal laceration with a foreign body OS. The diagnosis used by the ED was S05.52xA. An ophthalmologist was called to the ED to examine the patient. She also used S05.52xA for her diagnosis as well as diagnoses two and three (listed below). She referred the patient to a retina specialist who performed surgery as indicated below using the same three diagnoses. 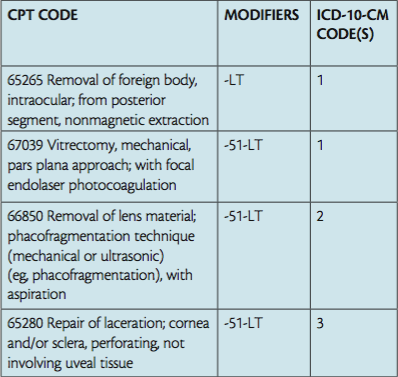 When the retina specialist examined the patient for follow-up 100 days after surgery, he would be still considered in active treatment (medical, perhaps, at that point), and S05.52xA would be used. However, the plan was to return for a checkup, and, because the patient was no longer receiving active treatment at the subsequent visits, the diagnosis code would be S05.52xD.

A patient presented with a rhegmatogenous retinal detachment with a horseshoe break superotemporally and a round break superonasally. The patient was pseudophakic, and the intraocular lens became displaced during the repair procedure. Surgery consisted of PPV repair of the retinal detachment with air-fluid exchange, cryopexy, endolaser photocoagulation, and repositioning of the intraocular lens using a Sinskey hook.

Following the same rules for placement in the seventh position, use D when the diagnosis selected is no longer for treating an active condition but rather for follow-up. Although the follow-up in this sense is often referred to as routine care, do not use this wording, as it may lead Medicare to consider the service medically unnecessary.

D is essentially used when the patient is no longer under active care for his or her condition and is receiving ordinary follow-up care during the healing or recovery phase. Examples of usage might include follow-up diagnostic testing to assess condition of the eye, suture removal, medication adjustment, follow-up visits to assess healing status (does not have to be same provider), and other aftercare. Again, D only has to be used when the selected diagnosis requires a 7th character.

Sequelae (late effects and/or complications) are conditions that occur as a direct result of an acute condition. Scar contracture after a burn is a nonophthalmic example that is easily understood. If the diagnosis is related to disease progression and not specifically to trauma or injury, then it is not necessary to use diagnoses from Chapter 19 that require the 7th character.

Any complication resulting from the acute condition should be coded with the 7th character and not with Z codes, which are used for aftercare (eg, Z98.89–Personal history of surgery). In this context it is critical to differentiate a late complication that eventually requires treatment (eg, scarring from prior surgery or treating scars after burns) from a complication that is more immediate and requires active treatment such as endophthalmitis after an intravitreal injection. In these types of occurrences, A should be used rather than S when the chosen diagnosis code requires a 7th character.

An example is the development of proliferative vitreoretinopathy occurring after primary repair of a rhegmatogenous retinal detachment. When the patient presents, a code from Chapter 7 (Diseases of the Eye and Adnexa), such as H33.41 Traction detachment of retina right eye, may be selected. It is not necessary to use a diagnosis code requiring a 7th character or a Z code. You will find more use for A and D than for S. n

Can Long-Term Response to Anti-VEGF Therapy Be Predicted After Three Injections in Patients With DME?

Applying Research to Practice for Patients with Diabetes

Supported by an independent educational grant from Regeneron Pharmaceuticals.

New Paradigms in the Management and Treatment of Diabetic Macular Edema

Supported by an educational grant from Alimera Sciences.

Sponsored by advertising from Allergan