VVV is typically asymptomatic and benign, but can simulate a life-threatening condition. Know how to tell the difference.

Vortex vein varix (VVV) is an uncommon benign dilation of the vortex vein ampulla, often in the nasal quadrant of the fundus, anterior to the globe equator. This finding is generally asymptomatic and can be multiple and bilateral. The varix assumes a red-brown appearance, simulating a solid intraocular tumor.1,2

• Vortex vein varix is an important simulator of choroidal melanoma.

• Clinical findings and imaging features can help to distinguish between the two conditions.

• Use of ICGA, ultrasonography, and OCT is important for accurate diagnosis.

The main clinical relevance of VVV is its resemblance to small choroidal melanoma and choroidal nevus. Despite similarities in size and color, these conditions can be distinguished based on clinical findings as well as imaging features. The most obvious clinical feature is the dynamic nature of VVV, whereby this vascular lesion changes with gaze. In primary gaze, the varix is typically flat, while in gaze along the meridian of the varix there is filling of the ampulla and evolution of the slowly inflating mass, usually over 30 to 60 seconds.1 Deflation of the varix occurs slowly with resumption of primary gaze. Occasionally, the presence of varix can be confirmed with digital pressure on the globe, leading to deflation of the varix. In cases in which clinical features are not typical, imaging with indocyanine green angiography (ICGA), ultrasonography, and optical coherence tomography (OCT) can serve to differentiate these conditions. Below we describe a case of a patient referred for evaluation of small choroidal melanoma who was found to have VVV.

A 55-year-old man was referred to the Ocular Oncology Service of Wills Eye Hospital in Philadelphia, Pa., for evaluation of a small suspected choroidal melanoma. The choroidal lesion was found on routine evaluation, and the patient was asymptomatic. History revealed no significant past ocular or systemic disease.

On examination, the patient’s BCVA was 20/20 in each eye (OU), and intraocular pressures were normal at 12 mm Hg OU. His right eye was otherwise unremarkable. Evaluation of the left eye revealed a healthy anterior segment and intact macula. Upon gaze superonasally, a red-brown dome-shaped mass was visible, measuring 3 mm in basal diameter and 2 mm in thickness, located at the globe equator and without subretinal fluid or orange lipofuscin pigment (Figure 1A). At the time of examination, it was noted that the mass fluctuated, with deflation in primary gaze and reinflation when the patient’s gaze was along the meridian of the mass, suggestive of VVV and not melanoma.

Imaging with ultrasonography demonstrated a small choroidal mass. Its thickness of 2.0 mm was reduced to 1.1 mm with digital pressure on the globe. Fluorescein angiography showed a slight blush of choroidal hyperfluorescence at the site during varix inflation (Figure 1B). ICGA documented delineation of the hypercyanescent vortex vein ampulla with slow filling of the dilated ampulla taking more than 44 seconds (Figure 1C). The ampulla had approximately 17 tributaries feeding into it. At maximum dilation, the varix measured 2 mm in diameter. Upon digital pressure to the globe, the varix deflated slowly over 1 minute to a diameter of 1 mm. 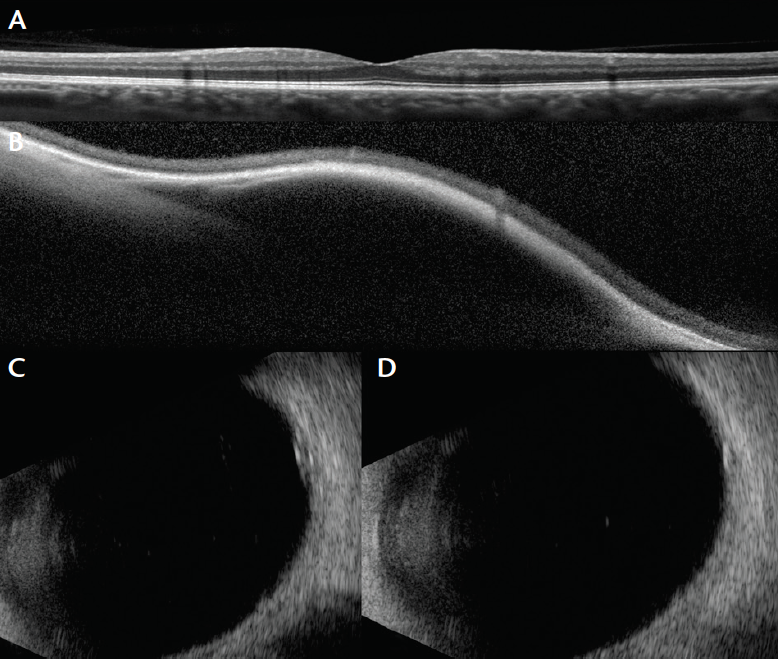 Figure 2. OCT of the patient’s left eye demonstrated intact macula and no subretinal fluid (A). OCT through lesion showed internal hyporeflectivity with smooth surface, consistent with VVV (B). B-scan ultrasonography showed inflated varix upon gaze toward the lesion (C) and deflation on primary gaze (D).

OCT showed an intact macula with no retinal edema or subretinal fluid (Figure 2A). Furthermore, OCT of the dilated mass revealed the smooth walls of the vascular ectasia within the choroid (Figure 2B). There was no solid component. Ultrasound confirmed gaze-evoked inflation (Figure 2C) and deflation upon primary gaze (Figure 2D). The patient was counseled on the benign nature of his diagnosis, and we advised him to attend annual monitoring visits.

The choroid is drained by several venous channels known as the vortex vein system. Typically, at least one tributary drains each of the four quadrants of the eye. The total number of vortex channels draining a single eye can range from four to 15, depending on the individual. Prior to entering a vortex canal through the sclera, the vessels combine to form an ampulla of about 1.5 mm to 2.0 mm in diameter and 5 mm in length, referred to as the vortex vein ampulla. There is an average of four vortex systems per eye. After passing through the scleral canal, the vortex vein combines with other vortex veins before draining into the single ophthalmic vein.1,2

The vascular dilation typically occurs near the globe equator, most often in the nasal quadrant.1 The VVV presents as a reddish-brown nodule deep to the retina in middle-aged adults and older patients.1,2 This condition is typically asymptomatic and benign, and it does not lead to thrombosis or neovascularization. The most important consideration is that this finding often simulates small choroidal melanoma.3

Dilation of the vortex vein ampulla is a gaze-evoked finding and simulates a small dome-shaped choroidal melanoma; however, digital pressure can reduce VVV but not melanoma. The ampulla can dilate up to 6.0 mm in diameter and 2.5 mm in width.1

VVV is usually recognized by its dynamic nature. Typically, VVV is absent in primary gaze but becomes apparent when the patient assumes a gaze in the direction of the lesion.1 Additionally, applying pressure to the globe causes the varix to reduce in size. ICGA helps to distinguish the VVV by delineating the choroidal vasculature and demonstrating the gaze-dependent dilation of the varix.2,4

The cause of VVV is ambiguous, but some speculate that gaze-dependent pressure on the choroidal vasculature with temporary narrowing of the scleral canals or kinking of the episcleral vortex veins can lead to stagnation of outflow and inflation of the varix.1

Choroidal melanoma is a life-threatening condition, and accurate diagnosis is critical, as benign lesions can simulate melanoma. In a large study from an ocular oncology service, pseudomelanoma was represented in 14% of 12 000 patients referred with potential melanoma.1,5 More than 50 pseudomelanoma conditions were identified, including choroidal nevus (49%), peripheral exudative hemorrhagic chorioretinopathy (8%), congenital hypertrophy of retinal pigment epithelium (6%), and hemorrhagic detachment of the retina (5%).5 VVV accounted for less than 1% of pseudomelanomas.1,5

With B-scan ultrasonography, VVV demonstrates gaze-dependent change, unlike melanoma. Typically, the varix inflates with gaze toward the lesion and deflates in primary gaze.4 Moreover, digital or probe pressure can cause deflation of the VVV.3,4

OCT of VVV usually demonstrates an ectatic choroidal vessel with internal low optical signal corresponding to the dilated vein.3,6 ICGA is useful to delineate the choroidal vasculature, and it can clearly show the gaze-dependent vascular tree of the varix.2,4 In summary, VVV is an important simulator of choroidal melanoma. Clinical expertise and imaging are key to diagnosis. n

Support provided by Eye Tumor Research Foundation, Philadelphia, PA (CLS). The funders had no role in the design and conduct of the study, in the collection, analysis, and interpretation of the data, and in the preparation, review, or approval of the manuscript. Carol L. Shields, MD, has had full access to all the data in the study and takes responsibility for the integrity of the data and the accuracy of the data analysis.

A Novel Compound for Treatment of Wet AMD

Management and Treatment of Diabetic Macular Edema After Protocol T

Supported through an unrestricted educational grant by Regeneron Pharmaceuticals.