The visual cycle could be the crucible for treating two important degenerative eye diseases.

Loss of central vision is a devastating consequence of retinal diseases that affect the macula, especially in macular degeneration. Although age-related macular degeneration (AMD) is the leading cause of blindness in the United States,1 young patients are also affected by macular degeneration, namely Stargardt disease, an inherited form of the condition with symptoms occurring before the age of 20. Stargardt disease is characterized similar to AMD—by a progressive worsening of vision due to the loss of light-sensing photoreceptor cells in the retina. The loss of central, high-acuity vision dramatically reduces one’s ability to read, write, and navigate the surrounding environment, significantly reducing one’s quality of life. Because there are no currently approved treatment options for these diseases, much attention has been focused on the development of new therapeutics to prevent or slow disease progression. The visual cycle modulators (compounds that target key components of the visual cycle to prevent cell damage/death in the retina) described in this column may offer new treatment options for patients with these macular diseases. However, to date we have not seen any promising efficacy in treatments targeting the visual cycle.

• Although the accelerated accumulation of drusen is a hallmark characteristic of dry AMD, the relationship between drusen and disease progression is unknown.

• Stargardt disease arises from a mutation in the ABCA4 gene, resulting in accumulation of all-trans-retinal, which leads to RPE and photoreceptor degeneration.

WHAT WE KNOW ABOUT DRY AMD AND STARGARDT DISEASE

Age-related drusen deposits beneath the retinal pigment epithelium (RPE) may have a causative relationship with retinal cell death. Photoreceptors are exposed to high levels of oxidative stress because of their role in capturing light energy and the high perfusion of retinal tissue. Photo-oxidative stress can, in turn, lead to cell damage due to the accumulation of reactive oxygen species, subsequent DNA damage, and the oxidation of proteins. When photoreceptors shed their outer segments, which are then digested by RPE cells, damaging agents are eliminated. Drusen formation may partly be caused by an impairment in RPE metabolism of outer segments, causing the deposition of drusen components such as lipofuscin, A2E, heavy metals, lipoproteins, and calcium phosphate.2-5

Although the accelerated accumulation of drusen is a hallmark characteristic of dry AMD, it is not known whether drusen specifically play a role in the pathogenesis of the disease. Some suggest that drusen deposits are simply phenomena related to aging, while others theorize that deposits prevent nutrient exchange between the choriocapillaris and RPE, leading to RPE and photoreceptor cell death.6 It is also hypothesized that drusen attract inflammatory cells which, upon accumulating at the site of drusen deposits, cause RPE and photoreceptor cell death.7-9 Even so, it has been shown that laser ablation of drusen deposits does not improve visual acuity nor prevent disease progression to dry AMD.10 Further research is needed to fully understand the role drusen play in dry AMD pathogenesis.

There is no approved treatment for dry AMD. The Age-Related Eye Disease Study (AREDS) and AREDS2 found that consumption of antioxidants and zinc may reduce the risk of developing advanced AMD by 25%.14,15 However, in a subgroup of patients with GA, no benefit was found in preventing or delaying GA area growth.

Stargardt disease most commonly is due to a mutation in the ABCA4 gene. ABCA4 is a transmembrane protein that moves all-trans-retinal—the end product of the visual cycle—from the photoreceptor disk to the cytoplasm so that it may be converted to retinol and re-enter the visual cycle. When this protein does not function properly, all-trans-retinal accumulates to toxic levels, resulting in RPE and photoreceptor degeneration. There is no approved treatment for Stargardt disease.

Recent interest in the treatment of dry AMD and Stargardt disease is focused on targeting the visual cycle—the biochemical process that regenerates the visual pigment 11-cis-retinal after light exposure converts it to all-trans-retinal—to prevent the accumulation of toxic by-products known to damage the RPE. RPE cells are critical to photoreceptor health and function due to their role in providing metabolic support and recycling of 11-cis-retinal. During the visual cycle, toxic by-products, notably the lipid-rich compound called lipofuscin, accumulate in the RPE. Lipofuscin accumulation has been suggested by numerous reports to cause RPE cell death in Stargardt disease and dry AMD.16-18 A key component of lipofuscin is A2E, a bisretinoid composed of two molecules of vitamin A aldehyde and one molecule of ethanolamine. A2E has been shown to exhibit a wide variety of negative effects on RPE cells, including inducing apoptosis, and forms during normal visual cycle function.17,19,20 As excessive A2E/lipofuscin accumulation is thought to contribute largely to RPE cell death and disease progression in AMD and Stargardt disease, modulation of the visual cycle is an attractive target to slow or prevent disease progression. 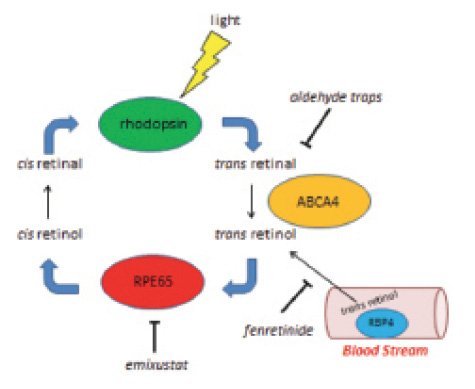 Figure. The visual cycle is a biochemical process by which light is converted into electrical energy. The diagram above illustrates where in the visual cycle the molecules in this article (emixustat, fenretinide, and aldehyde traps) slow or inhibit this process.

THE VISUAL CYCLE UNDER STUDY

Multiple small molecules have been developed to target different components of the visual cycle in an effort to reduce the accumulation of toxic byproducts in the RPE (Figure). Emixustat (Acucela) is an inhibitor of the RPE-specific protein RPE65, which converts all-trans-retinyl to 11-cis-retinol visual pigment. As this reaction is rate-limiting in the visual cycle, targeting RPE65 may provide a way to control the visual cycle such that toxic by-product accumulation is reduced.21 In vitro and in vivo studies showed that emixustat inhibits RPE65 in a dose-dependent, reversible manner and reduces the accumulation of A2E in the RPE.22 Due to the exclusive expression of RPE65 by RPE cells, emixustat is highly selective. In clinical trials, emixustat suppressed rod photoreceptor sensitivity, consistent with the proposed mechanism of action.23-25 However, results from the phase 2b/3 SEATTLE study did not show any significant difference in lesion growth rate or visual acuity changes between treatment groups.26

Fenretinide, a synthetic retinoid derivative, targets the visual cycle indirectly by preventing retinol (vitamin A) delivery to the RPE. Retinol is transported from the bloodstream to the RPE by retinol binding protein (RBP4).27 RPB4 is essential for transport because unbound retinol is cleared from the bloodstream by the kidneys due to its small size. As an RBP4 antagonist, fenretinide competes with retinol for RBP4, thereby reducing the amount transported to the RPE and available for entry into the visual cycle.28 Because visual cycle function depends on the presence of retinol, reducing the amount delivered to the RPE could decrease visual cycle activity, thereby decreasing toxic byproduct accumulation. In a mouse model of excessive A2E accumulation in RPE cells, fenretinide administration was shown to reduce serum retinol levels in a dose-dependent manner and arrest the A2E accumulation.29 In a clinical study with patients diagnosed with GA, oral fenretinide (ReVision Therapeutics) did not show a significant reduction in growth of GA lesions compared with the placebo treated groups.30

Another mechanism by which to limit A2E and lipofuscin production is to trap the all-trans-retinal (an aldehyde) produced during the visual cycle. A2E is partially formed by these aldehydes, and it stands to reason that capturing them before they have a chance to react would prevent the buildup of this toxic molecule. A new class of drug called aldehyde traps, which includes VM200 (Vision Medicines), may bind—or “trap”—free aldehydes before they have the opportunity to react and form A2E. In preclinical studies, VM200 preserved retinal structure and function in a dose-dependent manner, paving the way for a phase 1 safety study in human subjects.

Another molecule being developed is soraprazan (Katairo GmbH), which promotes removal of lipofuscin from RPE. Although the precise mechanism of soraprazan is unknown, researchers speculate that by binding excess aldehydes, soraprazan causes them to break down into smaller pieces, allowing the cell to rid itself of the debris. It is important to note that some aldehydes in the body are beneficial—vitamin B, for example—and systemic administration of a nonspecific aldehyde trap should be monitored for off-target effects. Nevertheless, aldehyde traps may be effective therapeutic agents for preventing the accumulation of A2E/lipofuscin in the RPE, thereby preventing AMD onset and progression.

Patients with neovascular AMD often respond to treatment with anti-VEGF agents, but those diagnosed with the dry form of the disease, approximately 85% of AMD cases, have no approved treatment options available to them.31 Children diagnosed with Stargardt disease are most in need of vision-preserving therapies. The recent failures in clinical trials for visual cycle modulators may be due to the challenging endpoint of progression of GA. In the AREDS studies, GA progression was not linked with nutritional supplement intake.

Supported through an unrestricted educational grant from Regeneron Pharmaceuticals.

MicroPulse Laser Therapy in the Management of Diabetic Macular Edema