Modifiers and Indicators in Ophthalmic Diagnostic Testing: a Compendium

A comprehensive review of common modifiers, indicators, and descriptors used in the payment of diagnostic tests.

TOOLS OF THE TRADE

There are two main sources of information necessary for determining payments for diagnostic testing. The first is the American Medical Association book CPT Professional Edition.1 The CPT book provides the full code descriptions, notes whether payment will be rendered for each eye separately or together, and describes other requirements for a given code, such as the mandate for an interpretation and report.

The second source is the Medicare Physician Fee Schedule Database (MPFSDB), which can be found at: bit.ly/FeeSched16. The column designated “Bilateral Surg” in the spreadsheet contains a numerical reference (0, 1, 2, 3, or 9) that indicates different payment policies for surgeries and diagnostic tests. The Table on the next page lists the payment explanations for the unilateral/bilateral designations in the MPFSDB. The indicator in the bilateral surgery column determines whether a given diagnostic test CPT code is paid unilaterally or bilaterally. Note that the bilateral surgery indicator column contains indicators that are used for surgical procedures and diagnostic tests; however, only indicators 2 and 3 are actually used for diagnostic tests.

MORE ON UNILATERAL AND BILATERAL DESIGNATIONS

An ophthalmic diagnostic test is commonly referred to as unilateral when each eye or side tested is paid separately and as bilateral when the payment encompasses performance of the test on both eyes or sides.

CPT is arranged so that a code is followed by a descriptor that starts with a capital letter. All information before the semicolon in that descriptor is considered included in subsequent, uncapitalized, indented code or codes and is part of the descriptors in those codes. Thus, a typical pair of entries looks like this:

As you can see, code 92134 in the CPT book is indented under 92133 and simply states “retina,” but it is read as follows: Scanning computer diagnostic imaging, posterior segment, with interpretation and report, unilateral or bilateral; retina.

MODIFIER 50 VS. RIGHT AND LEFT MODIFIERS

Do’s and Don’ts for Diagnostic Tests 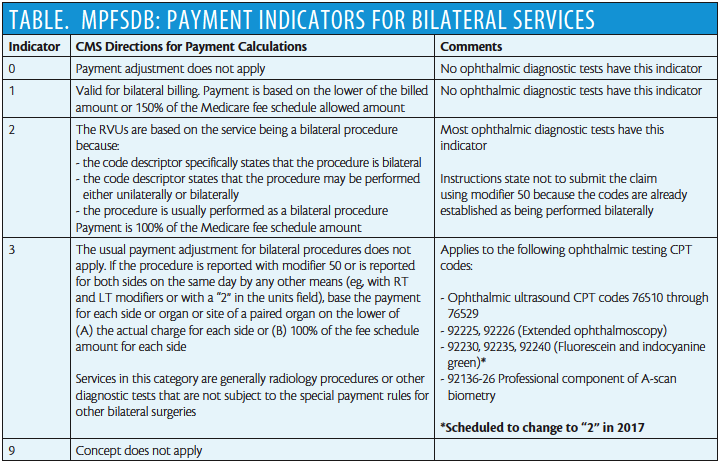 MODIFIER 52 AS APPLIED TO DIAGNOSTIC TESTS

According to CPT, modifier 52 signifies that the service performed is reduced from what is normally done. This modifier is used to indicate that a service is reduced when (A) it is performed on only one side and (B) the payment is normally based on payment for testing of both sides.

Although medical necessity remains the primary requirement for any diagnostic test, this determination is not without issues. One issue involves the legitimacy of billing for a second side on unilateral tests, such as extended ophthalmoscopy, in the absence of symptoms or findings pertaining to that eye. Another issue involves trading off billing one test for another (eg, fundus photography for optical coherence tomography [OCT]) in order to capitalize on the financial differential.2

The first apparent difference in the definitions above is the use of the words “initial” and “subsequent” in the two codes. The difference is not related to the status of the patient as a new or established patient; rather, CPT code 92225 is used to code when the patient is being examined for the first time for a specific condition, whereas CPT code 92226 is used for coding subsequent examinations of the same patient for the same condition. It is quite possible that an initial service (92225) may be coded more than once for a given patient.

Also of note, both codes have a bilateral surgery indicator of 3, meaning that the provider will be paid 100% of the Medicare fee schedule allowed amount for each eye. This is also true for fluorescein angiography and indocyanine green angiography; however, next year these are scheduled to be paid as unilateral/bilateral tests, resulting in the indicator reverting to 2.

The CPT description for OCT (92134) for the retina was given above in the discussion of “unilateral or bilateral.” It does contain the phrase “unilateral or bilateral,” with a bilateral surgery indicator of 2, and it is therefore billed only once regardless of whether one or both sides are tested. Do not use modifier 52 when only one side is tested. Caution is also warranted when billing fundus photography in lieu of OCT because age-related macular degeneration treatment is based on the results of OCT; thus, it is OCT, not fundus photography, for which there is medical necessity.

92250 Fundus photography with interpretation and report

Fundus photography has a bilateral surgery indicator of 2 and does not contain the designation “unilateral or bilateral” in the descriptor. Therefore, if only one eye is documented, then use of modifier 52 (reduced services) is appropriate.

CPT codes for ophthalmic and orbital ultrasound (76510 through 76513, 76529) do not have any descriptor designation for laterality. The bilateral surgery indicator for each one is 3; thus, each side can be coded separately, as long as there is medical necessity for testing each side. n

Three Concepts to Buzz About

Noninfectious Posterior Uveitis: The Rationale for Steroid Use

Supported through an unrestricted educational grant by Santen.

Changing Your Perspective in the OR