Coding clues for surgical procedures with some element of anterior segment involvement.

Retina surgeons seem to increasingly be receiving referred surgical cases that partially or entirely involve the anterior segment. Because anterior and posterior segment physicians for the most part have different approaches to surgery, I receive calls for coding help from retina specialists and their billers, many of whom have coded only for retina and vitreous surgeries in the past.

This article presents a variety of cases that have been sent to retina specialists and that partially or entirely involve anterior segment procedures. The difference in surgical approaches is apparent. In some cases, quoted sections have been edited for clarity.

Silicone oil may be subsequently removed from the posterior segment or left in place, depending on the case. Migration of silicone oil into the anterior segment is a complication usually requiring surgical intervention by a retina specialist.

History: A patient with proliferative diabetic retinopathy previously underwent repair of a retinal detachment with vitrectomy and injection of silicone oil, which subsequently migrated into the anterior segment.

Operative Notes: “A 27-gauge needle was introduced through the pars plana 3 mm posterior to the limbus superiorly, and the silicone oil droplet behind the anterior chamber intraocular lens [IOL] was engaged. It was impossible, however, to remove the entire silicone oil bubble in this manner. Conjunctiva was opened nasally and sclerotomies were fashioned 3 mm posterior to the limbus at the 8 o’clock position and the 10 o’clock position. A 4-mm infusion port was secured infranasally. Direct inspection through the pupil showed the tip to be unobstructed, and the vitrectomy instrument was introduced anteriorly. The remainder of the silicone oil droplet was removed. Interestingly, a second oil droplet presented itself and was removed as well. In an effort to make sure that all silicone oil was removed, an infusing light pipe was then introduced supranasally and an air-fluid exchange was performed. Saline was introduced and removed as well in the hopes that all silicone was washed clean. Fluid was then left posteriorly with an air bubble anteriorly, and the sclerotomies were cleaned of vitreous and closed… .”

1. T85.698A Other mechanical complication of other specified internal prosthetic devices, implants, and grafts

History: The patient had previously undergone surgery for repair of retinal detachment by vitrectomy with silicone oil, which was present in the right eye subconjunctivally and in the anterior chamber.

Operative Notes: “A 25-gauge MVR/trocar system was used to create an inferotemporal port through pars plana. A similar technique was used to create superotemporal and superonasal ports… . A nasal peritomy was performed, and subconjunctival oil was excised. A supersharp was used to make a paracentesis superonasally and another temporally. The oil was then irrigated out of the anterior chamber. The oil was then attempted to be removed through the ports; however, there was no posterior egress. Once adequately flushed, the paracenteses were hydrated and found to be watertight … .”

1. T85.698A Other mechanical complication of other specified internal prosthetic devices, implants, and grafts

• Please note that the operative notes on this case come from an academic center and were dictated by a resident.

• CPT code 65920 is usually used for procedures involving removal of an IOL (without secondary implantation at the same session); however, the code itself refers to anterior segment and was selected over excision of a conjunctival lesion.

• CPT code 65800 is used for the anterior chamber washout.

History: The patient presented with the diagnoses listed below for problems in the left eye and was taken to surgery by the retinal surgeon.

Operative Notes: “A combination of a Bard-Parker knife and Colibri forceps was used to remove heavy calcific band keratopathy. Next, a 25-gauge trocar was placed into the nearly flat anterior chamber superonasally and the infusion port was connected. A 20-gauge sutureless trocar was then positioned in the suprachoroidal space inferonasally, and drainage of serosanguineous fluid was obtained. The anterior chamber flattened markedly. Next, a second 25-gauge cannula was placed inferotemporally, and the infusion port was switched to that location into the anterior chamber. From the superonasal port, end-gripping forceps and vitrectomy were used to open up as much of the pupillary membrane as possible. It was quite thickened and hard, but the lens implant was exposed and the edges of the pupil as well. No further drainage was obtained moving the choroidal drainage trocar inferonasally, so this was removed… . It was felt that adequate choroidal drainage had been obtained… .” 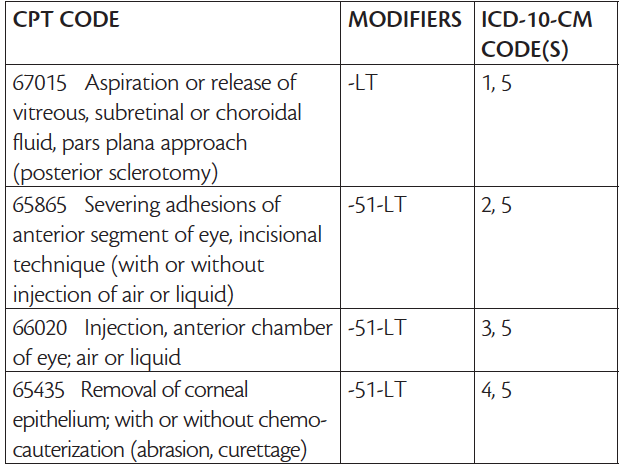 Comment: This case presents both CPT and ICD-10-CM coding issues. It is not uncommon to find that no procedure code or diagnosis code fits exactly. CPT specifies that, if the code does not describe what was performed, then the unlisted code must be used. Unfortunately, use of the dreaded unlisted code results in the claim being pulled out of standard processing and consequently a long wait for payment. Also, an ambulatory surgery center (ASC) has no way of processing unlisted codes, so the claim cannot be paid for the ASC. In my opinion, the second diagnosis code and CPT code 65865 were accurate enough to use in this complicated case.

History: The patient had previously undergone a trabeculectomy and presented with an IOL malpositioned in the posterior segment of the left eye.

Operative Notes: “A dislocated lens was noted posterior to the iris. The eye felt soft. A superior limbal conjunctival incision was made from the 3 o’clock to the 9 o’clock position. There was a trabeculectomy bleb superotemporally that appeared to be leaking. A 23-gauge trocar was placed in the inferotemporal quadrant 3.5 mm from the limbus. The infusion cannula was placed in the trocars, and correct position within the vitreous cavity was confirmed prior to starting the infusions. At this point, it was obvious that the trabeculectomy flap would prevent successful completion of the IOL exchange, and so interrupted 8-0 nylon sutures were used to close the trabeculectomy flap on the sclera. The pupil was small, and therefore equidistant iris hooks were placed to enlarge the pupil using a 25-gauge needle to make the limbal incision. Next, temporal and nasal trocars were placed 3.5 mm posterior to the limbus. The light pipe and vitrector were introduced into the vitreous cavity, and under BIOM [Oculus] viewing the posterior segment was inspected. The IOL was displaced into the posterior segment. A core vitrectomy was performed. Intravitreal Kenalog [triamcinolone acetonide, Bristol-Myers Squibb] was injected to visualize any remaining vitreous. Vitreous traction was removed from the IOL implant … . Next, attention was redirected to the anterior segment. A 7 mm long scleral tunnel was created superonasally, avoiding the area of the previous trabeculectomy flap. A keratome was used to enter the anterior chamber. Viscoelastic was injected into the anterior chamber … The IOL was grasped using the extrusion cannula. It was brought to the anterior chamber, and the leading haptic was externalized through the scleral tunnel incision. The scleral tunnel was then enlarged to a full 7 mm, and the one-piece IOL was extracted from the anterior chamber … The vitrectomy handpiece was used to created a temporal iridectomy … An anterior chamber IOL was placed in the anterior chamber over the iris plane … .”

This case can be coded two ways; the choice is yours.

2. T85.9xxA Other specified complications of … implants

4. H59.89 Other postprocedural complications and disorders of eye and adnexa, not elsewhere classified 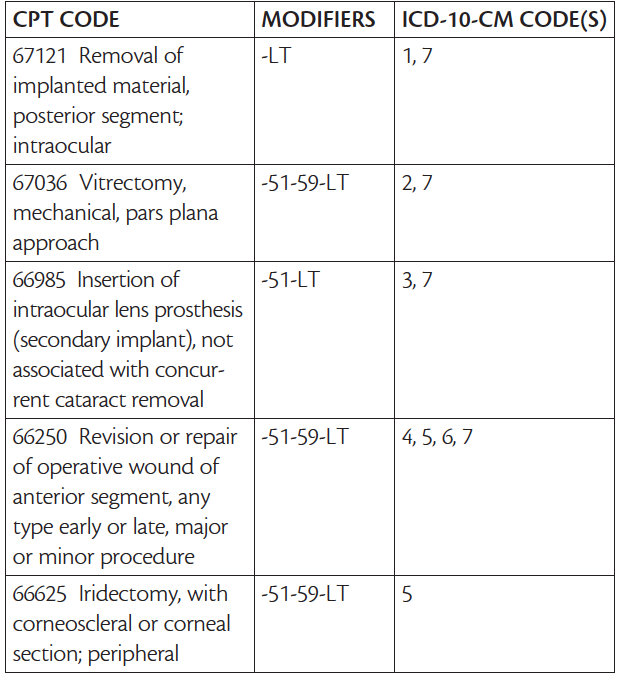 2. T85.9xxA Other specified complications of … implants

3. H59.89 Other postprocedural complications and disorders of eye and adnexa, not elsewhere classified 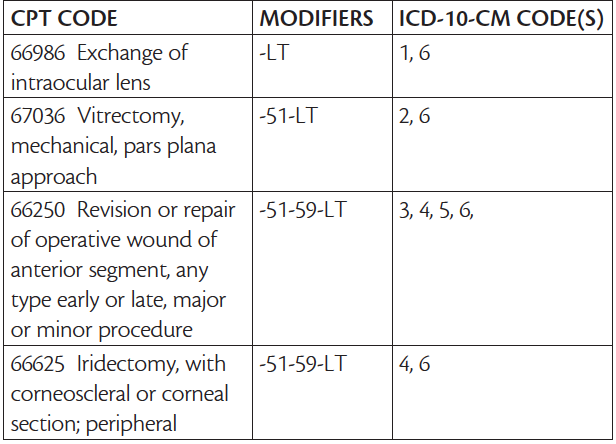 • These are the most complicated types of cases to code because there are many National Correct Coding Initiative bundles between the anterior segment and posterior segment codes. Modifier 59 is used to break the bundles (code-pairs); however, in this case, the codes are unbundled due to the work being performed in the different segments for different diagnoses.

• CPT code 67121 was originally developed for removal of IOLs displaced into the posterior segment.

• This particular case involved both anterior and posterior pathology.

History: The patient was referred after complications, including retained lens fragments and malpositioning of the IOL, occurred with cataract surgery. This particular surgeon has these types of cases referred all the time and has become quite proficient in performing the surgery.

Operative Notes: “The conjunctiva was opened from inferonasal to inferotemporal. Partial thickness limbus-based scleral flaps were created 180° apart, as marked by an astigmatic marker. Four 25-gauge sclerotomies were created 2 mm posterior to the limbus in the bed of each scleral flap, 4 mm apart. The infusion was placed inferotemporally away from these flaps. 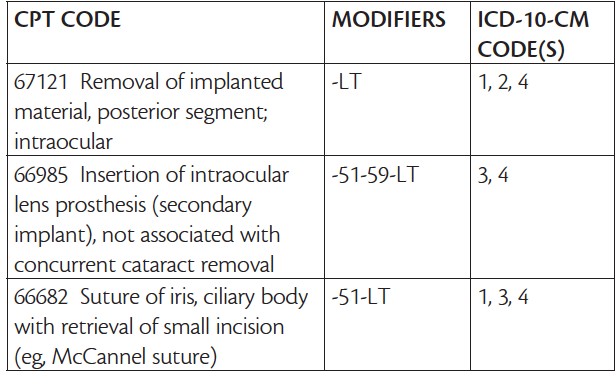 25-gauge vitrectomy was carried out … The IOL, retained lens fragments, and capsule were seen on the macular surface. Intraocular forceps were used to retrieve these and place them on the iris.

A limbal wound was made with a 2.75-mm keratome. The anterior chamber was filled with Healon [sodium hyaluronate, Abbott Medical Optics] and was kept filled throughout the case. IOL scissors were used to make a partial cut in the haptic, and the IOL was removed from the eye in a ”Pac-Man” fashion. The retained lens fragments and capsular remnants were similarly removed. The anterior chamber was filled with Healon, and an Akreos lens [Bausch + Lomb], which had been prepared by placing 8-0 Gore-Tex [PTFE, W.L. Gore] sutures from each eyelet, was folded and inserted into the anterior chamber. The IOL was centered … and the Gore-Tex sutures tied… .”

Comment: Formerly in CPT there was a parenthetical comment after code 66985 indicating that CPT code 66682 should be used for suturing of IOLs. The comment has been removed, but the usage remains. n

Become the Stephen Curry of Your OR

Zika Virus: Brazil and Beyond

Effective Treatment Strategies for the Management of Diabetic Macular Edema

Supported through an unrestricted educational grant by Alimera Sciences.

Supported via advertising from Alcon and Oculus Surgical

AMD Disease Education Resource Center: The Effect of Drug Selection on Outcomes in Patients With AMD

DME in 2016: A Review of Treatment Guidelines and the Role of Early Appropriate Therapy

Supported by an unrestricted educational grant from Regeneron Pharmaceuticals.