Choroidal Nevus Growth Over 13 Years: Is It a Problem?

Some benign choroidal nevi can demonstrate minimal and slow enlargement without becoming malignant.

• Choroidal nevus generally remains relatively stable over time, with a slight potential for growth into melanoma.

• Generally, nevi that demonstrate enlargement of 1.0 mm to 1.5 mm over 10 years or more represent benign growth without malignant behavior.

• Nevi that demonstrate enlargement over 5 years or less and have related factors of subretinal fluid and orange pigment tend to represent melanoma. Assessment of risk factors is crucial.

A 65-year-old Caucasian woman with hypertension was referred in 2003 for evaluation of an asymptomatic choroidal mass in the right eye (OD). Visual acuity was 20/25 OD and 20/20 in the left eye (OS). Intraocular pressure was normal in each eye (OU), and there was mild nuclear sclerosis of the lens OU.

Funduscopy revealed three small, flat choroidal freckles along the inferotemporal equator OS. The fundus OD demonstrated an inferonasal pigmented choroidal nevus measuring 7 mm in basal dimension and 2.2 mm in thickness on ultrasonography. No subretinal fluid or orange pigment (lipofuscin) was seen. Additionally, the lesion displayed overlying drusen, which is a sign of chronicity.

On ultrasonography, the mass demonstrated high internal reflectivity on A-scan and dense echogenicity on B-scan, consistent with choroidal nevus. Given these findings and the low risk for transformation into malignant choroidal melanoma, a decision was made to observe. The patient was followed on a 6-month, then 1-year basis without observed tumor change.

On the most recent examination, 13 years after initial diagnosis, the nevus measured 8 mm in basal dimension and 2.5 mm in thickness on ultrasonography. When fundus images from 2005 to 2016 were compared, mild enlargement of approximately 1 mm over 11 years was noted (Figure). This raised a question about when one should be concerned that growth of a nevus represents malignant transformation. There may not be an easy answer, but below are some of our thoughts based on scientific evidence and experience. 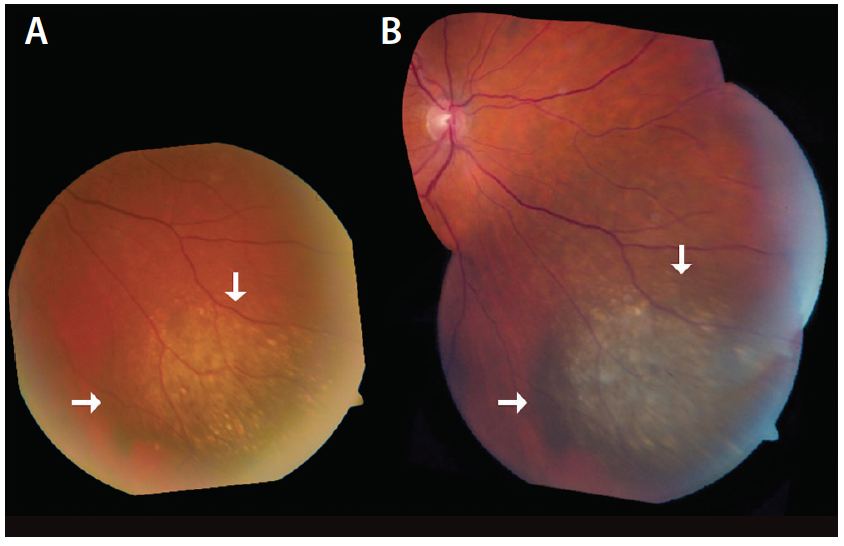 Figure. Benign enlargement of choroidal nevus over 11 years. In 2005, the choroidal nevus measured 7 mm in base and 2.2 mm in thickness (A). In 2016, the nevus had minimally enlarged, mostly on the superonasal margin, by 1 mm or less (B). In addition, there was a subtle increase in thickness to 2.5 mm.

Most clinicians believe that, if a choroidal nevus demonstrates photographically evident growth, then there is concern for malignant transformation.4 This premise is based on the understanding that choroidal nevus generally remains stable throughout adult life. Furthermore, large clinical studies documenting choroidal nevus transformation into melanoma have identified features indicative of potential risk for metastasis.4,5 Risk factors for detection of choroidal melanoma at the earliest point, generally when the tumor is similar to the size of a nevus, have been identified.4,5 These factors assist in the assessment of the potential for nevus transformation into melanoma, and they include thickness of 2 mm or more, presence of subretinal fluid, symptoms such as metamorphopsia and photopsia, orange pigment, margin within 3 mm of the optic disc, ultrasonographic hollowness, absence of halo, and absence of drusen. The presence of three or more of these factors predicts a more than 50% chance for tumor growth within 5 years.6

Not all nevi with enlargement prove to be melanoma. In general, those that demonstrate minimal enlargement of 1.0 mm to 1.5 mm at a slow rate over 10 years or longer typically represent benign growth of the nevus without malignant behavior.3 These lesions tend to display other chronic features such as drusen and retinal pigment epithelium alterations, and they rarely show other risk factors such as subretinal fluid or orange pigment. By comparison, those that demonstrate enlargement over a short period of 5 years or less and that have related factors of subretinal fluid and orange pigment tend to represent melanoma.4,5,7

In a long-term study of 284 choroidal nevi documented with fundus photography at each visit, it was found that 89 (31%) demonstrated slight enlargement of approximately 1 mm or less over a mean of 15 years of follow-up.3 In that series, nevus enlargement was more commonly detected in patients younger than 40 years (54%) compared with patients older than 60 years (19%, P .001). Thus, in the absence of other risk factors, some benign choroidal nevi can demonstrate minimal and slow enlargement without true malignant transformation, as in the case discussed here.

In summary, an enlarging choroidal nevus could potentially represent a life-threatening melanoma, but it could also represent a benign nevus. If the time interval is a short period of months to a few years, the lesion could represent melanoma, but if the growth occurs over more than 5 to 10 years, it could represent benign enlargement of the nevus. Likewise, if the amount of growth is 1 mm or less, then the lesion is likely a nevus, whereas growth of 1 mm or more would be more suspicious for melanoma. Assessment of risk factors is critical.

No conflicting relationship exists for either author.

Support provided by the Eye Tumor Research Foundation, Philadelphia, Pa. (CLS). The funders had no role in the design and conduct of the study, in the collection, analysis, and interpretation of the data, and in the preparation, review or approval of the manuscript. Timothy S. Fuller, MD, has had full access to all the data in the study and takes responsibility for the integrity of the data and the accuracy of the data analysis.