Is OCTA Right for Your Practice?

This imaging technology has potential—but does it meet your needs and expectations?

When colleagues find out that my practice was an early adopter of optical coherence tomography angiography (OCTA), they often ask what the technology could do for their own practices. This is typically then immediately followed with a question about whether insurance or the Centers for Medicare and Medicaid Services (CMS) reimburses for the use of OCTA.

While we were in the first 6 months of using OCTA in our practice, my answer to the first question was that the technology was just “really cool.” Initially our group struggled to appreciate the full benefits of this amazing technology. Now, however, we have learned how to get the most out of the equipment, and my answer has dramatically changed. I tell these colleagues some or all of what I will relate to you in this article.

• The most obvious advantage of OCTA over FA is that it is noninvasive.
• There are no focus issues with OCTA, and images are more detailed than those seen with traditional angiography. Additionally, OCTA images are not obscured by leakage from damaged vessels.
• Despite its many advantages, OCTA is notwithout limitations, one being a lack of additional reimbursement.

My answer to the question on reimbursement, however, remains the same: No.

Roughly 2 years ago, Carl Zeiss Meditec approached my practice with the opportunity to demo a beta version of its OCTA system. We encountered some hiccups along the way, but eventually we learned of many potential benefits of this new imaging modality.

We received the new Cirrus HD-OCT 5000 unit with the AngioPlex OCT Angiography platform and set it up in an available workup room. The system was initially not tied in to our viewing software system because it was not expected to become a permanent fixture. This meant that any patient we wanted to image with OCTA would have to be reimaged with our conventional equipment too, and that we would have to walk across the office to view the OCTA images directly on the device. This inconvenience led us to underutilize the device initially.

To fix this issue, we used a two-pronged approach. First, we placed the OCTA unit in our imaging room, integrating it directly into the clinical flow and our routine. Second, we challenged our photographers to identify and image anyone who they suspected would be a good candidate for OCTA. The photographers embraced this, and they enjoyed getting to see images from a vascular perspective that they had seen for years in cross-section.

Another issue we encountered was that, although the detail of the retinal vasculature straight from the device was amazing—which is particularly important for patients with diabetes or venous occlusions—we did not see the great images of choroidal neovascularization (CNV) that some of our colleagues had shown at meetings and conferences. The reason for this was that the images, particularly those of CNV, require manipulation. The photographer or physician needs to isolate the vessels using the device’s software in order for them to be viewed in all of their glory. We remedied this issue in our office by connecting the unit to our viewing software so that our physicians could manipulate the images during their standard workflow.

OCTA is a marvel of engineering, and its ability to document the vasculature of the eye in a noninvasive manner is incredible. Once the “wow” factor wears off—and it takes a while for this to happen—one is left wondering exactly how OCTA is better than traditional fluorescein angiography (FA).

The most obvious advantage of OCTA over FA is that it is noninvasive. Although the risks of fluorescein injection are relatively low, one has to encounter only a single episode of anaphylaxis or cardiac arrest to appreciate one’s distance from general medicine training.

Although image acquisition takes a bit longer for OCTA than for a normal macular scan, it is still much shorter than the 5 to 15 minutes we wait for late-phase FA images, and it eliminates the time needed for fluorescein injection. This all adds up to significantly improved clinic flow.

The image detail and resolution achieved with OCTA is remarkable (Figure), and there are no focusing issues as can be seen with traditional angiography. Even when compared with other systems that use scanning laser ophthalmoscopy, in which focus errors are drastically reduced, OCTA images are much more detailed and are not obscured by leakage from incompetent or damaged vessels. 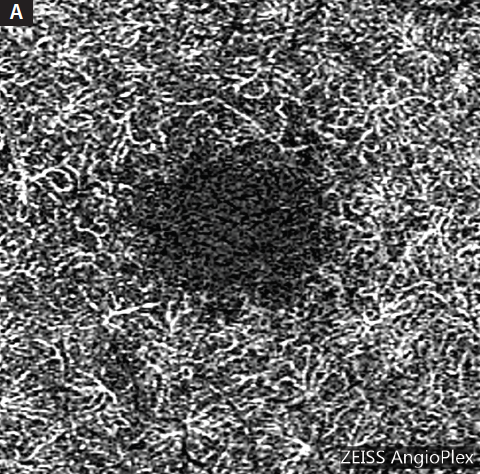 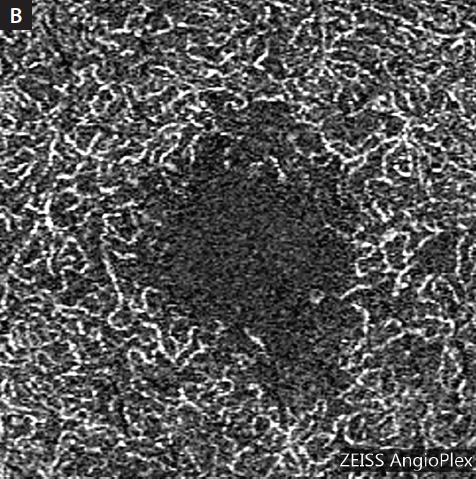 Figure. Deep plexus images taken with the Cirrus HD-OCT 5000 and AngioPlex OCT Angiography platform showing the striking contrast between a normal eye (A) and an eye with early diabetic changes (B).

One unique aspect of OCTA that I did not appreciate at first was the ability to segment layers of the retina and deep vasculature. For example, one can image the deep retinal capillary plexus in isolation from the overlying superficial vessels. Using this segmentation feature, one can better identify early changes to the foveal avascular zone in patients with diabetic retinopathy and understand and visualize conditions affecting the middle retina (eg, paracentral acute middle maculopathy) more effectively.

Visualization of the choroid and choriocapillaris provides unique insights into patients with recently recognized conditions such as pachychoroid pigment epitheliopathy and choroidal sclerosis or atrophy. OCTA allows us to visualize the choroid and choriocapillaris with greater en-face detail. The images are, in some ways, superior to ICG when evaluating the details of these hard-to-image layers.

OCTA allows physicians to better reconcile en face OCTA images with the cross-sectional images that we are accustomed to seeing. This is further enhanced by the ability to perform Doppler imaging that can separate the retinal vasculature from the choroidal vasculature in cross-section.

OCTA enables us to perform quantitative measurements on blood flow in the eye, which allows perfusion mapping of the macula that can be followed over time. This has the potential to change our clinical care in much the same way that macular change analysis changed how we care for patients, by allowing us to look back at how a patient’s blood flow has changed over time in relation to his or her disease state and see the effects of our therapies on the eye.

Why would anyone not want to bring OCTA technology into his or her practice? Aside from the minor difficulties we first encountered when trying out OCT in our practice, there are real barriers that should be acknowledged.

The primary barrier to any such upgrade is cost and a lack of increased reimbursement for use of a new imaging modality. Physicians are not paid any more for OCTA than for traditional OCT, despite the additional time required and the cost of the technology. That being said, compared with other similar upgrades to existing imaging technologies, OCTA is relatively affordable, assuming your equipment is reasonably current. In fact, upgrading a compatible HD-OCT 5000 to perform OCTA can be accomplished for less than $20,000, and that price is falling as competitors’ OCTA systems enter the market.

From a clinical perspective, there are a handful of downsides to adopting OCTA. The most obvious is the fact that OCTA is a “static” imaging technique, whereas FA is dynamic. Leakage seen during angiography can help identify damaged vasculature and provide a tremendous amount of information in conditions such as vasculitis and diabetic retinopathy. Interestingly, some microaneurysms that can be seen clinically and on traditional FA are not visualized on OCTA. Clinicians and scientists are trying to reconcile what this may mean clinically.

Another clinical limitation is the field of view with OCTA. Currently, most spectral-domain OCT systems have a maximum field of view of around 8 mm x 8 mm. This allows imaging of the macular area, but it does not quite reach to the arcades. Eccentric imaging and montaging of images is possible using programs such as Adobe Photoshop, but it requires considerable effort and is not feasible beyond the occasional great case study or image for presentation.

LOOKING AHEAD TO EXCITING IMPLICATIONS

What does the future hold for OCTA? It does not take much exposure to OCTA to realize that we are just scratching the surface as far as its capabilities and applications. Innovations will continue to push this technology into the mainstream. The primary driver of this technology is likely to be swept-source imaging, which produces greater scan depth and width than time-domain or spectral domain imaging. With just one image, it will be possible to obtain a detailed look at the vitreous all the way to the sclera with a wide field of view (possibly up to 90˚ or 20 mm x 20 mm).

When one considers the combination of swept-source imaging capabilities with perfusion mapping and comparative analysis, it is not unreasonable to foresee a time when physicians will have access to detailed cross-sectional and en face angiograms of the retina before seeing each patient in the retina clinic. Even more remarkable, obtaining this type of image would not disrupt the workflow of the clinic but might actually improve the flow, if OCTA marginalizes traditional FA.

If you weigh the pros and cons of incorporating OCTA into your practice and decide that it would be a good fit, given everything we currently know about the technology, should you upgrade now? This depends on the type of person you are and the philosophy of your practice regarding new technology. If you embrace new technology, you might enjoy the unique benefits of OCTA now. If you are more conservative when it comes to investing in new technology, you probably will not use it enough to warrant the purchase.

Whatever you decide, this technology is likely to have a place in the retina practice of tomorrow, and I look forward to being a part of its future.

An Interview With John Pollack, MD

Getting Specific About 3-D Visualization