In a phase 3 clinical trial, 58% of patients with nonproliferative diabetic retinopathy (NPDR) treated with aflibercept (Eylea; Regeneron) experienced a two-step or greater improvement in Diabetic Retinopathy Severity Score (DRSS) after 6 months of treatment, the drug’s maker announced in a press release. By contrast, 6% of patients receiving sham injection achieved that level of improvement (P < .0001).

The ongoing PANORAMA trial thus met its 6-month primary endpoint, and the company says it plans to use this data in an application later this year to the US Food and Drug Administration (FDA) to expand the biologic’s indications.

The 2-year phase 3 trial enrolled patients with moderately severe to severe NPDR with no diabetic macular edema. Patients were randomly assigned to one of two treatment arms (receiving either three or five initial monthly doses followed by 8-week dosing) or sham treatment. The trial has two primary endpoints, the 24-week assessment reported here and a second assessment at 1 year. Both assess the proportion of patients who experience improvement in DRSS from baseline.

In Mice, Immune Cells in Retina Can Regenerate 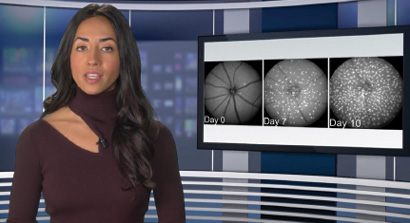 Immune cells in the mouse retina can spontaneously regenerate and reorganize themselves after being nearly eliminated, researchers at the National Institute of Health reported.1 These findings could help to develop therapies for controlling inflammation and slowing the progression of age-related macular degeneration (AMD) and inherited retinal diseases such as retinitis pigmentosa in humans, the researchers suggested.

Microglia are immune cells that help to maintain the health and function of retinal neurons. When the retina is injured, microglia migrate to the site of injury and help to clear unhealthy cells. Microglia have been shown to repopulate in the brain after ablation, but the function of these repopulated microglia has not been determined.

Using in vivo imaging techniques in the adult mouse retina, the study authors determined that repopulation started from residual microglia proliferating in the central retina and then spread cetrifugally to recapitulate previous microglial distribution. The repopulated cells had all the normal functions of undamaged microglia, including responding to retinal injury and maintaining retinal structure and function.

Adding oral zeaxanthin supplementation to a triple treatment for neovascular AMD improved visual outcomes and decreased the incidence of wet AMD development in fellow eyes, a randomized clinical study found.1 Addition of the supplement to the therapy regimen is highly cost-effective, the study’s authors said; it increased cost by only pennies per year, but resulted in a gain of 0.2 quality-adjusted life-years.

The authors had previously studied the addition of oral zeaxanthin to a triple therapy regimen of intravitreal bevacizumab (Avastin; Genentech), intravitreal corticosteroids, and photodynamic therapy with verteporfin (Visudyne; Bausch + Lomb) and noted that it was relatively effective and cost-effective. They undertook the randomized trial to confirm their earlier findings.

The 2-year triple-blinded trial enrolled 144 patients and randomly assigned them to the triple therapy (TT) or to the same regimen plus 20 mg daily oral zeaxanthin (TTZ). They modeled the 2-year results out to the 11-year life expectancy of the average participant.

Projected out to 11 years, the incremental cost of TTZ over TT was only $30 per quality-adjusted life-year, which the study authors called “remarkably low.” 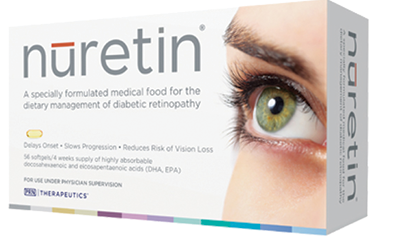 A purified triglyceride form omega-3 supplementation is now available from PRN Therapeutics, the company announced in a press release. The product, nu–retin, provides 1200 mg of EPA and DHA in a 1:5 ratio. Nu–retin is formulated to reduce the risk of and slow the progression to diabetic retinopathy, according to the company. Nu–retin is available to patient’s only through a doctor’s recommendation and is delivered directly by PRN Therapeutics. The company is providing webinars and other educational materials to encourage patients to access nu–retin.

Single-port cutters cut only in the forward direction, the company explained in a press release. The Bi-Blade cutters cut both forward and backward, making two cuts per cycle. With this feature, the company’s vitrector can now achieve effective speeds of 15,000 cpm, increasing flow efficiency and improving control compared to earlier guillotine cutters. The design also allows a more consistent flow rate and reduces retinal traction, according to the company. 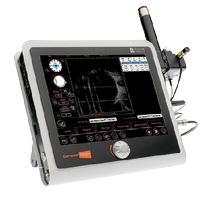 The biopharmaceutical company pSivida announced in March that it is acquiring Icon Bioscience and is changing its name to EyePoint Pharmaceuticals. The rebranded company also announced that it will receive an equity investment of up to approximately $60 million from Essex Woodlands Healthcare Partners, a growth equity firm, and $20 million in debt financing from another firm, SWK Holdings.

Icon’s dexamethasone intraocular suspension 9% (Dexycu) was approved by the FDA in February for the treatment of inflammation associated with cataract surgery. In March, the FDA accepted pSivida’s new drug application for its Durasert insert for treatment of noninfectious posterior segment uveitis. The latter will be subject to standard review, with a Prescription Drug User Fee Act action date of November 5.

Thus the newly branded company projects that it could have two products ready to launch in the United States in the first half of 2019, following scale-up of commercial supplies.

For decades, drug compounding has played a crucial role in effective health care delivery. Compounding pharmacists can tailor drugs to a specific patient’s needs by altering dosage concentrations or routes of administration. Unfortunately, poor compounding of drugs can lead to significant ramifications for patients. In 2012, a deadly fungal meningitis outbreak occurred due to contaminated drugs distributed from a compounding pharmacy in Massachusetts.1 In response to the outbreak, Congress sought to craft legislation that would improve federal regulatory oversight of compounding pharmacies.

In 2013, Congress passed the Drug Quality and Security Act (DQSA), creating a new regulatory structure for compounding pharmacies.2 The law created a new class of compounding pharmacies called “outsourcing facilities:” large-scale compounders registered with the US Food and Drug Administration (FDA) and subject to federal safety and sterility standards. Traditional compounding pharmacies, which compound for individually identified patients, would remain under the oversight of the states.

Since the passage of DQSA, the American Academy of Ophthalmology (AAO) has worked to ensure that access to safe and effective compounded and repackaged drugs is not hindered by the FDA’s reform efforts. A 2015 draft of policy guidance on repackaged biologics prompted significant concern due to policy language that would dramatically limit beyond-use dates for drugs such as bevacizumab (Avastin; Genentech). In 2015, the AAO warned the FDA that the policy would severely limit or completely eliminate patient access to repackaged bevacizumab, which is frequently prescribed for sight-threatening eye diseases such as age-related macular degeneration.3 After years of advocacy efforts, an improved policy guidance was released this year.4

Additionally, DQSA implementation efforts have affected where ophthalmol-ogists can acquire compounded or repackaged drugs for office use. In December 2016, the FDA released a final guidance that banned the distribution of compounded drugs from traditional compounding pharmacies without a patient-specific prescription.5 Along with other physician organizations, the AAO believes that this guidance threatens physician access to compounded drugs for office use. These concerns stem from ophthalmologists’ reliance on traditional compounding pharmacies to provide small-quantity orders of compounded and repackaged drugs, which are unavailable from outsourcing facilities that typically compound in bulk.

In response to stakeholder concerns about the law, the House Energy and Commerce Health Subcommittee held a hearing in January for an update on its implementation.6 The committee heard perspectives from FDA Commissioner Scott Gottlieb, MD, who expressed the agency’s desire to have traditional compounding pharmacies register as outsourcing facilities and thus be subject to increased manufacturing standards. He also stated that the agency would continue to seek balanced approaches.

“We must preserve access to compounded drugs for patients whose medical needs cannot be met by approved drugs while also taking steps to conduct appropriate oversight of compounding,” Dr. Gottlieb said.

On the hearing’s stakeholder panel, AAO President-elect George A. Williams, MD, testified on behalf of the AAO. In his testimony he outlined concerns with DQSA implementation and emphasized the importance of these treatments to ophthalmic patients. Although he expressed the AAO’s support for efforts by Congress and the FDA to improve the safety of compounded and repackaged drugs, he also highlighted the potential pitfalls of heavy-handed regulation.

“Regulatory policy in this arena can become restrictive and, in turn, negatively impact [physicians’] ability to properly and effectively treat our patients,” Dr. Williams said. “It is important that, as implementation efforts move forward, [the] FDA strives to find more balanced approaches.”

5. US Department of Health and Human Services. Prescription Requirement Under Section 503A of the Federal Food, Drug, and Cosmetic Act: Guidance for Industry. December 2016. www.fda.gov/downloads/Drugs/GuidanceComplianceRegulatoryInformation/Guidances/UCM496286.pdf. Accessed March 27, 2018.

6. Hearing Before the US House of Representatives Energy and Commerce Health Subcommittee, 115th Cong, (2018) (testimony of George A. Williams, MD, President-elect, American Academy of Ophthalmology).

ERM With Good Vision: Should We Operate?