The sixth annual meeting of the Vit-Buckle Society (VBS) took place March 22 to March 24, 2018, in Miami, Florida. The weather was seasonable, there was a great turnout, and everyone brought a healthy dose of enthusiasm. In this and the next two installments of Retina Today’s Meeting Minutes, we’ll share highlights from eight talks that we personally selected from this meeting. These summaries will come from surgical retina fellows who were in attendance at VBS. In the text that follows, Mohsin Ali, MD, and Mircea N. Coca, MD, PhD, recap two featured sessions: the VBS Keynote Speaker and the VBS Lifetime Mentorship Award. 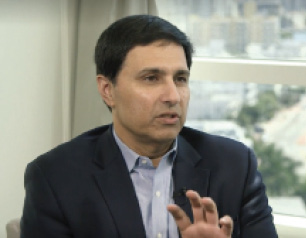 THE PERSON BEHIND THE ACHIEVEMENTS

This session was unique and refreshing. It shed light on Dr. Humayun as a person and exposed dimensions of his personality and accomplishments that are not readily apparent in a typical scientific presentation. While we learned about the medical innovations Dr. Humayun has developed to improve patient care, we also learned about his early life, his inspirations, and his life outside of science.

Dr. Humayun was born in Islamabad, Pakistan, to a family with strong ties to public service. His paternal grandfather was the governor of a province and an ambassador, and his maternal grandfather was the dean of a medical school and a personal physician to the founder of Pakistan, Muhammad Ali Jinnah. Dr. Humayun immigrated to the United States at the age of 7. He reminisced with Dr. Lakhanpal about the unique challenges of immigrating to the United States as a child, hinting at both the humorous perceptions of a young child in new surroundings and the real struggles that come with adjusting to a new life in an unfamiliar culture.

Dr. Humayun completed his undergraduate education at Georgetown University, where he played tennis, a hobby he still enjoys. He admitted that while in college he was described as an adrenaline junkie and an adventurer, and he still likes snowboarding, windsurfing, and kitesurfing. He also enjoys music and occasionally plays the drums.

CREDIT WHERE IT’S DUE

Dr. Humayun spoke of his inspiration to pursue a career in ophthalmology. He recalled his grandmother’s experience with diabetic macular edema and how disheartening it was to watch her lose her vision and her lust and vigor for life. This was one of the factors that led him to switch from pursuing neurosurgery to choosing ophthalmology. In medical school, Dr. Humayun witnessed a neurosurgeon electrically stimulating the occipital lobe of a patient, causing him to perceive flashes of light, and he said that this planted the seed behind his future innovations in electric stimulation of the retina.

Of his many accolades, Dr. Humayun has been awarded the National Medal of Science and Technology by President Barack Obama for his pioneering efforts in the development of the Argus II Retinal Prosthesis System (Second Sight). He has recently been involved in stem cell research and in the development of a “synthetic Bruch membrane” and a hydrogel sealant that can stabilize open globe injuries upon application and later be reversed with room temperature saline.

For the many young vitreoretinal surgeons and vitreoretinal surgery fellows in the audience at VBS, Dr. Humayun’s story was inspiring, revealing to us that one can excel at the highest levels as a clinician, researcher, and mentor while also living a full and enjoyable personal life. 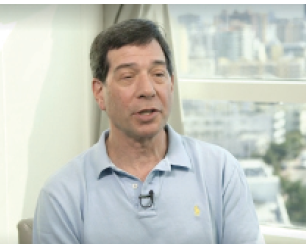 Each year, the VBS Lifetime Mentorship Award is given to an individual who has made significant contributions to the field of retina through the education and mentorship of retina specialists. This year, David Eichenbaum, MD, presented the award to Jay S. Duker, MD.

In his VBS Lifetime Mentorship Lecture, “A Reappraisal of Macular Hole Classification,” Dr. Duker discussed the new classification paradigm of vitreomacular diseases based on optical coherence tomography (OCT) imaging pertaining to full thickness macular holes. He talked about how a staging and classification system evolves from being descriptive (identifying patterns) to being predictive (connecting observed patterns with outcomes). “Over time, a classification system matures to become simple, objective, quantitative, reproducible, predictive of therapeutic outcomes, and applicable in daily practice or clinical studies,” he explained.

Dr. Duker noted that J. Donald M. Gass, MD, devised the previous macular hole classification based on clinical examination before the advent of spectral-domain OCT or vitrectomy.1 “OCT imaging demonstrated that full thickness macular holes (FTMH) are caused by an oblique vitreomacular traction (VMT), which contradicts Dr. Gass’s tangential traction hypothesis,” Dr. Duker remarked. In fact, Dr. Duker explained, a drawbridge theory, mentioned first by Paul Tornambe, MD, in 2003, in which a partial perifoveal posterior vitreous detachment (PVD) with vitreomacular adhesion (VMA) causing traction on the retinal tissue, is a better description of the pathogenesis of a FTMH. “Using OCT imaging to examine and monitor the progression from VMT to macular holes, we learned that some eyes skip stages described by Dr. Gass, that stage 4 macular holes smaller than 400 µm can have PVDs, and that PVD lacks any predictive value regarding surgical outcome,” Dr. Duker said.

Dr. Duker explained that in 2012 an international panel was convened to develop a new classification system for diseases of the vitreomacular interface based on OCT imaging. The new system is strictly anatomic, without reference to reported symptoms. “It uses three main elements to classify macular holes: size of the defect (<250 µm, 250-400 µm, >400 µm), presence of VMT, and primary versus secondary hole,” Dr. Duker said. “Clinical studies suggest that spontaneous closure occurs only in primary holes smaller than 250 µm and that holes smaller than 400 µm have a high surgical success for closure with complete removal of residual hyaloid.” Dr. Duker also noted that holes smaller than 400 µm may not benefit from internal limiting membrane peeling, but that larger holes do benefit from peeling the internal limiting membrane and that holes smaller than 250 µm are most responsive to pharmacologic vitreolysis. “Primary holes result from the progression of VMA to VMT, whereas secondary holes have other causes without preexisting or concurrent VMT (eg, trauma, high myopia, macular schisis, epiretinal membrane, neovascularization, scleral buckle),” Dr. Duker said. He suggested that the term idiopathic be eliminated from our vocabulary, as primary FTMHs are known to be caused by VMT.

Intervention and Education in Jamaica and Tanzania

Involving Patients in the Care of Their AMD

Business Matters: A New Direction for Maintenance of Certification

Editorially independent content supported with advertising by Genentech and Regeneron