French researchers and clinicians have contributed greatly to the literature on this emerging imaging modality.

The introduction of OCT angiography (OCTA) in France has generated great interest among retina researchers and clinicians. Most centers specializing in retina wasted no time purchasing OCTA devices, and French teams have published many articles on the topic. In this article, we describe the impact of OCTA on daily retina practice in France by reviewing a panorama of OCTA applications in different indications, summarizing key publications of French teams working with this technology, and presenting questions to several internationally recognized French experts in OCTA (see Ask the Experts).

The advent of OCTA has changed our practice in the initial workup of patients with exudative age-related macular degeneration (AMD), resulting in a decrease in the number of fluorescein angiography (FA) and indocyanine green angiography (ICGA) examinations carried out (Figure 1). In our center, the figures speak for themselves. Performing an examination with dye injection used to be the rule in the initial assessment of choroidal neovascularization (CNV). Now, the indications for this type of examination have decreased by two-thirds.

Current practice is to first perform structural OCT combined with OCTA in patients with suspected CNV. When structural OCT features are consistent with CNV and OCTA identifies a neovascular network, then clinicians perform only retinal photography. However, if there is still doubt, FA and/or ICGA are performed.1 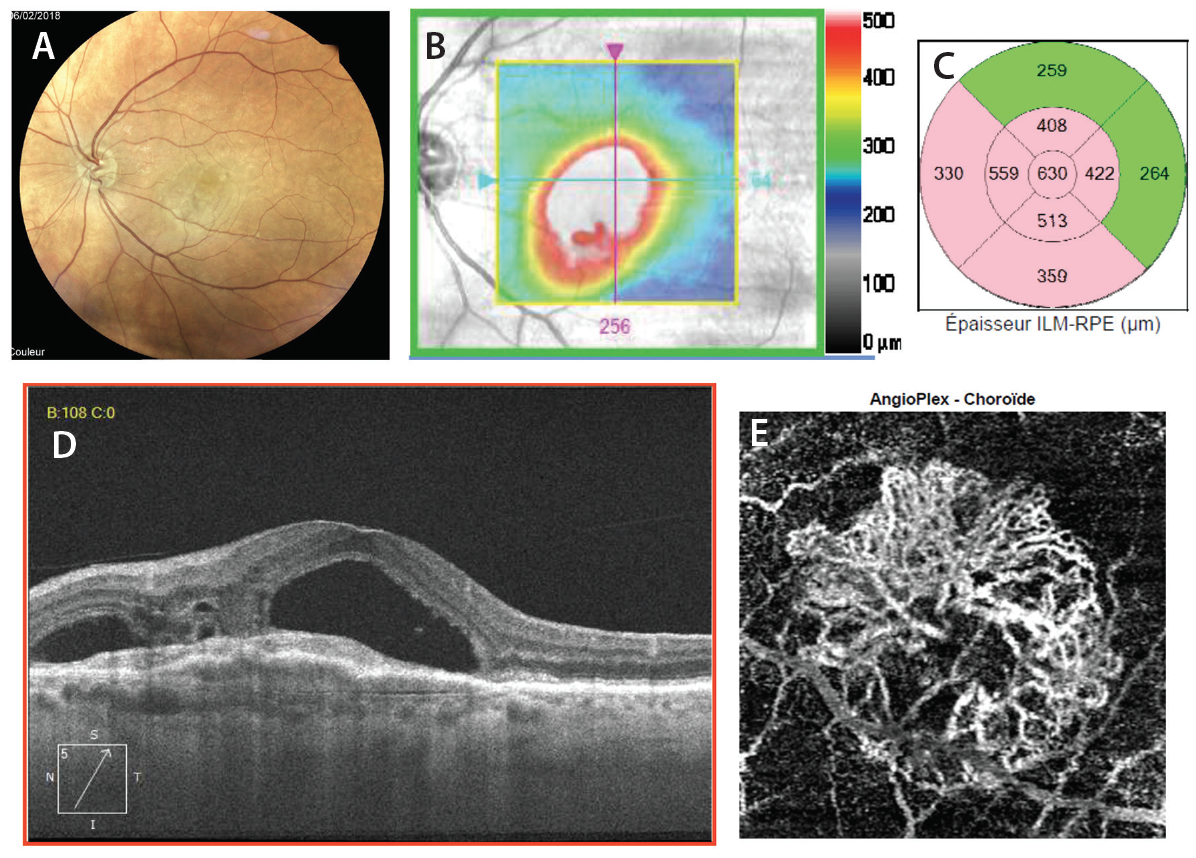 Figure 1. Patient with neovascular AMD in the left eye. Retinal photography shows the disappearance of the foveal reflex (A). Macular mapping shows retinal thickening in the area of the exudation: color presentation (B) and quantitative presentation (C). B-scan shows a bridge arch-shaped exudation above fibrosis (D). OCTA shows a CNV pattern (E).

What is the potential for ultra-widefield OCTA in the near future?

Jean-François Korobelnik, MD, University Hospital, Bordeaux, France: Large patterns of OCTA and automatic montage of several images are now available features on some units. Ultra-widefield OCTA provides information on the perfusion of the retina outside the arcades. This feature is helpful to evaluate the status of DR without injecting a dye. It is also helpful in retinal vein occlusion, as the clinician can evaluate both perfusion and the presence or absence or preretinal new vessels. It must be associated with color fundus photography to allow full evaluation of the retina.

Does the availability of OCTA decrease the need for FA in AMD?

Salomon Yves Cohen, MD, PhD, Université Paris-Est Créteil, Paris, France: There is a natural trend in the medical world to choose noninvasive over invasive examinations. OCTA is an important step in this direction. In exudative AMD, OCTA helps to image and confirm the diagnosis of CNV, but it is also a major tool in other diseases such as macular telangiectasia. In France, there is so far not enough evidence to support retreatment based on OCTA features, and the as-needed, or PRN, approach continues to be used, based only on signs of exudation as visualized on structural OCT.

What is the contribution of OCTA in the evaluation of posterior uveitis and other inflammatory diseases?

Bahram Bodaghi, MD, PhD, FEBO, Pierre and Marie Curie University, Paris, France: OCTA has transformed our approach to posterior and panuveitis of various origins. Although more experience is needed, this noninvasive tool allows us to better evaluate the inflammatory and infectious lesions threatening visual function. Choroidal new vessels are probably the main target of this technology. Their activity under anti-VEGF and antiinflammatory treatment is better monitored, although certain criteria must be further explored in large series of patients. It must be emphasized, however, that OCTA is part of a global multimodal imaging strategy.

How do you use OCTA in macular edema? What information does it provide in daily practice?

Ramin Tadayoni, MD, PhD, Hôpital Lariboisière, Paris, France: OCTA is often part of my OCT image acquisition protocol as it is noninvasive and now fast. In macular edema, it gives me additional information that can be useful. Decorrelation signals in cystic spaces may be associated with slower improvement. A severely nonperfused macula warns us to be cautious about the visual prognosis and even more careful about the periphery. Widefield OCTA, which I request in selected cases, helps to evaluate peripheral nonperfusion, although it still must be validated in comparison with FA.

In practice, for type 1 and 2 CNV, the diagnostic sensitivity of OCT is high, allowing clinicians to make a diagnosis with no need for dye injection in most cases. In type 2 CNV, a sensitivity of 100% has been reported in some series.2 In type 1 CNV, the sensitivity is close to 90%. In retinal angiomatous proliferation (RAP, also known as type 3 CNV), diagnosis may be more challenging.3 Indeed, the neovascular tuft, classically described within the external retinal layers, is not always easy to identify, although in a recent series using new-generation OCTA devices, the detection rate was high. Similarly, the sensitivity of OCTA to identify CNV in vascularized pigment epithelium detachment or polypoidal choroidal vasculopathy is lower than in other types of CNV. Detection is enhanced when the user switches from automatic segmentation to manual segmentation.1-4

To date, we do not consider OCTA alone a sufficient tool to make a diagnosis of CNV recurrence. There is no consensus in the literature regarding activity features in the absence of neovascular exudation, and CNV growth is not a retreatment criterion for us.

Depending on the type of CNV, the sensitivity of OCTA may vary: It is very high in types 1 and 2 CNV in AMD, but lower in CNV complicating high myopia. In highly myopic eyes, artifacts are more frequent, and the small size of CNV makes them more difficult to detect.4

In pachychoroid associated with FIPED, Hage et al showed the utility of OCTA for identifying CNV.6 Although the possible occurrence of type 1 CNV complicating the course of chronic CSC should not be ignored, these authors said, all cases of FIPED should not be mistaken for active CNV and systematically treated with anti-VEGF therapy. OCTA appears to be useful for making this determination.

OCTA provides structural and topographic analysis of microvascular abnormalities associated with diabetic retinopathy (DR), including microaneurysms and intraretinal microvascular abnormalities. Moreover, it identifies and characterizes DR complications such as diabetic macular edema (DME) and preretinal neovascularization.8,9 OCTA can also help clinicians to better understand some of the mechanisms associated with DME formation.10

In DR, OCTA provides excellent qualitative and quantitative assessment of macular perfusion (Figure 2). This imaging modality allows users to analyze the plexuses at different depths. It also requires no fluorescein injection and therefore avoids the leakage that can complicate the analysis of vascular details on FA. OCTA software provides multiple quantitative indicators for characterizing macular perfusion. Many studies have highlighted the relationships between macular and peripheral perfusion.11 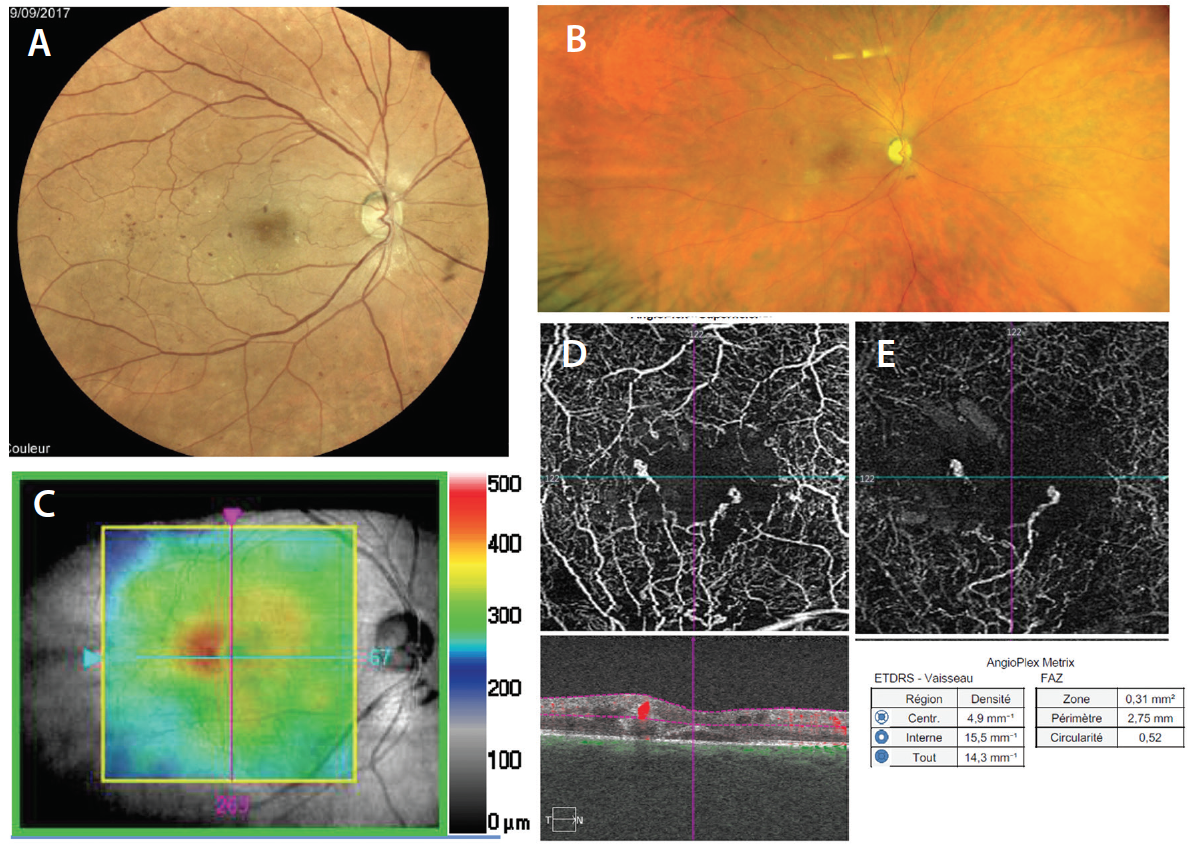 Is there a significant enough correlation between macular ischemia and peripheral DR so that OCTA can replace the subjective assessment of peripheral perfusion, for example with ETDRS classification of DR; or at least can OCTA help to complete this assessment by defining risk phenotypes? Most studies agree that there is a relationship between macular perfusion and stage of DR.12,13

In OCTA devices from several manufacturers, foveal avascular zone (FAZ) dimension and vascular density measurements can be used to evaluate macular perfusion. In patients with diabetes, analysis of the FAZ shows a low correlation with the stage of DR. Vascular density is rather well correlated with DR stage, although there is a discrepancy between studies regarding the best index to be used to assess vascular density.9

To date, however, these OCTA tools cannot replace the standardized methods recommended by ETDRS classification, especially because OCTA measurements do not provide specific thresholds for each stage of ETDRS classification. Improvements in this area by researchers and device manufacturers are therefore needed before clinicians will eventually be able to classify, diagnose, and monitor DR with OCTA without performing a fundus evaluation.

OCTA could also be used as a prognostic indicator of VA. As recently demonstrated by Dupas et al in patients with type 1 diabetes without DME but with severe nonproliferative or proliferative DR, VA may be associated with the degree of capillary loss in the deep vascular complex (DVC).14

OCTA can be used in vein occlusion to characterize macular changes induced by the occlusion. Glacet-Bernard et al showed a significant correlation between macular vascular density as quantified automatically on OCTA and peripheral nonperfusion seen on FA.11 Thus, OCTA could help to identify high-risk patients with retinal vein occlusion who might benefit from further evaluation with FA.

In macular telangiectasia (MacTel) type 1, which affects both the superficial vascular plexus and the DVC, OCTA was shown to be less effective than FA to document the telangiectasia. Conversely, in MacTel type 2, the vascular changes are mainly located in the deep vascular plexus (DVP) and are poorly imaged by FA. The temporal parafoveal DVP is the first area affected, characterized by the appearance of progressive capillary rarefaction and dilation and abnormal capillary anastomosis. Secondarily, abnormal dilated anastomoses are observed between the two plexuses.15 Finally, neovascular complications, which occur in about 15% of cases, have been shown to be more easily diagnosed with OCTA than with FA.4 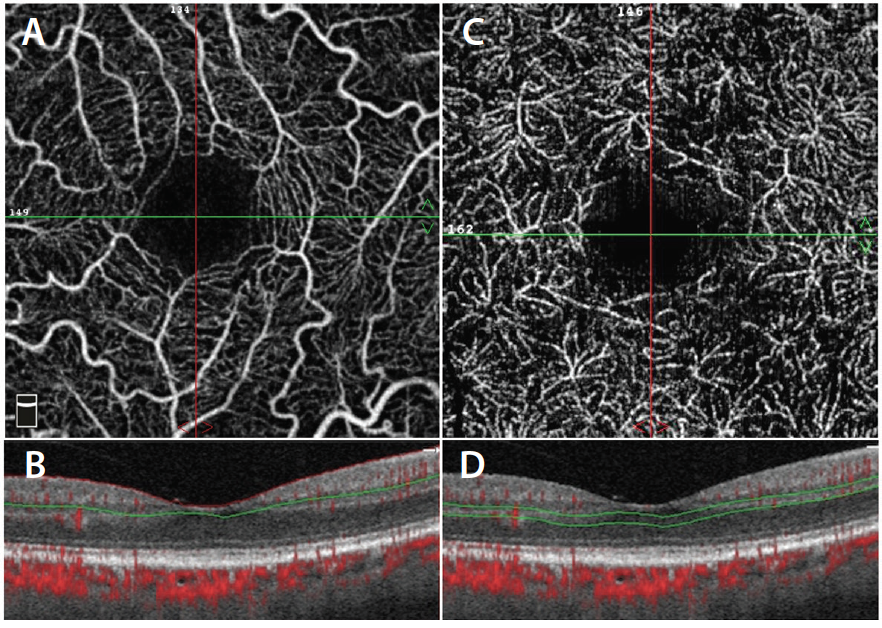 The deep retinal FAZ seems to be enlarged in eyes with noninfectious posterior uveitis, both in the presence and the absence of macular edema.

Multimodal imaging allows the characterization of macular lesions in multifocal choroiditis. The integration of OCTA in the multimodal approach appears to be useful for distinguishing neovascular lesions from inflammatory lesions. The combined findings of conventional imaging (ie, photography, OCT, FA, ICG) and OCTA demonstrate distinct features of inflammatory lesions and CNV in multifocal choroiditis, allowing the appropriate management of these sight-threatening lesions. However, OCTA alone cannot distinguish active and inactive CNV, and it should be integrated into a multimodal approach.18

AN IMPORTANT TOOL WITH ADDITIONAL POTENTIAL

Progress is still needed with OCTA software and hardware to reduce the frequency of artifacts, improve the acquisition process, enlarge exploration fields, and standardize procedures so that they will be less dependent on technicians. Nevertheless, despite its limitations, OCTA is now a valuable tool in the multimodal assessment of retinal diseases.

The experience of French researchers and clinicians at multiple centers, as outlined above, has contributed to the body of knowledge on this relatively new imaging modality, and we see no reason why these contributions will not continue as OCTA is integrated into routine clinical retina care.