New Ways to Image the Choroid

Novel imaging modalities allow us to view and describe the choroid in ways that were never before possible.

The advent of new imaging technologies including high-penetration OCT, OCT angiography (OCTA), and adaptive optics OCTA (AO-OCTA) has enabled better understanding and more detailed analysis of the choroidal layer.1,2 The information provided by these imaging modalities has made it possible for clinicians to describe multiple new disease entities.3-6 This article reviews these recent technological advancements and some of the disease entities that have recently been described thanks to these developments.

IMAGING THE CHOROID: LET US COUNT THE WAYS

When it comes to acquiring information about the choroid, the retina specialist has quite a few imaging options from which to choose.

OCT has many applications in retina, but the development by Spaide and others of enhanced-depth imaging OCT (EDI-OCT) a decade ago has allowed imaging of deeper retinal layers, including the choroid. EDI-OCT and swept-source OCT (SS-OCT) are particularly helpful if one is looking for evidence of a large choroidal vessel (Haller layer), medium choroidal vessel (Sattler layer), and/or a layer of choriocapillaries with clear distinction of the choroid’s outer and inner boundaries.1,2 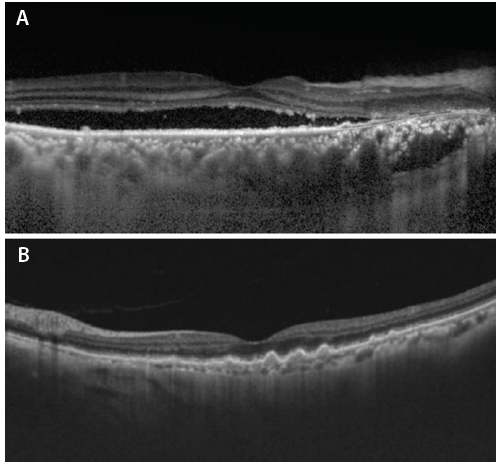 Choroidal thickness varies among disease states, and the choroid becomes thinner with increasing age and axial length.7 Choroidal thickness is increased in central serous chorioretinopathy (CSCR), polypoidal choroidal vasculopathy (PCV), and Vogt-Koyanagi-Harada syndrome but is decreased in age-related macular degeneration (AMD) (Figure 1).8-10 Choroidal thickness decreases from the macular area to the periphery and is at its maximum subfoveally and in the superior quadrant.11

Improved binarization techniques have led to better demarcation between dark (luminal) and bright (stromal or interstitial) areas of the choroid.15,16 The ratio of dark areas to total choroidal area is representative of the area occupied by choroidal vessels: This is termed choroidal vascularity index, and it has been studied in a normal population and in various disorders including CSCR, AMD, Vogt-Koyanagi-Harada syndrome, diabetic retinopathy (DR), and tubercular multifocal serpiginoid choroiditis.17-21 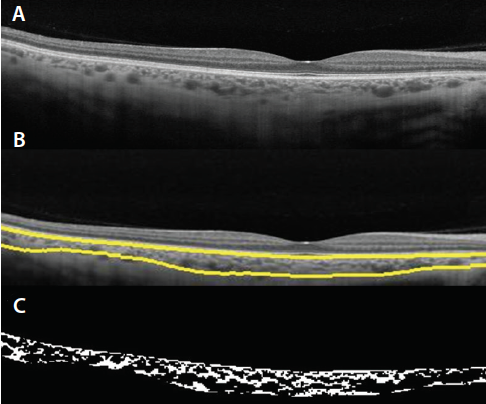 Figure 2. Automated choroidal segmentation (A and B) and binarization (C) of an SS-OCT B-scan of a normal eye.

Automated choroidal segmentation and vessel layer thickness analysis provides information on specific choroidal layers in normal eyes and in various disease conditions. For instance, significant thinning of medium choroidal vessels has been noted in nonpathologic myopic eyes.22 Segmentation involves identification of the choroidal inner boundary just below the highly reflective retinal pigment epithelium (RPE) band and the choroidal outer boundary (Figures 2A and 2B). Choroidal outer boundary delineation is difficult because of the absence of any natural division between choroid and sclera.13 Automated segmentation techniques have better reproducibility and are less time-consuming than manual methods.23,24 Automated Haller and Sattler layer segmentation provides further details about large and medium choroidal vessels, respectively. It is accomplished by binarization of choroid into stromal and luminal components (Figure 2C), identification of choroidal vessels, and finally, delineation of the vessels into large and medium.24,25

A coronal view of choroidal vessels, showing their size and distribution patterns, can be obtained with en face choroidal imaging.16 Multiple choroidal anomalies, such as polyps and branching vascular networks in PCV, focal or diffuse dilatation of choroidal vessels in CSCR, or reduced vessel density in AMD, can be identified using this modality.26-28 En face OCT scans can also be used to identify choroidal neovascularization (CNV), especially the occult type, and to monitor response to treatment based on changes in lesion size or vascularity.28

3D reconstruction was difficult to accomplish initially because OCT line scans provide details in vertical fashion only at specified points, with no information about the intervening areas. Recreating 3D models requires the use of interpolation techniques to provide details about the missing data29 in order to produce additional information about CNV, drusen, and changes in choroidal vasculature in eyes with CSCR and/or PCV.30

Widefield imaging enables us to study the perimacular and peripheral choroid at the same level of detail as the macular choroid.31-33 Widefield choroidal thickness, choroidal vascularity, and choroidal layer analysis can provide clinicians with details of the peripheral choroid in normal eyes and in eyes with pathologic lesions that are better than what was possible previously.31,32

OCTA is a noninvasive test that can be helpful in identifying CNV and monitoring its progression or regression after treatment. Quiescent CNV lesions located below the RPE in eyes with AMD display no leakage on standard fluorescein angiography (FA) and no subretinal or intraretinal fluid on OCT.34,35 A small number of these eyes may develop exudation with time, necessitating treatment.36 Using en face OCTA, automated quantification of CNV can be accomplished with good reproducibility, comparable to that of manual delineation.37,38 Choroidal voids denoted on OCTA indicate areas of reduced blood flow in the choriocapillaris. These voids can be present in various degenerative chorioretinal disorders including high myopia, retinitis pigmentosa (RP), Stargardt disease, and DR (Figure 3).39-42 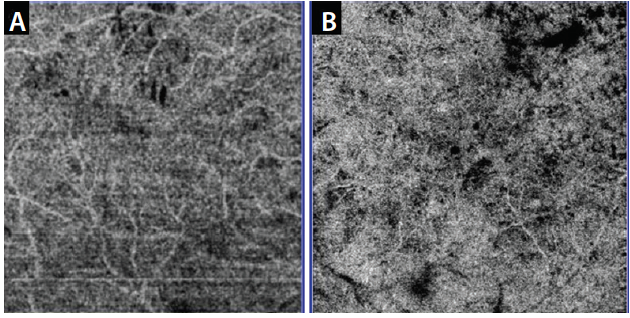 AO-OCTA provides a detailed view of the choriocapillaris simulating histologic sections, along with morphometric parameters including RPE-choriocapillaris depth separation and capillary density, diameter, and length per unit area.43

Numerous new disease entities and clinical anomalies have been described thanks to the information obtained from the novel imaging techniques discussed above. 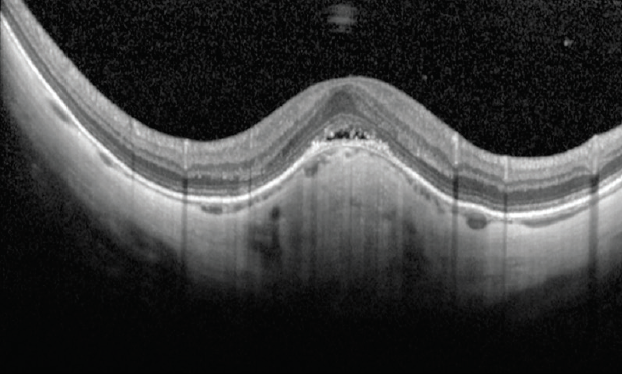 Figure 4. This SS-OCT B-scan passing through the vertical meridian of a patient with high myopia reveals the presence of a posterior staphyloma. Dome-shaped maculopathy with associated subretinal fluid and thin choroid can also be seen.

Dome-shaped maculopathy (DSM) and staphyloma-induced serous maculopathy (SIM) are distinct choroidal contour-related anomalies in which there is an inward bulge of choroid at the macula or the edge of a staphyloma.44-46 DSM is seen most commonly in patients with high myopia and tends to be associated with chronic subretinal fluid (SRF) that is not amenable to treatment with anti-VEGF therapy (Figure 4).44 SIM is similar in pathology to DSM but is seen at the borders of a staphyloma and may or may not be associated with SRF.46

Age-related choroidal atrophy is a term coined by Richard F. Spaide, MD, to describe eyes with significant choroidal thinning. Most of these eyes had only minimal retinal or RPE changes and therefore did not qualify as having AMD. However, the choroid was significantly thinner in these eyes, which is representative of changes related to aging.3 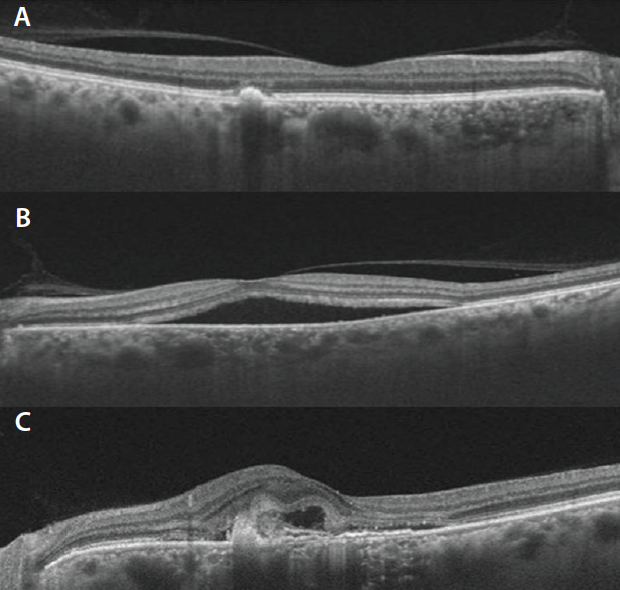 Disease entities with abnormally thickened choroid comprise the pachychoroid spectrum. These entities were described based on distinct clinical findings obtained through the use of EDI-OCT or SS-OCT imaging. They include pachychoroid pigment epitheliopathy (PPE), CSCR, pachychoroid neovasculopathy (PNV), and PCV (Figure 5).47 An interesting finding in these eyes is the presence of pachyvessels, which are characterized by a thickened Haller layer with compression of the Sattler layer and choriocapillaris.47

Focal choroidal excavation (FCE) is an idiopathic excavation of the macular choroid without the presence of posterior staphyloma or ectasia.6 Conforming FCE forms when the photoreceptor layer remains apposed to the RPE and extends within the concavity of FCE without
any hyporeflective space. Nonconforming FCE forms when the photoreceptor layer detaches from the RPE with the formation of a hyporeflective space.48,49

Drusen are extracellular hyaline excrescences between the RPE and Bruch membrane. They can be hard or soft. Subretinal drusenoid deposits, as the name suggests, are located above the RPE.50 Pachydrusen is a recently described variant of drusen seen in eyes with AMD and PCV. These deposits are associated with thickened choroid and have a different morphology and topographic location compared with soft drusen.4,51

Figure 6. Rendered infrared image (A) and SS-OCT scan (B) of a patient with thickened choroid and multiple hyperreflective foci in the choroid. Subretinal fluid, double layer sign, and notched pigment epithelial detachment can also be observed.

Choroidal hyperreflective foci have been described in many chorioretinal pathologies, including Stargardt disease, RP, and CSCR (Figure 6).52-54 The mechanism that has been proposed for their formation is the loss of photoreceptors, with migration of RPE cells within the choroid. The number of hyperreflective foci tends to increase with disease severity.52

Choroidal caverns is an OCT finding that has been described in patients with geographic atrophy in AMD. These findings appear as hyporeflective cavities with hyperreflective borders involving either the Haller or Sattler layer and with preserved choriocapillaris.55

Intrachoroidal cavitation (ICC) was initially described as a hyporeflective space in the peripapillary choroid of patients with high myopia, usually at the inferior border of the myopic conus.5,56 It is important to differentiate these lesions from pseudoperipapillary ICC, which are hyporeflective areas that correspond with a large choroidal vessel on fundus photography.57 Temporal ICC is characterized by larger size and, unlike peripapillary ICC, may not be localized to the margins of the disc.58 Whether temporal ICC and choroidal cleft are similar pathologies based on their clinical OCT appearance and location is a matter for further research.

HERE’S LOOKING AT YOU, CHOROID

The new ophthalmic imaging modalities described above have provided clinicians with better tools for understanding chorioretinal pathologies. However, unfilled spaces and gaps still remain. These imaging techniques do not yet provide the fine detail seen in a true histologic section.

The Future of Ocular Imaging?