A different way of looking into the posterior segment may come in handy.

• Endoscopy can be a useful tool in eyes with poor visualization on standard viewing platforms.

• Common indications for endoscopy include chronic hypotony secondary to anterior proliferative vitreoretinopathy and retinal detachment repair in the setting of compromised anterior segment visualization, among others.

The endoscope can visualize the ciliary processes, pars plana, and anterior retina without scleral depression, optimizing surgery on these areas without consequences such as peripheral lens aberration or alteration of normal anatomy (from scleral depression) that are commonly encountered during conventional vitrectomy.1

At our site, we use the Endo Optiks E2 endoscope platform (Beaver-Visitec International) for endoscopic vitrectomy. In most cases, we use a 23-gauge probe with a resolution of 10,000 pixels. When higher resolution is important, we use a larger 19-gauge probe that provides 17,000 pixels of resolution. These probes also include an integrated laser that can be controlled with a footpedal. The field of view varies with the size of the probe; the smaller-gauge probes provide a more confined field of view. The probes are fully autoclavable and reusable.

It is important to realize that visualization will be different from that with traditional microscopic visualization. When starting out with endoscopic vitrectomy, many surgeons will be frustrated with the decreased resolution of images, smaller field of view, and dimmer illumination of images compared with standard viewing. The probe often has to be held much closer to intraocular structures for adequate visualization, a contrast with the widefield illumination systems used in conventional vitrectomy. We recommend fine-tuning the scope’s focus on a surgical drape, a blue towel, or an item with printed words prior to inserting the probe in the eye.

Determining the correct orientation of images is critical. Because there is a camera in the endoscopy probe, rotating the probe causes the images themselves to rotate, leading to disorientation and increasing the risk of iatrogenic injury. To optimize orientation, we recommend orienting the probe outside the eye prior to insertion. We typically orient the image by focusing on the speculum, infusion line, and trocars prior to inserting the probe. After the probe is in the eye, we orient it by identifying the optic nerve first, then the macula, and then a peripheral landmark (either a cannula or inserted instrument). This three-point orientation then allows the surgeon to comfortably navigate during surgery. We repeat this orientation process each time we enter the globe.

During surgery, the surgeon must adapt to a lack of depth perception. This can be extremely challenging for young surgeons and trainees, and it increases the risk of iatrogenic complications. We suggest operating slowly and deliberately, always keeping instruments directly in endoscopic view when inserting them and while operating. Using the size of surrounding structures and the shadows they cast as clues may be helpful. Keeping the probe and instruments in a safe space in the center of the eye and away from the macula is critical, especially during core vitrectomy and when hemorrhage or inflammation precludes a good view of the retina.

One approach to gaining comfort with this technique is to insert the endoscope into the globe during routine surgical cases in which a normal view is present. This allows the surgeon to grow familiar with probe positioning without the pressure of relying on the probe as the only means of visualization for the case at hand.

The most common indication for endoscopic vitrectomy is poor posterior visualization. This commonly occurs in eyes with dense corneal edema, significant corneal scarring, lens opacification or positioning abnormalities, and other anterior segment pathologies. Often, these patients have vision-threatening retinal conditions, such as retinal detachment, that necessitate immediate vitreoretinal surgery before intervention in the anterior segment.2 The integrated laser probe in the endoscope can be critical in these cases for achieving good anterior laser; a separate lighted laser probe can also be inserted to achieve adequate retinopexy.

Severe endophthalmitis is a common indication for endoscopic vitrectomy.3,4 The view in eyes with severe endophthalmitis is often severely compromised due to the presence of pupillary membranes, synechiae, hypopyon, and fibrin. Dense vitritis can be safely debulked under endoscopic visualization. In these cases, it is important to keep the cutter in view at all times, moving slowly from anterior to posterior, as dense vitritis can significantly limit visualization of intraocular structures. Improved visualization is often achieved as the vitritis is slowly debulked, allowing greater mobility of the vitreous cutter and endoscope.

Visualization with endoscopy is useful for removing intraocular foreign bodies (IOFBs) in eyes with limited anterior visualization.5 The cornea or lens can be severely affected by the entry track of the IOFB, corneal sutures from primary repair, or the trauma itself. Using endoscopy, the IOFB can be visualized and safely removed. In the event that an anterior IOFB is embedded in the pars plana, standard vitrectomy with scleral depression may increase the risk of expulsion of intraocular contents. Endoscopic vitrectomy allows safe and swift removal of IOFBs in such cases. 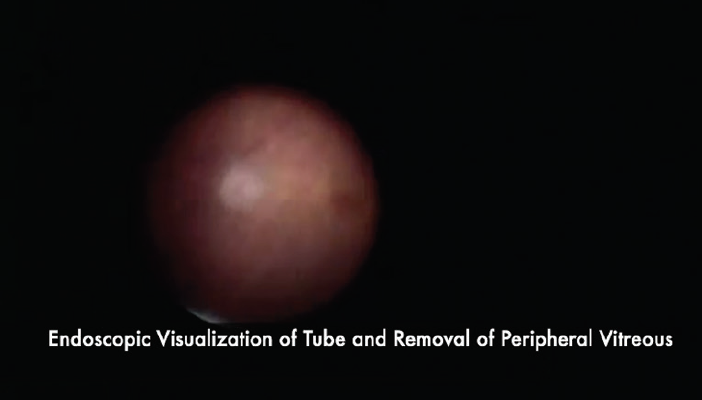 During placement of a glaucoma drainage tube in the pars plana, removal of anterior vitreous is critical to ensure that the tube remains patent with good egress of fluid (Video 1). However, scleral depression over the area where the tube is placed can distort the normal anatomic orientation. Endoscopic visualization may assist with full removal of the anterior vitreous and confirmation of correct tube placement in the pars plana. Although scleral depression may be helpful during conventional vitrectomy, the true anatomic position of the tube can be better assessed without scleral depression. In addition, residual anterior vitreous is often better identified with endoscopy than with conventional viewing, especially if it sits behind the iris. 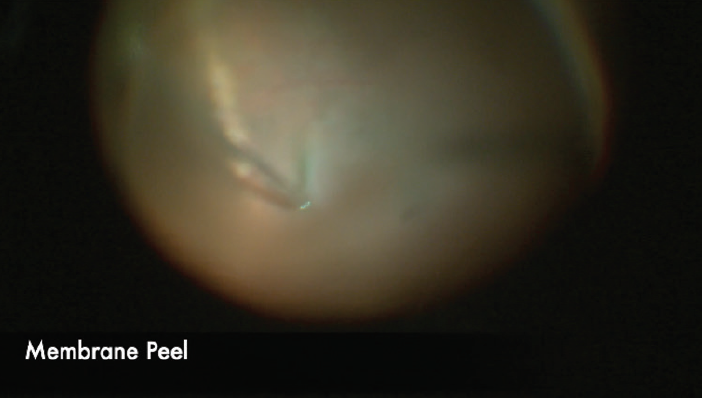 In eyes with anterior proliferative vitreoretinopathy, dense membranes can form on the anterior pars plana and ciliary processes, leading to hypotony. The endoscope allows direct visualization and manipulation in these far anterior areas to ensure optimal membrane dissection (Video 2).6

A helpful tool for the vitreoretinal surgeon is endocyclophotocoagulation. This method of ablation of the ciliary processes can be a safe and effective way to decrease the IOP in patients with elevated IOP whose disease has not responded adequately to medical therapy. It can be especially helpful for patients contraindicated for filtering surgery due to the presence of silicone oil or extensive ocular pathology. Using the integrated laser probe, direct laser can be applied to the ciliary process, typically for 180° to 270°.

In the setting of uveitis-glaucoma-hyphema syndrome caused by a dislocated IOL, endoscopy can be a helpful adjunct to visualize IOL haptics to determine their position and orientation. Additionally, rarely, the haptic can be repositioned during the endoscopic procedure, avoiding the need for a separate surgery for IOL explantation and exchange.

Endoscopic vitrectomy can be a valuable addition to the vitreoretinal surgeon’s visualization armamentarium. This is most obvious in eyes with poor visualization and in cases that require access to structures that are difficult to visualize using standard visualization platforms. Although there are limitations with endoscopic vitrectomy, such as decreased illumination, small field of view, and lack of depth perception, it can be a critical skill for the vitreoretinal surgeon to master.

Digital Viewing Systems Bring Benefits to the OR