• Long-term use of hydroxychloroquine sulfate may result in parafoveal retinal toxicity.

• No single imaging platform can confirm the presence of hydroxychloroquine toxicity, but a combination of imaging tests can provide ample evidence for diagnosis.

• Microperimetry and adaptive optics are undergoing studies to confirm their usefulness in hydroxychloroquine toxicity screening.

Clinically, this manifests as a bulls-eye maculopathy, although these fundus changes are evident only in the later stages of disease (Figure 1). The mechanism of toxicity is unknown but is thought to be due to accumulation of the medication in the retinal pigment epithelium (RPE), leading to subsequent RPE degeneration.1 Because of this theorized accumulation, hydroxychloroquine toxicity can progress despite cessation of the medication.1,2

The estimated risk of hydroxychloroquine retinopathy in patients on chronic hydroxychloroquine therapy ranges from 0.4% to 8.0%.1 Toxicity is thought to be dependent on cumulative total dose.3 Additional factors that can precipitate early toxicity are concomitant renal disease and use of tamoxifen.3

Figure 1. Fundus photography of the right (A) and left eye (B) in a patient with early hydroxychloroquine toxicity is shown. A parafoveal early bulls-eye maculopathy is evident in both eyes.

AAO recommendations published in 2016 suggested that daily dosage of hydroxychloroquine should be less than 5.0 mg/kg of real body weight.3 At these doses, the risk of toxicity is minimal in early years but increases with duration of use. As reported by Marmor et al, the risk at this dosage is less than 1% up to 5 years, less than 2% up to 10 years, and almost 20% after 20 years.3

The AAO guidelines suggest that all patients beginning long-term hydroxychloroquine or chloroquine therapy have a baseline examination to establish a record of baseline fundus or nerve abnormalities. It can also be helpful to have these baseline findings to compare to future screening tests. The guidelines also recommend further screening at 5 years after the initial visit, due to the negligible risk of toxicity in the first 5 years if the patient is adequately dosed and has no high risk factors.

Screening tests vary widely, and there is no gold standard test to definitively diagnose hydroxychloroquine toxicity. Guidelines recommend Humphrey visual field (VF) and spectral-domain OCT (SD-OCT) annually, along with multifocal electroretinography (mfERG) and fundus autofluorescence (FAF) as needed. More frequent testing can be helpful in high-risk patients or those in whom toxicity is suspected.

Figure 2. VF testing in a patient with hydroxychloroquine toxicity demonstrates parafoveal depression, more prominent in the left than the right eye. These changes remained stable upon cessation of the medication.

Automated VF testing can be valuable in detecting early changes in the retina and, in a reliable patient, can be the most sensitive test to detect such changes (Figure 2).3,4 Standard 10-2 white SITA testing with pattern deviation is recommended for screening the central and parafoveal areas. Given the high prevalence of extramacular disease in Asian patients, a 24-2 or 30-2 VF is recommended for screening to capture areas that may be missed on a standard 10-2.

A common limitation in VF testing is variability between tests due to patient reliability. Additionally, given the subjectivity of the test, results can be difficult to interpret in the setting of false positives, false negatives, and fixation losses. Although VF testing has limitations, it is critical for early detection of macular toxicity and can be helpful when used in conjunction with a more objective test such as OCT, mfERG, or FAF. 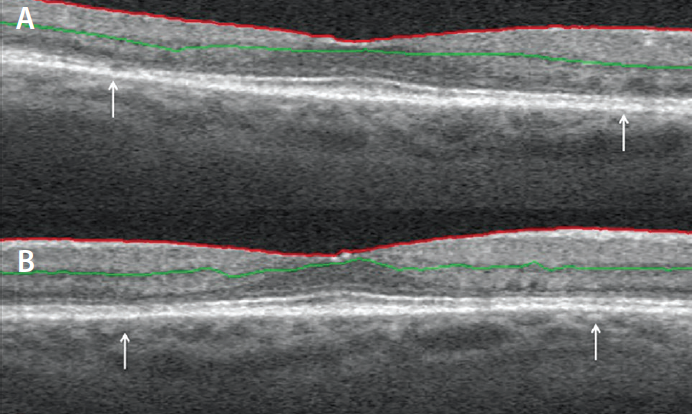 Figure 3. SD-OCT scan of the right eye in a patient with hydroxychloroquine toxicity is shown. Arrows indicate areas of outer retinal thinning on vertical (A) and horizontal B-scan (B).

SD-OCT is a widely available test that can be easily performed with reproducible results, regardless of patient compliance. In analyzing SD-OCT, it is imperative to pay special attention to the outer retina (Figure 3). Thinning of the photoreceptor layer, ellipsoid layer, outer nuclear layer, and RPE can be among the earliest signs of hydroxychloroquine toxicity.4 These changes often occur in the parafoveal area, although they can be more peripheral in Asian patients.

FAF is an objective imaging test that uses the properties of the RPE to detect early toxicity. In early hydroxychloroquine toxicity, FAF often shows subtle parafoveal hyperautofluorescence, thought to be related to increased lipofuscin activity in the RPE.4 In later stages of disease, hypoautofluorescence will be noted and is an indication of RPE cell death.5

Use of mfERG can provide objective confirmation of suspected hydroxychloroquine toxicity. Many consider it to be the gold standard for detection of suspected toxicity,6 but its widespread use is limited by its lack of availability in most ophthalmology offices. Testing with mfERG demonstrates localized paracentral amplitude loss in eyes with toxicity.7 Given that mfERG is not widely available, it is generally not preferred as a first-line screening method, but it can be helpful to confirm suspected toxicity seen on VF or SD-OCT testing.

Two additional tests that are being studied for early detection of toxicity are microperimetry and adaptive optics.

Microperimetry is a VF test that uses an algorithm to create an image of the patient’s retinal sensitivity overlaid onto a fundus image, thereby correlating structure and function. Early studies with microperimetry have shown sensitivity of approximately 73% and specificity of approximately 93% in detection of hydroxychloroquine toxicity. Microperimetry can be considered as an ancillary test in detection of toxicity, although further testing is needed for validation.8

Adaptive optics is a similar test that is being investigated. Early case reports have noted a correlation among VF abnormalities, SD-OCT changes, and disrupted cone mosaic patterns in patients with known hydroxychloroquine toxicity.9,10 Additional larger studies are needed for further validation.

There is no single best test for detecting hydroxychloroquine toxicity. However, SD-OCT and VF are good screening tests, and FAF and mfERG can help confirm a diagnosis of suspected retinal toxicity from hydroxychloroquine. Early detection of toxicity is critical to prevent permanent visual loss.

A Variety of Approaches to Buckle Placement