When Ultra-Widefield Retinal Imaging Is Most Useful

As our view of the retina expands, so too does our understanding of pathology and treatment.

The peripheral retina is the site of pathology in many ocular diseases, including diabetic retinopathy (DR), retinal vein occlusion (RVO), uveitis, retinal vasculitis, and rhegmatogenous retinal detachment (RRD). Careful clinical examination of the peripheral retina with scleral indentation is important in clinical decision-making when there is a need for additional testing and objective, reliable documentation of findings.

• Color fundus photography and FA are both conducive to UWF imaging.

• UWF imaging may be valuable in the diagnosis and management of patients with DR, RVO, uveitis, retinal vasculitis, or retinal detachment.

• UWF imaging may have a role in the treatment of DR and central RVO.

Diagnostic imaging techniques play an increasingly prevalent role in assessment of the retinal periphery. Ultra-widefield (UWF) imaging has changed the way ophthalmologists evaluate a patient’s fundus, and its use has led to a better understanding of the role that peripheral pathology can play in retinal diseases. UWF imaging modalities provide several options for posterior segment documentation and evaluation, including color and red-free images, fluorescein and indocyanine green angiography, and fundus autofluorescence.1

Here we present a brief review of some common retinal pathologies in which UWF imaging can provide a benefit to clinicians and researchers.

Visualization of the retinal vascular system via conventional fluorescein angiography (FA) is insufficient for examining patients with DR. The small size of the image capture area is one of the main disadvantages of conventional FA; each small image is akin to a small portion of a large canvas, and exact comparisons of the same area at different angiographic phases (or between two different sessions) is difficult and dependent on the photographer’s technical skills and the patient’s cooperation.

Retinal photography with conventional FA is able to capture an approximately a 30° area of the retina at one time, and it cannot capture the peripheral retina. UWF FA, by contrast, can capture an area of up to 200º of the retina (covering more than 80% of the retinal surface), with all vessels displayed in the same angiographic phase. With this type of image, clinicians can evaluate the full extent of nonperfused (ischemic) retinal areas and simultaneously detect the degree of leakage by capillaries, vessels, and retinal neovascularization throughout the retinal surface. UWF FA allows quick and easy location of each lesion and detection of all active neovascular foci during the same angiographic phase (Figure 1 and Figure 2). 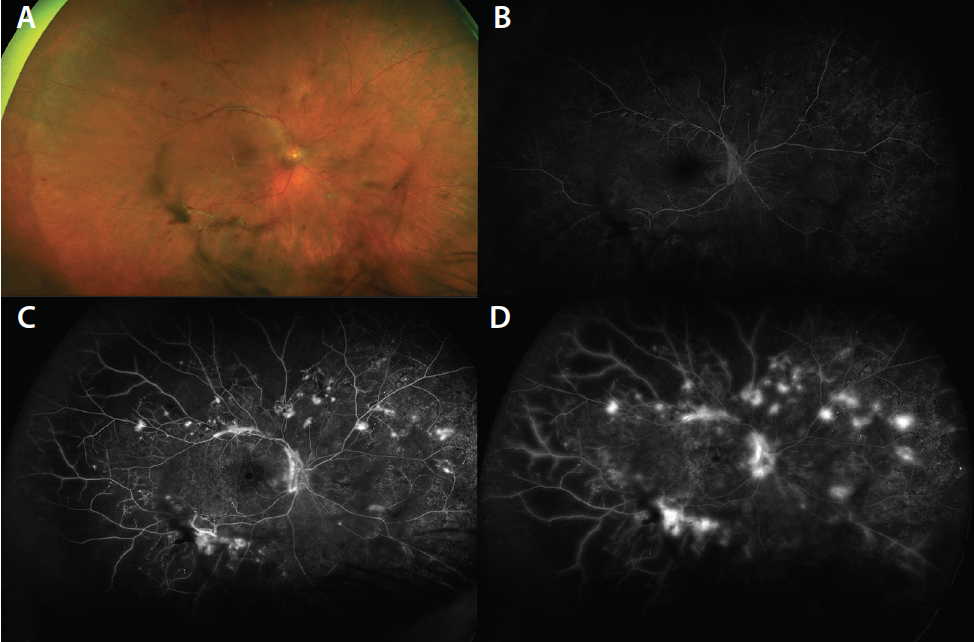 UWF FA has been shown to be more effective than conventional FA in finding vascular lesions. Wessel et al detected pathology, including retinal nonperfused areas and retinal neovascularization, in 10% of diabetic eyes in which that pathology was not evident on conventional FA.2 Moreover, those authors demonstrated that UWF FA, by revealing more retinal pathology, can change the degree of severity of DR diagnosis and may even lead to the diagnosis of DR in patients considered normal when assessed with conventional FA.2

A study by the DRCR Network demonstrated that, in eyes with proliferative DR, VA results in patients treated with ranibizumab (Lucentis, Genentech) were noninferior to those receiving PRP at 2 years and 5 years.4 These results showed that ranibizumab is a reasonable treatment alternative, at least through 5 years, for patients with proliferative DR. However, many patients receiving monotherapy with either anti-VEGF injections or PRP still develop vitreous hemorrhage, suggesting that combination therapy may be advisable in some instances.4

When this is the case, identifying specific areas of retinal nonperfusion with UWF FA may allow clinicians to perform TRP rather than PRP to treat neovascularization.5 If more than one round of laser treatment is required, it can be applied in a stepwise manner in combination with anti-VEGF therapy.

This targeted approach may minimize laser-induced side effects such as visual field loss and macular edema. Therefore, although UWF FA has been extensively studied as a diagnostic tool, it may also have a role in DR treatment. This form of panoramic visualization allows us to easily evaluate whether laser photocoagulation is needed to cover the entire ischemic territory or if neovascular foci are responding to treatment.

In a diabetic eye, UWF imaging allows immediate recognition of the degree and severity of DR and the extent of the ischemic retinal areas in the posterior pole, the equator, and the peripheral retina—all at the same time, in a single plane, and after a single shot. This capability makes UWF imaging an extraordinary tool for the care of these patients.

Because posterior uveitis is associated with significant changes in the retinal periphery, accurate diagnosis of uveitis requires careful clinical examination of this region. Management plans depend on the clinical appearance and angiographic pattern of retinal lesions. Peripheral retinal findings are likely to be missed by conventional FA tests, but they can be easily identified using UWF FA.6,7

Mesquida et al8 assessed the role of UWF retinal imaging in the diagnosis and management of retinal vasculitis associated with Behçet disease. In that study, UWF FA was a helpful tool for determining whether vasculitis was occlusive in nature and for quantifying the extent of capillary nonperfusion (CNP). Areas of retinal ischemia and neovascularization were easily identified in the study group, aiding the application of TRP therapy.8

Figure 3. An UWF color photograph of a 22-year-old woman with idiopathic retinal vasculitis (A) is shown. UWF FA in the same patient shows increased peripheral vessel leakage (B, C). Presence of peripheral inflammatory disease without areas of CNP indicates a low risk of neovascularization in this patient.

On the other hand, retinal vasculitis frequently presents with vision loss due to vascular complications.10-12 This is partly because subtle evidence of vasculitis may be easily missed in asymptomatic fellow eyes on clinical examination alone.8,10 Because the disease can be progressive and asymptomatic, it is important to assess both eyes for inflammatory signs.

RVO is a common indication for use of UWF imaging (Figure 4). Prasad et al demonstrated that UWF FA may provide visualization of peripheral retinal pathology in patients with branch RVO, and this information may be useful in evaluation and treatment.14 Prasad et al suggested that areas of untreated retinal nonperfusion may be a source of production of biochemical mediators that promote neovascularization and macular edema. UWF FA may be a powerful tool to identify therapeutic target areas for TRP, allowing efficient treatment of ischemic retina and potentially minimizing collateral destruction of adjacent viable perfused retina.14

Figure 4. UWF images of a 77-year-old woman with ischemic branch RVO in her left eye. Color photograph (A) and UWF FA in early (B) and late (C) phases are shown. The retinal nonperfused area is spread over a wide range from the site of occlusion to the far periphery.

UWF imaging may also have a role in the diagnosis of RRDs and in improving the documentation of RRDs (Figure 5). Additionally, UWF imaging may help with monitoring clinical progression and surgical planning for RRD repair.16 UWF color imaging can be used to confirm or more accurately show the extent and location of retinal detachments. This can have important treatment implications, particularly during preoperative planning, as the positioning of scleral buckles and optimal placement of trocars for vitrectomy may depend on the precise clock hour location of retinal tears.16

Figure 5. UWF imaging of a 65-year-old man with macula-sparing RRD in his right eye. The preoperative UWF color photo revealed a superior horseshoe-shaped retinal tear with subtotal RRD involving the macula (A). A 3-month postoperative color image demonstrated reattachment of the retina with laser chorioretinal scars in the superotemporal quadrant (B).

Additionally, UWF fundus autofluorescence imaging may reveal abnormalities in RRD that allow accurate demarcation of the extent of the RRD, thereby assisting in preoperative characterization of the detachment and postoperative counseling.17

UWF imaging has enhanced clinicians’ ability to fully examine the retina in several common disease states. Given the ways that UWF imaging can improve diagnosis and monitoring, modern retina practices stand to benefit by utilizing this platform.