Rethinking the use of antibiotics before and after surgery.

In a recent review, we coined the term odontoiatric model, based on the Italian odontoiatria—in English, dentistry. We aimed to emphasize that modern ophthalmic surgery, like dental surgery, can be 1-day or office-based surgery. We noted the incidence of endophthalmitis (nosocomial infection) has remained stable for the past 5 years.2

For years, the ocular surface was thought to be sterile due to the presence of lysozyme, antimicrobial peptides, immunoglobulin A complement, and other substances. A group led by Rachel Caspi at the US National Eye Institute, using an animal model, found that local bacteria on the ocular surface maintain ocular immunity and that transient disruption of bacteria via antibiotics results in a reduction in immune-related mechanisms.3 These authors demonstrated that a specific commensal organism, Corynebacterium mastitidis, stably colonized the ocular surface and stimulated the host’s ability to resist pathogenic fungal and bacterial infections. This demonstration of the role of a living, resident ocular microbiome will, hopefully, lead to more appropriate and judicious prescription of antibiotics.3,4

• Bacteria on the ocular surface help to maintain ocular immunity. Transient disruption of bacteria via antibiotics results in a reduction in these immune-related mechanisms.

• If a patient’s own eye flora are the source of most postprocedural endophthalmitis, and the use of postinjection antibiotics leads to increased resistance, then the indiscriminate use of antibiotics will lead to more resistant organisms in endophthalmitis.

• The natural history of endophthalmitis suggests that we should rethink the scheduling of postoperative visits in routine cases. Postoperative visits on day 2 or 3 after the injection, if performed at all, may make more sense than a return the next day.

Some principles regarding antibiotic prophylaxis in ophthalmic surgery are well established. First, microbiologic surveillance should guide the choice of antibiotics.5,6 That is, knowing the organisms that are highly prevalent in one’s region can help determine which agents will be most effective as infection prophylaxis.

Second, topical povidone-iodine is an effective monotherapy against infection for intravitreal injections and vitreoretinal surgery. It has broad-spectrum microbicidal activity (against bacteria, viruses, spores), no reported resistance, and a fast kill time. All physicians should perform surgical prophylaxis with povidone-iodine preparation. Ocular surface preparation for intravitreal injection using 5% povidone-iodine alone, in the absence of postinjection topical antibiotics, does not seem to induce bacterial resistance or change conjunctival flora.7-10

We have analyzed 10 years of microbiologic data (2003-2013) from the Torino Eye Hospital. The top five bacteria isolated in the hospital’s territory after postsurgical endophthalmitis were as follows:

Interestingly, 3 cases of Acinetobacter lwoffii and 23 cases of Peptostreptococcus spp. were also reported.

There is increasing evidence that coagulase-negative staphylococci show multiple antibiotic resistance mechanisms. The Bacillaceae deserve special attention because, compared with the past, this family of Gram-positive bacteria have become more aggressive, they grow rapidly, and they cause colliquative necrosis in tissues.5,6,17-19

Sometimes, it seems that microbiologic surveillance does not help physicians make appropriate choices of antibiotics. Up to 30% of vitreous taps are negative. However, in an apparently culture-negative endophthalmitis, it may be that S. epidermidis or some other indolent organism, including a virus that has already been sterilized by the body, is present. In rabbit eyes with experimental S. epidermidis endophthalmitis, culture results were negative after 48 to 72 hours, even though the entire vitreous of the enucleated eyes was cultured.20

We have tested in vitro susceptibility to different topical ophthalmic antibiotics of bacteria isolated from patients with endophthalmitis (Table) with the following findings:

• Fusidic acid is effective only against Staphylococcaceae;

• Netilmicin is effective against a wide spectrum of bacteria, with the exception of Streptococcaceae (S. pneumoniae and alpha-hemolytic Streptococcus);

• Fluoroquinolones are effective, except against coagulase-negative staphylococci;

• Moxifloxacin shows only moderate effectiveness against prevalent bacteria; and

• Chloramphenicol is a static antibiotic that is effective against all bacteria with the exception of Gram-negatives. 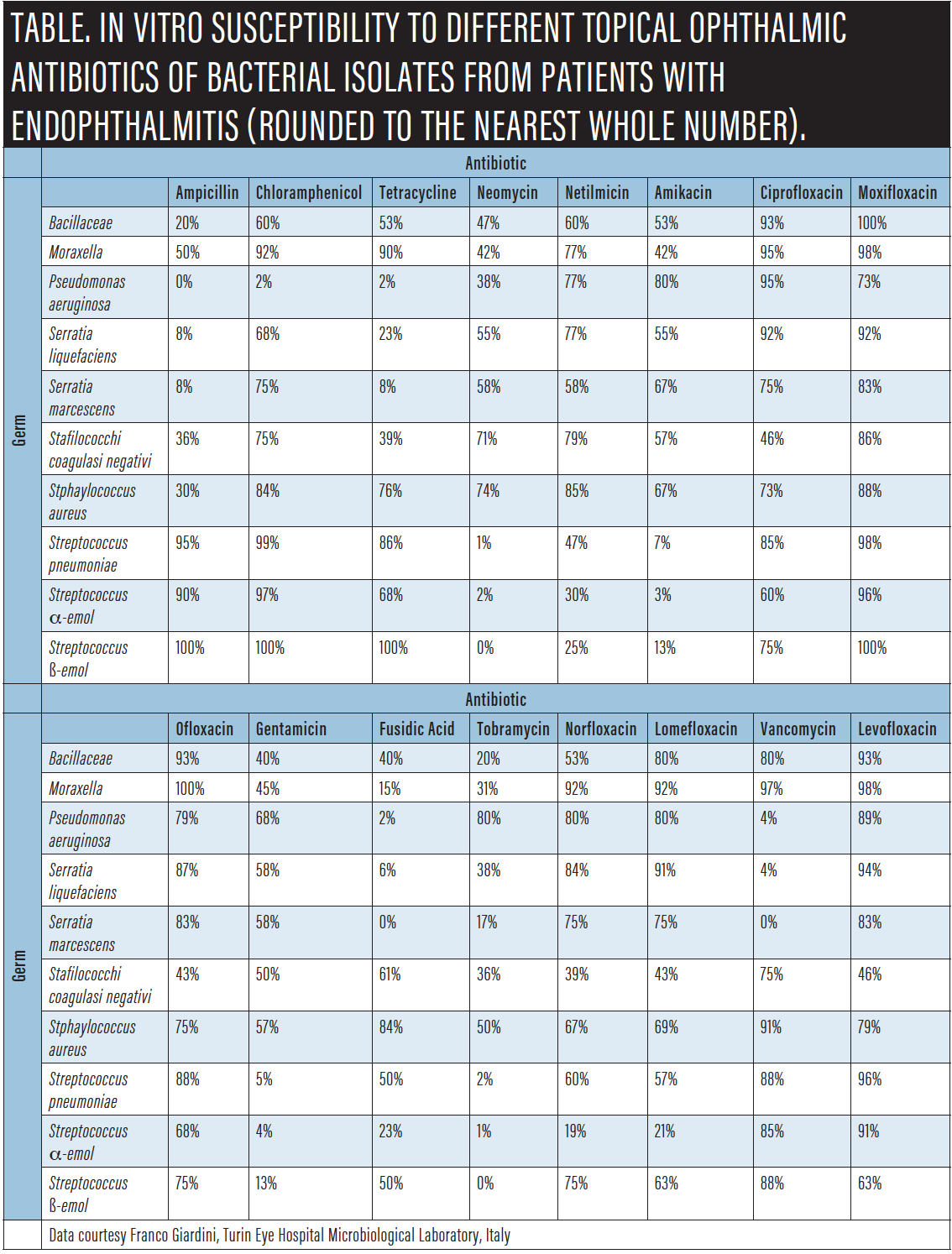 Bacteria can gain access to the anterior chamber during the perioperative period. If this happens, it is important to choose an antibiotic that can penetrate the cornea and achieve levels in the aqueous high enough to eliminate the bacteria. Fluoroquinolones can penetrate tissue, but are concentration-dependent, require frequent dosing, and bacteria are becoming more resistant to them.

Choices for prophylaxis vary by region. In Italy, chloramphenicol is used topically but not systemically. Across Europe, broad-spectrum topical antibiotic therapy is the convention following surgery (cataract and vitreoretinal surgery, and post-injection). A fluoroquinolone plus netilmicin or a fluoroquinolone plus chloramphenicol are the most commonly used combinations.

Chloramphenicol can also be concentration-dependent, depending on the type of bacteria.

Most studies of antibiotic use in ophthalmology do not have proper controls because we do not know how many patient eyes are really challenged by bacteria. Also, because endophthalmitis is uncommon, studies must be very large to be adequately powered to detect a change in the rate of endophthalmitis with different regimens.

All susceptibility and resistance data are based on systemic treatment standards, so they may not correspond to topical, intracameral, or intravitreal treatments.

Another limitation to studying antibiotic resistance is the variation in resistance patterns based on geographic location. The TRUST study is a surveillance report of more than 70,000 isolates collected from more than 200 institutions since 1999. This ongoing study does not include important antibiotics that are used in ophthalmology (ie, cephazolin, bacitracin, polymyxin B, neomycin, and sulfacetamide).25

If the patient’s own flora are the source of most postprocedural endophthalmitis, and if the use of postinjection antibiotics leads to increased resistance, then use of topical antibiotics will lead to more resistant organisms in endophthalmitis events. This has been shown in the ARCANE study.14

Schimel et al studied bacterial isolates from endophthalmitis and found a tenfold increase over 10 years in resistance to topical fluoroquinolones and an additional doubling of resistance over a 1-year period as the use of intravitreal injections increased.26

Another study by Milder et al demonstrated that even one drop of peri-injection antibiotics increased the development of bacterial resistance.27

From a public health perspective, certain processes may help limit unnecessary antibiotic use, thus limiting development of resistance. These targets include conversion from intravenous to oral antibiotic use, batching of intravenous antimicrobials, therapeutic substitutions, and formulary restriction. These strategies require fewer resources and less effort than other stewardship activities; are applicable to a variety of health care settings, including limited-resource hospitals; and have demonstrated significant financial savings.32

According to the principles of the Choosing Wisely campaign (choosingwisely.org), we should not routinely use antibiotics before or after intravitreal injections. It is quite surprising that we are still talking about issues raised in 2004, with no clear consensus in 2019.33

Regarding vitreoretinal surgery, no antibiotics should be given preoperatively. Routine antibiotics are unnecessary postoperatively after routine (ie, uneventful or uncomplicated) surgery.7,34-37 The guidelines in Europe leave the use of antibiotic prophylaxis to the discretion of the surgeon.

Choosing wisely is also a patient-specific choice. Complicated surgery has a higher risk of postprocedure infection, so antibiotic use should still be considered for selected cases such as: elderly patients with blepharitis; patients with a poor tear film; monocular patients or those with a prothesis in the fellow eye, a history of ocular trauma, or previous surgery; immunosuppressed patients for local or systemic reasons; and patients with diabetes, multiple diseases, multiple medications, or cancer. These patients may be more prone to infection and, therefore, good candidates for additional preventive measures, such as use of intracameral or preoperative antibiotics.

HOW DO THESE DATA AFFECT CLINICAL PRACTICE?

The natural history of endophthalmitis suggests that we should rethink the scheduling of postoperative visits in routine cases. We must shift the standard of care in a more patient-friendly direction without compromising safety.

Regarding injections, in many parts of the world, patients do not return for safety monitoring in the days following an injection. Instead, patients are given written instructions to call immediately if redness, pain, decreased vision, or other issues develop.

Regarding vitreoretinal surgery, while many routine cases should be reviewed on day 2 or 3 postoperative, it is the general legal consensus that a postoperative day 1 visit is required.38

From a medicolegal standpoint, we are safest when we adhere to the community standard. Unfortunately, the standard of care in many communities requires antibiotic use, even though, as suggested above, it may not be necessary. This makes it difficult for surgeons to go against the current standard.

It is difficult to prove definitively that antibiotics are unnecessary. For postinjection antibiotics, there are good data from both prospective and large retrospective trials that topical antibiotics are not helpful and may even be harmful particularly because, unlike cataract surgery or vitrectomy, which are likely to be performed only once per eye, intravitreal injections are often repeated numerous times per eye. There is little data to suggest that use of antibiotics before or after injection reduces endophthalmitis risk. Nonetheless, use of antibiotics in these situations may continue to be the standard of care until better data are obtained.

A multidisciplinary approach is important, and local microbiologic surveillance is mandatory. We should not give topical or oral antibiotics for intravitreal injection. We should prescribe broad-spectrum topical therapy following surgery based on local microbiologic surveillance. Antibiotic resistance in ophthalmology is necessarily applicable to systemic resistance defined because topical antibiotics obtain concentrations higher than oral antibiotics. Risk assessment is the key process to combat defensive medicine. In selected patients, additional preventive measures may be necessary.

19. Kowalski RP. Is antibiotic resistance a problem in the treatment of ophthalmic infections? Expert Review of Ophthalmology. 2013;8(2):119-126.

22. Kowalski RP, Kowalski BR, Romanowski EG, et al. The in vitro impact of moxifloxacin and gatifloxacin concentration (0.5% vs 0.3%) and the addition of benzalkonium chloride on antibacterial efficacy. Am J Ophthalmol. 2006;142:730-735.

29. Wilson JA, Loveday HP, Hoffman PN, Pratt RJ. Uniform: an evidence review of the microbiological significance of uniforms and uniform policy in the prevention and control of healthcare-associated infections. Report to the Department of Health (England). J Hosp Infect. 2007;66(4):301-307.

Closing the Gap in Diabetic Retinopathy: Data From the Latest Studies

This activity is supported by an independent medical education grant from Regeneron Pharmaceuticals, Inc.

Successful Management of Uveitis in a Patient With Unilateral Multifocal Choroiditis