Selecting the appropriate ICD-10 code for a uveitis encounter is crucial.

When selecting the appropriate ICD-10, you should choose the code that accurately reflects the initial confirmed diagnosis. The best code is the actual disease. Without a confirmed diagnosis, the next best is a sign or symptom. After that, other is the best option. The least appropriate code is unspecified. Only use unspecified when there is not a more definitive code.

Code the diagnosis you know. Do not code probable, suspected, or questionable diagnoses, do not you rule out conditions until they are confirmed.

These principles are relevant when coding for uveitis cases. Often, patients present with obvious symptoms and a diagnosis of anterior uveitis is clear. However, determining why the patient has uveitis and uncovering the underlying systemic disease may be possible with additional testing. As the results are reviewed and an etiology becomes apparent, a more definitive uveitis diagnosis and ICD-10 code will be assessed.

Based on these classifications, we can determine the appropriate ICD-10 code and start the diagnostic process. If the initial diagnosis is anterior uveitis, the next step is to specify the condition as primary acute, recurrent acute, or chronic. See Table 1 for an outline of the ICD-10 codes for anterior uveitis. 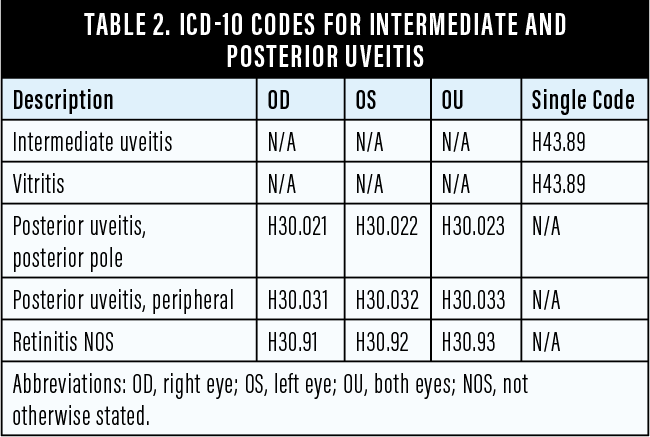 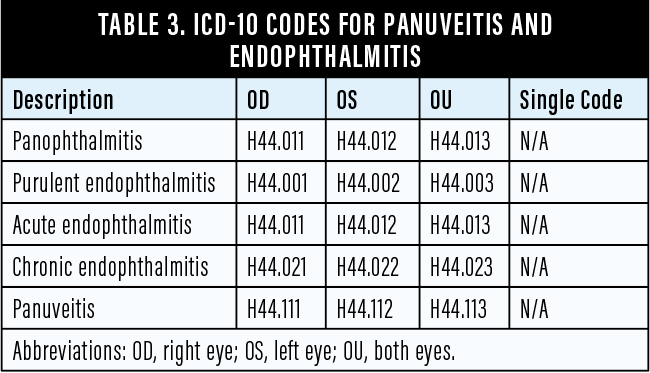 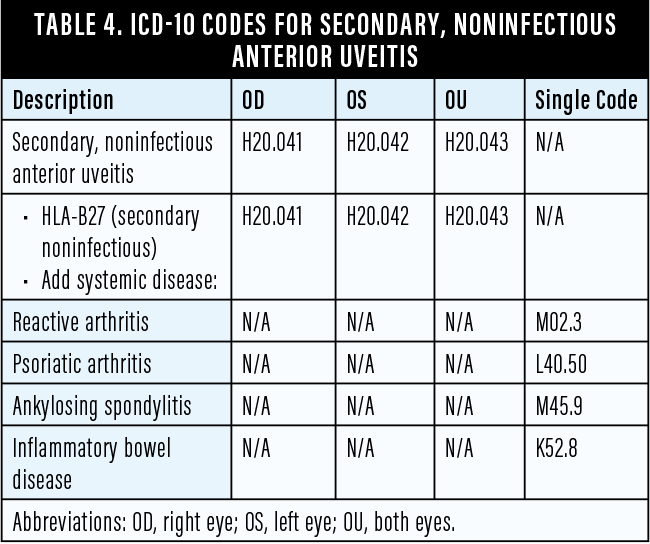 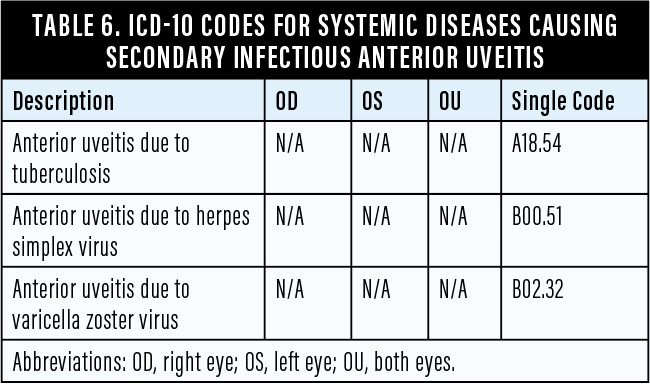 The process of diagnosing anterior uveitis and determining the most specific code is outlined in Figure 1. The initial diagnosis of anterior uveitis (primary acute, recurrent acute, and chronic) is used when waiting for a confirmed diagnosis. 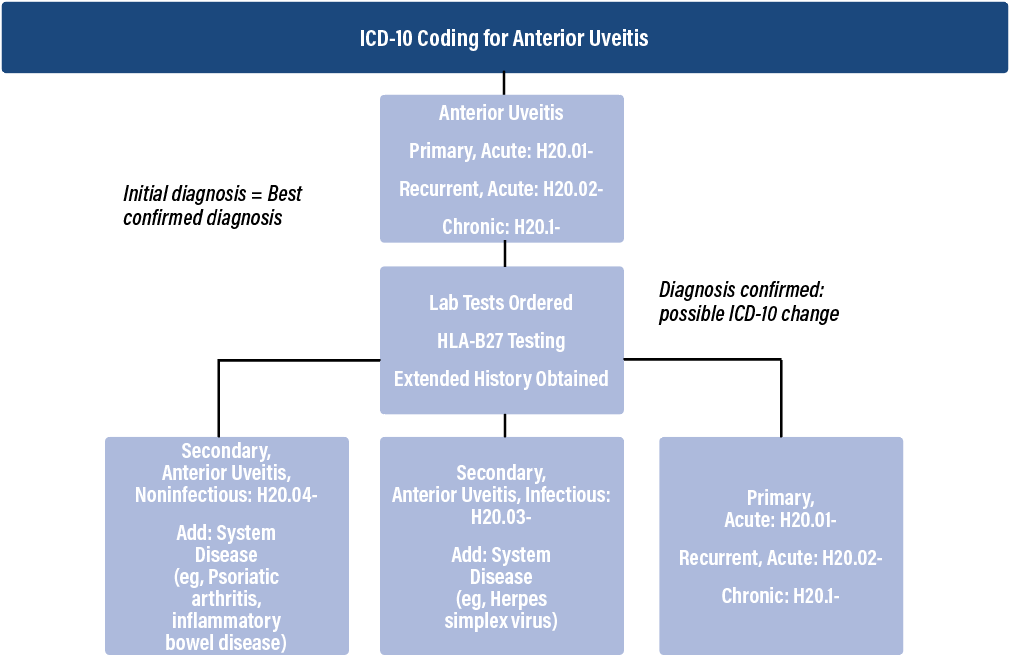 Figure 1. As test results are returned, a more precise diagnosis may be present. Figure adapted from: American Academy of Ophthalmology.

TEST YOUR KNOWLEDGE: CODE THIS CASE

Using the resources outlined above, the following cases can be reviewed, and the appropriate ICD-10 codes selected.

A 67-year-old Indian man presented with a 3-month history of bilateral redness, mild irritation, photophobia, and blurry vision. His pertinent history included no medications, multiple trips to India within the past 5 years, and no systemic illnesses. He was seen previously in an urgent care clinic that prescribed antibiotic drops 1 month prior to presentation with little effect on his symptoms. Examination revealed 1+ injection bilaterally, 1+ cell with 1+ flare in each eye, fine keratic precipitate OU, no obvious posterior synechiae, and no vitreous cell, chorioretinal lesions, or optic nerve head edema. VA was 20/50 OU and IOP was 17 OD and 19 OS.

The patient was diagnosed with primary chronic anterior uveitis based on the duration and location of the inflammation. He was started on prednisolone acetate 1% to be taken 6 times daily OU. Labs and imaging were ordered, and the patient returned 1 week later.

The patient’s laboratory work was unremarkable except for a positive QuantiFERON-TB Gold test and a chest x-ray demonstrating multiple focal granulomatous scars. HLA-B27 and RPR/FTA were both negative. At this point, the patient’s diagnosis was adjusted to chronic anterior uveitis secondary to tuberculosis. He was evaluated by the infectious disease department and, given the active inflammation with positive x-ray findings and QuantiFERON-TB Gold testing, the patient was started on quad therapy for antituberculous medication. Sputum cultures were negative. He was changed to difluprednate topical (Durezol, Alcon) QID OU. The inflammation resolved after 2 to 3 weeks, and he was tapered off of difluprednate over the course of 8 weeks. His IOP remained stable throughout the course of therapy. His vision improved to 20/25 and his symptoms resolved. Upon completion of the antituberculous therapy, he maintained quiescence for 12 months.

A 24-year-old man presented to the clinic with the complaint of bilateral floaters for the past 6 months. He noted no redness, irritation, or blurriness in either eye. Review of systems testing was negative for infection, neurological symptoms, tick bites, joint pains, rashes, or difficulty breathing. He had not sought care prior to presentation.

Examination revealed a quiet anterior chamber, clear cornea and lenses, moderate cell in the vitreous with inferior snowballs, and snowbanking OU. The optic nerves were flat and there was a good foveal reflex. VA was 20/25 OU and IOP was normal OU. Fluorescein angiography revealed peripheral vascular leakage and minimal angiographic edema (Figure 3). He was diagnosed with primary chronic intermediate uveitis and started on difluprednate OU BID. Laboratory work and imaging were ordered, and he returned in 2 weeks.

His workup was unrevealing with a negative RPR/FTA, QuantiFERON-TB Gold test, and lyme titers. HLA-B27 testing was negative. Imaging showed a clear chest x-ray and an MRI scan of his brain showed no evidence of multiple sclerosis. His examination had improved with decreased symptoms and slightly fewer vitreous cells and fewer apparent snowballs.

Given that no systemic disease was found on workup, his diagnosis was maintained as primary chronic intermediate uveitis (also known as pars planitis). Given a lack of central edema, he was maintained on topical therapy. We plan to repeat the MRI in 4 years to determine if there is interval change.

Next Article in this Edition

How to Maximize Your Medical Practice Operations to Prevent Fraud, Waste, and Abuse

How to Maximize Your Medical Practice Operations to Prevent Fraud, Waste, and Abuse

Business Matters: From Manager to Leader