After a series of failed trials, hope is on the horizon for the viability of gene therapy for wet AMD.

Gene therapy introduces new genes into cells to either replace a faulty gene or to create new gene expression and, potentially, a therapeutic protein. Gene therapy is a hot topic in many areas of medicine, including hemophilia, lysosomal storage disease, muscular dystrophy, cancer, neurodegeneration, and other acquired diseases. Retina has the distinction of being the field in which the first gene therapy was approved by the US FDA: Voretigene neparvovec (Luxturna, Spark Therapeutics) was approved in 2017 for the treatment of patients with confirmed biallelic RPE65 mutation–associated retinal dystrophy.

• Gene therapy may be administered via viral vectors or CRISPR technology, and it may be delivered subretinally or intravitreally.

• A gene therapy for wet AMD shows early promise and is moving forward.

Three first-generation gene therapy trials for wet age-related macular degeneration (AMD) were discontinued due to inconsistent efficacy; importantly, they reported no safety issues. These trials may have targeted the wrong gene or induced production of the wrong protein, made insufficient quantities of the target protein, or used the wrong viral vector or route of administration (subretinal versus intravitreal). See First-Generation Gene Therapy Trials for Neovascular AMD for details on these discontinued studies.

In the time since these first-generation trials in gene therapy for wet AMD were discontinued, our understanding of gene therapy for inherited retinal diseases and of diseases amenable to a gene therapy that produces a therapeutic protein has advanced significantly. Improvements in viral vectors, better selection of transgenes, and refinements in surgical delivery have deepened our knowledge about this therapeutic route—and therefore may offer improved outcomes in new clinical trials. 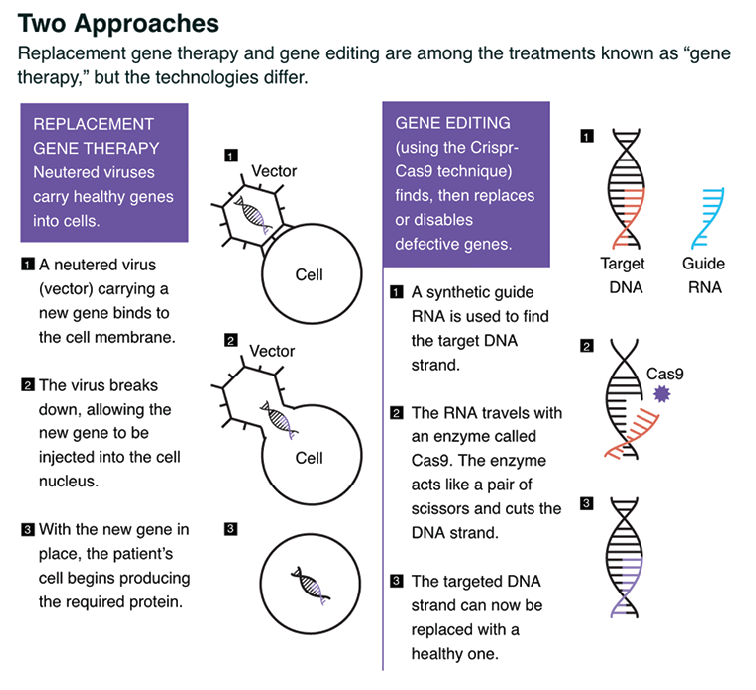 Viral vectors and CRISPR technology are being used to administer gene therapy in patients (Figure 1). It is important to understand their distinctions.

When gene therapy is delivered using viral vectors, adeno-associated viruses (AAVs) are often used to deliver modified DNA to cells. The AAV binds to a cell membrane and injects the modified gene into the cell’s nucleus. There are variants of AAV, some of which have been modified for different cellular and tissue affinities. Lentiviruses may be used for larger transgenes that are too big to be delivered via AAVs.

About 150 of the approximately 200 monogenetic inherited retinal diseases that cause blindness have a transgene that can fit into a virus. AAV2 is the viral vector used for administration of voretigene neparvovec.

CRISPR technology employs a specific RNA sequence attached to an enzyme that splices a native somatic chromosome to replace or disable defective genes. A synthetic guide RNA, travelling with the enzyme Cas9, finds the targeted DNA strand. Cas9 then cuts the DNA strand, allowing a healthy DNA strand to replace the original.

Surgical delivery of viral vectors with target transgenes has been attempted via subretinal administration, intravitreal injection, and, most recently, by suprachoroidal injection.1,2

A phase 1/2 open-label, multicohort, dose-escalation study is evaluating the safety and tolerability of RGX-314 (RegenexBio) in patients previously treated with anti-VEGF for wet AMD. RGX-314 is a nonreplicating, recombinant AAV serotype 8 (AAV8) vector encoding for a soluble anti-VEGF Fab protein, which binds to retinal pigment epithelial cells to produce a therapeutic anti-VEGF protein. The gene encodes for an anti-VEGF fragment of an antibody that is similar to ranibizumab (Lucentis, Genentech). It is introduced into the cell via the AAV8 vector and is transcribed and translated into the antibody protein. In the phase 1/2 trial, RGX-314 is delivered subretinally using AAV8 to produce more efficient gene delivery to the retinal pigment epithelium than AAV2.12

A total of 42 patients who were previously treated for wet AMD will be enrolled in the trial. A total of 33 patients have been dosed across five dose-escalating cohorts in the trial, and the program is on track to complete trial enrollment by the end of the first half of 2019. On average, these patients received 35 anti-VEGF injections before the trial began. Patients are required to be pseudophakic and must have demonstrated on spectral-domain OCT a response to anti-VEGF therapy; if reduction of fluid occurred following an anti-VEGF injection, they were subsequently taken to the OR. 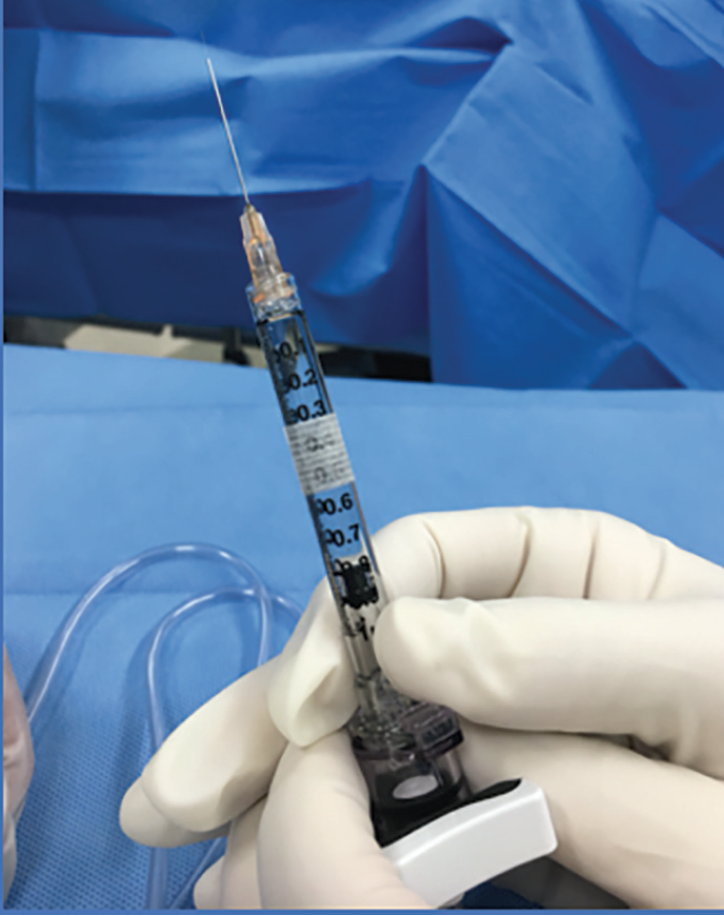 A standard small-gauge vitrectomy is performed, followed by injection of 250 μL of therapy outside of the macula using the surgeon footpedal-controlled MedOne MicroDose injection kit (RegenexBio; Figure 2) to create a single subretinal bleb in a healthy area of the retina. The target should be superior to the superotemporal arcade vessel or outside the arcades. Air-fluid exchange is performed followed by subconjunctival steroid administration at the end of the procedure. Systemic steroids and immunosuppression are not required.

This trial’s primary outcome is safety and tolerability of RGX-314 in patients with wet AMD through 6 months. Secondary outcomes are expression of RGX-314 protein in the eye, effect of RGX-314 on BCVA and central retinal thickness (CRT) as measured on spectral-domain OCT, and number of rescue anti-VEGF injections after administration of RGX-314.

• Oxford Biomedica’s phase 1 trial, the GEM study (n = 21), delivered a lentiviral vector for endostatin and angiostatin (RetinoStat) subretinally. It found no robust effect and showed that subretinal delivery was safe.2

• Avalanche’s phase 1/2a trial (n = 40) delivered AAV2 sFlt subretinally. It found no robust effect and that subretinal delivery was safe.3

Dose-dependent increases in RGX-314 aqueous protein were detected 1 month after delivery (6 weeks after anti-VEGF injection at entry). In these previously treated patients, the mean change in VA from baseline over time is stable or slightly improved. Across cohorts, these results are maintained, despite a decrease in injections across cohorts. Overall, the results show dose-dependent signals of efficacy across cohorts in protein production, anti-VEGF injections received, and maintenance of CRT and VA gains.

The future of gene therapy for the treatment of wet AMD is brighter, based on these preliminary results; pivotal trials are forthcoming. Subretinal gene therapy is promising, and other intravitreal and suprachoroidal delivery strategies are being explored. Gene therapy for wet AMD offers the potential to optimize patient outcomes while reducing treatment burden. With promising trials such as the one outlined above, we are moving ever closer to our goal of offering safe, durable, and effective therapy patients with neovascular AMD.

2. Yiu G. A0091: Suprachoroidal injection of AAV8 for ocular gene delivery in the nonhuman primate. Paper presented at: Association for Research in Vision and Ophthalmology Annual Meeting; April 30, 2019; Vancouver, Canada.

Providing Inflammatory Control in a Patient With Birdshot Chorioretinopathy

Using Photodynamic Therapy in 2019: Current Concepts for Real-World Use

Supported by a grant from Bausch + Lomb

Refining the Use of OCT in Diagnosing Glaucoma