A Q&A session with a leading expert on IOL-related pathology and complications.

IOL selection in routine cataract surgery is best managed by the anterior segment surgeon in consultation with the patient. In patients with complex pathologies in both the anterior and posterior segment, however, it is important for retina subspecialists to understand the characteristics of different types of IOLs to facilitate optimal IOL selection when necessary (Table).

IOL technology has evolved at a rapid pace and will continue to do so. Given that the tamponade materials used in retina surgery interact in various ways with different IOL designs and materials based on each model’s characteristics, and that changing technology may affect what we thought we knew about retina surgery’s consequences on IOLs, the three of us sought an expert to field questions about the relationships between IOLs and retina surgery.

We found that expert in Liliana Werner, MD, PhD, a Professor of Ophthalmology and Visual Sciences and Codirector of the Intermountain Ocular Research Center at the John A. Moran Eye Center at the University of Utah in Salt Lake City. Dr. Werner’s doctoral research explored the nature of biomaterials, centering on interactions between ocular tissues and different IOL designs, materials, and surface modifications. She has a uniquely qualified perspective on the interactions between retina surgery and IOL selection.

Some hydrophilic acrylic IOLs become opacified after exposure to air, gas, or oil tamponade, whereas other IOLs remain clear. What is the relationship between the type of tamponade used during retina surgery and the rate or risk of IOL opacification in the postsurgical period?

• Retina subspecialists need to be familiar with certain characteristics of IOL materials to achieve the best outcomes in some complicated cases.

• Hydrophilic acrylic IOLs can develop localized calcification on the anterior surface and subsurface of the optic, generally limited to the area of the capsulorhexis opening.

• Silicone oil droplets can remain stuck to the posterior surface of a silicone IOL after oil removal. 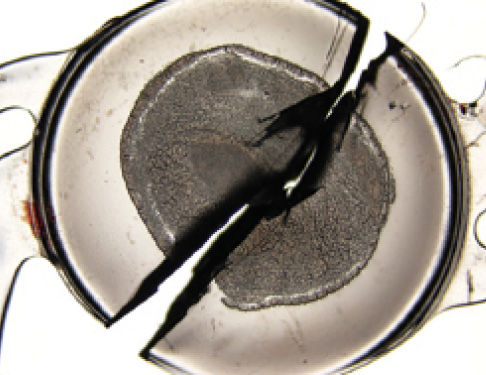 Liliana Werner, MD, PhD: We have analyzed different hydrophilic acrylic IOLs explanted because of a localized form of calcification on the anterior surface and subsurface of the optic, in an area generally limited by the capsulorhexis opening (Figure 1). Many cases were related to posterior lamellar keratoplasty techniques, such as Descemet-stripping endothelial keratoplasty (also known as DSEK) or Descemet-stripping automated endothelial keratoplasty (also known as DSAEK).1 Retrospective studies on those types of cases demonstrated that the rate of this complication could be as high as 9.7%.2 It appears that, in the instances of calcification, repeated intracameral air or gas injections were performed.

More recently, we have analyzed at least 30 other cases in which the same pattern of calcification occurred after procedures in the posterior segment, such as pars plana vitrectomy with gas or silicone oil, or after intravitreal injections of anti-VEGF agents. We do not know the rate of this complication after procedures in the posterior segment yet, as there are still no clinical studies done to verify it.

Calcification occurs in the area where the optic contacts the aqueous humor. Therefore, the key in these eyes implanted with hydrophilic acrylic IOLs—of various manufacturers and designs—may be a chronic disruption of the blood-aqueous barrier with a change in the aqueous humor occurring after repeated intraocular procedures. It is possible that the nature of the tamponade and the direct contact between the tamponade with the IOL do not represent the main factors.

Are there special considerations for retina subspecialists encountering a patient implanted with a multifocal IOL?

Dr. Werner: There are some studies suggesting that the view of the retina through multifocal lenses can represent a challenge. In a study done to determine the quality of the image of a grating target placed in the vitreous of isolated pig eyes and photographed through implanted refractive and diffractive multifocal IOLs, the authors found that both refractive and diffractive multifocal IOLs reduced the contrast of the retinal image when viewed through a flat corneal contact lens, but the image was less defocused when viewed through a widefield-viewing contact lens.3

Another study assessed the effect of multifocal IOLs on the accuracy of retinal OCT, comparing eyes with diffractive multifocal lenses and eyes with aspheric monofocal IOLs. The authors found no differences between the groups regarding macular thickness or volume measurements. Retinal OCT image quality was lower in the multifocal group, and these lenses were associated with a decrease in OCT image quality. However, this fact did not seem to compromise the accuracy of spectral-domain OCT retinal measurements.4

In a recent conversation with retinal surgeon Paul S. Bernstein, MD, PhD, at the Moran Eye Center, Dr. Bernstein stated that he has not been experiencing particular challenges using current retinal surgery techniques with patients implanted with multifocal IOLs. Of course, if those lenses are made of silicone materials, issues such as fogging during fluid-air exchange or the possibility of silicone oil attachment still apply.

It is worthwhile to remind surgeons that, due to the nature of multifocal optics, which are generally designed to divide light energy among multiple foci, preoperative evaluation of the patient’s macular function is recommended before indicating a multifocal IOL.5 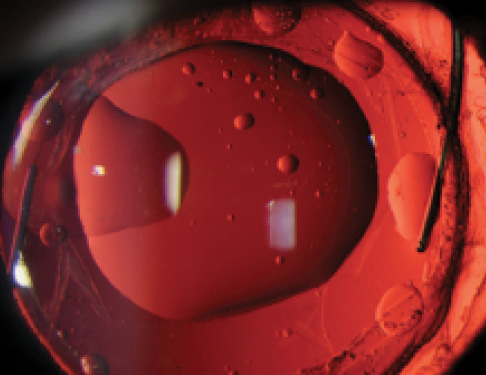 Dr. Werner: For silicone oil attachment, studies have been done on some solutions or solvents such as F4H5, perfluorocarbon-perfluorohexyloctane (PFHO), and O44.6-9 Most of these studies were done in vitro, and it is not clear whether potential toxicity to intraocular structures was thoroughly investigated. It does not appear that use of these solvents entered clinical practice, at least not in any widespread manner.

Some authors suggest injecting an OVD to mechanically push the silicone oil droplets away from the visual axis.10

Another situation to consider is calcification of IOLs in eyes with asteroid hyalosis (AH). This has been described only with silicone IOLs thus far.11 The calcification occurs on the posterior optic surface, and it can be observed with an intact posterior capsule. If posterior capsulotomy is performed, there is more contact between the posterior optic surface of the silicone lens and the vitreous containing the AH (composed of calcium and phosphates), as a result increasing opacity.

It is of interest that in these eyes the opacification can be at least partially cleaned with Nd:YAG laser application or through mechanical scraping of the IOL posterior surface. However, due to the presence of the calcium and phosphate in the vitreous, recurrence is usually observed.

Some have proposed performing a large vitrectomy to prevent future opacification in these eyes after mechanically scraping the silicone IOL surface.12,13 Follow-up appears to be limited to 6 months thus far. Longer follow-up in more eyes is necessary to confirm the long-term benefits of this surgical technique in the treatment of calcification of silicone IOLs in association with AH (Figures 3 and 4). The surgical risks of a pars plana vitrectomy in an eye with AH and no other ocular comorbidity should ideally be assessed versus the risk of a late IOL exchange before this intervention is considered. 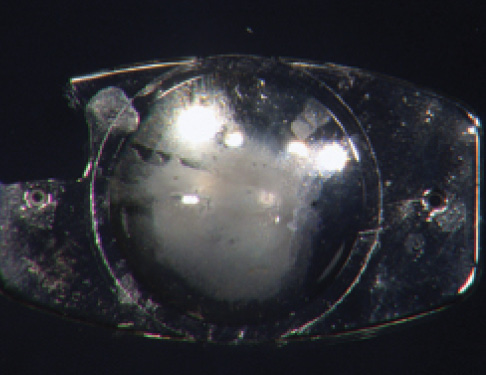 Figure 3. Plate silicone IOL explanted because of calcification on the posterior optic surface in an eye with AH. 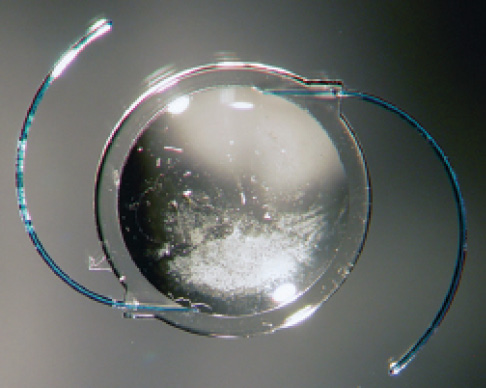 Figure 4. Three-piece silicone IOL explanted because of calcification on the posterior optic surface in an eye with AH.

When calcification of hydrophilic acrylic lenses occurs after procedures in the posterior segment, it appears that explantation is necessary when the calcification becomes visually significant. The surface of the lens cannot be cleaned by laser or mechanical scraping.

SCENARIOS IN THE OR

What advice would you give a retina surgeon encountering an eye with a silicone IOL that requires silicone oil tamponade? Is there anything that could reduce the chance of the oil sticking to the IOL?

Dr. Werner: If the posterior capsule is intact and can be kept intact while the silicone oil is in the eye, this may help prevent silicone oil contact with and attachment to the IOL. However, in certain eyes, such as those with compromised zonules, even with an intact posterior capsule there is a possibility of oil migrating to the anterior segment and contacting the IOL.

If the posterior capsule is open, little can be done, and explantation of the silicone lens may be necessary. Another issue that appears to be more frequent with silicone lenses when the posterior capsule is open is fogging, or condensation, during fluid-air exchange. In this instance, it appears that coating the IOL surface with an OVD may help to prevent visualization issues during surgery.14

What would you tell a retina surgeon who encounters a hydrophilic acrylic IOL and wishes to reduce the risk of opacification?

Dr. Werner: The opacification is due to calcification on the anterior surface and subsurface of the IOL optic. In some of the cases we analyzed in our laboratory, the posterior capsule was actually intact. There is evidence suggesting that direct contact between the tamponade (gas, silicone oil) and the anterior surface of the IOL is not the main factor in this complication, but rather the fact that there may be chronic disruption of the blood-aqueous barrier due to repeated intraocular procedures. If secondary procedures are necessary to reattach the retina, there is not much that can be done. It would be interesting to perform clinical studies, even if retrospective, in an attempt to figure out the rate of calcification of hydrophilic acrylic IOLs after posterior segment procedures. When this complication is observed after DSEK, DSAEK, or Descemet membrane endothelial keratoplasty (or DMEK) a rate of up to 9.7% has been described.2

Imagine the case of a patient with a silicone IOL or a hydrophilic acrylic IOL in whom posterior capsular opacification was noted during vitrectomy. Does keeping the posterior capsule intact rather than performing a capsulotomy influence the risk of oil attachment or IOL opacification? Is there anything else to consider in this patient?

Dr. Werner: If vitrectomy can be performed with visualization through the intact posterior capsule, this would help prevent silicone oil attachment to the surface of the IOL, which can be a particularly important problem in eyes with silicone IOLs. However, as mentioned above, in cases of calcification of hydrophilic acrylic IOLs after posterior segment procedures, this would perhaps not make a difference.

Sustained Suppression of VEGF: Looking Forward and Looking Back

Using Photodynamic Therapy in 2019: Current Concepts for Real-World Use

Supported by a grant from Bausch + Lomb

Providing Inflammatory Control in a Patient With Birdshot Chorioretinopathy