Choroidal metastasis is rare in individuals with renal cancer.

A 67-year-old male presented to the University Health Ophthalmology Clinic with Truman Medical Center with a 2-month history of photophobia and increasing flashes and floaters in the right eye (OD). He reported partial loss of his peripheral vision and intermittent loss of central clarity of vision. He said he experienced no pain with eye movement and reported no recent trauma.

The patient’s medical history was significant for renal cell carcinoma (RCC), diagnosed in 2004 and treated by surgical resection without additional chemotherapy. The patient was referred by an outside physician after a choroidal lesion was noted in the periphery temporally OD. 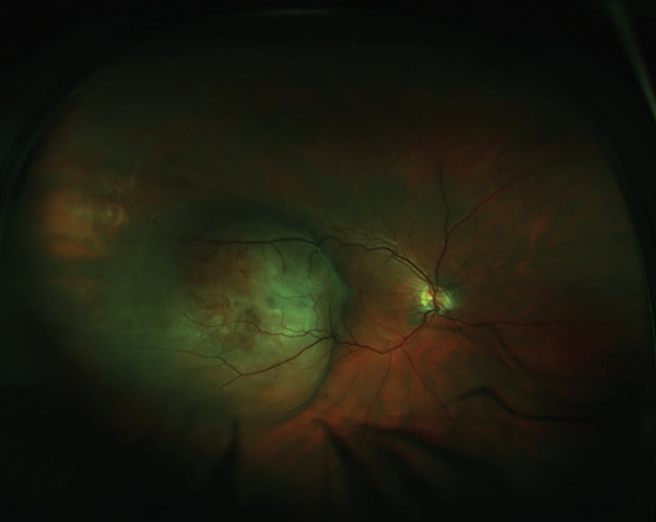 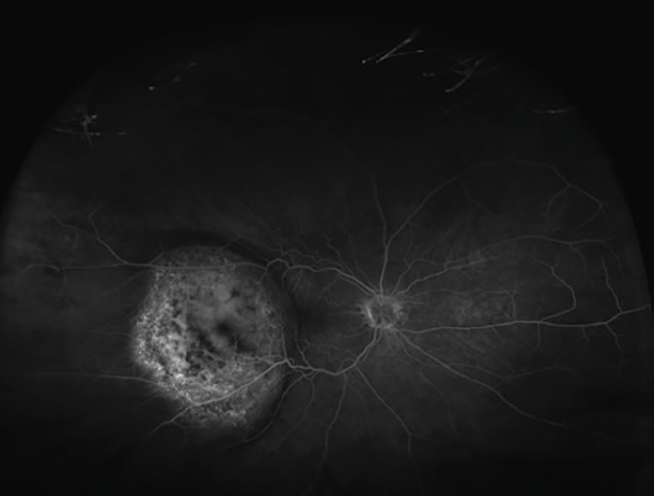 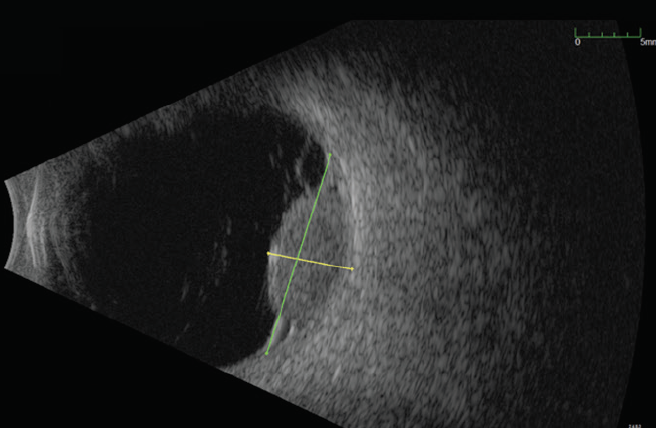 Initial differential diagnosis included choroidal melanoma and choroidal metastasis from the previous RCC. The patient was referred to radiation oncology to determine eligibility for brachytherapy and to further determine the possibility of RCC metastasis. Due to the history of RCC without chemotherapy treatment, the presumed diagnosis was RCC metastasis to the choroid.

The patient returned to the eye clinic several months after starting systemic treatment with the oral chemotherapy agent pazopanib (Votrient, Novartis). The patient had a significant ophthalmologic therapeutic response to the drug; the choroidal lesion had shrunk to almost half its original size, as documented on color photography (Figure 4). The patient’s VA had improved to 20/40 OD and remained 20/20-1 OS. 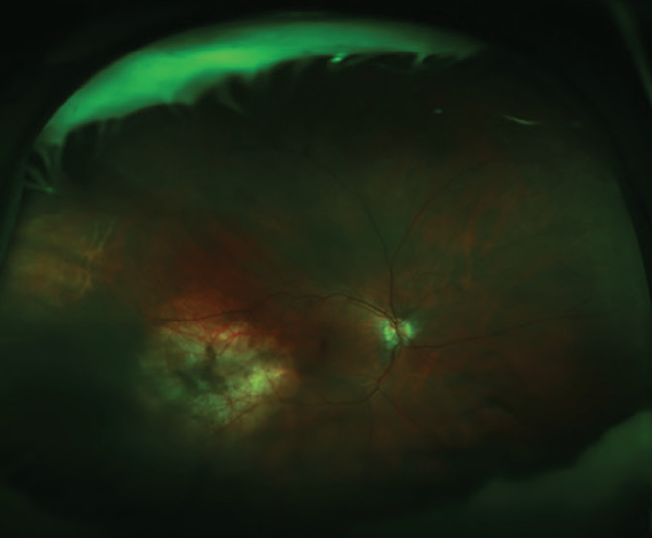 Ocular ultrasound demonstrated a significant decrease in the size of the choroidal mass and elevation of the retina (Figure 5). 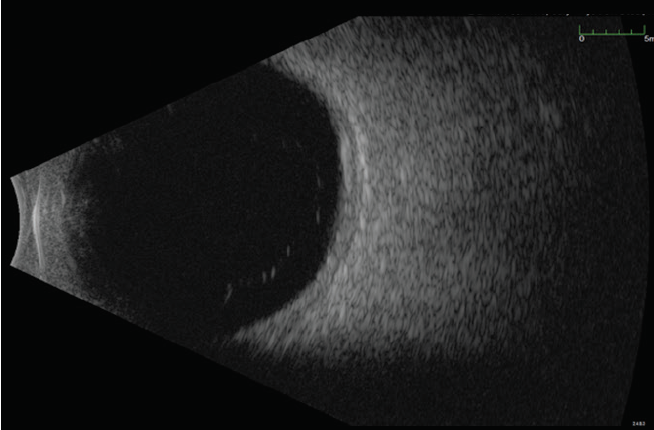 The patient was seen again at 3 and 6 months after this visit, and stabilization of the choroidal lesion was noted. VA continued to improve, with most recent measurement at 20/30 OD. At the most recent visit, 18 months after the start of oral pazopanib, complete regression of the choroidal metastasis was noted. The patient was officially diagnosed with malignant neoplasm of the right choroid secondary to metastasis of RCC, and successful treatment was achieved with the oral chemotherapeutic agent alone.

Choroidal metastasis is the most common intraocular malignancy. Most instances are metastasis from a primary breast or lung cancer. RCC with any metastasis presents with an overall poor prognosis, but treatment options are expanding.1,2 RCC is known to metastasize to the lung, bone, liver, and brain, but this cancer has also been reported to metastasize to other sites less commonly. Although it is rare for the choroid to show metastasis from a primary RCC, it sometimes can be the first presenting sign that the patient has a malignant kidney tumor.3

A-scan ultrasonography can be important in determining a diagnosis; RCC metastasis to the choroid is highly vascularized and tends to show higher internal reflectivity on A-scan than a melanoma. Because RCC metastasis can involve the entire uvea, full examination of the iris and ciliary body is warranted.5

Our patient was treated with pazopanib, a tyrosine kinase inhibitor (TKI) that prevents tumor cell angiogenesis and proliferation. Several randomized controlled trials in RCC have shown pazopanib to be efficacious, with an objective response rate up to 30% with the drug compared to 3% with placebo.7

It is important to mention that other chemotherapeutic drugs have been studied for treatment of metastatic RCC. Mammalian target of rapamycin inhibitors, or mTOR inhibitors, such as temsirolimus (Toricel, Pfizer) and everolimus (Afinitor, Novartis), and antiangiogenic antibodies such as bevacizumab (Avastin, Genentech) are other agents targeting cell growth that have been used to treat RCC. Although these drugs have been shown to be efficacious with similar overall survival rates, the prevalence of side effects outweighs those reported with pazopanib.2

This case demonstrates a rare presentation of metastatic RCC that was treated with oral chemotherapy alone. Metastases to the choroid are unlikely to be from the kidney, but this possibility must always be considered in patients with a history of RCC. It is important to recognize the differences between choroidal metastasis and choroidal melanoma by closely analyzing the patient’s history and using clinical tools.

This case demonstrates the possibility of using only oral chemotherapy to slow or stop progression of metastases. We were able to maximize this patient’s quality of life, as his treatment required no intravenous chemotherapy, brachytherapy, external beam radiotherapy, or enucleation. Close follow-up with ophthalmology and oncology are warranted to properly monitor patients’ responses. Future studies may focus on the differences among oral chemotherapeutic agents directly—not only in efficacy but also in quality of life.