This review will help you understand where several potentially important studies stand.

The completed HAWK and HARRIER studies were parallel randomized, double-masked, multicenter phase 3 trials investigating the efficacy and safety of the anti-VEGF agent brolucizumab in the treatment of wet AMD.1 HAWK and HARRIER compared brolucizumab with aflibercept (Eylea, Regeneron); they are the only trials comparing these drugs to date.

Researchers gathered data from 408 sites in North, Central, and South America; Europe; Asia; Australia; and Japan. Eligibility criteria required patients to be at least 50 years old, to be treatment-naïve, and to have demonstrated active choroidal neovascularization lesions secondary to AMD affecting the central subfield. Snellen VA equivalent range for inclusion was 20/32 to 20/400.1

After three monthly loading doses, patients in the brolucizumab groups received treatment every 12 weeks; there was an option to adjust dosing to every 8 weeks based on masked assessments of disease activity at defined visits. Patients in the aflibercept group received treatment every 8 weeks at the time of study initiation, which is consistent with that drug’s US FDA labeling.2

HAWK enrolled 1,082 patients and HARRIER 743. Demographics and baseline ocular characteristics were similar across groups in both trials. Both trials had high completion rates. The primary endpoint was noninferiority of mean BCVA change in the brolucizumab groups compared with aflibercept from baseline to week 48. Secondary endpoints included central subfield retinal thickness, retinal fluid (intraretinal and/or subretinal fluid), and disease activity.

Brolucizumab met the primary endpoint of the trial and showed superiority in secondary endpoints.1 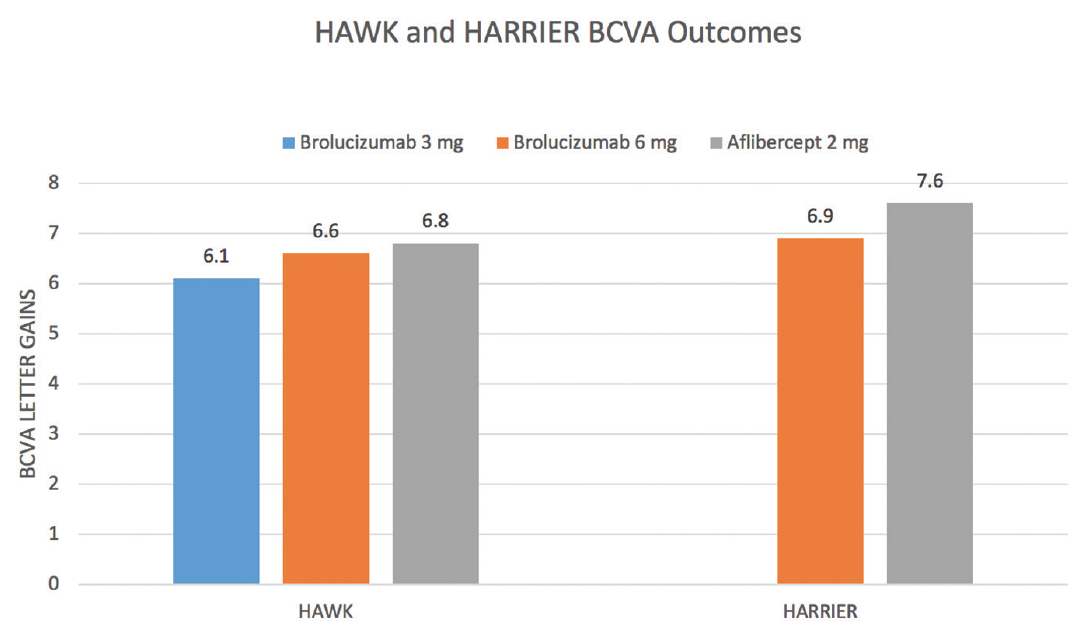 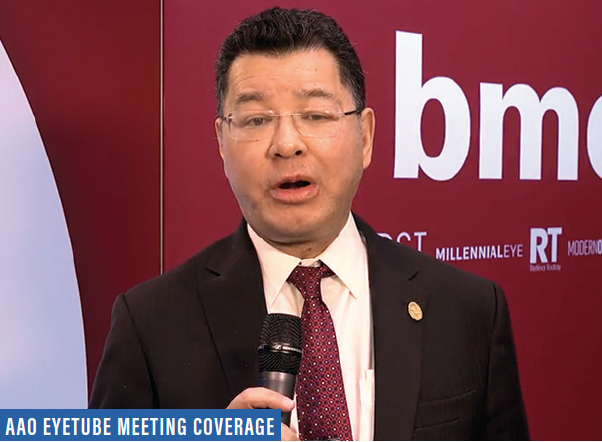 Adverse events were similar across groups in both trials. Of note, in HAWK, the incidence of uveitis was 2.2% and of iritis was 2.2% in the brolucizumab 6 mg group compared with 0.3% and 0.0%, respectively, in the aflibercept group; corresponding rates in HARRIER were less than 1.0% in both arms.1

In October, the FDA approved brolucizumab for the treatment of wet AMD. The labeling specifies 6 mg (0.05 mL) monthly for three doses followed by one dose of 6 mg (0.05 mL) every 8 to 12 weeks.3 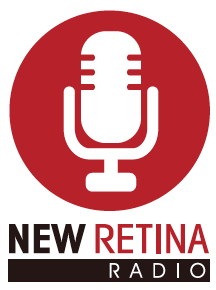 Rahul Khurana, MD, parses the CEDAR and SEQUOIA data; Glenn Jaffe, MD, details findings from the HAWK and HARRIER trials; and Nathan Steinle, MD, discuses faricimab in the latest episodes of New Retina Radio. Subscribe to the podcast in your podcast feed or listen online at eyetube.net/podcasts.

It remains to be seen how real-world performance will stack up against the phase 3 clinical trial data and how quickly physicians will adopt use of this anti-VEGF option. The addition of brolucizumab to the retina specialist’s armamentarium could reshape the landscape of wet AMD management. For the first time, retina doctors will have an anti-VEGF option indicated for injection as infrequently as every 3 months. The extended durability of this drug may reduce the treatment burden on a patient population that is subject to frequent visits and injections with current options. We look forward to learning more about the drug’s use and performance in real-world settings.

The SEQUOIA and CEDAR studies were phase 3 multicenter, randomized, controlled trials that compared abicipar to ranibizumab (Lucentis, Genentech) for the treatment of wet AMD.

Abicipar utilizes a novel mechanism—designed ankyrin repeat proteins, or DARPin technology—to decrease VEGF levels. Whereas current anti-VEGF therapies are based on antibodies or antibody fragments, DARPin technology mimics antibodies, and compounds can be designed to have high specificity and affinity for a specific target. These proteins are smaller than antibodies, and it is expected that they may have better tissue penetration, high affinity that enables them to be active at lower concentrations, and increased stability leading to a longer lasting effect.

The primary endpoint of the study was the proportion of patients with stable vision, which was defined as a loss of less than 15 ETDRS letters, at week 52. Secondary endpoints included mean change from baseline in ETDRS BCVA, mean change from baseline in central retinal thickness, and proportion of patients with at least a 15-letter gain at week 52.

In both studies, the 8-week and 12-week abicipar arms met the prespecified criteria for noninferiority to monthly ranibizumab treatment for the primary endpoint.5 Initial visual gains for patients in the abicipar arms were maintained throughout week 52.6

The overall incidence of treatment-emergent adverse events was comparable among all three treatment groups. However, abicipar-treated patients had a higher risk of developing intraocular inflammation compared with ranibizumab-treated patients. Incidence of intraocular inflammation was similar among the two abicipar treatment arms (15.1% and 15.4% in the abicipar 8-week and 12-week arms, respectively), and was 0.0% in the ranibizumab arm.

MAPLE was a 28-week open-label study that enrolled 123 patients with wet AMD and evaluated the safety of abicipar produced using a modified manufacturing process. In MAPLE, the incidence of intraocular inflammation was 8.9%.7 This was lower than the rate observed in the abicipar arms in the SEQUOIA and CEDAR studies but higher than the rate observed in the ranibizumab arms in those studies.

A biologics license application for abicipar was submitted to the FDA in September. Action on the filing is expected in 2020.

Faricimab is a bispecific antibody designed specifically for the treatment of retinal diseases that simultaneously binds to and deactivates angiopoietin-2 (Ang-2) and VEGF-A. By targeting both Ang-2 and VEGF-A, faricimab may achieve sustained efficacy at longer treatment intervals.

Patients received dosed injections monthly for 20 weeks and were observed up to week 36 to assess durability. In the treatment-naïve patients, 6.0 mg faricimab, 1.5 mg faricimab, and 0.3 mg ranibizumab resulted in mean improvements of 13.9, 11.7, and 10.3 ETDRS letters from baseline, respectively (Figure 2) The 6.0-mg faricimab dose demonstrated a statistically significant gain of 3.6 letters over ranibizumab (P = 0.03). Patients in the faricimab arms demonstrated a dose-dependent reduction in mean central subfield thickness and a longer mean time to retreatment during the observation period compared with ranibizumab.8,9 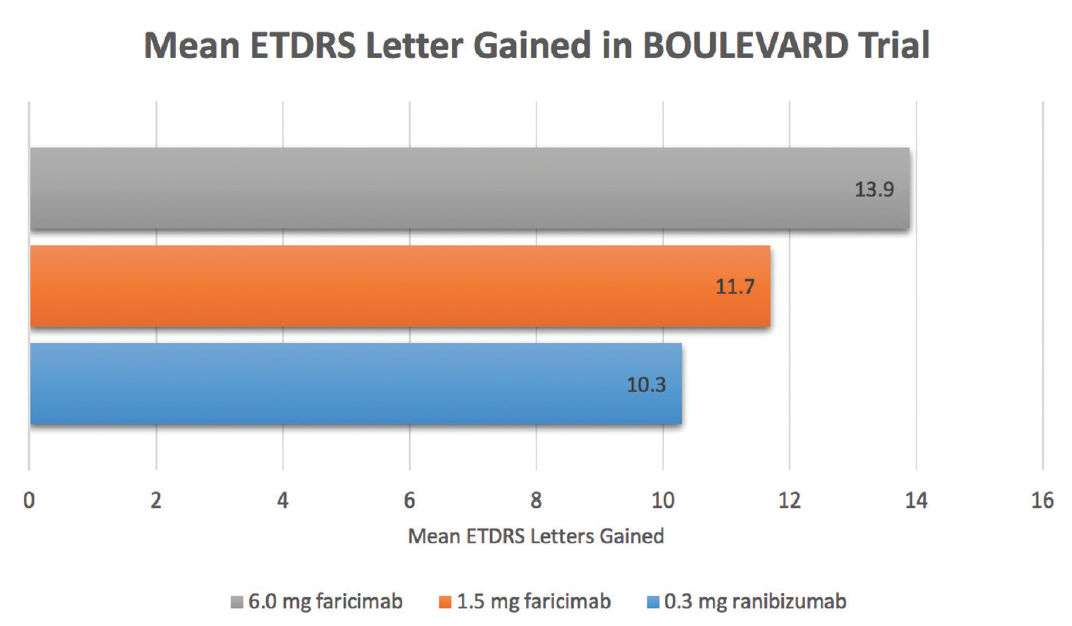 Figure 2. In the phase 2 BOULEVARD study, patients who received 6.0 mg faricimab demonstrated a greater mean gain of 13.9 ETDRS letters than those receiving 0.3 mg ranibizumab, who demonstrated a mean letter gain of 10.3 letters. The difference was statistically significant (P = .03).

YOSEMITE and RHINE are phase 3, randomized, controlled trials evaluating the safety and efficacy of faricimab versus aflibercept for the treatment of diabetic macular edema.10,11 It should be noted that the comparator drug here is different; the phase 2 BOULEVARD trial compared faricimab to ranibizumab.

In each study, more than 900 patients are being randomly assigned to one of three arms: faricimab every 8 weeks, aflibercept every 8 weeks, or a personalized treatment schedule in which patients will be dosed according to the study protocol. The primary endpoint of each study is the change in BCVA from baseline at 1 year. YOSEMITE and RHINE completed enrollment in October.

The PDS is a device designed to provide sustained release of ranibizumab. The device is implanted surgically and can be refilled in an office setting.

LADDER was a phase 2, randomized, controlled clinical trial evaluating the efficacy and safety of the PDS in patients with wet AMD. Patients were randomly assigned 3:3:3:2 to receive the PDS filled with ranibizumab 10 mg/mL, 40 mg/mL, 100 mg/mL; or monthly intravitreal ranibizumab 0.5 mg.

The primary endpoint was the time to first required PDS refill, which was determined to be 15 months, 13 months, and 8.7 months in the 100 mg/mL, 40 mg/mL, and 10 mg/mL groups, respectively. A dose response was seen across multiple endpoints in patients with wet AMD. The 100 mg/mL arm showed visual and anatomic outcomes comparable with monthly therapy with ranibizumab 0.5 mg but with a reduced total number of treatments.12

ARCHWAY is a phase 3, randomized, clinical trial comparing the PDS to intravitreal ranibizumab injection. In the trial, patients will be randomly assigned to receive PDS implantation with refills at fixed 24-week intervals of a special formulation of 100 mg/mL ranibizumab or monthly ranibizumab 0.5 mg therapy. The primary endpoint of the study is noninferiority to ranibizumab as measured by change in BCVA averaged over weeks 36 and 40.13

Retina could be on the brink of a pharmacologic breakthrough not seen since the approval of ranibizumab in 2006. A new wave of available treatments could lead to a welcome shift in the landscape of therapeutic options for retinal disease. With the aging of the population and the increasing rate of diabetes, treatments with longer durations of effect and greater efficacy will be needed to reduce treatment burdens and increase access to care. We are hopeful that exciting breakthroughs may be on the horizon thanks to the number of pharmacotherapies in clinical trials that are nearing or now crossing the finish line of approval and clinical acceptance.