Highlighting the characteristics of this condition that is experiencing a resurgence in some parts of the world.

Several recent reports have indicated a resurgence of the prevalence of syphilis in some regions of the world.1-4 Reported ophthalmic manifestations of syphilis include interstitial keratitis, uveitis, chorioretinitis, acute retinitis, retinal vasculitis, and cranial nerve and optic neuropathies,5 as well as rare manifestations such as gumma of the superior orbital muscle bundle and anterior nodular scleritis.6,7 These disorders can occur due to other etiologies, so a high index of clinical suspicion is required to identify Treponema pallidum as the causative agent.

In this article we report a case of acute placoid retinal pigment epitheliopathy secondary to tertiary syphilis, with acute loss of vision as the presenting complaint. Treatment and clinical outcome are discussed. 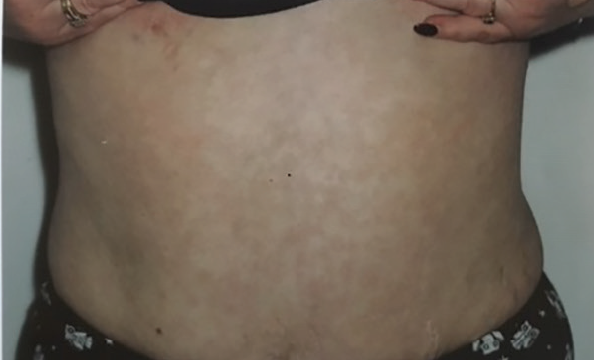 Figure 1. An all-over erythematous rash that was present for more than 7 weeks before onset of visual deterioration.

On examination, BCVA was 0.70 logMAR in the right eye (OD) and 0.90 in the left eye (OS) logMAR. The anterior chamber was quiet in each eye. Fundus examination showed circumscribed placoid areas of subtle retinal edema in the macular region in each eye (Figures 2 and 3). 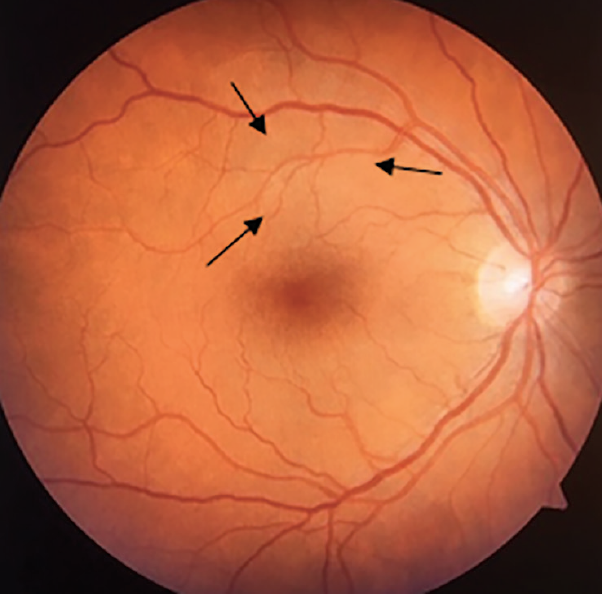 Figure 2. Color photo of the fundus OD showing an area of subtle retinal elevation superior to the fovea (arrows), due to chorioretinitis. 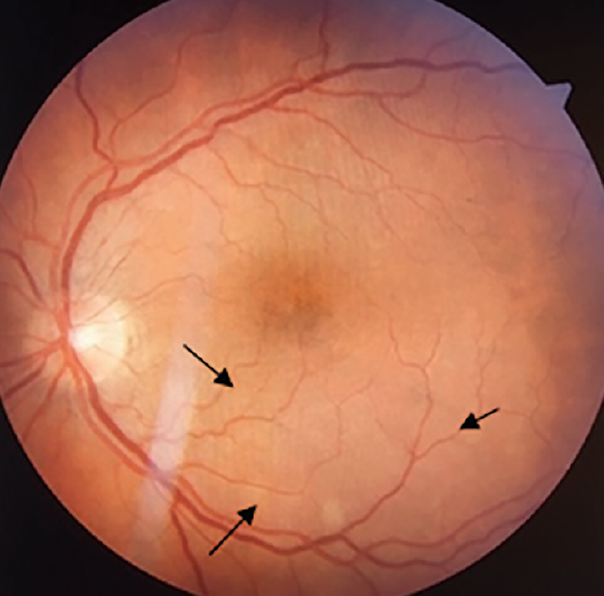 Figure 3. Color photo of the fundus OS showing area of subtle retinal elevation superior to the fovea (arrows), due to chorioretinitis.

Spectral-domain OCT showed irregularity and thickening of the retinal pigment epithelium (RPE) layer, hyper-reflectivity of the outer nuclear layer, and obliteration of the outer limiting membrane in the macular region of each eye. The macula OD also showed evidence of subretinal fluid (SRF) at the fovea (Figures 4 and 5). 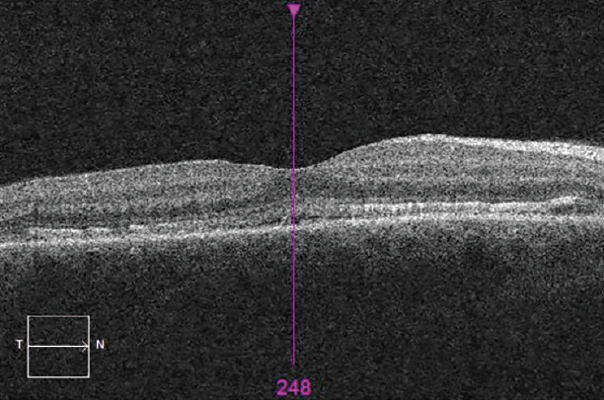 Figure 4. OCT showing irregularity and thickening of the RPE and obliteration of the outer limiting membrane in the macular region OD. The macula showed evidence of subfoveal fluid. 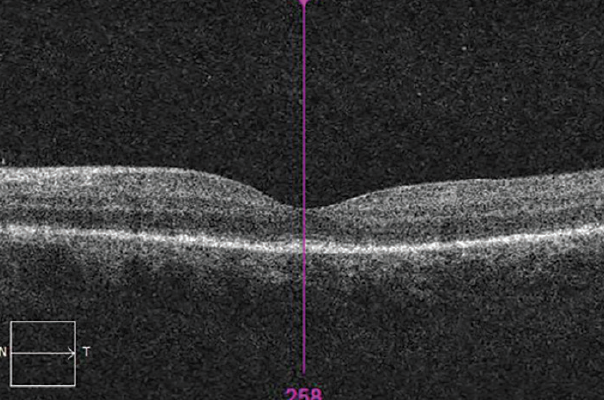 Figure 5. OCT showing irregularity and thickening of the RPE and obliteration of outer limiting membrane in the macular region OS.

Fluorescein angiography (FA) showed fluorescent mottling of the macular region OS followed by leakage in the late frames, involving fairly circumscribed areas superior and inferior to the fovea. The fundus OD showed an area of diffuse hyperfluorescence in the late frames on FA, localized superior to the fovea and involving an area of about 2 disc diameters (Figures 6 and 7). 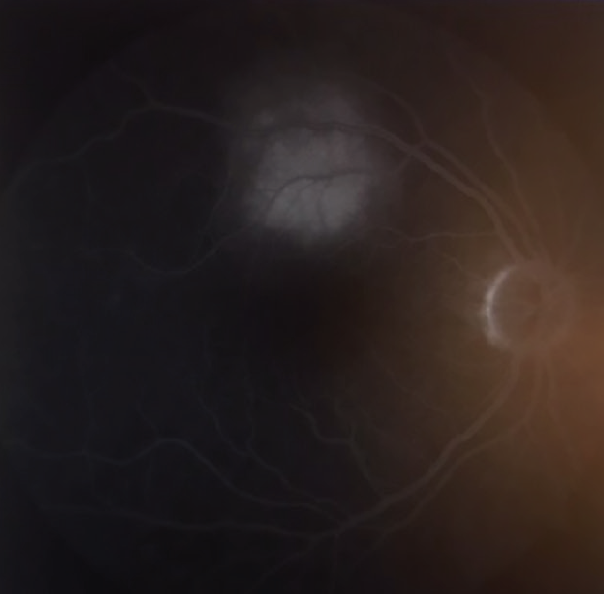 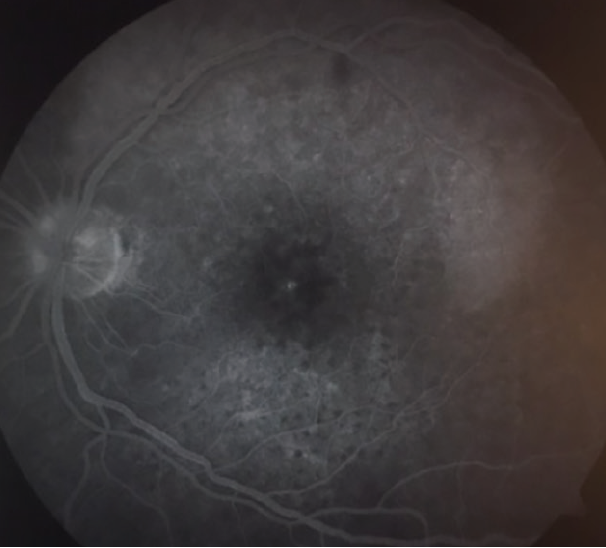 After the course of penicillin, the patient’s vision recovered and the rashes resolved. BCVA was 0.00 logMAR OD and 0.06 logMAR OS. Fundus examination showed no significant abnormality in either eye. OCT showed reduced irregularity and thickening of the RPE layer and a well-defined outer limiting membrane in each eye. There was complete resolution of SRF OD (Figures 8 and 9). 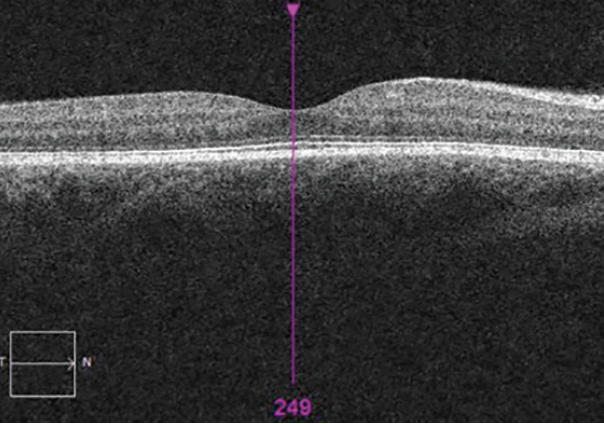 Figure 8. OCT showing reduced irregularity and thickening of the RPE layer and a well-defined outer limiting membrane OD. There was complete resolution of SRF. 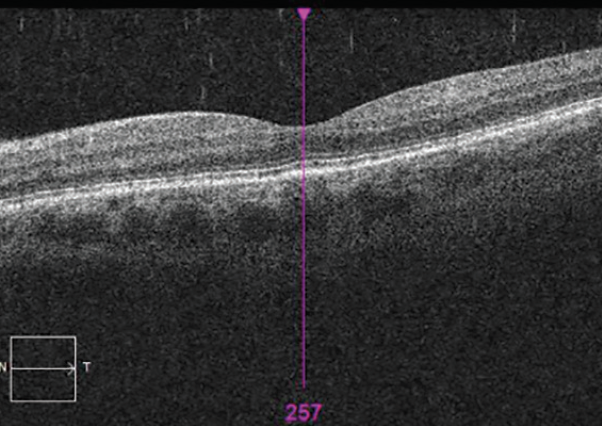 The British Ocular Syphilis Study reported findings in 63 eyes of 41 patients during a 2-year surveillance.8 Bilateral involvement was noted in 56% of patients. After treatment, mean VA improved, with 92.1% of eyes achieving VA of 0.3 logMAR or better. Average duration of symptoms was 1 month. Moradi et al, in a study including 61 eyes of 35 patients seen at a referral center, reported stable visual outcomes with treatment in 33.3% of eyes and deterioration of vision in 13% of eyes.9

In the case reported here, the patient presented within 3 days of onset of visual deterioration, and features of placoid retinal pigment epitheliopathy prompted a comprehensive set of investigations, resulting in rapid diagnosis and treatment. Prompt initiation of treatment may have played a role in the impressive visual recovery in this patient.